Pete Davidson has a puzzling yet undeniable charisma, but is he ready to be a movie star?

The comic appears in a new Netflix special and two new movies, one in which he plays a Pete Davidson-like character 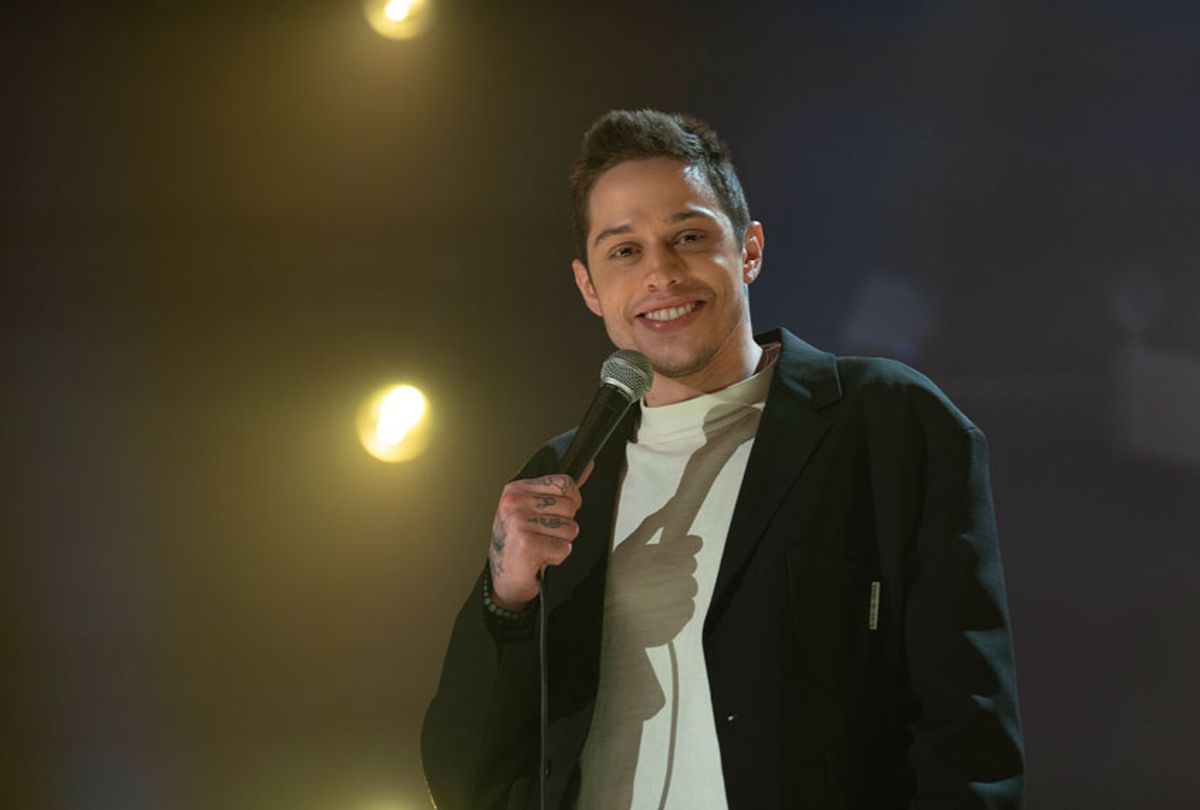 On a rare recent "Saturday Night Live" appearance earlier this month, Pete Davidson played very much to type as the object of interest to a pair of "Thirsty Cops." Looking about as comfortable as an accountant from Price Waterhouse at the Oscars, Davidson slumps in a sweatshirt under the leering gaze of a trio of horny law enforcement officers, culminating in Kate McKinnon's character describing him as a "little sweetie puppy dog bad boy, but bites." Never has the Pete Davidson brand been so well articulated — except maybe a moment later when Davidson himself shrugs, "To be honest, I didn't hate everything you said." Now, at a pivotal career moment for the 26-year-old comic, the question seems to be, is that the stuff that makes a movie star?

He certainly seems to be making a big swing at it. Davidson is in the midst of a very public attempt at transitioning to bigger things, with a new Netflix special, two new movies (he stars in one, has a supporting role in "Jesus Rolls"), and an extremely candid interview with Charlamagne tha God all dropping this week. Up next: this summer's autobiographical comedy "King of Staten Island" (directed by Judd Apatow), the title role in the upcoming animated "Marmaduke" and next year's "The Suicide Squad."

It's a seemingly golden period for a man whose life has been marked by some truly devastating low points. His father, a firefighter, died on 9/11. Davidson was just 7 years old; his mother has said he was so traumatized, he became a "lab rat"  for doctors studying the children whose parents lost their lives that day. He struggled with his mental health and suicidal ideation as a teen, and was diagnosed with Crohn's Disease. He also started doing stand-up, with his mother chauffeuring him around to clubs.

At 20, he became one of the youngest people ever cast on "Saturday Night Live," arriving with a flourish in an instantly buzzed about "Weekend Update" bit about how much money it would take for him to perform a sex act on a man. His combination of "resident young person" cred and seen-it-all world-weariness made him one of the show's biggest breakout stars in years, even if his lane was not an especially wide one. Davidson didn't arrive with a suitcase full of characters and funny voices like the teenaged Eddie Murphy had a generation earlier; he didn't have the relentless, anything for a laugh energy of a Will Ferrell or a Kristin Wiig. But his bleak, self-deprecating weirdness clicked. Most of his funniest moments over the years have been of just him gabbing on "Update," referring to himself as a "mentally ill community college dropout who got a 'Game of Thrones' tattoo before watching the show."

But he soon was making headlines for his personal life, including a whirlwind engagement and breakup with Ariana Grande, a disturbing flurry of Instagram posts culminating in a swiftly deleted declaration that "I really don't want to be on this earth any more."

"My rock bottom is when people are scared of my life, and I have to go away, and then I have to bring myself back up again," Davidson said in his conversation with Charlamagne tha God this week, in which he also referenced his stints in rehab and his relationships with actress Kate Beckinsale and model Kaia Gerber. But now, he says, "I want everyone to flourish and be great. Life is too short to just have like any bullsh*t with anybody."

Well, maybe. In "Alive from New York" — in which he correctly observes that Netflix is giving stand-up specials to everybody these days — he tosses grenades at every bridge behind him. He walks back his 2018 apology to Senator Dan Crenshaw, whom he referred to as "a hit man in a porno movie" on "SNL," and he goes all-in on Ariana, saying, "My career would be over tomorrow if I spray-painted myself brown and hopped on the cover of Vogue magazine and just started sh**ting on my ex." He also calls BS on his former fiancee's mythologizing of his now legendary equipment, taking the understandable stance that, "I don't like that she talked all the sh*t on behalf of my d*ck."

It's an often uneasy set, with Davidson wondering aloud about his role on "SNL" — "It's very minimal, the amount of stuff I get to do" — and making dark observations about the swimming pool his mother bought as a kind of condolence prize for the kids after his father died. Watching him, you want this guy to be okay. You don't however, exactly want to laugh. The jokes, about gropey gay guys and starving kids in Africa, feel more like the loose, offhand remarks of a guy hanging with his buddies after a breakup than a star who's been doing this for a decade. As a point of comparison, take a look at his early routine about farting contests and ask yourself if "Alive" feels like the work of someone who's grown as an artist.

His best moment comes right at the beginning, when he describes the time Louis C.K. tried to get him booted from "Saturday Night Live," and repeatedly describes the comic as someone who was important at the time. It's a pointedly timed bit, one that announces the transitory nature of relevance. But it's not exactly a ringing endorsement of a special to say that its selling point seems to be it's not the work of a sexual predator.

Davidson has a parallel moment early in "Big Time Adolescence." Playing Zeke, the soon to be ex-boyfriend of Mo's ("American Vandal's" Griffin Gluck) big sister, he declares his ambition to be an actor. To prove his talent, he then proceeds to pretend he's just learned his dog has died. It's an oddly meta scene, as if Davidson the actor playing Zeke the actor wants to demonstrate his range for us.

But the selling point of the film, unquestionably, is that Davidson is playing a Davidson type. Zeke is a tattooed college dropout with an avuncular pleasantness and a bafflingly selective charisma. Sweet, troubled, and as reckless as he is well-meaning, the character does not seem a terrific stretch for the man playing him. Instead he seems a lot like his blasé "SNL" persona Chad, stretched out to 90 often excruciating minutes of uttering "Sick," "Dope," and "Oh damn."

In recent years, Davidson has done some really fun, scene-stealing work in movies like "Set It Up" and "What Men Want;" he looks most at ease when he's going big in a smaller role. So where's that guy now? Does he even want all this? Because he doesn't appear to be trying all that hard.

Davidson has undeniable appeal, a gangly weirdness that is entirely his own. Yet he's also a draw for fans who – as Heidi Gardner's teen movie critic Bailey Gismet once said of the Joker, "like, think I could help him." And that's a strange dynamic for any performer and his audience.

Davidson riffed on his image again this week in the promo for the upcoming episode of "SNL," hosted John Mulaney. In a clip reminiscent of the beginning of "Her Smell," Davidson appears to be serenely meditating in his dressing room with his guru, having recently let go of his bad habits as well as his pet monkeys. But he then dons his "hood rat gear," promising Mulaney he'll "give the people what they want" and "act real stupid."

In his interview with Charlamagne tha God this week, Davidson said of the show, "If I'm just fodder now, maybe I just shouldn't be there. They think I'm f•••ing dumb. Like, I'm literally painted out to be this big, dumb idiot."

Davidson is no dummy, he just genuinely seems to have painted himself into a unique corner after becoming famous for acting like a doof. Each recent career move seems to be the action of a man ready for you to take him seriously, unless you don't, in which case, just kidding! "When I'm done with this show, I'm just going to be sitting around waiting for Tosh to retire," he cracked on "Weekend Update" just two months ago.

No doubt some of the cause for the mixed messages stems from the mental health issues Davidson's been admirably public about. They also however carry a whiff of a very bankable, very vulnerable product being peddled in a manner that even he seems unprepared for. That's not a bunch of laughs to watch; it's actually sad and scary. And having just recently emerged from what he described in December as "the kind of vacation where they take your phone and shoelaces," it's worth asking who, including Pete Davidson, is enjoying Pete Davidson right now.