A trio of "Drag Race" vets take on small town USA in a series where "the gag is, we all need help" 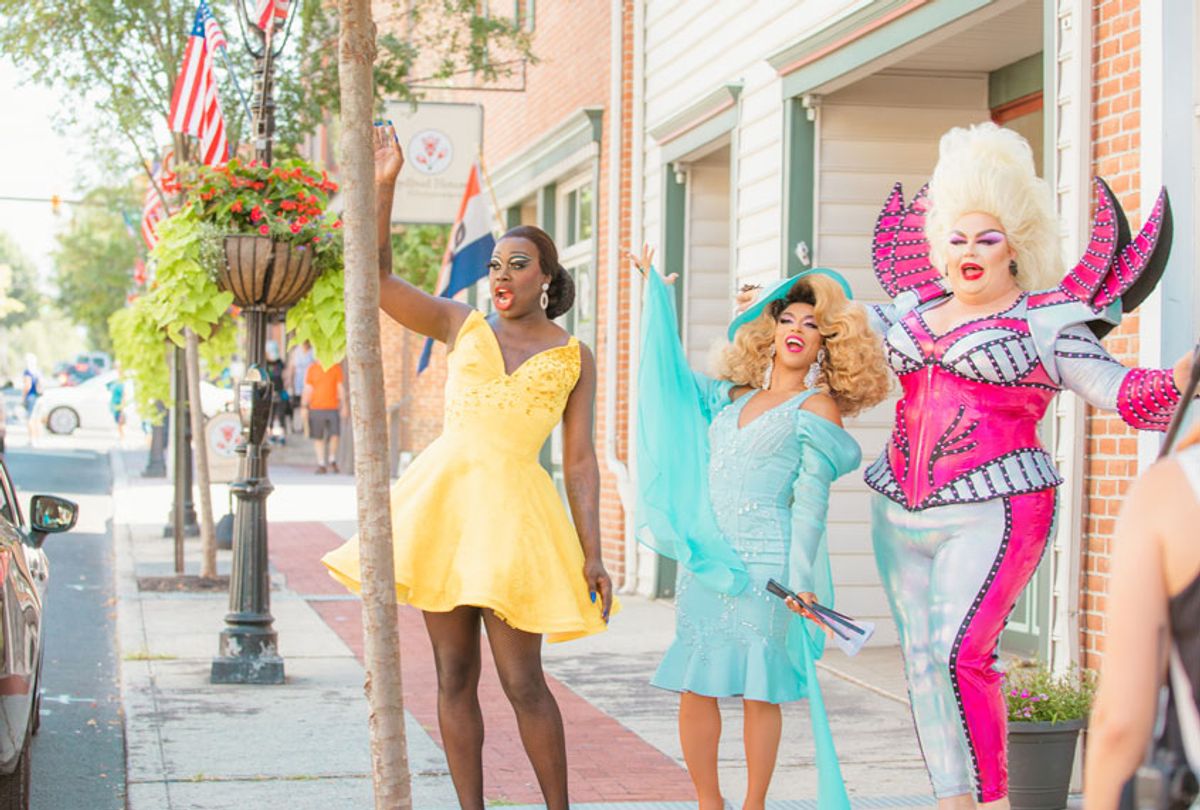 "We're here" is the start of a declaration, one that famously continues, "We're queer. Get used to it." It's a rallying cry, born in the midst of a devastating epidemic. Popularized by Queer Nation at the height of the AIDS crisis, it's a message both celebratory and serious. The same defiant blend of joy and tears also propels the new reality series "We're Here," a broad-ranging, remarkably relevant plea for love and respect. Because what we need right now are some drag queens to help us reach across the aisle and find some all-American common ground.

The premise of "We're Here," which premieres April 23 on HBO, may lull you into thinking you've got it all figured out before you've even watched a minute. In each episode, "RuPaul's Drag Race" veterans Bob the Drag Queen, Eureka O'Hara and Shangela Laquifa Wadle roll into a small town in their full regalia, set up shop for a few days and train a group of new local drag daughters to stage a special performance. If it sounds like "Queer Eye," but make it drag and make it MAGA states, well, it is. It also has a way of upending expectations that even the Fab Five never did.

In the first three episodes, the trio takes over Gettysburg, Pennsylvania; Twin Falls, Idaho; and Branson, Missouri, where they encounter their fair share of confused looks and not so thinly-veiled hostility. They work with people you might imagine as candidates for a show like this. There's Hunter, for example, a makeup artist longing to break out of his small town who says he feels like he's carrying a weighted backpack all the time. But they also mentor Brandon and Mikayla, a trans man and his wife. They work with Tanner, a young man whose recent embrace of Christianity has made him renounce his queer identity. "I had to go the Bible route," he tells Bob, adding, "It's something I struggle with on a daily basis." They also mentor Tanner's concerned mom.

They work with straight people who are allies, and with ones who are trying to unlearn their homophobia. And at every stop, they both show and see that America isn't neatly and furiously red or blue. Yes, a local may call the cops at the first sight of men in heels, but another will gush in recognition when someone from "Drag Race" saunters through the door. Some of the townspeople may express reluctance to attend a drag show, but honestly, wasn't it a tough sell to get your parents to even go to a restaurant before the stay at home orders began? Likewise, maybe a mom will find herself estranged from her daughter after the girl comes out. But maybe a trucker hat-wearing grandpa will reply, when invited to his grandson's drag performance, "You couldn't keep me away. Whatever he wants to do, I'm all for it." I think my favorite moment in the whole show may come from the nonchalant man on the street who, when asked how large the gay population in his community is, pauses a moment before estimating the town is probably about half and half.

There is no question that ours is still a nation dangerously hostile to people of color and members of the LGBTQ community. Many of individuals in "We're Here" have experienced deep pain and isolation simply for being who they are, and the series never shies away from that brutal truth. "Sometimes even suicidal thoughts go through my head… There's always a lonely sense of being in me," Twin Falls drag performer Michael admits through tears.

Visibility may be greater than ever now that even the rural diner has a drag brunch, but hate crimes sure keep spiking. Ground gained still has to constantly be fought for, and it's a no-brainer that those battles are rougher in places marked by deep conservatism and fundamental Christianity.

It's also true that plenty of us who live in our reassuring liberal echo chambers have our own sweeping generalizations about places that don't have a kombucha- and pilates-driven economy. So know this — "We're Here" isn't a show about some fabulous drag queens sashaying into a dreary Palookaville, dusting it in glitter and teaching a bunch of hicks a thing or two. If you think that's the message, check your own preconceived notions. Wasn't the whole original point of the phrase "we're here" to announce not arrival, but existence?

It's definitely visually striking to contrast the rhinestone encrusted glamour of Bob, Eureka and Shangela against the folksy backgrounds of the towns they visit, but scratch the surface — preferably with a sharp, lipstick-red nail — and you'll see the glorious beauty in so many of the people already living there. When Bob observes that "it takes a village to make a queen," it's a statement that acknowledges that truth: Progress doesn't just happen because a bunch of outsiders are introduced into an ecosystem. Things move forward when parents — Christian and atheist, gay and straight, on every point along the gender, political and mental health spectrums — stand beside their kids (likewise), and communities acknowledge and respect their own members. They happen when a person's family of choice loves them exuberantly and unconditionally and playfully, especially in the hardest times. After all, if every marginalized community waited until everything was fixed and safe and all good for them to celebrate, we'd have no parties. And even if not everybody wants to come, the magic still happens when everybody is welcome.

The training for the drag children — with their varying levels of technical skill and comfort with a duct-taped tuck — is perhaps the least engrossing aspect of the series. Where it shines is in the dynamic of the heartfelt, humane stories and the extravagant performances. Each episode goes in with the understanding that you might not change minds determined to stay closed, but most people can at least get behind a disco-era banger.

Watching "We're Here" right now feels about as strange as watching anything else created pre-coronavirus; depending on how your toilet paper buying excursion went this morning, just the sight of happy crowds dancing and hugging may be enough to set off a nice long ugly cry sesh. On a deeper level, it's a show about loving — truly loving — your neighbor.  We've learned that in a million new ways these past few weeks. "Asking for help is hard," one of the queens explains, "but the gag is, we all need help." And that's not something shameful. It's something to celebrate, and dance to. Get used to it.