So much for the "safe" choice: Hey, Democrats — you could have picked a woman

Warren, Klobuchar, Harris and others all flamed out because voters feared women weren't "electable." Whoops! 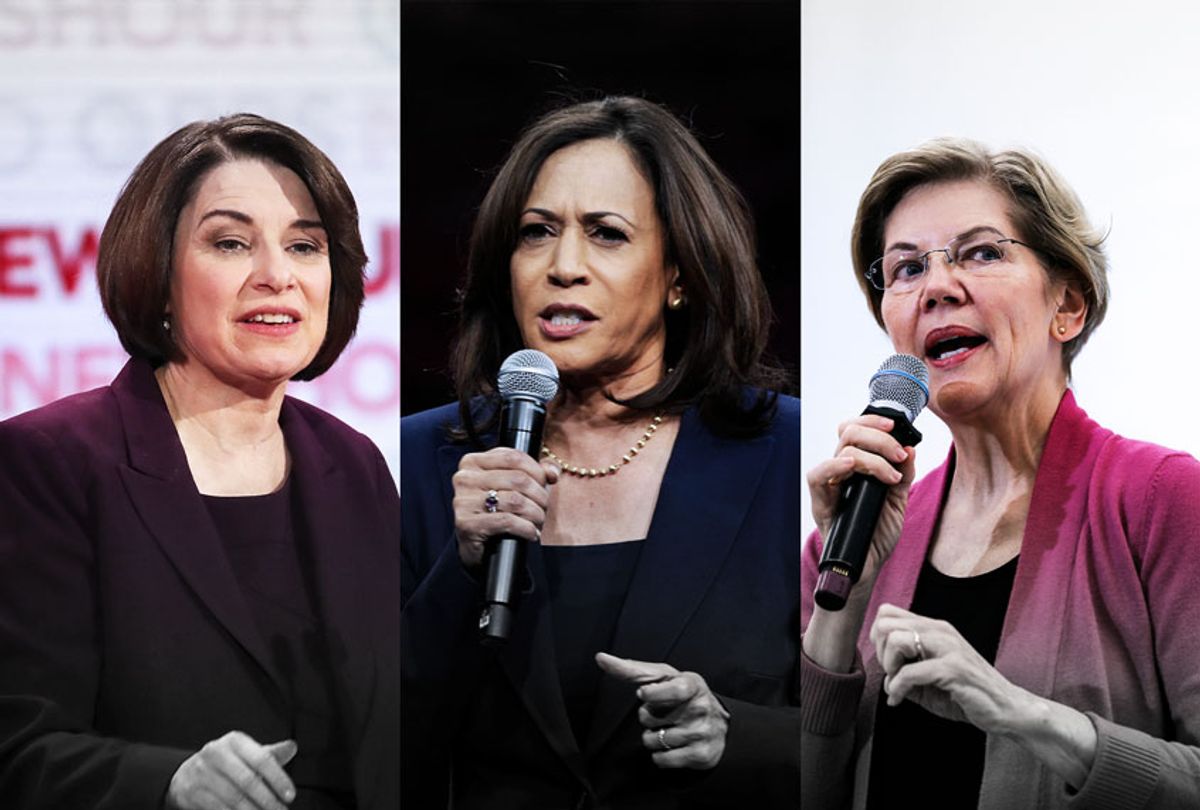 The 2020 Democratic presidential primary race started out as the most diverse in American history: Multiple women, multiple candidates of color and even the first significant gay candidate. For a while, it even seemed like one of those candidates who didn't fit the typical straight-white-guy male might win. Sen. Kamala Harris of California opened her campaign with a huge rally on MLK Day in 2019 that created a lot of buzz. Sen. Elizabeth Warren of Massachusetts, bolstered by a series of strong debate performances, overtook Joe Biden and led the polls in late summer and fall. When primary voting started, both former South Bend, Indiana, mayor Pete Buttigieg and Sen. Amy Klobuchar of Minnesota did better than expected, creating at least a momentary sense that either one could win.

And then South Carolina and Super Tuesday happened at the beginning of March, and boom! It was over. The field was cleared except for two straight white men, both over age 75, former Vice President Joe Biden and Sen. Bernie Sanders of Vermont. (And even that contest was over almost as soon as it began.)

While there was a lot of chin-scratching and debate over how and why, exactly, that happened, for those who actually talked to ordinary Democratic voters on a regular basis, there was no mystery: Voters believed that only a man, especially a straight white man, was "electable."

Indeed, that was by far the most pervasive narrative, especially among ordinary voters, in the 2020 Democratic race. Large numbers of Democratic voters were deeply traumatized after the uniquely unfit Donald Trump beat the eminently qualified Hillary Clinton in 2020. (Even though Clinton got more votes and Trump's victory could be understood as an improbable statistical anomaly.) They concluded that the only candidate who could beat Trump had to be a dude, ideally of the most white-bread, inoffensive variety.

Now the supposedly "safe" candidate, Joe Biden, is the prospective Democratic nominee. And now those voters who backed him by an overwhelming margin are watching that "safe" candidate on cable news, struggling to respond to allegations that he sexually assaulted a member of his U.S. Senate staff in 1993.

Some Democratic voters believe Biden, who says that "unequivocally, it never, ever happened." Some believe his accuser, Tara Reade, who has offered a specific, detailed and disturbing account of what she says Biden did, with at least some corroborating evidence. Some, despite the pressure to always have a hot take in every situation, don't know what to believe. But wherever one falls on this spectrum, you have to admit: This is a terrible situation. Barring developments that either disprove Reade's allegations or force Biden to drop out, this is going to be a defining issue in the race.

I have to point out the obvious: This situation could have been avoided entirely by nominating someone else. Perhaps, just for argument's sake, a woman.

Say whatever you like about how you find women "unlikable" or "shrill" — or believe others view them that way — but one thing is certain: If your goal is to play it safe, nominating a woman is pretty much bulletproof insurance against what are euphemistically called "#MeToo problems."

At the risk of aggravating my already severe Cassandra syndrome, I am going to point out that I told you so. During the primary, I wrote a series of articles — and even provided a quote to Washington Post reporters — about how Biden's "electability" was an illusion. The very qualities that made him seem "safe," I argued, could just as easily tank his chances.

Biden has a history of racially insensitive remarks, a long record of policy positions well to the right of most current Democrats, and a discernible streak of sexism. He formerly opposed abortion rights and has always been reluctant to embrace pro-choice policies. He has often been publicly condescending to women, with Anita Hill the most famous example but far from the only one. I suspect a lot Democratic voters convinced themselves that Biden's "moderate" history made him more electable, on the grounds that he maybe he could chip off some of those Trump-voting Midwestern working-class white voters who have been the objects of such media fascination for the past three and a half years.

But my fear, which I hammered at repeatedly and then dropped — because I was starting to sound like a broken record — was that Trump would be able to run a "both sides suck, so don't bother voting" campaign against Biden, using some of the former veep's past statements and policy positions to demoralize progressives and convince them to stay home.

I was way, way more correct than I could ever have imagined. Trump's campaign has been hyping the hell out of Reade's accusation against Biden. Brad Parscale is having trouble wiping the drool off his chin. It's only a matter of time before Trump himself picks up the baton.

Obviously, the Trump team is not doing this because they care about women or about fighting sexual assault. Trump himself is a confessed sexual predator who has been accused by more than a dozen women of everything from forced kissing to rape. No, the Trump campaign is just delighted it gets the chance to undermine any effort to draw a contrast between the two candidates on the issue of sexual assault.

Make no mistake: This is critical for Trump. His history of admitted or alleged sexual misconduct has been a major organizing point for his opposition. The 2017 Women's March, the biggest protest in American history, was fueled in no small part by women's outrage over Trump's record. The 2018 "blue wave" in the midterm elections was also due, in large part, to massive turnout by women angry about Brett Kavanaugh's confirmation hearings. But now the Trump campaign is prepared to argue — to be blunt about it — that since both candidates are pussy-grabbers, there's no point in all those ladies bothering to vote.

In light of this, it's hard not to reach the genius-brain conclusion that if Democrats seriously wanted to play it safe, they would have nominated a woman. The chances of a #MeToo scandal happening with a female candidate, while not zero, are close enough that the number can safely be rounded down to zero.

I know that doesn't seem fair! After all, most of the other male candidates previously in the race, including Sanders and Buttigieg and Sen. Cory Booker of New Jersey and Gov. Jay Inslee of Washington, seem like nice guys. There isn't even a whisper of a hint that they have any problems in the #MeToo department.

Well, sure. But it's also not fair that Elizabeth Warren lost, even though there are plenty of reasons to argue that she was the best candidate. That was also unfair, but Warren supporters were told that they had to suck up the unfairness because it was too risky to run a woman against Donald Trump.

Risk is a funny thing that way. Everyone was so busy worrying about the risk that voters were too sexist to elect a woman that they refused to consider the other side of the coin: Male candidates come with their own gender-specific set of risks. That's the problem with making risk-avoidance your sole criterion for choosing a candidate. It's impossible to account for all the possible risks out there, or to predict how your supposed caution may come back around and bite you in the ass. Sometimes the candidate you pick as the safe choice turns out not to have been safe at all.