In juicy thriller "Inheritance," Lily Collins is a woman who can't escape her father's dark legacy

The actress spoke to Salon about her new film and forging her own path away from her father, Phil Collins 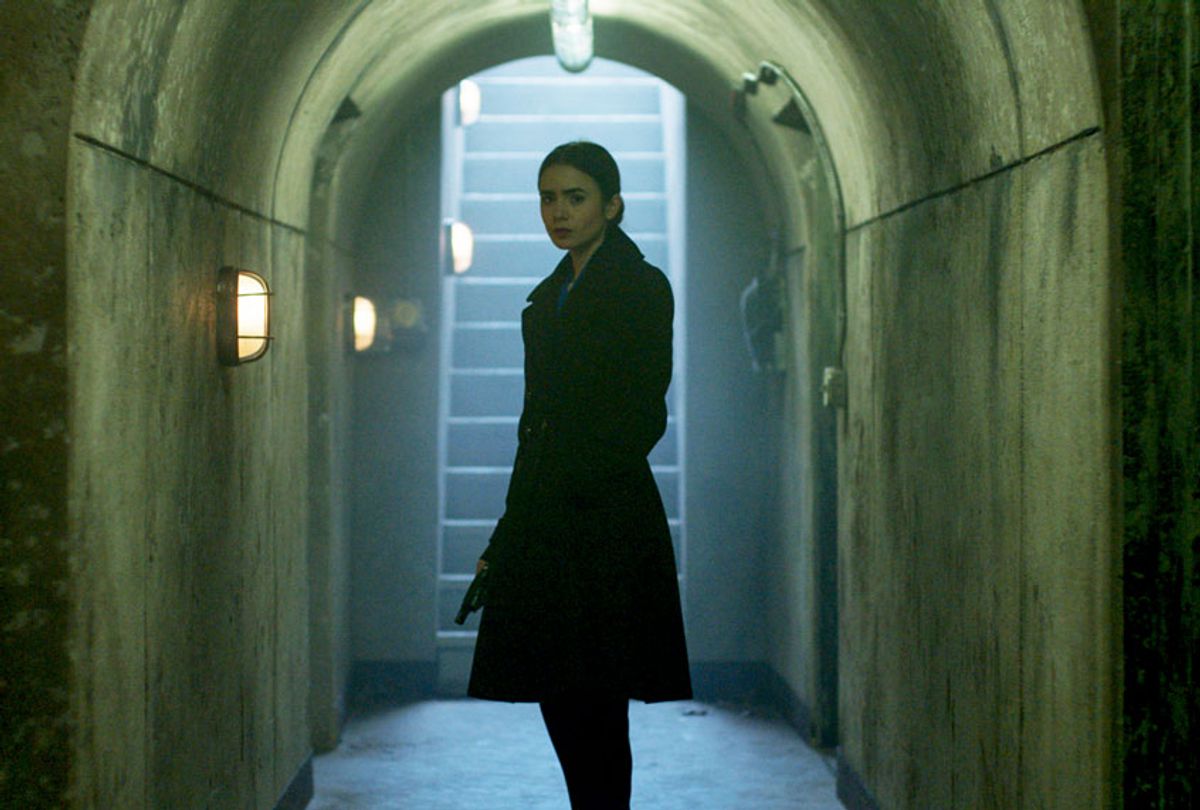 Among the many movies available to stream in May comes the juicy dramatic thriller "Inheritance," in which Lauren (Lily Collins) is the New York district attorney whose wealthy father dies in the pre-title sequence. Her Congressman brother William (Chace Crawford), who is running for re-election, inherits tens of millions of dollars, while Lauren gets a paltry $1 million, a key, and a flash drive. On the device is a video that leads Lauren to meet Morgan (Simon Pegg in a fabulous, scenery-chewing performance) who is primed to spill some dark family secrets. "Inheritance" is less a "Knives Out" whodunnit and more akin to "Parasite," where the "perfect family" may be toppled by the anxious outsider.

Collins, daughter of oft-maligned musician Phil Collins, shows her moxie in this role after appearing as a woman with anorexia in "To the Bone;" in the recent biopic "Tolkien;" and in the series "The Last Tycoon" and PBS' "Les Miserables." What makes Collins so engaging here is watching Lauren make a series of difficult — and possibly wrongheaded decisions — as she quickly gets in over her head with her "inheritance." As Lauren grapples with issue of truth and trust, her behavior and her thinking are greatly affected, and Collins is fun to watch as Lauren recalibrates and responds to what she discovers.

The actress chatted with Salon about her family, her new film, and what gives her life meaning and purpose.

Lauren is told she is not allowed to be average. She may have a rebellious streak, but she is certainly an overachiever. How did you identify with her pressure to succeed on her own terms?

She is the youngest district attorney, and there's a level of expectation she has put on herself. Other people are not expecting much of her. They have preconceived ideas on how she got to where she is. I've been super-passionate and forging my own path with my family background, so I can associate that with her background. People know who her family is, and she wants to rise to the occasion and do her own thing. I could understand the rollercoaster of emotions she goes through pursuing what she's doing and being her own best and worst critic. She is driven to be successful on her own. This is a different role for me, and the level of expectation with that was fun to play with as well.

There is a sense that Lauren is naïve. And it can be argued that she becomes disillusioned over the course of the film. What drives her to question what she knows or believes, and how do you process her denial?

How can she be so surprised by what she learns? I knew that with her being the DA — that she does this for a living — that she should know better [as various facts come to light]. But we can relate to the level of logic that comes into play when personal experience and family [collide] with our jobs. That logic goes out the door. We think, "It couldn't happen to me." Her personal involvement creates more emotional investment. She tries to be logical, but the more things unfold, the more she realizes this [situation] is possible and there are greater things at stake. But being prim and proper with all eyes on you, as Lauren is, she has to not allowed her emotions to get in way of her job. I don't think she comes across as naïve, but when you think you know something all your life and be told it's not true, we would all react in a way that's totally not logical on paper.

There are several characters in "Inheritance" that tell Lauren that her father was proud of her, but she seems to think otherwise. Can you talk about your relationship with your father? He too, acted in movies, such as "Buster."

He was an actor and loved the stage. He started out in "Oliver" in the West End. His love of creativity is evidenced in his music videos. He's proud — as is my mom — of my career and the choices I've made, which is nice. He enjoys my continuing that acting bug he had. Now I get to step outside the box and do all sorts of different things and express myself creatively.

Lauren faces a difficult moral decision in the film and has to decide between protecting her family and having a clear conscience by doing something just. Do you agree with her decisions? She does place herself at risk more than a few times!

She does place herself at risk! There are elements to her that she wants to be different from her dad, but she's more like him. She hears [a rumor] about her brother's election and says that can't be true. Then she makes some questionable decisions herself. She looks at what she does and wonders, "Did I do the right thing?" When you make decisions on your own, you realize how much like your parents you are. And this situation she's in, she's in emotional turmoil. I don't know that I'd make the same decisions, but she feels she's getting to the bottom of it. She is not aware of what happened in that part of her [family's] history. As she continues learning about her past she gets thrown by things. She tries to take it one step at a time while also dealing with a high level of stress at work. I would have gone a little crazy before she did!

Morgan describes Lauren's father's vices as poker, ego, and women. Lauren used to bite her nails. What vices do you have?

Biting my nails is not something I would l do. Vices are considered bad things. I've been trying in this quarantine to get rid of vices. My bad habit is that I love reality TV — not all reality TV, but I constantly watch Bravo and binge those shows and then I have nothing to watch. I also watch crime thrillers before bed and then I have nightmares.

There are several moments were Lauren carries a gun. How are you with firearms?

I had to train for this movie because Lauren has had to deal with firearms in her history and I needed to know how to handle one. They took me with a stunt coordinator to practice at a range in Alabama. It was incredibly safe. But it is not something that I feel comfortable doing.

Lauren is often described as a good person. She is trying to be just and fight against evil with her integrity. What gives your life meaning and purpose?

Life experience and adventure and travel provide me with joy as I learn from what's around me. I'm experience driven. I believe in making yourself more rounded and learning as much as you can. When we all understand we are not alone, that takes a little stress away. I've always loved, even as a young kid, to encourage my friends and others that what you are going through, you don't have to feel alone. We have the same emotions. In this time of quarantine and being separated and isolated, I try to reach out with the GO Campaign and WE to say we are not alone. To not put a stigma on mental health issues and remind ourselves that we can be centered and stable and united in this super-disconnected period. Though charity work, I found myself surrounded by amazing and supportive friends.

Do you have any big dark secrets we should know about?

That would be a short answer.

"Inheritance" is available on digital and VOD on Friday, May 22.