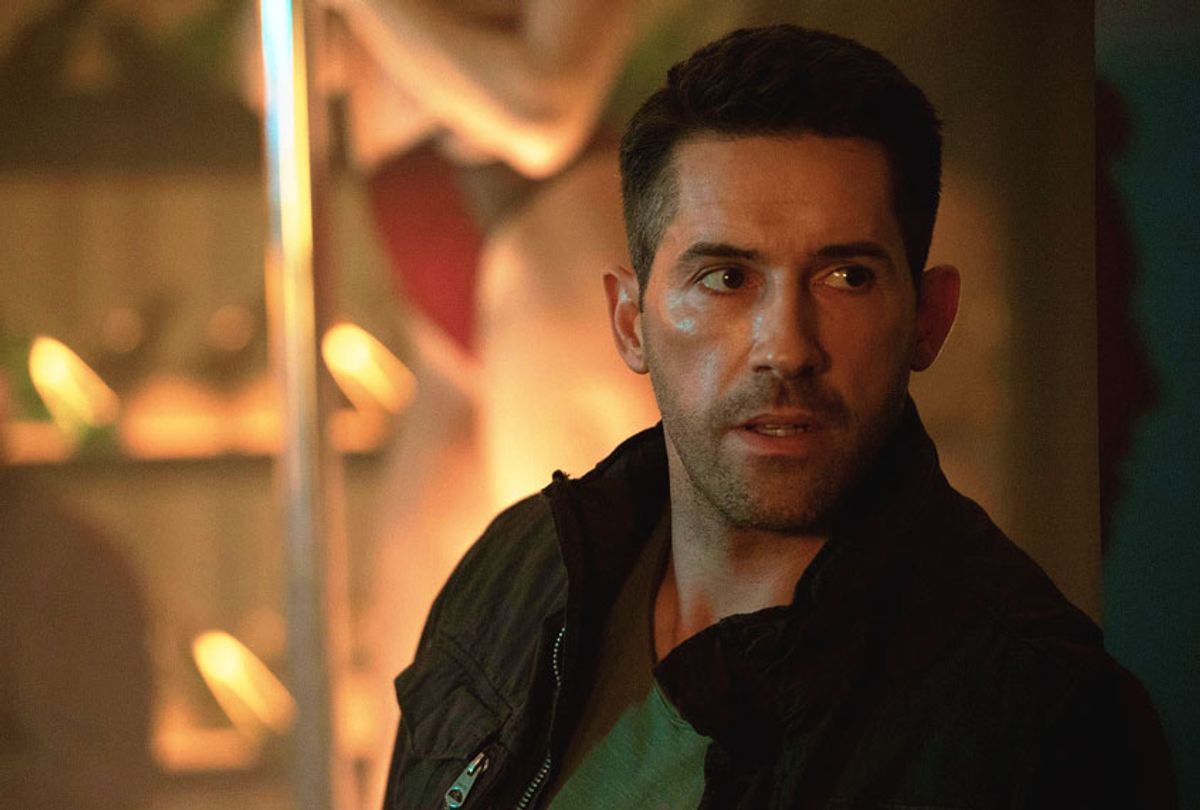 Action hero Scott Adkins has been busy — he has made four films since chatting a year ago about his action flick "Avengement." He continues to play to his fanbase, starring in enjoyable, bone-crunching B-movies. But despite a supporting role a few years ago in "Doctor Strange," Hollywood continues to elude him.

His latest effort, "Debt Collectors," getting a theatrical and VOD release on May 29, is a sequel to his 2018 film, "The Debt Collector," (one of the many movies available on Netflix). The film reteams him with co-star Louis Mandylor (of "My Big Fat Greek Wedding" fame) for more mayhem. Nevermind that both characters were shot and left for dead in the first one; they miraculously recovered for this diverting sequel.

Adkins is French — not "Frenchie" — the muscle who reluctantly agrees to assist Sue (Mandylor) with collecting payments from deadbeats for their boss, Tommy (Vladimir Kulich). The guys have to complete three "vigs" (collections) in two days, which, of course, is not as easy as it sounds, especially when they have to drive from L.A. to Las Vegas and back to chase down some money. But despite the trouble they encounter on the way, the jokey camaraderie between French and Sue soon gets fraught, culminating in an extended, knock-down, drag-out fight in an alley.

Adkins isn't someone to mess with, and while he has fewer action scenes in this outing, "Debt Collectors" will tide fans over while they wait for his next film, "Legacy of Lies," a spy thriller coming out on VOD and DVD on July 28.

Adkins talked with Salon about his new film, his fighting style, the difficulty of being an action star, and the worst job he ever had.

What prompted a sequel to "Debt Collector?" The characters in the first film, French and Sue, were pretty much shot and left for dead.

Yes, the bullet comes through my heart and out my back. The original script was great, but my idea, when I came on board, was to make it more of a buddy film. Jesse [Johnson, the director] and I saw "The Nice Guys" and we wanted to make "The Debt Collector" more like that. It was my idea to have French's first day — so "Training Day" meets "The Nice Guys." The end [of the first film] was what was in the original [script]. If we had to do it again, I would have changed the ending. I kept thinking we should have ended it differently. I wanted to do something else with Louis, so I went to the producer to say the injuries were not as bad as they seem. If the audience goes along for it, it will be OK.

French gets into a bar fight in the opening scene. What is your breaking point where people piss you off and you have to resort to fisticuffs?

I never lose my temper enough to start a fight. I've finished a few fights, but I never start fights. I'll lose [my temper] on set. A film set is a pressure cooker. There's never enough time and money, we're in confined spaces, and not sleeping enough. But I'd never hit anyone unless they hit me first.

One of your fight scenes is in a boxing ring. You're more of a Mixed martial arts (MMA) fighter. Can you talk about your different fighting styles and getting in the ring?

That was what was fun about that scene. French and Sue have a running thing — he thinks boxing is better than MMA. I'm an MMA guy. So I'm going to take out a boxing guy. MMA guys have so many tools. We have to box in that situation to get the cash — Sue's the boxer, but then it's French's go, and he won't do as well against a boxer. So, he resorts to MMA. I come from martial arts — kickboxing, taekwondo, and the striking aspects. I enjoyed the UFC [Ultimate Fighting Championship]. But then it became wrestlers lying on the floor hugging each other. Then everyone got good at wrestling, and it was more takedowns and MMA style. It got really interesting. At one point, it was just grappling. I enjoy watching martial arts and kickboxing. But I like boxing as well.

How many hours/days a week do you train to keep in shape?

Not enough, and in this lockdown, my diet's gone to hell. Normally it's six times a week lifting weights, martial arts, or some cardio.

"Debt Collectors" features a lengthy brawl between French and Sue that is reminiscent of that fight scene in "They Live." I really wanted you to kick Louis's annoying ass. Sue is nothing but trouble for French. What can you say about the dynamic between you and your co-star? You spar verbally and physically.

That fight scene was more than a homage, it was more like a straight rip-off! I'm a huge fan of Roddy Piper and Keith David in "They Live." When we were figuring out this relationship between Sue and French, which was so tumultuous, we knew it would come to blows. We made it over the bag of money, not the shades. It was coming, our fight, our characters were ripping each other. We filmed it in an alley in August in the valley in L.A. "They Live" had shade for their fight scene. We were in the baking sun for two days. I ended up on a drip from dehydration. I shouldn't have worn the leather jacket. I had two bags of saline and then had to go finish the fight. My face blew up from saline. It's not easy being an action star!

I know you hate doing green screen work. How much of a hand do you have in choreographing the action scenes? Are you being more selective with stunt work?

I'm physical and I can do it, so why not show it? We had some bad luck. The sequence chasing the kid was going to be more elaborate, but I pulled my hamstring. I must be getting old.

Have you ever had an injury that made you rethink this job?

It's when you're not concentrating that accidents happen. Big stunts require concentration and being in the moment. But when you're not thinking, you hurt yourself. You have to fight through injury. I pulled my hamstring and then had to do the boxing fight scene, which was with fists. But then I had the [alley] fight with Louis. You just have to get on with it. That's why I like working with Jesse – he has a strong work ethic. He's a grafter.

French is told to have a moral compass to do this work. But there are double-crosses. How do you approach a character who tries to do the right thing but gets screwed in the process?

What was interesting in this film is that French is the moral compass in the first film, and Sue's character doesn't have one. In the first film, French, because he has morals, convinces Sue not to mess up a guy who has a kid. What happens is they end up getting shot. Going into the sequel, Sue's character comes back philosophical. It's been a learning process, and his moral compass is reset. My character, French, regrets the choice of doing the right thing. He was almost killed, lost his gym, and is hiding out and bitter. So, it's flipped. French has a chip on his shoulder. He's nastier and cheats in the ring. Sue's more the moral central. I wanted to make it interesting and not play the same character. You hope it works and the audience will like my character, but we took a risk. I'm no stranger to playing dislikable characters. But with these characters, that you are not sure if they are good or bad, are more interesting to play.

I was still rooting for French even when he was a bit of a dick.

Bruce Willis is a dick as John McClane, or in "The Last Boy Scout," but you enjoy him being a dick.

French refers to his debt collection work as "the sh**tiest job he's ever had in his life." What is the worst job you've had?

I had a real shit job when I was living in London, and not getting acting work. I'd gone to a temp agency and the first job they put me on — I didn't want to walk away because it was my first job — I had to drive around in a van and go into High Street shops and ask the ladies for their sanitary buckets and dispose of them. I stuck it out for the day, and that was it.

"Debt Collectors" is another film you executive produced. Are you taking more control over your career these days?

Yeah, and it's much better that way. The films where I have more creative control are better, "Boyka" aside. There is more comedy, and we bring Stu [Small, the co-writer] on to write dialogue and story.

I really want to see you do a detective film, or a film noir. I could easily see you a Bogart role. Any chance?

I think Jesse would like that, to make a modern "Maltese Falcon."

What about romance? I don't think you ever gotten the girl in a film.

I avoid it because I don't want to come home and have my wife beat me up.

Will there be a "Debt Collectors 3?"

We'll have to see how this one goes. I had a great idea for it though. I'd love to bring these two rough-edge characters who bicker all the time and meet colorful nefarious characters back because they work so well together.

"Debt Collectors" is available in select theaters and VOD on Friday, May 29.