To counter viral videos of police brutality, police around the US have started ad campaigns on social media sites 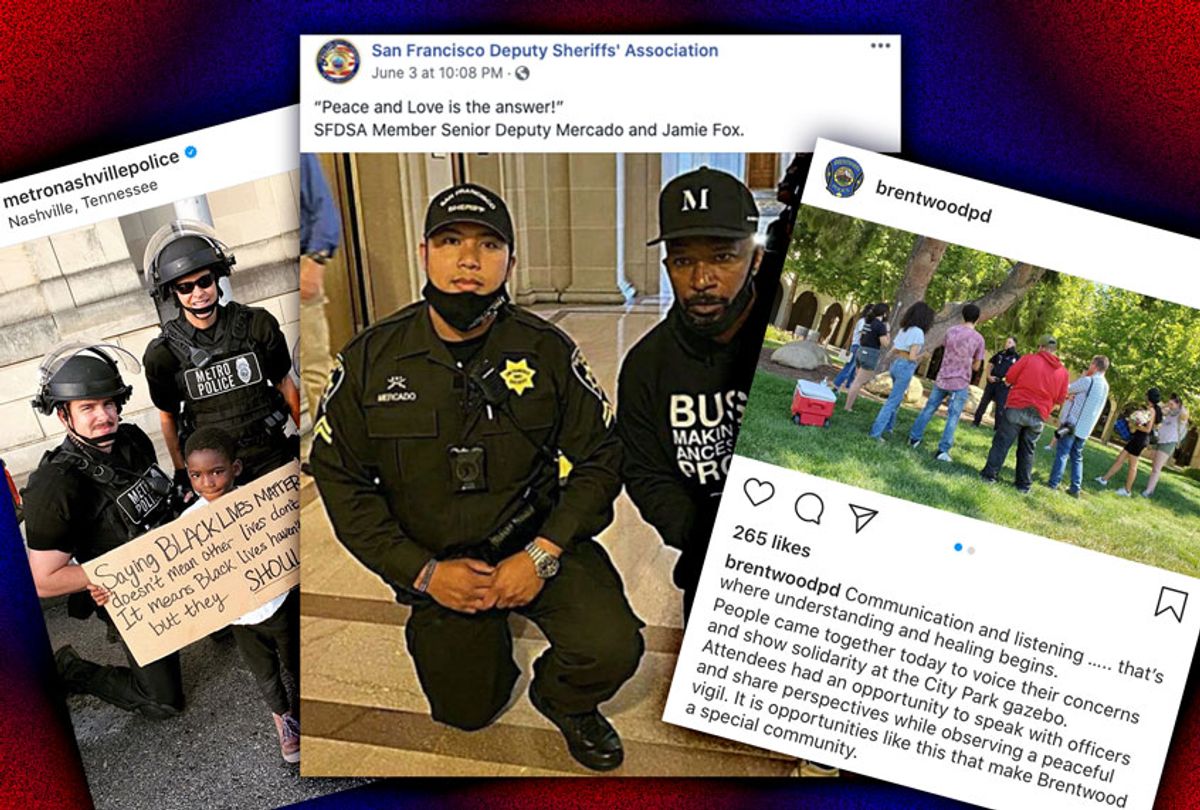 Yet since the emergence of nationwide anti-police protests prompted by George Floyd's murder at the hands of the Minneapolis Police Department, police departments and associations have begun wielding social media platforms to their own ends, attempting to co-opt the conversation and spread positive propaganda about police. In many cases, police forces have paid for promoted campaigns on sites like Twitter and Instagram, in a vain attempt to counteract the newly-dominant narrative about policing.

On Instagram, multiple police forces have posted videos suggesting that they are either the victims, or trying to depict themselves as peacefully supporting protesters' right to assembly. New York Police Department (NYPD) Chief Terence Monahan addressed protesters in an Instagram video calling for an end to the protests. "The only path forward is together," the caption read.

In Chicago, where the president of the city's police review board, Ghian Foreman, was hit with a baton by a police officer at a protest, the Chicago Police Department's (CPD) Instagram and Twitter tell a different story, in which followers are to believe that the police walk peacefully side-by-side with protesters. One typical CPD Instagram post features a caption reading "our officers remain professional on the forefront of protest," contradicting reports of police violence in Chicago.

In Nashville, Tennessee, police officers posed on Instagram with a child holding a Black Lives Matter sign. Austin, Texas' police department posted, on Instagram and Twitter, photos of "a large batch of letters and cards with kind words" that they purported to have received. Twitter commentators were quick to point out that the handwriting on all the envelopes was the same; a Gizmodo reporter reached out to Austin police about this curiosity, who explained that "the cards were from several community members to include kindergartners and Austin families, who wanted to show support for APD officers. Two people, who organized delivering the cards in person, addressed the envelopes with a 'Thank You.'"

The reporter followed up by asking how that was possible if schools were closed. "We don't know what school or what kindergarteners," the police officer spokesperson said.

The emergent social media PR campaign on behalf of the nation's police appears to be a concerted effort to reclaim and redirect the digital narrative about policing, and the character of police officers. As my colleague Sophia Tesfaye wrote, these feel-good images — particularly the pictures of police officers taking a knee with protesters — are a type of "performative solidarity" that is often too quickly highlighted by the corporate media outlets, thus allowing the police to control the media narrative without context or critical thinking. Certainly many media outlets have advanced this propaganda narrative, but it starts with social media platforms — which are now comparable to the major broadcast TV networks of the mid-twentieth century in terms of their consolidated power to shape public opinion.

Hence, as brands have turned to social media to manage their public image, so have police departments. According to a 2013 social media survey by the International Association of Chiefs of Police, 96 percent of police departments use social media. Specifically, 73 percent of agencies surveyed said using it helped improve police-community relationships. An article in trade publication Police Chief Magazine also suggests that social media can be "a tool to have more positive interactions with the press."

Regionally, previous instances of police misconduct have been followed by social media propaganda by said agencies. As reported by The Nation, the Baltimore Police Department used social media to reshape public opinion during the 2015 Baltimore uprising after Freddie Gray, an unarmed 25-year-old black man, died due to police brutality. The same year, videos of police officers lip syncing to Taylor Swift went viral.

Individual police officers have taken to TikTok, a nascent social media video platforms similar to now-defunct Vine, to showcase a fuzzier, friendlier image. (This YouTube video features a compilation of "Cop TikTok" videos). Both anti–police racism activists and police or pro-police folks have an outsize presence on the platform. According to Digiday, 60 percent of Tiktok's U.S. users are between the ages of 16 and 24; Gen Z is "notably less trusting" of the police.

This brand of so-called copaganda is dangerous not merely because it ignores and dismisses a very important part of the story of policing in the country, but because it echoes uncritical narratives about what policing is and what police do. The institution of the police has its roots in slave patrols; modern policing was molded by the labor movement, for which cops served as uncritical foot-soldiers for rich factory owners seeking to strikebreak and destroy unions.

The White House has become a reliable chamber for the most noxious brand of copaganda, often spouted via Twitter or Facebook. Today, White House Press Secretary Kayleigh McEnany listed off the "great things" police have done in the last year, which she suggested outweigh the "injustices" — like George Floyd's death. Many of those "great things" included everyday acts of kindness and friendliness, like "in Virginia, officers could be seen playing with little girls." "This is who our great law enforcement officers are, and we should remember that," McEnany said.

It goes to show the two sides of social media: as much as it has been crucial to building public outrage over police racism, so, too, has it been co-opted by taxpayer-funded police departments seeking to rebuild their image.