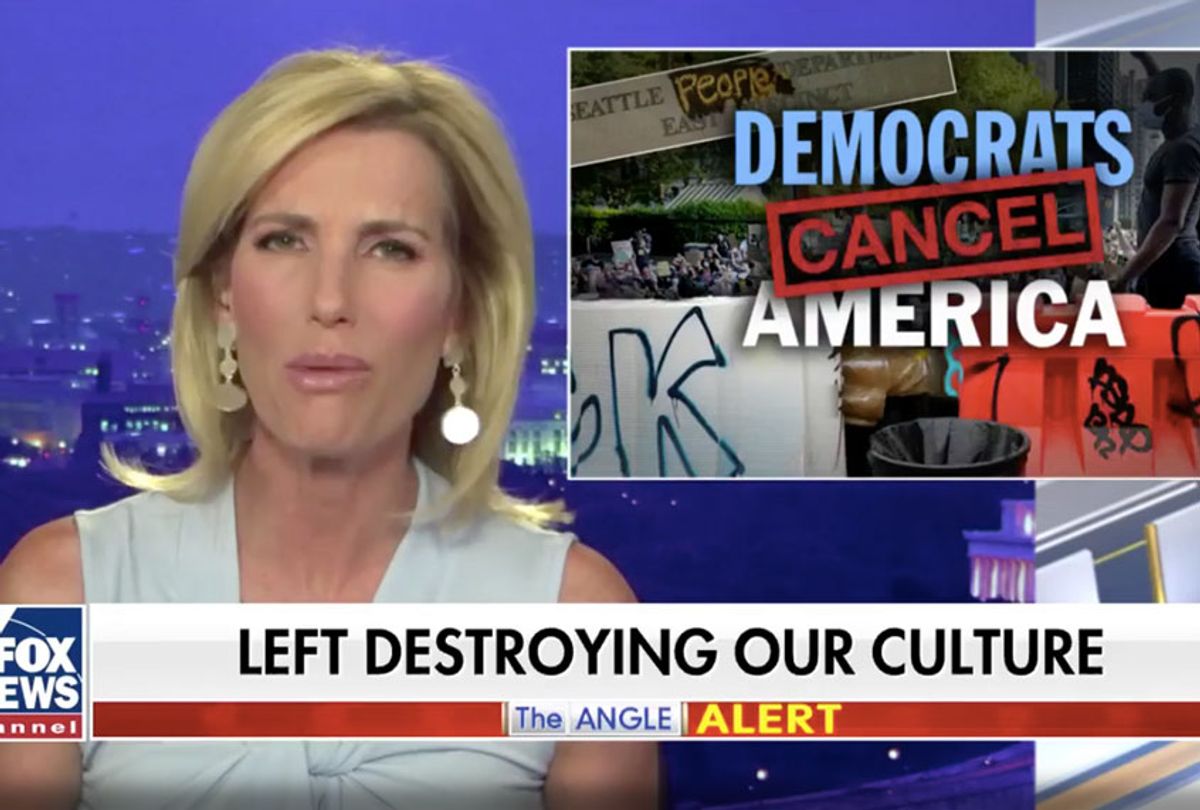 Fox News host Laura Ingraham — who has been called a "Neo-Nazi fan favorite" by Rep. Alexandria Ocasio-Cortez, D-N.Y.; a "white supremacist" by Rep. Joaquin Castro, D-Texas; and a "racist" and a "monster" by her own brother — kicked off her primetime show Wednesday by warning viewers that the social justice movement sweeping the nation in the wake of George Floyd's death was a "propaganda war" waged by liberals bent on dismantling U.S. history and culture.

While Ingraham's monologue, which mostly appeared to recycle conservative talking points, did not touch on the renewed movement in communities across the country to remove statues honoring heroes of the Confederacy, she lamented that this new "war" has had a deleterious effect on the "work product" of various industries.

America's liberals have "purged almost all conservatives from academia, the entertainment industry and journalism," the host said. "And one by one, those sectors ultimately fell victim to oppressive groupthink, which had a terrible effect on their work product and credibility."

"The punishment for deviating from the sentiment du jour grew harsher over time," she added.

As evidence that liberals were only hurting themselves, Ingraham pointed to Kevin Hart's withdrawal from hosting the Oscars and footage of students saying "f**k you" to right-wing provocateur and convicted felon Dinesh D'Souza in a Michigan State University lecture hall in 2018.

Ingraham was at one point engaged to D'Souza. In 2014, when he was sentenced for campaign finance fraud, she penned a letter to the judge overseeing the case.

"Dinesh is simply one of the finest human beings I have ever met. His generosity of spirit, philanthropy, keen sense of compassion and devotion to country are what I hope my own children exhibit when they mature into adults," she wrote after D'Souza had pleaded guilty to soliciting campaign donations from others and then reimbursing them, allowing him to skirt federal maximum contribution laws.

D'Souza was sentenced to eight months in a halfway house and ordered to pay a $30,000 fine. He was later pardoned by President Donald Trump.

Ingraham, on Wednesday, then landed on her thesis: "What we are witnessing is a relentless propaganda war against the old teachings about America. It's an effort to smear our history and our patriotic spirit."

She then sampled some history, dubbing the protesters now demonstrating against police violence "the new Bolsheviks" — the Russian Revolution-era communist group led by Vladimir Lenin — before invoking conservative intellectual giants of yore, such as Phyllis Schlafly, who "warned about the poisonous effects of the cultural monopolies."

Other select chestnuts included familiar complaints about Huckleberry Finn, which Ingraham claimed cannot be read anymore "without hearing that Mark Twain was just a hopeless racist." Various groups have banned Huckleberry Finn since 1885, the year it was published, often citing its rampant use of the N-word.

"Entire blocks in Seattle look like Mogadishu circa, what, 1991 or 1992," she said over video of a man setting up a handmade posterboard sign outside of the recently cordoned six-block Capitol Hill Autonomous Zone, a "cop-free zone" which peaceful protesters established after the city's police department abandoned their precinct in an effort to de-escalate tensions after demonstrators were tear-gassed.

Protesters have brought art and books to the zone, as well as held concerts and movie nights there.

Ingraham lamented that corporate concessions such as HBO temporarily pulling "Gone with The Wind" and LEGO's temporary cessation of "marketing little plastic police figures" will not win the day.

"Giving into threats only leads to more threats," Ingraham, whose incendiary race-baiting has repeatedly cost her advertisers, said.