What Tucker Carlson is doing with his newfound clout: Attacking Republicans

Carlson: Republicans are "empty, sad people" trying to fill a "yawning void inside where a personal life should be" 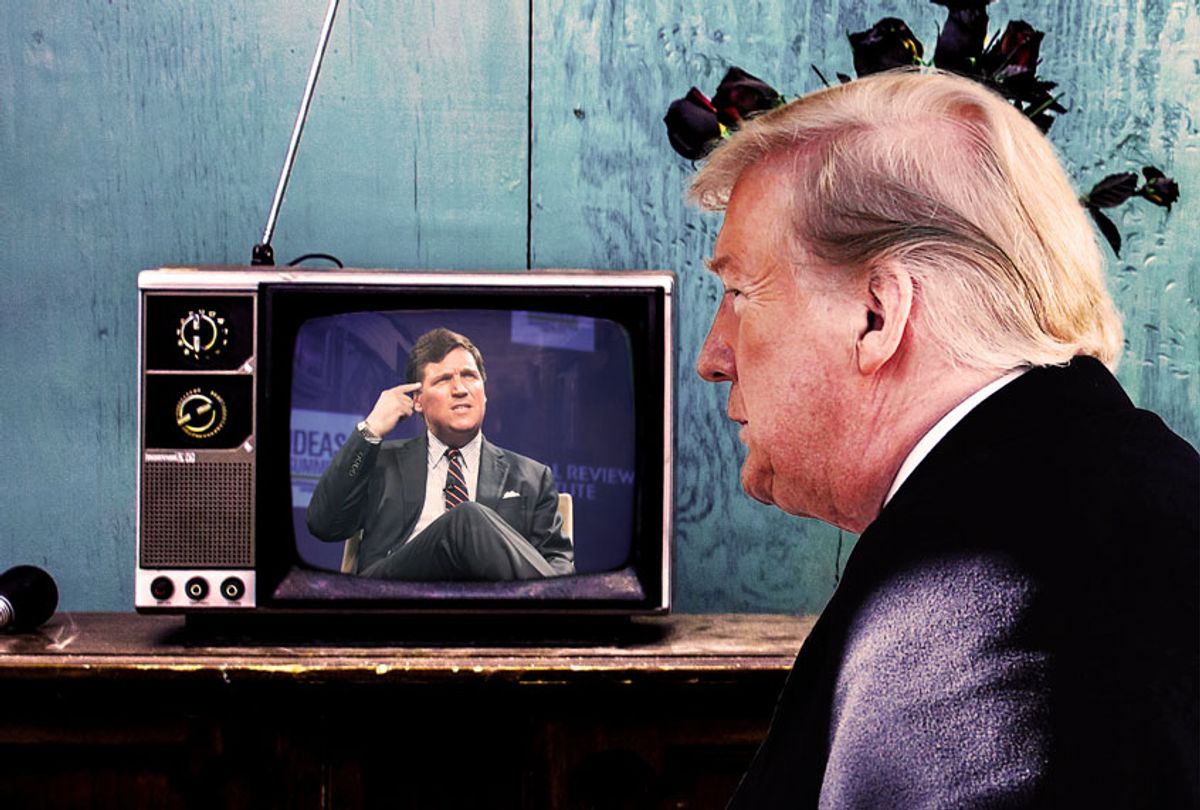 The night after news broke that Fox News personality Tucker McNear Swanson Carlson broke colleague Sean Hannity's record for the highest-rated quarter of any cable news program in history, Carlson used his platform to say that most elected Republicans are "empty, sad people" desperate to fill a "yawning void inside where a personal life should be."

Carlson, who once called white supremacy an "attack on white people," also took the occasion to apologize to his mostly white audience for feeding them "partisan junk food" peddled by current GOP leadership.

Though this might be perceived as heresy, it's not that simple. Carlson, never one to shy from criticizing Donald Trump or GOP orthodoxy, appears to be cashing in on his new clout as part of an effort to rebrand himself — as well as Trump and possibly his network — in anticipation of a Republican electoral defeat in November.

Over the last few weeks, he has laser-focused on lambasting the Black Lives Matter protests, styling himself the indefatigable torchbearer for the culture wars and putting himself in a position to say "I told you so," come an electoral bloodbath.

On Tuesday, the right-wing host framed his most overt friendly-fire attack yet with the previous night's interview of Sen. Mike Braun of Indiana, whom Carlson painted as the archetypally "weak" Republican who doesn't "believe in anything."

"As the mob burned cities and shot police officers, Braun used his power in the U.S. Senate to punish local police," Carlson said.

If elected officials don't change, Carlson warned, Republicans "at all levels" could lose in the fall. And if they do, he said, "there will be profound consequences for you" — meaning his overwhelmingly white audience.

"People who supported Donald Trump will be punished, there's absolutely no question about that," the host said. "There's never been an American political party as radical and as angry as the Democrats are now."

Carlson raised concerns last week that Trump was on pace for a loss in November and has turned up the heat since then, laying out his own vision of what the party should look like.

"Instead of improving the lives of their voters, the party feeds them a steady diet of mindless symbolic victories, partisan junk food designed to make them feel full even as they waste away," he said.

"Who cares how many Benghazi hearings we have? We're supposed to care — why should we? How did Peter Strzok's text messages become more important than saving American jobs from foreign nationals who are taking them? It is lunacy. We fall for it every time," the Fox News host said.

"And to the extent this show has participated in it, we apologize with deepest sincerity," he added.

GOP voters must now force elected officials to change paths, Carlson declared, reassuring his audience that Republican officeholders are "not, by and large, evil people."

"Despite the way they talk, they're not secretly working for the other side. Most of them are just empty, sad people, and politics is the way they fill the yawning void inside where a personal life should be," Carlson said.

"They're pleasers," he continued. "They're searching for the approval of strangers. Our job is to give them clear instructions about what we want. We do that by voting and by making noise."

Carlson currently commands the most-watched platform in cable news, pulling a nightly average of 4.331 million viewers, according to the most recent data from Nielsen Media Research.

President Trump, who famously keeps a close watch on ratings, viewing them as a type of political poll, has allegedly told associates that he "regrets" taking son-in-law and senior adviser Jared Kushner's advice — such as on criminal justice reform — and has instead resolved to hew to his instincts, Axios reports.

One source said that Trump would accept "no more of Jared's woke s***," which according to Axios the president believes has damaged him politically.

But outside of Trump, Kushner still wields the most power in the White House and the campaign.

Politico recently reported that when Kushner needed someone to blame for Trump's disastrous comeback rally in Tulsa last month, he chose to oust campaign COO Michael Glassner. The move spares, for the time being, campaign manager Brad Parscale, whose missteps have drawn Trump's ire before.

Axios also points out that the president takes Carlson's analysis seriously. In mid-June, Carlson reamed out Kushner for advocating judicial reform, which the host viewed as the wrong political path for Trump.

"In 2016, Donald Trump ran as a law-and-order candidate because he meant it," Carlson said at the time. "And his views remain fundamentally unchanged today. But the president's famously sharp instincts, the ones that won him the presidency almost four years ago, have been since subverted at every level by Jared Kushner."