White allies, stop asking me if I'm OK. Black people are not OK

Could I contract the coronavirus while protesting? Yes. But racism is a virus, too 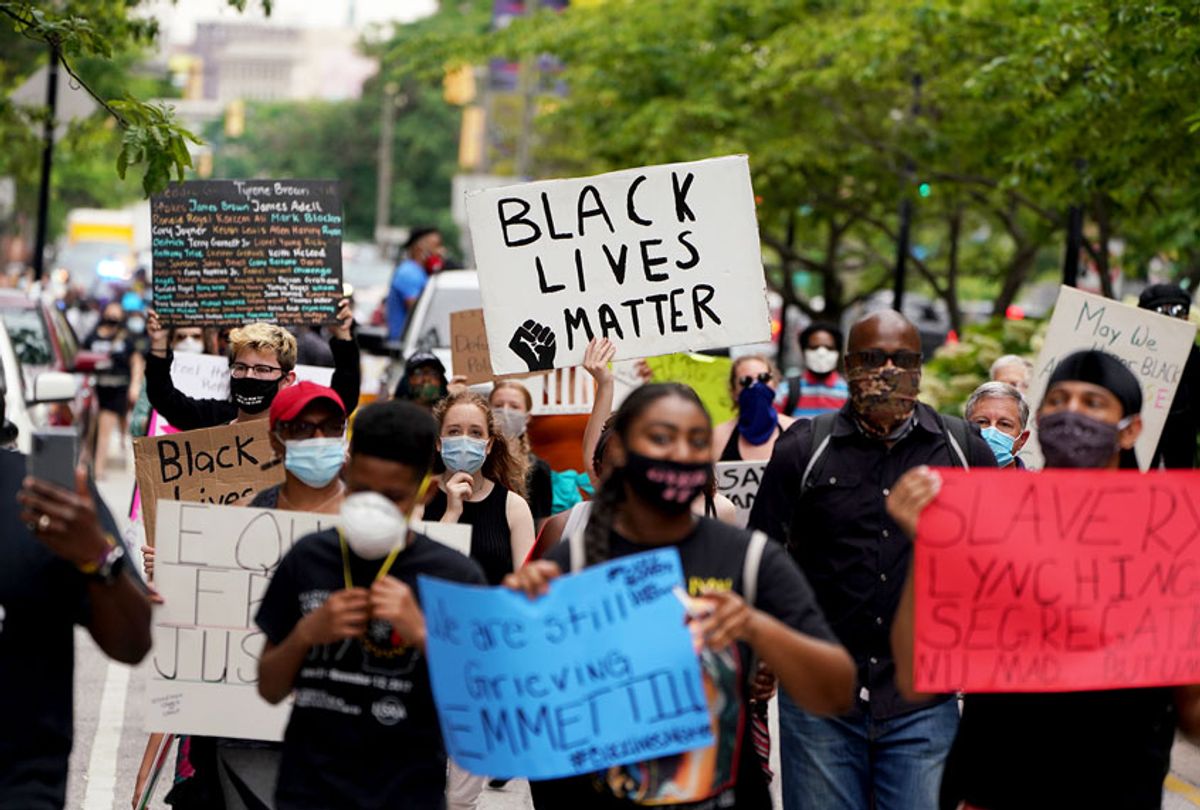 Demonstrators march as part of a Juneteenth Celebration on June 19, 2020 in Baltimore, Maryland. Juneteenth commemorates June 19, 1865, when a Union general read orders in Galveston, Texas stating all enslaved people in Texas were free according to federal law. (J. Countess/Getty Images)
--

I have had enough of this performative bullshit from "allies" issuing statements of support. And I have had enough of the white "allies" who know me sending me flurries of emails checking in and texts with heart emojis and "thinking of you" messages to see if I'm OK, and then asking me to tell them how to be anti-racist in the same breath: "Can you lead a discussion on racism or help me talk to the Black people I know? And what books should I be reading right now?" Do your own self-work, because as you see, Black people are busy with a more pressing issue — our survival.

The cops have been killing us for years — it's just now being filmed. And America has been doing it for centuries — slowly killing us by design, from the very first steps of our ancestors on this soil as captured people. Now our nation is battling a pandemic with COVID-19; the murders of George Floyd, Breonna Taylor, Ahmaud Arbery, Rayshard Brooks, and countless others are just a symptom of a virus we have been battling for 400 years. And what we are witnessing in this moment is centuries of oppression and anti-Blackness coming to light in a country that was never built for us, but was built by us.

As a Baltimore native, I was out in the streets in 2015 fighting for justice for Freddie Gray, a 25-year-old Black man who was arrested for nothing and died in police custody. And five years later, I'm protesting again — this time fighting my anxiety to risk my life twice, like so many other Black people who are disproportionately impacted by the COVID-19 pandemic. Could I contract the coronavirus? Sure. But racism is a virus, too — one that would not allow me to sit in the comfort of my home and watch as thousands took to the streets to demand justice. Could I have been shot or beaten or harmed by police? Absolutely. And if Breonna Taylor and so many other Black women's stories are any indication, I could also have been deemed invisible.

If we don't use this moment — with millions of people across the country and the world paying attention to Black lives — to get real about fixing the systemic issues in this country, then we've already lost.

My Aunt Katherine Judd, whom I lovingly call my Aunt Kat, contracted this awful virus and is in the hospital battling that and other health issues. A few years back, she fell ill with a rare spinal condition that would paralyze her from the waist down. My aunt grew up in Petersburg, Virginia. Both sides of my family are from there. She was always an independent woman and thinker who didn't wait for mountains to move; she moved them. After getting her medical training at Beth Israel Deaconess Medical Center in Boston (a top-ranking teaching hospital backed by Harvard), she decided to relocate to Baltimore and made a career as a phlebotomist. She was the person who would draw your blood and you didn't even feel it or know it happened. She has always loved having political conversations with me and my mom. Just a few days before she tested positive, we talked about presidential politics and the pandemic. Growing up, my aunt was so informed and savvy that we could talk about everything political and everything Black and everything politically Black. She always listened to talk radio, and then would call my mom to talk about the latest Baltimore community issues, and which politician they absolutely would not vote for that year. She later moved back to Virginia and lived with and took care of my ailing grandmother. Very quickly, she became part of my political and activist consciousness, along with my mom and dad.

So with a heavy consciousness, I got up, grabbed my mask and went out to protest in my hometown with my aunt on my mind, knowing she is battling the virus in the hospital back in Virginia, a state that like so many others has reopened too quickly. I went out knowing that she is a Black woman in a health care system that continuously fails and kills us. But most importantly, I went out knowing that if this protest movement had happened when she was my age, she would have done the same thing. If she could get up out of that hospital bed and protest today, she would without hesitation.

All of the systems have failed us as Black people and particularly as Black women. But we don't have a choice but to demand respect and justice, as we have often done. Police in a small West Virginia town recently acquired a military-grade MRAP (Mine-Resistant Ambush Protected) armored vehicle, when states across the country are about to cut education budgets due to the pandemic recession. And even before COVID-19, school districts across the country were already shortchanging Black, Latinx and Native students by about $1,800 per student in state and local funding.

Look, I didn't choose to give cops a tank rather than fund our public schools. I didn't segregate our schools. I didn't create the 1 percent. I didn't mismanage our health care system.I didn't invent the housing crisis. I didn't vote for the racist, incompetent, ignorant, cowardly, self-absorbed failure that we call president. I didn't break this country. White people did.

Black people are tired. But we are also tired at our intersections.

My aunt, who was once part of our nation's health care system striving to save lives, is now fighting for her own in a system that has failed her and countless other Black women time and time again. Breonna Taylor was an EMT and emergecy room technician who helped save lives during a global pandemic, and her reward was getting shot at least eight times by police while sleeping in her own home. Activist Oluwatoyin "Toyin" Salau talked publicly about her murderer assaulting her, and no one acted. All Black women are essential. As a Black feminist, I am tired of watching white women absorb the activism space when 53% of them voted for the 45th president. Black trans people are being murdered, too. Black pain is real. And Black pain at the intersections of our identity is real, too.

The public lynching of George Floyd at the hands of law enforcement is horrific and senseless. And the young Black girl who filmed his murder is also traumatized. His daughter may also be traumatized, too.

Our loud and peaceful protest is not just about policing. It is also about systemic and institutional  injustice. And honestly, it's about building a new table, because the solidarity seats that folks will give us now aren't good enough. It is about social justice in a country that at every turn works to oppress and kill us — from redlining practices in housing to health care systems to a criminal justice system that was meant to lock us down before we can even get up and succeed. It is about educational justice to ensure Black students are not looked at as where they come from but who they can be and the path forward they can lead.

All of the performative acts of solidarity and kindness are temporarily nice — until these same white, privileged people are asked to actually show up for us, to do more than just stand with us at a protest. It is past time for them to use their power and privilege to risk and sacrifice something personal and potentially even detrimental to push for meaningful change — the same way that Black people are risking our lives for the more just America we deserve. And we should keep calling them out on it, pushing them past their statements on Black lives to ask about the makeup of their boardrooms and who holds the power in their organizations and corporations.

I hope that this moment is a turning point toward shared responsibility on racial and intersectional justice. Change happens when people stop undervaluing our lives. But no matter what, we must value our lives more than anyone else.

We cannot afford to wait on white people to save us — even the well-intentioned — because of how whiteness as a social construct operates to oppress us in this country. This moment has hopefully shined a light on what's deeply, deeply wrong with America. It's on them to deal with their family and friends about how to dismantle their bias and fear of us. We're not at their kitchen tables. But we can build a stronger table and a stronger foundation for ourselves. Frankly, if they don't know when to shut the hell up, sit down, listen and let us lead ... then we have to lead anyway.

I am all for the monuments to slavery coming down, but when the protests eventually subside and the hashtag activism is muted, we must continue to take meaningful steps to make a difference. It is our job to make people in power constantly uncomfortable.

Just as we protest in the streets against police violence, we should protest in school board meetings. We should show up at the town halls and demand folks listen to our concerns. We should support community-based and civil rights organizations with Black leadership — not just the NAACP and the obvious ones who will survive this. We must hold Black people with privilege, fame and wealth accountable for doing more than just voicing support, lending their names and capitalizing on our pain. We should vote because our lives depend on it and our ancestors died for it, and then support promising Black candidates with a vision for a better future. We should support our historically Black colleges and universities that we know will be hit hard due to two pandemics. We should also not allow mainstream, white America to co-opt and define our holidays like Juneteenth (no mattress sales, please!) or to declare victory because they decided to close a bank for the day in recognition. We should keep the pace, marching in that Black Parade (thanks, Beyoncé) carefree and unapologetic because we know that progress is steady and hard, but justice is worth it. We have been oppressed for over 400 years and this moment is far too long overdue. But what we do with it matters, too.

I hope my aunt makes it through all this — not just the coronavirus, but racism and sexism, too. I hope all of our aunts make it.

But in the meantime, I'm not OK.