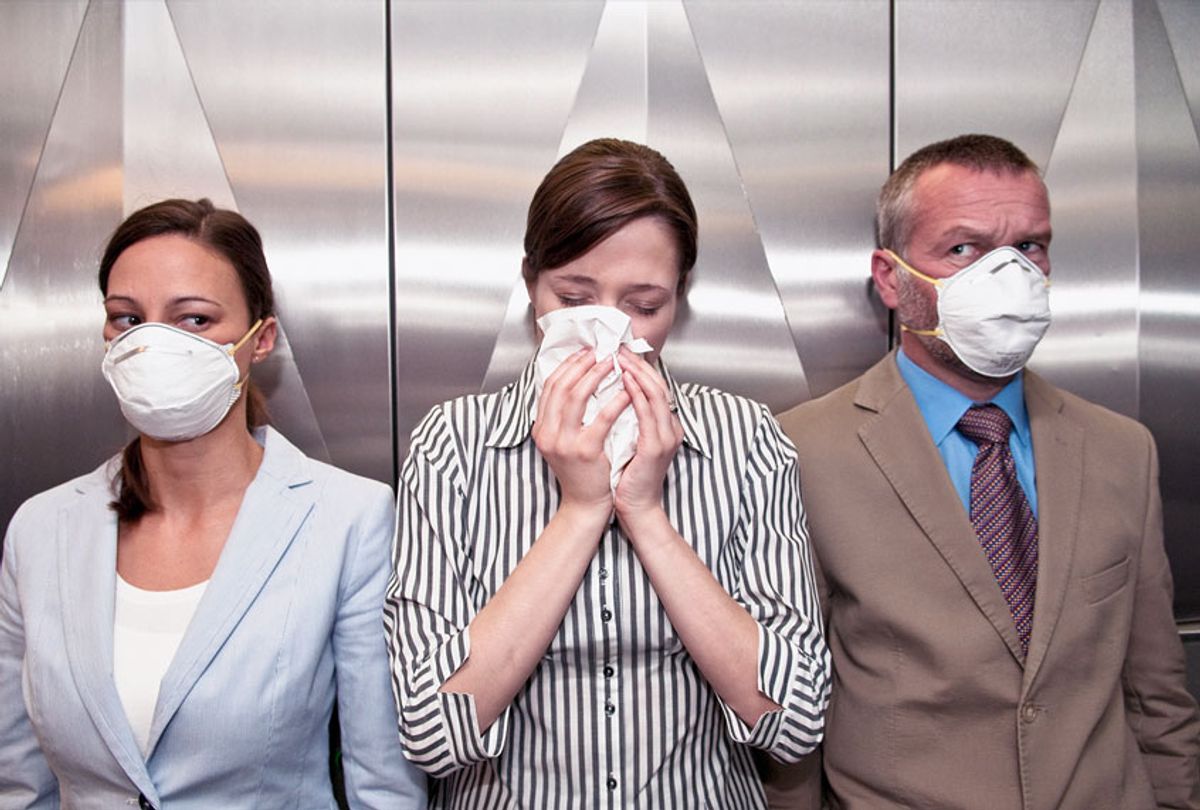 Woman coughing around others (Getty Images)
--

The World Health Organization (WHO) acknowledged on Tuesday that the coronavirus can spread through floating air particles, although it stopped short of changing its safety guidelines for addressing the ongoing pandemic. The re-evaluation came after hundreds of scientists worldwide spoke out about their observations of the ability of the virus to spread through the air.

During a press briefing, WHO Technical Lead for Infection Prevention and Control Dr. Benedetta Alleganzi explained that "we acknowledge that there is emerging evidence in this field, as in all other fields regarding the Covid-19 virus and pandemic and therefore we believe that we have to be open to this evidence and understand its implications regarding the modes of transmission and also regarding the precautions that need to be taken."

After noting that scientists still cannot accurately compare how frequently the virus is transmitted through aerosols, or floating air particles, versus being transmitted through larger droplets, Dr. Alleganzi pointed out that the agency also does not know the dose of the virus necessary for infection from aerosols.

"These are fields that are really growing and for which there is evidence emerging, but it is not definitive. However, the evidence needs to be gathered and interpreted, and we continue to support this," Alleganzi explained.

The WHO's statements followed a group of 239 scientists from 32 different countries who announced earlier this week that they were publishing an open letter stating that the coronavirus is far more predisposed to airborne transmission than previously believed. Aerosols, or droplets smaller than five microns, can float through the air and thereby provide virus particles with an opportunity to infect people long after an initial sneeze, cough or other form of excretion has occurred, they say.

Despite acknowledging that the 239 scientists are correct to be concerned about aerosols — a position that the WHO had previously not fully accepted — the international public health body stopped short of changing its public health guidelines. If taken seriously, the observation of the 239 scientists could necessitate measures such as wearing masks outdoors and in socially distant settings; having health care workers wear N95 masks while caring for patients infected with the coronavirus; updating ventilation systems with new filters and having them reduce air recirculation; and installing indoor ultraviolet lights that would kill the particles floating in the tiny droplets.

Speaking with Salon earlier this week about the 239 scientists' letter, signatory Dr. Linsey Marr said that "some of the measures that have already been implemented — including social distancing, mask wearing, and avoiding crowded indoor spaces — are effective at slowing airborne transmission of COVID-19. We should add attention to good ventilation of buildings with outdoor air. We just need to pay more attention to these efforts and to give them equal weight as handwashing."

Dr. Georges Benjamin, executive director of the American Public Health Association, told Salon that "it is well understood that aerosolization as a mode of transmission. The big unknown is how much infection does it cause, and what can other measures like managing airflow differently, UV light exposure, etc. reduce it over wearing a mask, handwashing and physical distancing."

This is not the first time recently that scientists have offered new perspectives on how aerosols can facilitate the transmission of the coronavirus. A paper recently published in the journal Physics of Fluids argued that the violent turbulence caused by flushing a toilet can send enough aerosols into the air to pose a serious coronavirus infection risk. The authors — Yun-yun Li, Ji-Xiang Wang and Xi Chen — make this argument based on the fact that "the main transmission routes of SARS-CoV-2 are droplets and direct contact," adding that "it is worth mentioning that, in March 2020, a research team from Sun Yat-Sen University found that fecal samples from some confirmed patients tested positive by nucleic acid detection, which provides evidence that SARS-CoV-2 has the possibility of fecal–oral transmission."

The authors advocated for a number of common sense measures to prevent toilet water transmission of the coronavirus including lowering the lid over the bowl before flushing, cleaning the toilet seat in public restrooms before using it and washing one's hands thoroughly after touching a door handle and flush button.

"This paper may also enlighten toilet manufacturers and prompt them to produce better designed toilets in which the lid is automatically put down before flushing and cleaned before and after flushing," the authors added.