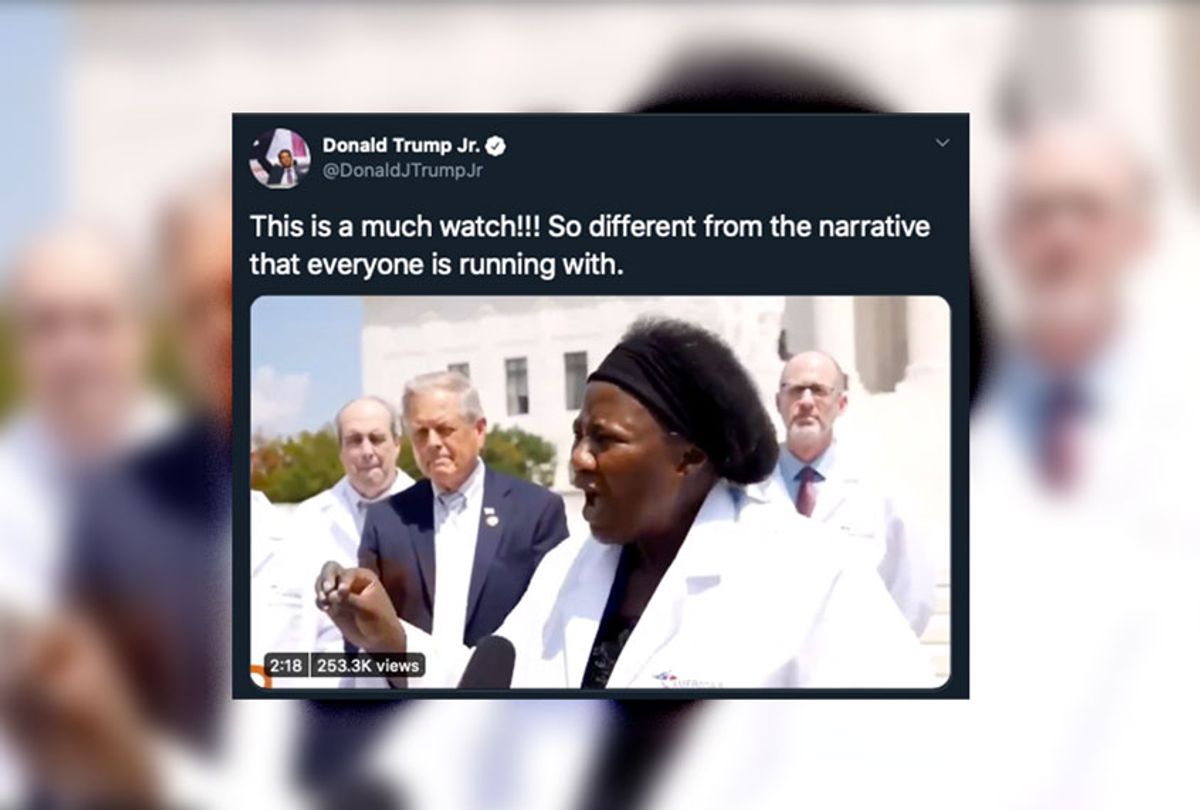 A video of Dr. Stella Immanuel was tweeted out by Donald Trump Jr. (Twitter/Salon)
--

On Monday, Twitter removed a video from President Trump's account in which a group doctors made blatantly false claims about the novel coronavirus and alleged that medical experts were involved in a conspiracy. It's unclear how many of the president's 84 million followers saw the video before it was taken down, but Donald Trump Jr. quickly shared a version of the video before Twitter responded by removing it and temporarily restricting his account. Facebook and YouTube have also taken down versions of the video.

The video, originally published by Breitbart News, showed a group of doctors claiming that masks are not necessary to contain the virus and that a combination of hydroxychloroquine, zinc and the antibiotic azithromycin can cure it. The video featured medical personnel from a group that calls itself "America's Frontline Doctors" and includes Dr. Simone Gold, an emergency medicine specialist who has appeared on Fox News to claim that stay-at-home orders are harmful, and Dr. Stella Immanuel, who has made inaccurate medical assertions such as arguing that impotence, miscarriages and gynecological problems are caused by sex with "tormenting spirits." She has also claimed that extraterrestrial DNA has been used in medical treatments and predicted that Jesus Christ would destroy Facebook's servers if her videos are not restored.

To learn more about the claims in the controversial video, Salon reached out to health experts. They found that the video's arguments about masks, hydroxychloroquine and the relationship between COVID-19 and heart problems are easily debunked.

Dr. Georges Benjamin, executive director of the American Public Health Association, told Salon by email that the video's assertion that there have been no coronavirus deaths "is not the experience of everyone else in the world who is treating COVID-19 patients, so one wonders what she was treating and if she treated anyone with COVID-19 who was seriously ill." He noted that the doctor in the video "misstates the concern about cardiovascular risk" with regard to hydroxychloroquine. "We know what that risk is and it is possible to get a population of patients with COVID-19 who are not at risk. But the risk is real and unquestioned."

Regarding the doctors' claims about masks, Benjamin observed that "masks are preventive not curative."

Dr. Russell Medford, chairman of the Center for Global Health Innovation in Atlanta, echoed Benjamin's observation, telling Salon by email that "the objective scientific evidence is extensive and clear: Masks can help prevent the spread of COVID-19 and that the more people wearing masks, the better."

He added, "As there is yet no cure for COVID-19, and in the absence, yet, of an effective vaccine for the SARS-CoV-2 virus, it is the responsibility of every American citizen today to protect themselves, their families and their communities by taking three simple but effective steps that are proven in multiple scientifically rigorous studies to inhibit the spread of the virus: practice social distancing, wash your hands frequently and wear a mask."

Medford described hydroxychloroquine as providing "no benefit" to patients with COVID-19 adding that "it might even be harmful. ... This is the clear conclusion of multiple, scientifically rigorous clinical trials."

Dr. Henry F. Raymond, associate professor and epidemiologist at the Rutgers School of Public Health, also told Salon that "hydroxychloroquine has not proven effective in the treatment of COVID-19 and may have negative side effects in terms of heart arrhythmia. As for masks... they have to cover your mouth and nose at all times when in environments where you may encounter the virus or if you might be shedding the virus that will spread to others."

Salon also reached out to legal experts about whether the de-platforming of the video constitutes an infringement of free speech. Trump and his supporters have accused social media platforms of violating free speech rights on previous occasions when they have flagged or removed content posted by Trump and his movement. For instance, Twitch temporarily suspendd Trump's account after he posted a clip from a speech that contained racist statements about Mexican migrants and Twitter fact-checking two of the president's false tweets about mail-in ballots. Trump later retaliated against Twitter by signing an executive order that could exempt social media platforms from certain legal protections, a move the president hailed on the grounds that "we're here today to defend free speech from one of the greatest dangers."

"Twitter is a private platform even though, as one federal circuit court rightly held, its use by a public official like the president can create public forum duties on the part of that official," Harvard Law professor Laurence Tribe told Salon by email. "Certainly Twitter's own decision to take down a medically misleading and thus dangerous video, by Breitbart or by President Trump or by Donald Trump Jr. or by anyone else, raises no First Amendment issue — any more than a decision by a television network to refuse to run a particular video as an ad would create a First Amendment issue."

He added, "In my view, what Twitter does in taking down what it deems a misleading or otherwise dangerous video or other posting does not interfere with the free speech rights either of the tweeter or of what might be called the tweetees — those who read and view Twitter posts."

Eugene Volokh, a professor at UCLA Law School, echoed Tribe's observation that this is not a First Amendment issue but argued that one could consider it a free speech issue "in a broader sense than just the legal":

An analogy: Say that Twitter said that they will take down any videos that it thinks are unpatriotic (or for that matter that criticize Twitter). Not a First Amendment violation; not illegal more generally; but I think we might say that it undermines free speech, by making it harder for people to debate important topics. Likewise for other kinds of takedowns.

Now one might also say that, despite the interference with free speech, the takedown was a good idea, on the grounds that the video was inaccurate or dangerous or some such. That's especially so if you're talking about free speech as a social practice, and not just as a legal right. But I do think that, when immensely influential platforms such as Twitter decide what people can communicate on those platforms and what they can't, that is a free speech issue.