Music helped treat her father's dementia, and that's why Shohreh Aghdashloo made "The Cuban" 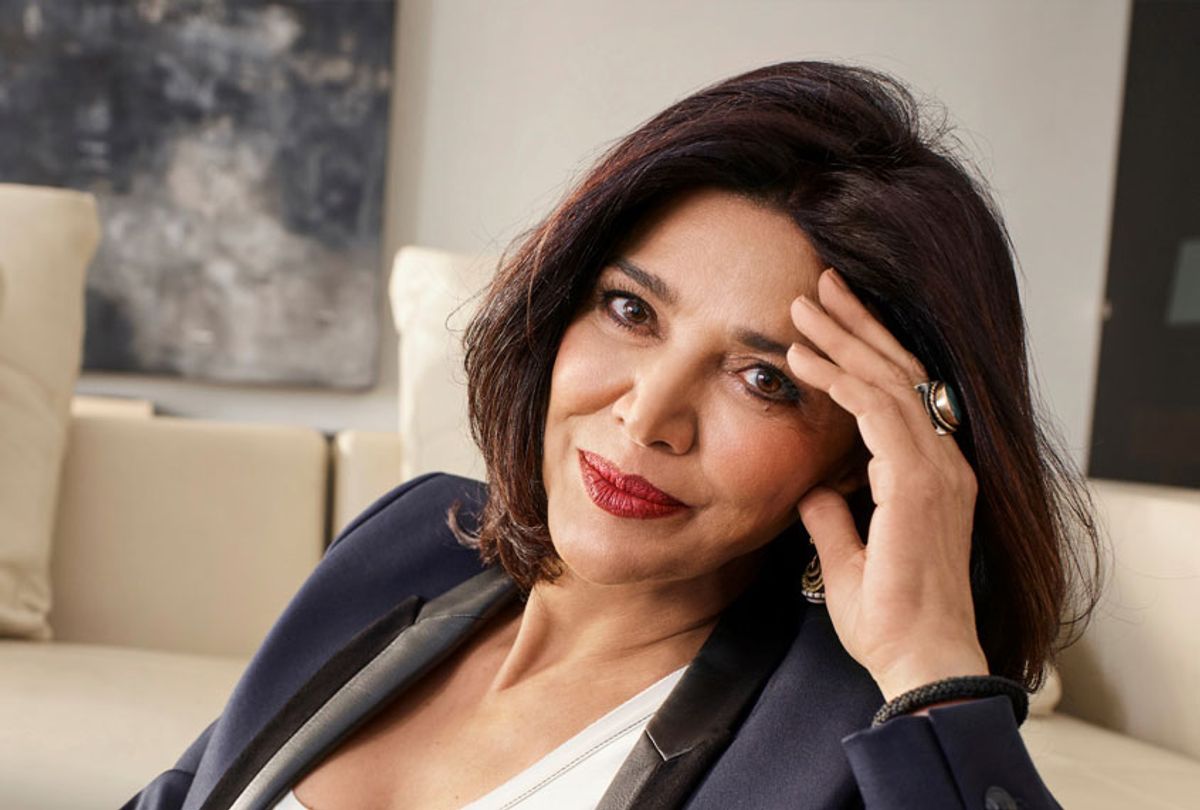 In the heartwarming Canadian drama, "The Cuban" Shohreh Aghdashloo ("The Expanse") plays Bano, the Afghani aunt of Mina (Ana Golja, of "The Fanatic"), a plucky pre-med student. Mina cares for the title character, Luis Garcia (Oscar-winner Louis Gossett Jr.), a jazz musician and forgotten legend now living in an assisted living facility. He is being treated for vascular dementia and Alzheimer's. Mina uses music (and food) to care for Luis, who responds to her treatment, much to the chagrin of the administrators.

Bano, a former doctor, is a now an administrator in the facility. She worries about her niece making bad decisions — not just in how Mina is ignoring protocol in caring for Luis, but also that she is neglecting her studies and spending time with a guy, Kris (Giacomo Gianniotti of "Gray's Anatomy").

As Mina is helping Garcia remember his better days as a performer, Bano is confronted with her past.

Aghdashloo, who executive produced "The Cuban," steals the film with her flinty performance. It is not just the Oscar-nominated actress' deep raspy voice that demands attention, it is her entire presence. She is alternately conspiratorial, whispering to Mina about their cousins, and commanding as when she confronts Mina about her behavior. And while Bano may be tough as nails, she does show moments of vulnerability.

The versatile actress who came to prominence in America with "House of Sand and Fog," and delivered a powerful turn in "The Stoning of Soraya M.," recently had a comic supporting role in "A Simple Wedding," (another film she executive produced). She spoke with Salon about her career and "The Cuban."

The last time we spoke, you told me you pick your roles carefully. "With a pair of tweezers," was your phrase. What appealed to you about "The Cuban," and prompted you to be an executive producer for this film?

Sergio [Navarretta, the director] asked me to meet, and he is telling me the story, and my heart is melting because I had the same experience with my own father. Ten years ago, my father shows signs of Alzheimer's, and my mother told us that he may not recognize you. She told me to politely say, "I'm your daughter." At a family reunion he was totally out of it. He said it was like meeting for the first time. My brother, who is a doctor, put on Persian music, and my father came to life. He knew everyone, and the name of the song. It was one of those golden moments: we had dad back; he recognized us. My brother kept playing Persian music.

But I didn't put this together. I wasn't able to think that the music had an amazing effect on people with Alzheimer's. It worked with my father. I thought it was just a personal experience. When Sergio told me the subject matter, I was in tears. I said not only do I want to do the film, but I also want to executive produce it because it's a jewel. It will help millions of patients with Alzheimer's and dementia. It works and is a new way to take care of people. We're not taking mental health seriously. Playing music for patients— even those being taken care at home — it is better than leaving the patient alone dealing with his or her misery. Play music they are familiar with to take them back to good old days and give them food they are familiar with. Don't change their habits, but help them find themselves, and make them feel like they are still living in this world.

You create a deep background for your characters. Bano gave up her career, and other things to come to Canada. She is fiercely independent. What details did you give her character to create her backstory?

When I first read the screenplay, I noticed that she and I share a lot; we both left our country and came to the Western world to make a better life. But we also educated ourselves, and it was our perseverance that brought us here. We are [working] to get to a better place. I felt for her deeply because I had two friends from Iran who were like Bano and were, culturally speaking, incapable of living as their authentic selves in the new land.

I like the idea in the film that Bano has one foot in the old land, one foot in the new land. She can't let go of her heritage, but Mina, the younger generation does not feel the same way. Can you talk about the immigrant experience, and starting over in a new country, which you have some experience with yourself?

When you migrate, the first thing you try to do is disconnect with the past. They say if you think about the past you are depressed. If you think about the future, you are anxious. Think about now, this moment, and you are a normal person. Bano feels the same way. When you change countries, it means you want to change your life, so you don't want to come across points of references that will take you back and remind you of the serene, beautiful life or rough time you had in your [old] country. The best and worst will connect you to the past and none of it can help your life today. Those people try to cut the past right away and not worry about the future. Get yourself acclimated and get educated. This is why Bano does not want to connect with the past or remember it. It would be easy for her to cherish her memories, but she needs to forget about the past to educate herself and not act like a silly young girl but think about starting fresh.

I appreciate how the past haunts Bano. She tells Mina, "You can't change the past. All you have left is the future." What are your thoughts on past and future?

We have no idea what the future has in store for us. Why entertain bad ideas? Entertain the right, good idea, and not get caught in something that happened and that you can't do anything about. This is what I tell my daughter about the future. When, in my belly, did you know what you were coming into? It's that obscure. Why get agitated or depressed over something that hasn't happened?

Music is key in the film and is used to generate memories. Bano appreciates Mina's singing.  Afghanis are listening to Cuban jazz. Can you talk about the music you listen and dance to?

I dance to African music and Arabic music — it's the richest. They are similar to classic Persian music. In the film, the Cuban music is coming from Afghanistan, which has been invaded by Russia. I had a conversation with an Afghan who said they brought music from all the communist countries, including Cuba.

Bano is a bit strict in the film. She insists on education as opportunity and wants Mina to stay away from Kris and focus on her studies. What observations do you have about her character's attitudes?

To my beliefs, it's not about the boy. If their relationship was happening at the right time, Bano wouldn't say anything to Mina. It's about education. People who come from another world, most of them see that the more they are educated, the better the life they and their families can have. It's what I told my daughter — higher education. We joke about it. Iranians are all about, "Bring me a Ph.D." So are Afghanis and Pakistanis. We want to learn more and educate more so we are more equipped to cope in the modern world.

All my father used to say was, "Education, education, education." My mother would look at us four kids and say, "Doctors, Engineer, Doctor, Engineer." I was supposed to be a doctor, and that was my family's mentality. That's how it is in Iran and neighboring countries. We need to learn and have access to educate ourselves and not spend our time elsewhere except in libraries, learning skills. I have failed ever since I lived outside Iran. When I lived in the U.K., I was like a lucky child adopted by the right parents. I had to work more, and harder, and be more alert, not only to appreciate what I have been given, but to communicate and take a step for myself and my country and the people of the world.

"The Cuban" offers you another dramatic role, but you had a chance recently to do comedy in another film you executive produced, "A Simple Wedding." Can you talk about playing two different overbearing motherly characters, Bano here, and Ziba in "A Simple Wedding"?

You see the difference between them! One is all about education, and the other is all about getting her daughter married. In order to do a comedy, I had to produce it myself, but I met Rita Wilson and Tom Hanks years ago. She had done "My Big Fat Greek Wedding" and wanted something about Iranian Americans. I got an email from her with a script. I read It and loved it and said, "I'll produce it to tell the story because it's funny to the Iranians." Who else will build the Persepolis in their backyard for a wedding? I'm dying to do another comedy.

As an Iranian actress, you are often cast in Middle Eastern roles. Can you talk about the opportunities and limitations you've faced in Hollywood as well as representation? I appreciate the cultural sensibilities in "The Cuban," but not all films are that nuanced.

The last 18 years, since "House of Sand and Fog," I've been working back to back. On my IMDb page you can see the work I've done. I've barely had vacation! I never had any problems working with American directors or producers or colleagues. I would love to say to either the Hollywood industry or the American film industry: if you do your work, and are hardworking and dedicated, and if you can do a good job, no matter what, regardless of your color of your skin, your background, or your accent, they will hire you no matter what. It's about good work, productive work, and dedication to your work. If you know how to do your job, there is no way you won't be successful. This is how this industry is. You need to be authentic, hardworking, and understand a situation and act accordingly. That's all you need to do. Trust me.

"The Cuban" is available virtually and in select theaters beginning July 31.