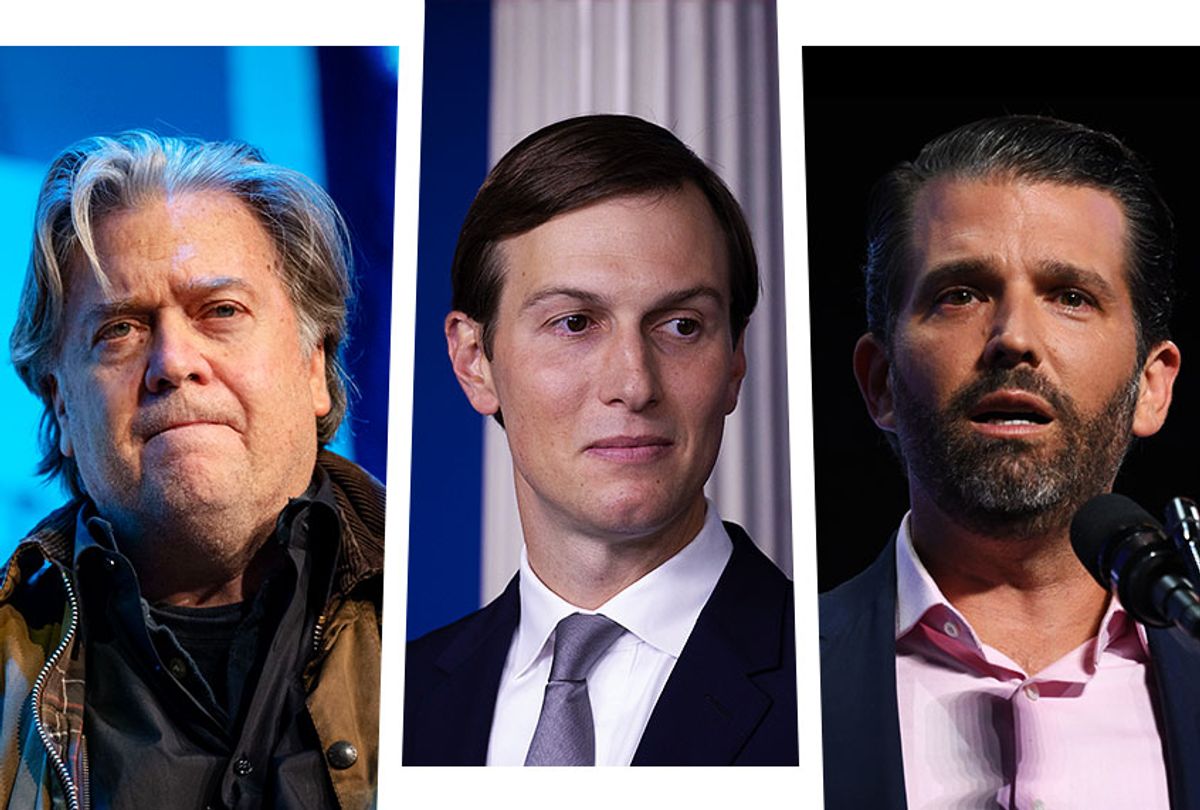 Leaders of the Republican-led Senate Intelligence Committee last year made criminal referrals of Donald Trump Jr., presidential son-in-law Jared Kushner and several other associates of President Donald Trump over suspicions that they might have lied to the panel, according to multiple reports.

Burr and Warner also told prosecutors that they believed former chief White House strategist Steve Bannon, former campaign co-chair Sam Clovis and Trump associate Erik Prince — the founder of Blackwater and brother of Secretary of Education Betsy DeVos — lied to congressional investigators, which if proven to be true, would be a felony. (Mueller's report previously concluded that Prince had lied to prosecutors about his dealings with Russians during the 2016 campaign.)

The news arrived the same week as the committee released its final report on its three-year bipartisan investigation into the 2016 Trump campaign's ties to Russia. The report, which went further than Mueller's, concluded that former Trump campaign chairman Paul Manafort worked with a "Russian intelligence officer," who may be linked to the hacking of Hillary Clinton's rival campaign. The report also detailed longtime Trump adviser Roger Stone's contacts with WikiLeaks, as well as efforts by the president and his aides to impede the investigation.

Though Don Jr. and others might have obstructed the investigation, the report said the panel did not pursue possible remedies because of "time and resource considerations."

Some of the committee's criminal referrals were sent to Mueller, according to the reports, while others were sent to the U.S. Attorney's office in Washington. Burr said in 2018 that the committee had referred cases to Mueller. It is unclear whether the Department of Justice took any action in response to the referrals.

"We have made referrals from our committee to the special counsel for prosecution," he said at the time. "In a lot of those cases, those might be tied to lying to us."

The committee raised concerns about conflicting accounts of a meeting Don Jr. and Kushner participated in with a Kremlin-linked Russian lawyer at Trump Tower during the campaign. Don Jr. initially claimed the meeting dealt with adoptions, but emails revealed that he had agreed to the meeting after he was told that the lawyer possessed "official documents and information," which would "incriminate" Clinton and be "very useful" to his father.

Gates testified that Don Jr. announced at a campaign meeting that he had a lead on "negative information about the Clinton Foundation." Kushner denied having prior knowledge of the meeting's topic.

"We are fully confident in the testimony and information provided by Donald J. Trump, Jr.," Alan Futerfas, a lawyer for the president's son, told The LA Times.

The referrals of Bannon, Clovis and Prince were sent to Mueller three months after his report was released.

"As you are aware, the committee is conducting an investigation into Russian interference in the 2016 election," the corresponding letter said, according to The LA Times. "As part of that inquiry, and as a result of witness interviews and document production, we now have reason to believe that the following individuals may have committed a criminal act."

According to the letter, the committee believed that Prince had lied about his dealings with a Russian oligarch and hedge fund manager Rick Gerson. Investigators suspected that Prince might have been trying to arrange a secret backchannel between the incoming Trump administration and Russia, and he and Bannon gave conflicted accounts of the talks, according to the report.

The committee also asked the Justice Department to investigate whether Clovis had lied about his discussions with Republican donor Peter Smith, who led a secret effort to find Clinton's missing emails.

Representatives for all three men denied they were aware of the referrals.

After the committee released its report on Tuesday, Rubio issued a statement insisting that "the committee found absolutely no evidence that then-candidate Trump or his campaign colluded with the Russian government" but did find "irrefutable evidence of Russian meddling."

Democrats on the committee said the report explicitly showed collusion between Trump's campaign chief and a longtime associate, whom the panel identified as a Russian spy.

"The committee obtained some information suggesting that the Russian intelligence officer, with whom Manafort had a longstanding relationship, may have been connected to the G.R.U.'s hack-and-leak operation targeting the 2016 U.S. election," the Democrats on the committee wrote in the report. "This is what collusion looks like."