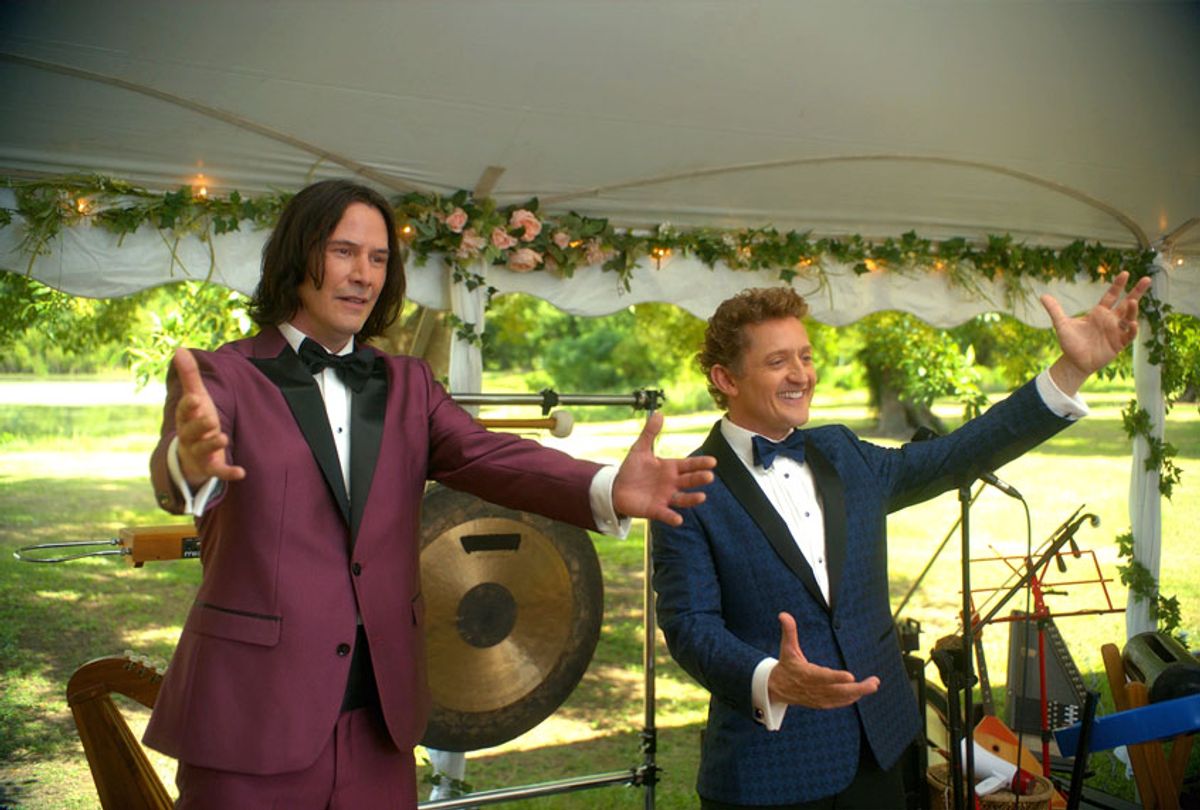 Making good on the promise of one of their signature catchphrases, "Catch ya' later!" Bill (Alex Winter) and Ted (Keanu Reeves) are back. Sure, it's been nearly 30 years since "Bill & Ted's Bogus Journey," the 1991 sequel to "Bill & Ted's Excellent Adventure" (1988), but "Bill & Ted Face the Music" reunites the two "Great Ones." And while much has changed over the years — phone booths are a thing of the past, and the internet is now a thing of the present — the Wyld Stallyns are still a band. And perhaps still ridiculously insipid. In fact, one in-film critic writes, "More Manure from the Stallyns" in response to one of their musical efforts.

This latest escapade for the duo has them determined to write the song that will be "the nexus point to bring humanity into rhythm and harmony." And they do travel through the Circuits of Time in their trusty (or rusty?) old phone booth to accomplish this task. The dudes meet future versions of themselves, some of whom are, well, dicks. Meanwhile, their adult daughters (Samara Weaving and Brigette Lundy-Paine) are going back in time — in a new-fangled egg-shaped transporter — to find the greatest musicians in history to play Bill and Ted's yet-to-be written masterpiece.

Suffice it to say, chaos and comedy ensue; the characters all end up in Hell in one sequence that reunites them with Death (William Sadler).

The actors chatted in a recent press conference held via Zoom about their thoughts on their iconic characters and Bill and Ted's latest adventure.

Why is Bill and Ted's advice, "Be Excellent to Each Other" is still relevant right now?

Keanu Reeves: I think it's relevant all the time. Now it has more impact because of the situation we find ourselves in and the idea of "Be Excellent to Each Other" is a very good idea.

Alex Winter: Keanu summed it up pretty well. The "Bill and Ted" movies have an inherent sweetness and a theme of inclusivity of people being kind to each other and coming together. This was the story the screenwriters set out to write many years before COVID, and so it may bring folks some joy.

How easy was it to get back into the speech and mannerisms?

Winter: We had time; it went through a lot of iterations with the script, and we worked on it together. During that time, I had a chance to wrap my head around who this guy was at this age, and Keanu and I spent a lot of time talking about those things. I wasn't like I had to suddenly turn it on like a switch. I had time to prepare. There is a familiarity to working with Keanu, and the physicality of that and the instinctive way we riff on the dialogue and that stuff kicked in on its own. It was helped by the fact that we had time to rehearse, prep, and discuss it.

Reeves: It's been many years since we've seen them last, and during those years they've lived life, and got more mature, and had daughters, and the relationships with wives, and their friendship and being together with this pressure of and this destiny they were given and this responsibility of uniting the world through music that they haven't been able to do. How do those pressures and what does that maturity look like? To play these guys who are familiar, but they are not caricatures of themselves from the past. We feel the weight of these guys and their joy and their spirit.

Did you have any after-effects of playing Bill and Ted?

Winter: Post-"Bill & Ted" disorder? The whole experience had a kind of warmth to it. They are joyful, optimistic people even if they are experiencing hardships and challenges and who have fears and doubts—all the human traits we do have. . . . . So many of us reunited. Keanu and I already see a fair amount of each other. There were difficult days, but you come away from the experience with great appreciation.

Bill and Ted were iconic at the time. Did you do anything to modernize them?

Reeves: The writers did that in the way they structured the film and the plot of the film. It was all about facing the music and being in the moment. That work was done for us. You see that in one of the opening sequences with Bill and Ted at the wedding ceremony. They aren't playing Van Halen riffs. They have expanded their musical [laughs] excellence. They have moved on and developed from that. The theme of the daughters using music as a mashup construction is a modern idea that brought it to present day.

How has fatherhood changed Bill and Ted?

Winter: That's another aspect of the modernity. They have very distinct lives with their wives, and they are parents and they love their kids and they love their wives, yet they are having challenges in their life. In typical Bill and Ted fashion, they are simple guys always facing these gigantic challenges — in this case, they have not succeeded in writing the song that will save the world and reality as we know it — that's what's impacting us.  How do we relate to wives and daughters? We are in marriage counseling. Their daughters love us, but they know we are having a hard time. We leaned into the grounded stuff that is launched to a completely insane narrative.

It was fun to play Bill and Ted as dads. It changes how you approach the role. These films aren't bro-y. They are more childlike. But once you're a parent, it's really not that. Bill and Ted love being parents and husbands. That created more things to play. The writers were intent in finding new ways into Bill and Ted and they gave us a lot of meat on the bone. We get to play so many different versions of ourselves. We look at different facets of these characters. This is really just Bill and Ted in painful and traumatic periods of different iterations in their lives. There were new things the guys came up with that gave us room to play.

What version of the characters was the most fun to play?

Reeves: I can't choose that. I don't think there's a "most" here. We had extraordinary makeup for the prison yard Bill and Tell, but I think it was more emotionally that the characters got dark, and it was nice to play the darkness against lightness. They are exuberantly darker. [Laughs]

What memories do you have about George Carlin?

Reeves: He brought class. He was such a down-to-earth guy, and he worked hard on Rufus. He brought a weight to it. Of course, its George Carlin coming from the future. It was extraordinary to have a chance to work with such an incredible person and artist.

Winter: I have an overall fuzzy – and I mean warm and fuzzy, not indistinct – memory and gratitude about having been able to work with George so closely. Keanu and I were young, and we had both been around famous people when we did the first movie, but George was a different kind of famous than the type of people we were used to meeting as an actor. It was the beginning of the "rock star" comedy identity — [Richard] Pryor, Carlin, obviously Lenny Bruce — so they were godlike. So much more than a personality. I was very starstruck by him. He was open and accommodating. You didn't feel a wall. I have an overall feeling of gratitude that we got that experience and that he was in the movie. He elevated "Bill & Ted 1" just by his presence.

Can you talk about the cross-generational appeal of "Bill & Ted?"

Reeves: I don't think that has hit yet. That's more of a concept than a reality. We've experienced something akin to that in the sense of people who meet us, and they tell us how they have shown the film to their kids and then we've met those kids.

Winter: We tried to make a film to be enjoyable whether you have seen the first two or not.

How has your journey been to be alongside Bill and Ted? What have they given you over the years?

Reeves: So many warm moments with fans. It is such an honor to work with Alex and the way that we can share our sense of humor and laugh at work I don't get that anywhere else. It's pretty extraordinary. I'm very grateful for it. Thanks, Alex.

Winter: It's obviously mutual. It's a strange and very lovely thing to have in your life. Its sweet from the outside experience. You're in your day and in your head and some five-year-old comes up and tells you how much you mean to them. Then there's the internal performance part of it of having these experiences. But getting into that groove — it's a lot like being in a band, especially since comedy comes from timing. We literally play together and having that opportunity of playing again with Keanu it was really fun and instinctive. It's rare.

What observations do you have about being back on the set in costume the first day of shooting?

Reeves: Our first day was in the phone booth, and I think that's where it landed for us. "Here we go." It was cool we got to do the first scene in the booth; that was like a touchstone.

Winter: We had no say in that or much of anything else, which is a good thing. But looking back, it was a smart move. It was helpful to start that way. It was a few days into production, after we shot the marriage counseling scene, there was a moment he and I were in a real groove. Suddenly, something was there I didn't expect that I hadn't quite remembered; and it was back and that was nice.

What do you think about having to wait another 30 years for the next "Bill & Ted"?

Winter: That's not good. Thirty years from now, it might be tough, but anything's possible.

What advice would Bill and Ted give to everyone who needs positivity in 2020?

Reeves: Alex, do the line and I'll do the other line.

Winter: Be excellent to each other!

Reeves: And party on, dudes!

"Bill & Ted Face the Music" is available in theaters and to purchase online Friday, Aug. 28.