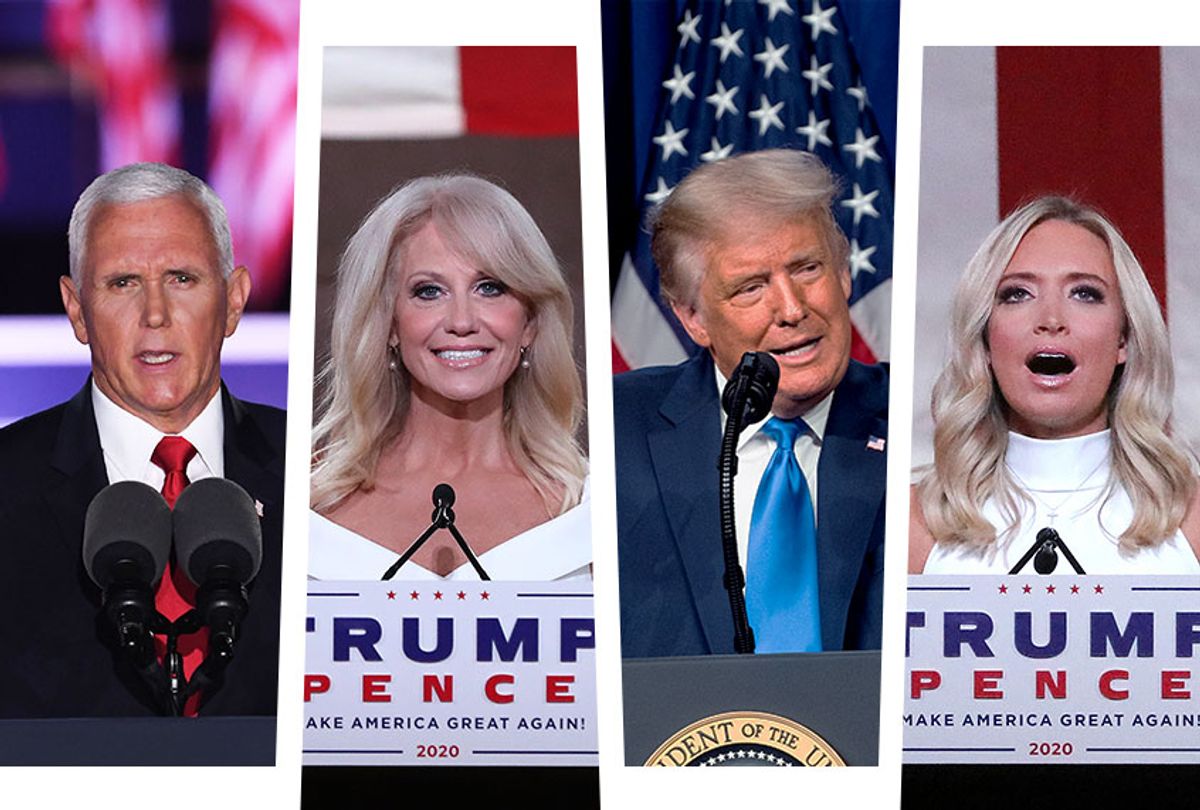 An otherwise lackluster third night of the Republican National Convention kept fact-checkers busy with a torrent of false claims aimed at rewriting the history of not only Trump's presidency but also the entire nation.

The evening, which featured mostly pre-taped speeches that largely ignored the hurricane bearing down on the Gulf Coast, was headlined by Vice President Mike Pence, the head of the White House coronavirus task force. His speech cast President Donald Trump's response to the pandemic as a success even as the number of COVID-19 deaths in the U.S. reached 180,000 — the most recorded by any country in the world.

"President Trump marshalled the full resources of our federal government from the outset. He directed us to forge a seamless partnership with governors across America in both political parties," Pence claimed.

However, Trump left the response largely up to individual governors, who were forced to bid against each other for vital medical supplies and forge their own path on social distancing restrictions. In mid-July, the nation reported its first weekly increase in COVID-19 deaths since April, largely in Republican-led states.

Pence praised the administration for delivering billions of pieces of personal protective equipment, even though such supplies remain short. Ignoring the fact that tens of millions have faced unemployment benefit cuts in recent weeks after Senate Majority Leader Mitch McConnell, R-Ky., adjourned the upper chamber for the rest of the month without a deal on a new coronavirus relief package, the vice president claimed that the administration had "enacted an economic rescue package that saved 50 million American jobs."

Trump, who has spent much of the pandemic attempting to downplay its impact and spreading conspiracy theories about it, then joined Pence at Fort McHenry in Baltimore to shake hands and take selfies with audience members, who did not wear masks and were not tested for the virus.

Instead of addressing the national reckoning on police brutality, Pence railed against protesters of Jacob Blake's death, who staged a peaceful demonstration on Wednesday, as he pushed Trump's "law and order message."

"You won't be safe in Joe Biden's America," Pence warned as he falsely claimed that the Democratic nominee would move to defund the police.

At one point, Pence erroneously linked protests in Oakland to the killing of a federal law enforcement officer, neglecting to mention that the officer was allegedly killed by a far-right extremist who prosecutors say wanted to use the protests as cover.

Other speakers also attempted to rewrite history — quite literally.

Lara Trump, the president's daughter-in-law, appeared to quote a Facebook meme when she declared that Abraham Lincoln "once famously said, 'America will never be destroyed from the outside. If we falter and lose our freedoms, it will be because we destroyed ourselves.'"

But Lincoln never said that, as fact-checkers at Politifact and Snopes pointed out when the meme went viral in conservative circles last year.

Another speaker, the 25-year-old North Carolina congressional candidate Madison Cawthorn, delivered an emotional speech which ended with him rising from his wheelchair with the aid of a walker. Cawthorn, who would become the youngest member of Congress if he wins the seat vacated by White House chief of staff Mark Meadows, compared himself to the Founding Fathers because of his age.

"James Madison was just 25 years old when he signed the Declaration of Independence," Cawthorn claimed.

But while Madison signed the Constitution, he never signed the Declaration of Independence.

Other false claims at the convention were more geared toward painting Trump as a very different president than the one he has proven himself to be.

White House adviser Kellyanne Conway, who recently announced she would be stepping down, described Trump as a "champion" of women.

"For decades, he has elevated women to senior positions in business and in government," she added. "He confides in and consults us, respects our opinions and insists that we are on equal footing with the men. President Trump helped me shatter a barrier in the world of politics by empowering me to manage his campaign to its successful conclusion."

Trump has appointed far less women to senior-level jobs than former Presidents Barack Obama and Bill Clinton and has repeatedly been criticized for sexist attacks against women who challenge him. Conway's comments came a night after another woman convention speaker appeared who believes women should defer their voting rights to their husbands.

White House press secretary Kayleigh McEnany delivered an emotional speech about her experience as an "American with a pre-existing condition," describing her decision to have a preventative double mastectomy. She said she was "blown away" when Trump called to check on her after her reconstructive surgery.

"Here was the leader of the free world caring about me," McEnany said, ignoring the fact that Trump has spent years pushing to destroy the Obamacare law, which would eliminate protections for people with pre-existing conditions like her own.

Jack Brewer, a member of Black Voices for Trump who was charged with insider trading earlier this month, repeated a common conservative myth about Trump's Charlottesville response.

"Are you going to allow the media to lie to you by falsely claiming that he said there were 'very fine white supremacists' in Charlottesville? He didn't say that. It's a lie," he falsely claimed.

Though this myth has been perpetuated across large swaths of the Republican Party, Trump absolutely described white supremacists as "very fine people." His remarks were caught on camera.

"They didn't put themselves down as neo-Nazis, and you had some very bad people in that group. But you also had people that were very fine people on both sides," Trump said during his infamous press conference after the murder of Heather Heyer.

The torrent of falsehoods overwhelmed fact-checkers for the third night in a row.

"It's not just big things, on broad revisionism on the pandemic. It's inaccuracy, carelessness," CNN fact-checker Daniel Dale said Wednesday. "There is just so much dishonesty and inaccuracy at this convention. It's hard for me to know where to start."