"Alabama Snake" can't out-weird "Tiger King," even if a preacher tried to murder his wife via snake 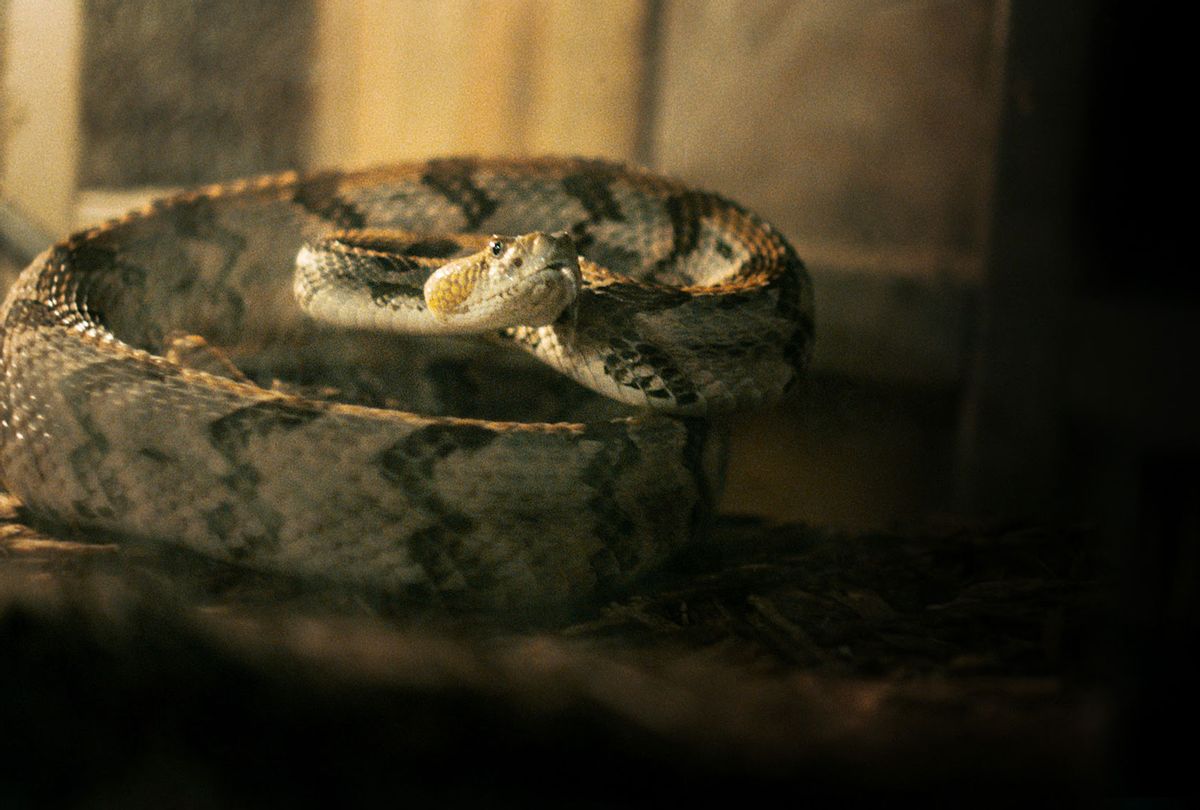 In the 2000 episode of "X-Files," Mulder (David Duchovny) and Scully (Gillian Anderson) investigate the Church of God with Signs and Wonders in the fictional town of Blessing, Tennessee, where a number of ritual murders involving snakes have taken place. In 2013, "Justified" featured a multi-episode arc where Boyd Crowder (Walton Goggins) butts heads with Preacher Billy (Joseph Mazzello) a snake-handling pastor, who ultimately dies on his own altar after sustaining a bite from a wild rattlesnake. This happens just after it's revealed that Billy's sister had been milking the church's ritualistic snakes of their venom the entire time.

The concept is briefly mentioned in "The Simpsons" (Moe tells Homer, " I was born a snake handler, and I'll die a snake handler") and in Netflix's "Teenage Bounty Hunters." Then, in 2019, Goggins — again! — and Olivia Colman starred in "Them That Follow," a drama/thriller about a Pentecostal sect that incorporates snake-handling into their services.

In these fictional accounts, the snake handling characters serve, with varying degrees of subtlety and success, the scripts in several ways: their churches are typically based in the American South or Appalachia, a detail that is true to life but, depending on the depictions, can come bundled with tired and damaging stereotypes about those regions. There's often an element of charlatanism associated with the handler's act, a nod to both the hypocrisy that sometimes bolsters self-appointed religious power.

At their best, these depictions provide an opportunity to illuminate the very human desire to have enough faith in something — love, a way of life, God — that they would be willing to put their physical bodies on the line. At their worst, they portray the congregants who were duped as culturally backwards and ignorant punchlines.

These are the threads that HBO Max's new documentary "Alabama Snake," directed and co-written by Theo Love, could have pulled into the real world. The premise is there, as it delves into the events surrounding the conviction of Pentecostal preacher Glenn Summerford after he was found guilty of attempting to murder his wife, Darlene, with a rattlesnake that he used in church services.

Unfortunately, the film is so tightly coiled around atmospheric re-enactments — which are undeniably evocative, but stagnating — and an undulating "he said, she said" narrative, that it fails to deliver much of a bite.

"Alabama Snake" opens on the two parademics who answered the 911 call from Darlene. They detail how they found a woman with a serious bite on her hand, staggering down a remote road. The paramedics didn't have anti-venom and neither did the local Scottsboro emergency room, so they rushed her to Birmingham 90 miles away.

Darlene survived and, once she was fully healed, immediately accused Glenn of forcing her at gunpoint to stick her hand in the snake enclosure in their backyard shed. Why? There are shades of the same answer offered throughout the documentary: it was a test of Darlene's faith after she had strayed from their marriage, or it was punishment for Darlene's serial infidelity, or it was retribution for her molestation of Glenn's two young teenage sons.

The filmmakers never press Darlene on that last accusation, which is presented in on-screen text during a cutaway scene and is corroborated by one of Glenn's sons, though denied by the other. This is just one example of  unsettling details that are introduced into the narrative that provide context, but aren't fully explored enough to truly flesh out the narrative. Instead, it's a "Tiger King"-esque pileup of weirdness where, if one was recounting the documentary by memory, they'd have to pause again and again to say, "Oh my god, and this happened, too."

There's a brawl where Glenn allegedly punches someone's eyes out of their sockets. There's a still-unsolved house fire that killed his toddler daughter (that is potentially related to the man losing his eyes, but there's no proof). There's divorce and deception and finding Jesus.

And don't get me wrong, I like weird — but in a documentary, weirdness needs context. "Alabama Snake" tries, but it focuses on the wrong things.

There are lengthy  —and sometimes mildly cartoonish — re-enactments that focus on how Glenn's stepfather taught him how to fight and how that training, combined with alcoholism and personal tragedy, may have transformed him into an irredeemably angry man. The filmmakers interview a court stenographer, who offers some context about what Glenn and Darlene said in court, but also pauses to explain how shorthand works.

We hear from present-day Darlene, but she seems deeply unwell. Her words are incredibly slurred (to the point her portions are subtitled) and she speaks of suicidal ideations and of being surrounded by and casting out literal demons. We hear Glenn's voice, as well, but it's from archived tapes recorded after his conviction.

The filmmakers try to introduce some level of ambiguity to the narrative; investigators found a suicide note written by Darlene, which she maintains Glenn forced her to write, and Glenn's family says that if he truly wanted Darlene dead, he maybe would have killed her. But as the narrative stands, there's no concrete reasons given to believe that Darlene is lying about the central story of being forced to place her hand in a snake enclosure.

In this form, "Alabama Snake" could have easily been titled "Alabama Gun" or "Alabama German Shepherd." The murder weapon is perhaps enough to lure someone into the story, but it's never parsed in such a way that viewers understand its true significance.

This is despite the fact that Appalchian historian Dr. Thomas Burton, who also produced the 1973 documentary "They Shall Take Up Serpents," serves as the film's main scholarly talking head. He introduces interesting ideas: the Biblical interpretations (or misinterpretations) that led to some Pentecostal sects adopting snake handling, the skepticism that some in the community had for Glenn, the notion that Glenn was put on trial more for his general religious practices than the individual crime involving Darlene.

But, by the closing credits, those concepts still remain a little murky. And while "Alabama Snake" has been advertised as being a story rooted in Appalachia, it falls short on identifying why fringe rituals continue to have a hold in the region, and how or if the town of Scottsboro was altered by the media frenzy that surrounded Glenn's 1991 conviction.

In the end, "Alabama Snake" is a cursory examination of a story with splashy characters and a weird true crime twist. For a fuller understanding of the topic, maybe pair it with Dr. Burton's 2004 book on the case, "The Serpent and the Spirit."