Director-writer Tara Miele creates a slippery narrative that shifts from life to death, and possibly purgatory 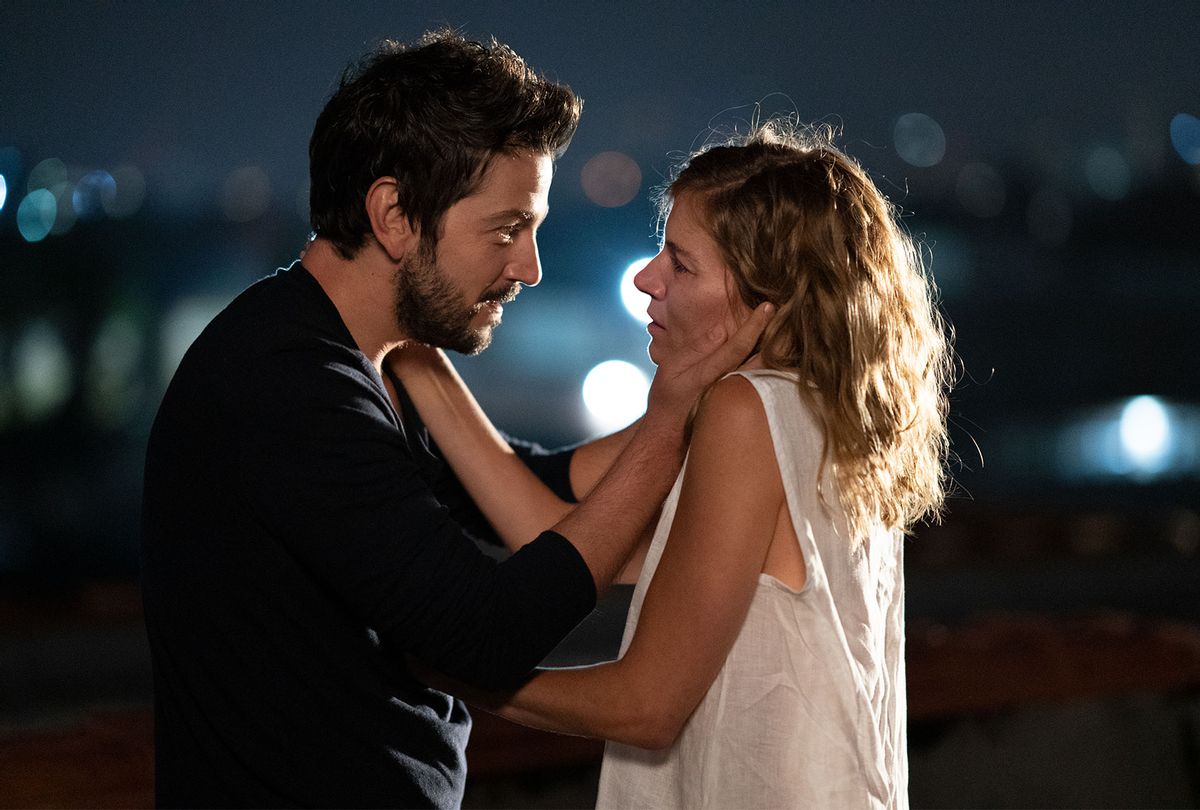 For films about trauma to work well, they have to make a personal story about someone processing grief not just compelling, but universal. With "Wander Darkly," writer/director Tara Miele does an admirable job of grabbing the viewer's attention. She also provides useful readings of her film as a story about the importance of truth in relationships, or even, perhaps, as a drama about managing mental illness. Miele does both of these things by creating a slippery narrative that shifts in and out of reality. This is both the film's conceit and its drawback. Viewers will likely be engaged by the action, but they may ultimately be disappointed by the resolution.

Adrienne (Sienna Miller) and Matteo (Diego Luna) are an unmarried couple who have just had a baby and bought a new house. But there is trouble in the relationship — unhappiness, suggestions of affairs, and other concerns about staying together. When they go out for a date night, they end up in an argument on the ride home and are unexpectedly hit by an oncoming car.

"Wander Darkly" then becomes a trippy story of Adrienne trying to determine if she is alive, concussed, or in some form of purgatory or limbo. Miele shrewdly creates different scenarios that guide Adrienne — and viewers — such as one where Matteo recounts their lives together. So, he tells her that the birth of their child, Ellie, was traumatic, and Danish doctors suddenly appear to discuss what transpired. He reminds her of their first date, who said "I love you" first, and the first time they had sex, in a candlelit room that catches fire. These scenes from their lives are meant to help Adrienne "make sense of everything," but the memories may contain lies.

Adrienne, she insists, recalls things differently from how Matteo does. Is her alternate reality the truth, or an imagined fantasy? There is a lovely scene of the couple in in the water at a beach in Mexico where Matteo admits that he wanted to propose, but he did not have a ring. Adrienne's response is that she would have appreciated that, despite her later remarks about not wanting to be married. But is this all woulda, coulda, shoulda? When Adrienne suddenly starts to bleed in the water and then the action shifts to her in a bathroom, it is hard to tell if it is a dream, a memory, or a psychotic break.

"Wander Darkly" does allow for multiple readings, which is good, but at some point, viewers may become exhausted trying to delineate reality, and let the film just play out. There are "clues" dropped throughout the film — a digital clock flashing "88:88" or a dark figure in a hoodie — that are explained in the end, but they fail to register as significant enough to puzzle out the meanings. Another scene involving a psychic's assistant predicting death, is perhaps a red herring.

Miele does employ some heavy-handed music and obvious symbols. A sequence at the "Urban Light" sculpture in Los Angeles, is used to visually convey the characters getting lost in a maze. When Adrienne is watching "Night of the Living Dead" on TV, Matteo observes that she hates zombie movies, to which she replied that she "feels like a zombie."

Better is a critical scene that has Adrienne parsing out the truth and lies as she and Matteo bump into Shae (Aimee Carrero) — who flirts with Matteo — at a Day of the Dead celebration. The film is strongest in moments like these, when it expresses how Adrienne and Matteo should have communicated more honestly, so they could love each other better.

However, a heated encounter between Adrienne and Matteo, where she exclaims, "Even my dying isn't enough to get you to step up," comes off flat, and unconvincing. Perhaps that is deliberate, but Sienna Miller's performance is uneven. She may understand Adrienne's confused mental and emotional state for every scene, but she is not always able to communicate that to viewers. Her blank stares and looks of despair are never not appropriate, so it becomes her default expression. In contrast, Diego Luna plays Matteo with tremendous conviction; he is often charming and largely sympathetic. Miller's character is, unfortunately, neither.

"Wander Darkly" features two scenes of Adrienne contemplating suicide that reveal her strain in processing grief and trauma. These moments suggest mental issues that need to be addressed with therapy, but there is no indication of that (and perhaps deliberately so).

And this is why the film wavers in walking the tightrope between personal and universal, engrossing and distancing. It is interesting to see how Adrienne — who needs to be in control — processes images and situations she does not fully understand. But the flexible storyline may frustrate viewers who try to want meaning in something that may be meaningless. Miele wants to have it both ways, and in the end, her ambitious and intriguing film only half works.

"Wander Darkly" opens in select theaters and on demand on Friday, Dec.11.