Based on the book "Good Morning, Midnight," the Netflix film offers an intriguing premise but wastes its cast 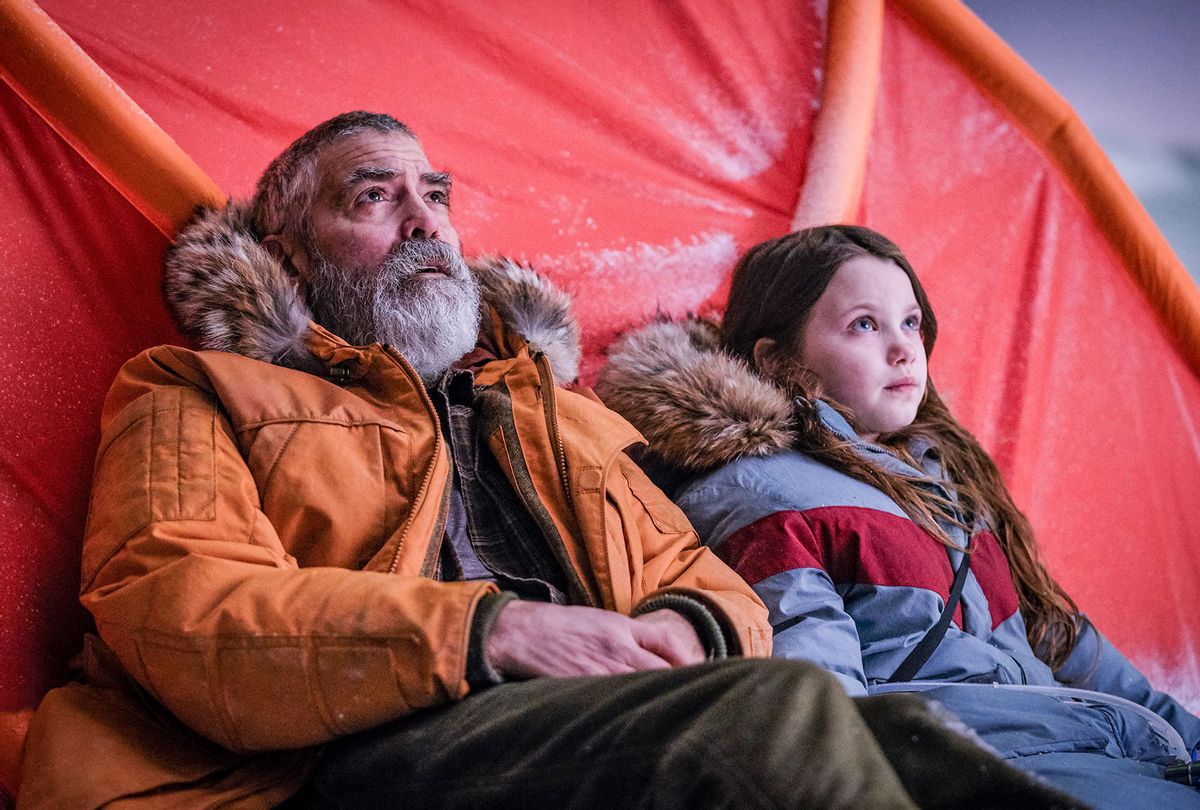 George Clooney and Caoilinn Springall in "The Midnight Sky" (Netflix)
--

"The Midnight Sky" opens with Augustine (George Clooney) in a sterile environment — the Barbeau observatory in the Arctic Circle. It is February 2049, three weeks after "the event," and he is alone, monitoring the spaceship Aether. The crew is returning home after a two-year mission to see if it the planet K23 "would be our future." (Things didn't turn out as they planned).

However, when Aether crewmember Sully (Felicity Jones) is unable to make contact with NASA, and the ship veers off course, Augustine decides he must trek across a frozen tundra to a weather station to reestablish contact because planet Earth is, well, as Augustine tells Sully, "We didn't take care of it while you were gone."

This story, based on the book, "Good Morning, Midnight," by Lily Brooks-Dalton, has the potential to be an interesting consideration of this apocalyptic scenario. But Clooney, who directs here, generates neither pulse nor point. His film has some visual flair, but too few emotionally engaging moments. "The Midnight Sky" is mostly a dull affair.

One of the problems is that the Augustine is more interesting than the story he is in. Flashbacks reveal him as a smart young scientist (Ethan Peck) who sabotaged his relationship with a woman he loved (Sophie Rundel). This may be why he is now a grizzled loner who takes pills with whiskey, gets blood transfusions, and vomits nightly.

But the plot has him realizing he is not alone. A young mute girl, Iris (Caoilinn Springall), has been hiding in the observatory. He shows her where to sleep, but she comes and stays in his room. She flicks peas at him during dinner to get his attention, and at one point laughs. c.

Only slightly more exciting is the (in)action on the Aether. Sully is pregnant by Commander Tom Adewole (David Oyelowo) and there is endless, unamusing banter among the crew members — Mitchell (Kyle Chandler), Sanchez (Demián Bichir), and Maya (Tiffany Boone) — about what to name the child.

"The Midnight Sky" does feature some impressive CGI, and there is a bit of nifty technology on display in a 3-D map Augustine consults, and the "virtual" experiences Mitchell and Maya have with their families.

However, the film does not really to come to life until a post-spacewalk sequence late in the film, when a character has suffered an injury and blood floats in the zero-gravity atmosphere. (Another terrific visual).  Alas, this episode, which generates some real drama, comes after a painful singalong to Neil Diamond's "Sweet Caroline" that most viewers will find "charming." (Can there please be a moratorium on the use of that earworm in cinema?)

Alas, a good chunk of the film's first half depicts Augustine and Iris' arduous trek through the Arctic tundra, and it is not tense but sleep-inducing. There is a curious scene of Augustine confronting a dying man, and a surreal moment when a safe place for shelter proves otherwise. But these set pieces are not very compelling. Yes, there's a gorgeous underwater sequence at one point, but viewers may be focused on the cold, wintry atmosphere and wonder why Augustine and Iris are not wearing any face protection. A sequence of them lost among the wind and snow, unable to see each other yields surprisingly little concern even when the shadow of an animal suggests danger.

The script by Mark L. Smith does not flesh out the characters much, even though the dialogue is, at times, quite didactic. A discussion the Aether crew has about slingshotting back into space is so familiar it is eyerolling. Likewise, when Maya expresses worry about her first spacewalk, what transpires is expected.

Equally poor is the music by Alexandre Desplat, which is often intrusive and used during the poignant or intense moments to tell viewers what to feel.

The film's narrative drawbacks point to the fact that Clooney is less assured as a director here. He delivers a decent performance as a man haunted by his past, so it is not as if he cannot connect with the material. But the film does not give the other actors much to do. Jones, Oyelowo, and Bichir all seem wasted, doing undistinguished work. Watching Sully and Tom play cards is a highlight if only because the two actors try to create some chemistry. Sanchez makes a decision late in the film that comes almost of out nowhere, until he explains himself, didactically, and then his decision feels forced.

"The Midnight Sky," does manage one nice, sentimental moment — an unusually soulful exchange between Augustine and Sully — but Clooney builds up to this almost by accident. Nevertheless, it shows what this lackluster film could have been.

"The Midnight Sky" is available to stream starting Wednesday, Dec. 23 on Netflix.