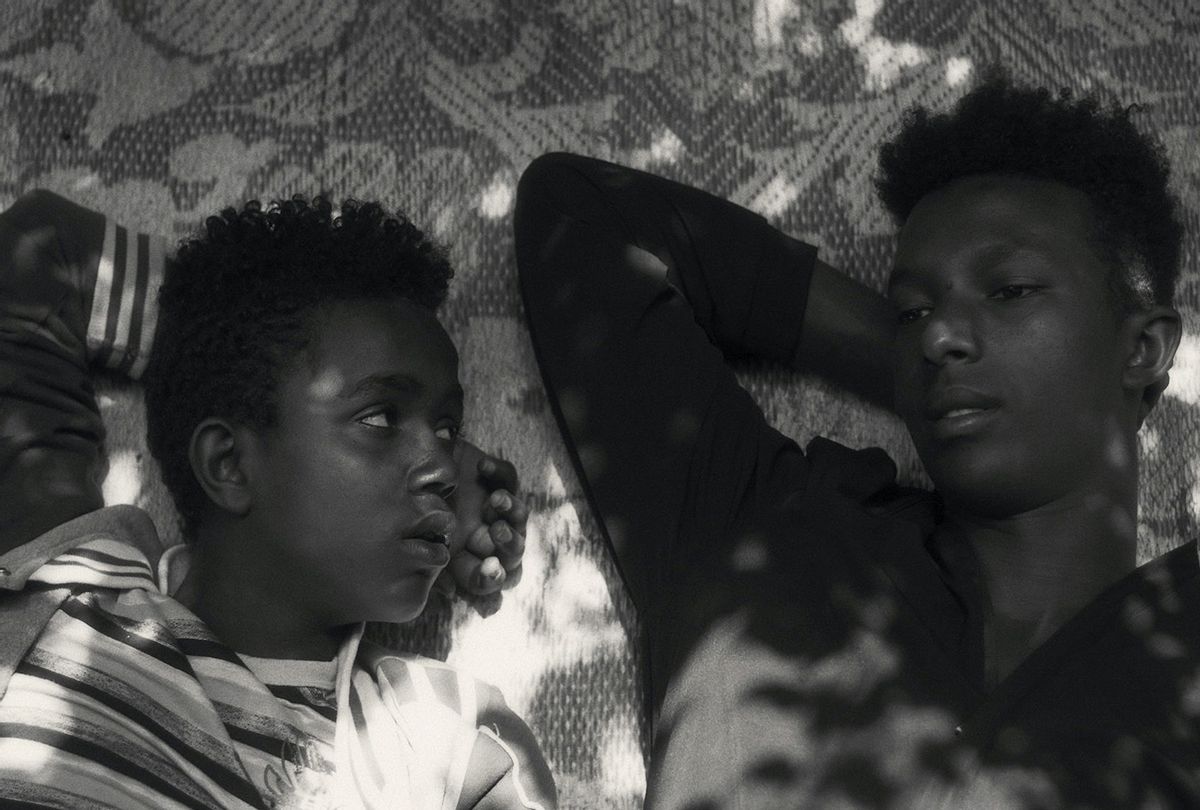 "Everyone chews khat to get away," says one subject in Jessica Beshir's leisurely, observational documentary "Faya Dayi." The film, which received its world premiere at the Sundance Film Festival this week, immerses viewers in Harar, Ethiopia, and a world where khat — a stimulant that is chewed and sometimes smoked — is king. It produces a high, known as Merkhana, and has become a cash crop.

Filmed in luminous black-and-white, "Faya Dayi" traces the harvesting of khat, which looks like tobacco leaf, by young men in the fields. They sing the title song, a hymn, in a call and response fashion and one cannot help but flash on enslaved labor. One man recalls growing coffee, but that changed, and was replaced by khat, which has become lucrative. Beshir's film is best when it takes an anthropological approach showing dozens of noisy men working, cutting, bundling, tying, and weighing the khat to transport it to market.

There are other spellbinding scenes. Two young men are seen constructing part of a house with adobe, and Beshir takes viewers along to rituals that involve blessings and the cutting of bread and rope. But these, like many of the episodes in the film are unexplained. "Faya Dayi" provides an excellent "you are there" experience. But it can be frustrating for folks who want explanations, or more detail. (Few of the subjects are identified in the film).

Beshir deliberately takes a hazy approach to her film, providing viewers with a sense of Merkhana. There are smoky images, wanderings around a walled city, images of young boys frolicking in water. Long takes feature an old man lying down, or a woman sewing to get a sense of the rhythms of daily life. The effect creates a tactile sensation; when a young man digging strips off his shirt and ties it around his head, one can feel the heat.

"Faya Dayi" is impressionistic, with artfully made compositions, such as two young men lying on a lacy cloth reminiscent of Malian photographer Seydou Keïta's work. There are many gorgeous images, such as a reflection of a body in water, a face illuminated by a lighter, or images shot in silhouette, or with shadows and light. (Beshir claims she purposely used black and white to take a step away from reality and create a dream-like quality.) There are also descriptions of lightness and darkness  – some seen through the lens of khat – that contribute verbally to this monochromatic scheme.

Small narratives slowly emerge. One subject in the film has returned home to his mother to help his family after his father died too soon. The 14-year-old Mohammed's mother left him, and his father's addiction to khat causes him to be abusive. The teenager is contemplating leaving Ethiopia to find his mother and he asks about the money and circumstances needed to travel.

In contrast, one man observes, "To be a migrant in a foreign land, is that luck?" adding, "We shouldn't have to perish in the deserts and the seas to change our lives." He likens working in a country that is not one's own to the love one might have for a stepmother, and notes that, "Every regime has kept us from working our own fertile land."

It one of many discussions about the struggles and oppression these Oromo men, disposed of their land, face in Ethiopia. Later someone insists the only wealth is in the farms. And yet another voice asserts that, "It is on our own land that we are dying, being imprisoned and forced into exile."

There are other voices in the film that are more poetic and less political. Fatima, a young woman, longs for her lover in a meandering narrative about loneliness. There is also a spiritual tale at the start of the film about an old Amir, Azurkherlaini, whose fear drives him to pray. He hears God tell him in a dream to find Maoul Hayat, the water of eternal life. This story weaves in and out in "Fata Dayi," like most of the voices in this mosaic.

But it all comes back to khat. Mohammed is told not to start chewing, whereas a troubled man is encouraged to chew to forget his pain. Some young men hope to finish their studies even if there are few opportunities awaiting them if they graduate. They will likely end up working in the khat industry.

Neither overtly celebratory nor critical — though it is, at times, both — "Fata Dayi" is Beshir's way of documenting the buzzy dreams and harsh realities that khat induces.