In "At the Ready," teens' path to Border Patrol & law enforcement is "akin to military recruitment" 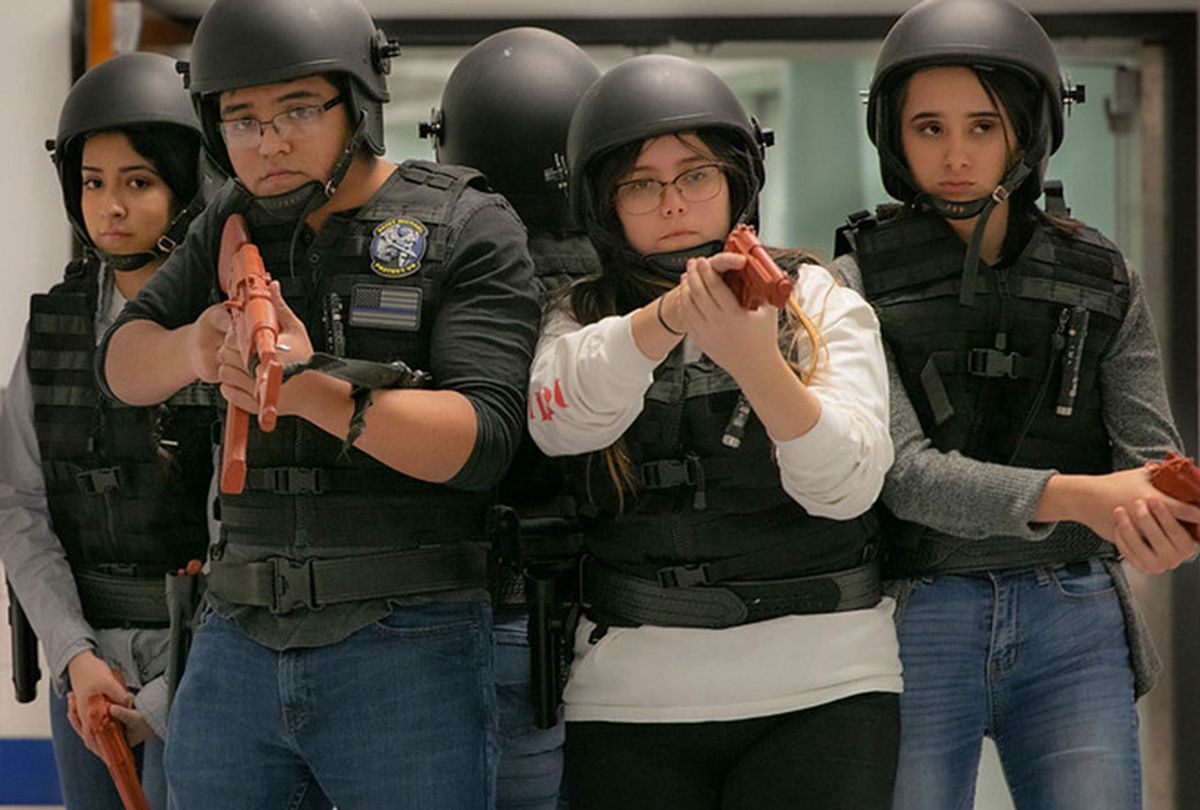 At the Ready (Forward Facing Films)
--

Law enforcement jobs — border patrol, customs, and corrections — offer a way for high school graduates in El Paso, Texas (and elsewhere) to earn up to $50,000 in their first year of work. At Horizon High, both classes and an extra-curricular club provide realistic scenarios for training students. The teachers are encouraging — although one admits to sugarcoating some situations and hiding his PTSD.

"At the Ready," which premiered Jan. 31 at the Sundance Film Festival, is Maisie Crow's enlightening portrait of three teenagers from the Horizon High program. Cristina, who is the first member of her immigrant family to attend college, is staying in El Paso to get her Associates degree. Her father, who came to America to give his kids a better life, earns about as much money as she will if she takes a Border Patrol job. Mason (Kassy in the film), a senior at Horizon, is the only son of a truck driver who works nights, leaving him alone most of the time. He finds a sense of family in the club. Cesar, also a senior, is caring for his younger brother since his mother works. His father is in Juarez and cannot enter the U.S. after being released from jail on drug trafficking charges.

These teens face parental pressures, but they also have concerns about their prospects of enforcing border laws as Trump's administration restricts immigration. Classroom debates focus on the deployment of the Texas National Guard at the border as the 2018 migrant caravan approaches, and there is a discussion of the 2018 Senate election race between Beto O'Rourke and Ted Cruz. In addition, the separation of children from their families at the border impacts Cristina, whose heart breaks when she witnesses 7- and 8-year-old kids having their American Dreams denied.

"At the Ready" shows how the program equips these teens to have discipline and think for themselves as they combat doubts and make critical decisions about their lives. Crow spoke with Salon about her documentary and the personal and political issues it raises.

How did you find the participants for the film and why did you decide to make a film about this subject?

I'm interested in things I don't know about. I try to get in and really understand what motivates the participants. I was really surprised when I was visiting a High School in Laredo, and I saw kids in the hallway with the red guns you see in the film. I was really taken back. It was 2017. Gun violence in schools and active shooters have been happening in schools since before Columbine. It was very startling for me to see kids in school with guns as part of a class. I started researching it. I found out there are law enforcement classes in about 900 high schools in Texas. I went to high school in Texas, and I did not have this program. So, I went down a rabbit hole, learning as much as I could. I learned that there were competitions, and I wanted to understand what it meant for the students going into those programs. Why did they go into programs, what did they get out of them, and how did program like this affect them as individuals? That coincided with the rhetoric of Donald Trump during that time. Because I live in the border region, I wanted to focus on a school on the border because these kids were not only learning about policing, but they were being asked some heavy questions that us as adults were struggling with. To look at it from teenager's perspective, it provided me with a very valuable insight.

What qualities do you think make for good law enforcement officer?

I think a good law enforcement officer is compassionate, interested in community policing, and their first focus should not be getting the bad guy. There needs to be more nuance in law enforcement. As a country, we are looking at policing in a different way. The protests this summer and George Floyd's death happened while I was in the editing process. I wanted to be back in Ms. Weaver's classroom where she was constantly having these discussions with students, allowing the teens to take sides and letting them debate what was happening in the world around them. This is something that I think the students would have benefitted from discussing and diving into critically.

How do you think the students are prepared to become good Border Patrol agents?

That was what was so eye-opening — at the end of the day they are students. I felt so protective of them. When Cristina, who is in Border Patrol Explorers and has this long dream of being in Border Patrol is confronted with the reality of child separation, you feel that coming-of-age moment. Things are not so cut and dry. Things are going to be complicated. I have to be a more hardened person if I am going to go in this career.

I'm from Corpus Christi, three hours north of the Border. I left Texas after college, and when I moved back, I was surprised to see so many Latinos in Border Patrol. I knew that was one of the talking points that I wanted to get into with some of the participants in the film — in particular Cristina, because she was so willing to talk about what she was feeling about things in ways I was not expecting. Her family was so warm and welcoming. They weren't afraid to discuss things that one might assume would be hard to discuss.

What are your impressions of the job recruitment efforts? They appeal to the teen's interest in exciting, well-paying jobs, but they also seem insidious, exploiting the students' Latino culture to help solve cases.

Any time a law enforcement agency is looking for an informant, they are looking for someone that is a part of the community they are trying to access information. I was more surprised at the lack of other career options at career day. There are other well-paying jobs that do not necessarily involve law enforcement. But it's true. If you speak Spanish and English, you can get a $50,000 a year job in any agency and that's a starting range. It is akin to military recruitment. A large number of kids want to go into law enforcement. That's the career respect they see.

What are your thoughts about a fact raised in the film that most Border Patrol guards are Latino, and civilians see them as the enemy, and even racist? This is a contradiction that these teens face.

Something that stuck out to me early on — and you see it in the opening of the film where Mr. Jimenez, one of the teachers, talks about law enforcement being family and the [after-school] club being family. It's an institution that is very insular and they are very supportive of each other because of the complications and conflicts that may arise from their communities or other communities that they come from. The teachers certainly made that clear. Another teacher says, "It's a rewarding job, you get to help people, but sometimes the people don't like you." There is an acknowledgement that law enforcement is not always liked. That is something that all of these kids, if they go into it, have to accept.

The realities of the job are sugarcoated by the teachers; one hides his PTSD while telling students about the adrenaline rush they get doing this work. How aware are the kids regarding what they are possibly getting into?

I think that was, especially with the competitions, something that surprised me. As a teen I would have totally gone into one of these clubs. It did seem so exciting, and the fun of playing pretend police officer really trumps discussion of some of the harsher realities of being in law enforcement. Mr. Jimenez has struggled with PTSD for a long time, and I think he was reluctant to share that with students for a number of reasons.

The students often feel pressure from their families who depend on them to help manage the family. What observations do you have about achieving this American Dream, and the teens' resiliency, adaptability, and the pressure they face "paying back" their proud parents?

I think Cristina in particular, was very captivated by what she initially learned in school about Border Patrol. Her parents were excited to see her have a dream that was a career, and she was confronted with some harsh reality. She really wants to make them proud and heard from her dad this makes him proud. But I think she can do anything, and they would be proud of her — as long as she's pursuing a career and growing into the person she would become. I think she creates the pressure herself. I don't see the pressure coming from her parents. They are genuinely proud of the young adult she has become. She is pressuring herself to make sure that they are proud. But they already are proud.

There are also outside forces in the form of politics that each teen considers as they pursue this career path. I like how they each developed a level of political engagement through their work. Can you talk about this focus in "At the Ready"?

When I started making the film, I didn't necessarily have a larger agenda in terms of incorporating the outside forces. But in Ms. Weaver's classes, the way she encouraged dialogue and debate on the hot button issues of the day, was very interesting for me. The first debate I witnessed amongst the students was the migrant caravan. I felt like I was like a ping pong ball. Their answers kept surprising me. You hear Irma say, "But Joshua lives in Juarez," and Joshua is saying, "We should close the border." That was the first time I thought we can use these moments to explore the nuance and the complexity of what being a teenager on the border during the Trump administration means. It's so much more complex than this black-and-white issue that is debated at a national level.

The program seems to be very useful in helping these youths focus on teamwork but also teaches them to think for themselves. Each subject faces an important decision point. What are your thoughts about the benefits of this program?

I think vocational training is always important, and I'm glad there is vocational training in schools. For these kids, really getting to discuss the issues that were playing out on a national level in a classroom setting and be able debate these issues and not be told that their opinion was wrong was always a positive for me. They had a family in the club.

For Mason, this provided a family, because he had no one at home. Even before he articulated it to me, it was clear that he could care less really about what he was learning in the program. He was more interested in the feeling of community and family he got. It was where he felt he fit in.