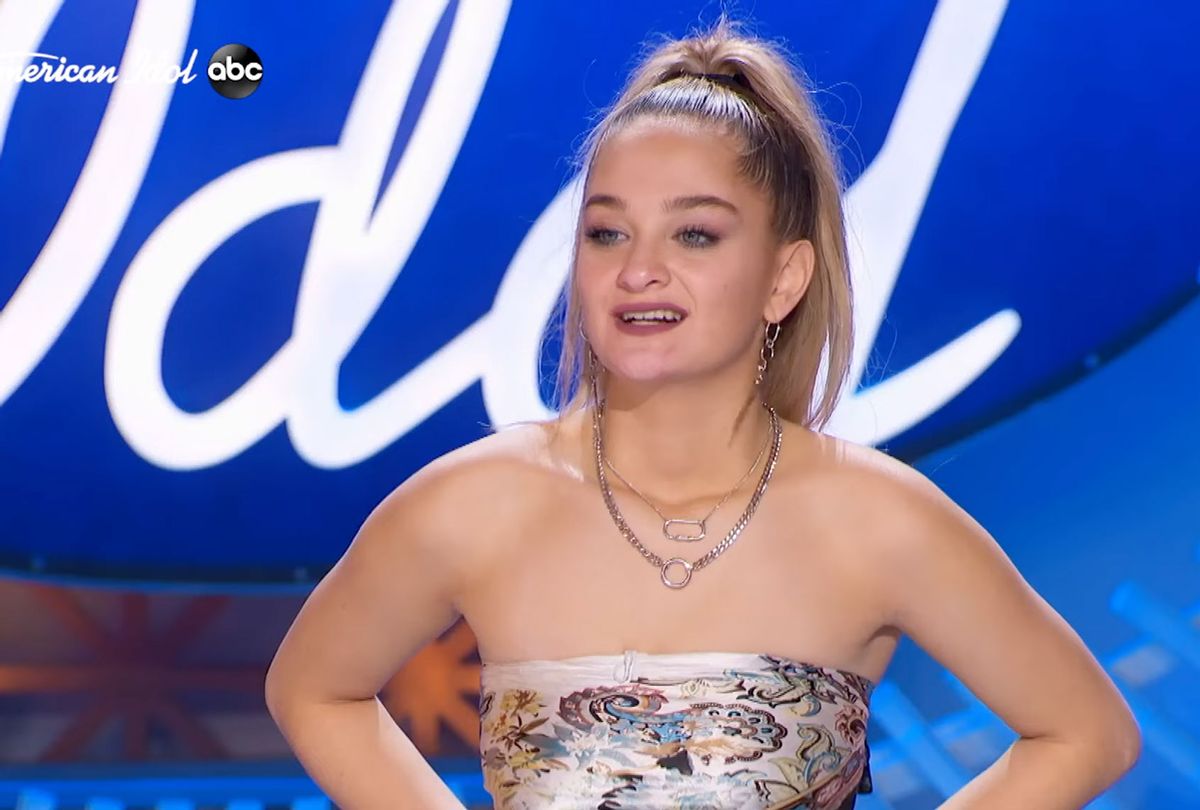 On Sunday evening, "American Idol" viewers watched as Claudia Conway, the 16-year-old daughter of  former Trump advisor Kellyanne Conway and Lincoln Project co-founder George Conway, auditioned to advance to the next round of the competition.

"Idol" judge Katy Perry asked if Claudia was okay, to which the teen replied, "No, but yes, I'm good." As Perry nodded knowingly, fellow judge Luke Bryan, who seemed confused, asked, "What am I missing?"

Claudia then formally introduced herself: "My mother is Kellyanne Conway. She worked for Donald Trump. And my dad is George Conway. He's a lawyer. He worked against Donald Trump. It's a lot, but, you know, I only want to spread love, and I love a compromise. And I do agree to disagree with my mom and my dad."

The infamous parents also appeared on the program; a teary-eyed George cheered from the sidelines while Kellyanne called in via video chat and offered a pep talk. She signed off with the statement: "Winners are people who are willing to lose."

Claudia did, in fact, advance to the next round after singing Adele's "When We Were Young." Before she began her audition, Perry urged her to think about her difficult past while she performed.

"It's like you lost your youth because you weren't able to experience it on your own without all of this noise," she said. "Your dad's your dad, your mom's your mom. Who is Claudia? You have to calm the storm that is around you."

It's the kind of advice that "American Idol" judges often trade in, variations on feel-good Instagram life coach captions like, "Be the energy you want to attract" and "The distance between your dreams and reality is action." Often, it seems pretty innocuous, if platitudinous — but in the case of Claudia Conway, the entire segment registers as deeply disingenuous in light of Claudia's allegations that her mother is "physically, mentally, and emotionally abusive."

The segment was filmed in November, long before Kellyanne Conway allegedly posted a topless photo of her daughter on Twitter in January, but after Claudia had announced on social media in August last year that she was planning on seeking emancipation from her parents "because of years of childhood trauma and abuse." Per Claudia, "American Idol" representatives reached out to her about auditioning after she posted a video of herself singing on social media.

And while it makes sense that, as the cultural power that "American Idol" once had over pop music has steadily diminished since its premiere in 2002, the show's producers would want to trade in on talent who come with ready-made narratives that include family drama underscored by political division, the inclusion of Claudia as a contestant both threatens to normalize her parents' political and private abuses, as well as continues the longstanding trend of exploiting young women in crisis as entertainment.

As an advisor to Trump for over three years, Kellyanne Conway comfortably lied to the American public with frequency, coining the phrase "alternative facts" in January 2017 after White House spokesman Sean Spicer's pitiful insistence that Trump had the largest inauguration crowd in history.

"Conway is almost as visible on television as Trump himself, and few members of the White House inner circle are more responsible for the hellscape we find ourselves in than she is," Bob Cesca wrote for Salon in August. "There's not a blurt, not a racist policy, not an unconstitutional trespass, not a crime against humanity that Conway hasn't managed to rationalize through her soulless, venom-spitting gift for toxic spin-doctoring."

After Claudia announced her plans for emancipation, both Kellyanne and George announced they would resign from their respective positions to spend more time at home with their children, but rumors about abuse in the Conway house only intensified as Claudia's TikTok — which originally went viral due to her videos criticizing Trump, his policies and, by association, her mother — was populated with a series of now-unavailable videos in which Kellyanne is allegedly heard calling her a "dumbass" and a "bitch" who is lucky her mother is "pro-life." She also appears to strike Claudia in one instance.

In late January, Claudia stated that a photo of her posing topless was posted briefly on Kellyanne's Twitter feed. In a TikTok, she stated that she suspected Kellyanne accessed the image months prior when confiscating her daughter's phone to use against her. Twitter and law enforcement are reportedly investigating whether the posting was intentional or a hack.

"I'm shaking, I don't know what to do," Claudia said in a video posted to social media. "I'm literally at a loss for words . . . if you see it, report it. My mom deserves to go to jail, that's unreal."

This prompted viewers to call local law enforcement and sparked the use of the hashtag #FreeClaudia. Claudia eventually walked back her original statement, saying "My mother and I, we fight like mothers and daughters, but we also love like mothers and daughters and I do love her." She insisted that she was not pressured to retract her statements and then went quiet — until she began promoting her appearance on "American Idol."

However, the troubling combination of Kellyanne's disgraceful political perversions and the allegations of abuses leveraged at both her and her husband, George, should still be fresh in Americans' minds. Kellyanne's sustained disinformation campaign is inexcusable, and while the details of the Conways' relationship with their daughter are understandably murky, there's too much disturbing content to be blithely ignored.

"As outsiders, we don't know what's going on . . . but it's very clear that something's not right there," Dr. Susan Sorensen, a University of Pennsylvania professor of social policy and director of the Ortner Center on Violence and Abuse, told Jezebel in January.

Collectively, that should be enough to dissuade network executives from featuring the Conways on primetime television, especially if they're using their daughter as a conduit to do so. As Salon's TV critic Melanie McFarland observed about Hollywood's penchant for casting Trump flunkies on reality TV, "television has the power to normalize, and while this has often been used in the service of good over the years, it has also resulted in grave harm."

This has been the pattern from the start. "Television normalized Trump in myriad ways during the years prior to his run for President and during the entirety of his campaign," McFarland continued. "But Trump was never a normal president, not from Day One. Along the way the rotating staff of characters surrounding him in the White House and his Congressional allies championing his absurdist evil have endorsed his corrupt deeds and continue to play a part intentionally mucking up the machinery of governance, even on his way out."

Yet "American Idol" softballed around who Kellyanne and George were, classifying Claudia in advertisements as a teenaged "social media sensation" whose parents were "high-profile political figures." Kellyanne's political dealings were largely greeted with a wink and a nod — in Claudia's pre-recorded biography, there was a brief clip showing Kellyanne embracing Trump — as were any hunts of more troubling family conflict.

Kellyanne and George were conveniently portrayed as doting parents. George choked up outside the audition room door and said, "I couldn't imagine anything that would make her happier than to do this," while Kellyanne tells her daughter that she's bursting with pride after her audition. It's a world away from the TikTok videos she's posted from her home and it raises the question of who they really are when the cameras aren't on at all.

Running parallel to concerns about the normalization of the Conways — Kellyanne, especially — is our collective, cultural hunger for stories of young women who are in crisis. From damsels in distress to messy tabloid-cover queens, there's always a market for exploitation as entertainment.

Claudia Conway's "American Idol" turn arrives during the ongoing buzz surrounding "Framing Britney," an FX and Hulu documentary that examines how Spears has been under a conservatorship, led by her father Jamie Spears, since 2008. This has given rise to the #FreeBritney movement, led by fans who want the public and legal system to more critically assess the arrangement.

But, as Salon reported, a dominant thread running through the film is the deep misogyny that shaped the public perception of Spears, which was only amplified by paparazzi intrusion.  Spears came of age during what were kind of the final "golden years" for paparazzi, before celebrities began utilizing social media as a way to connect with fans or bolster their image, and "Framing Britney" makes the salient point that the tabloids continued thrusting Spears into the spotlight again and again, and when the scrutiny became too overwhelming for her, used her mental health as a punchline.

For that reason, it's startling to watch the collision of the #FreeBritney movement with ongoing calls to #FreeClaudia. It shows how little we've progressed as a society when it comes to our inclination to thrust obviously hurting young women into the spotlight and turn them into caricatures for the sake of tabloid cover — or as a storyline on a dying television program.

That shouldn't be normalized, just as the Conway parents as an entity shouldn't have the opportunity to rehabilitate or normalize their reputations or career missteps on the back of their daughter's "American Idol" run.

Much like in the case of Britney Spears, everyone is profiting from the situation — Kellyanne and George, "American Idol" executives, viewers who are hungry for a messiness — except for Claudia, who is again, only 16 years old. For her sake, it's time to change the channel.