The novel on which it's based inspired the hashtag #wtfthatending? I'm left with the same question for new reasons 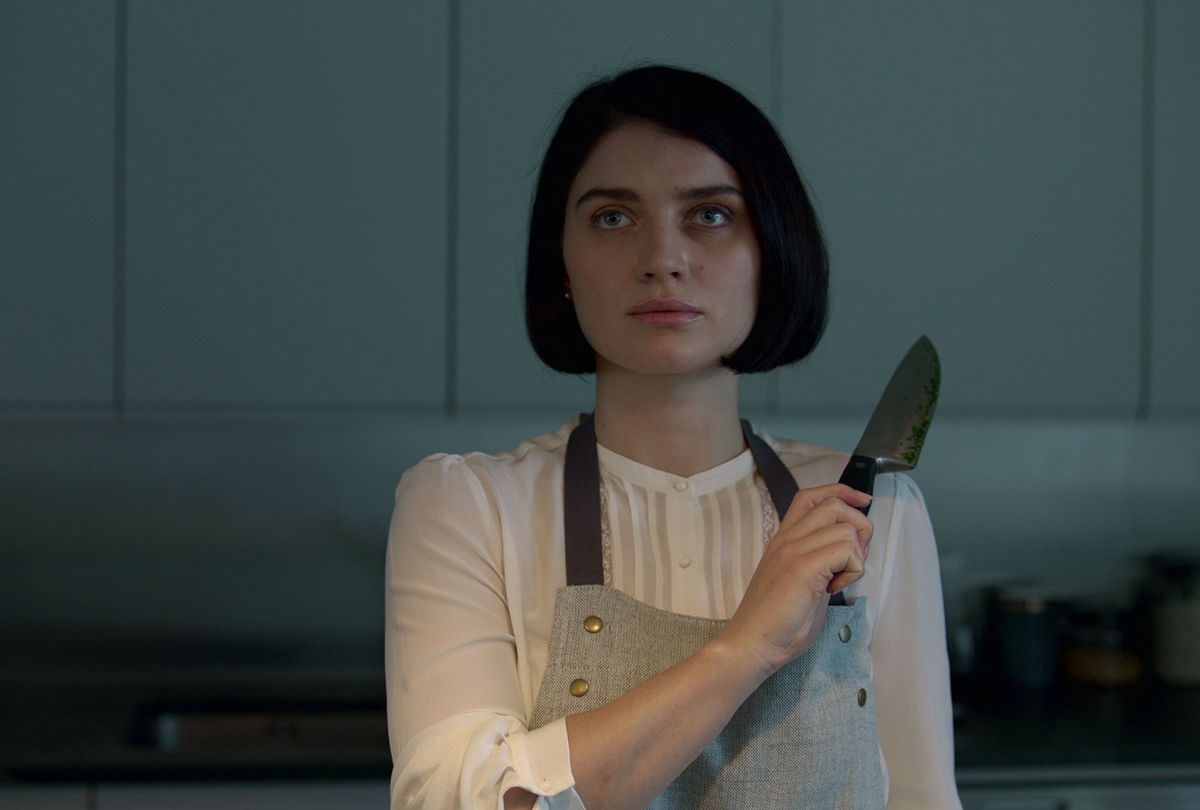 Eve Hewson in "Behind Her Eyes" (Netflix)
--

The following contains spoilers for the crazy, WTF ending of Netflix's limited series "Behind Her Eyes."

The limited series "Behind Her Eyes," one of the intriguing offerings from Netflix this month, begins as a taut psychosexual thriller that centers on a trio of people whose lives become entangled in an unexpected way.

Louise (Simona Brown), is a single mom who has an affair with her boss, David (Tom Bateman) and, unbeknownst to him, maintains a friendship with his alluring and inscrutable wife, Adele (Eve Hewson of "The Knick," "Luminaries"). As their respective relationships and loyalties shift, secrets and backstories are revealed in quick, looping flashbacks, some of which center on Adele's time in a rehab facility, where she met Rob (Robert Aramayo, aka young Ned Stark), a charismatic patient at the facility who quickly became enamored with her.

Halfway through the series, we break from the thriller formula and take a turn for the supernatural; we discover through those flashbacks that Adele is adept at astral projection — intentionally separating her consciousness from her physical body and buzzing around as a little luminescent orb to keep tabs on the people in her life — and that she can teach people like Rob and Louise to do the same.

Despite the occasional turns, there's a sense, however, that the characters in "Behind Her Eyes" are just kind of speed-walking towards the last episode. Even Netflix advertised the series by saying that it came "with a twist you'll *never* see coming (unless you've read the book, in which case: shhhhh)." That bizarre, last-minute twist is exactly what I want to talk about so, if you don't want to be spoiled, come back after you've watched all six episodes. 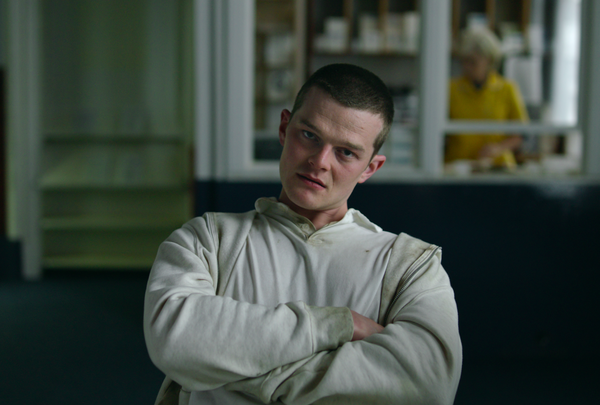 Rob Aramayo in "Behind Her Eyes" (Netflix)

In both the 2017 novel — which prompted the viral literary world hashtag #wtfthatending — and the limited series, Louise decides that she wants to save David from his seemingly psychotic wife, which causes Adele to snap. She injects herself with heroin after setting her house on fire. Louise astral projects into the burning home to see what is happening, while Adele, in turn, projects herself into Louise's sleeping body. She has thus taken over Louise's life, leaving Louise to burn in her own body.

But that's not all! The twist has a twist. It's revealed that Adele isn't actually Adele . . .  or at least she hasn't been for a while.

It turns out that after Rob learned to astral project, he actually took over Adele's body (killing his own with her soul in it; such a nasty habit) and therefore her life and marriage to David, whom he thinks is "pretty perfect." So, in the end, we're hit with the revelation that it's actually Rob who has traded in Adele's body for Louise's, and then — cue credits. Seriously, the writers of the series only give viewers about four minutes to sit with the fact that Rob has been Adele the whole time and that he is now Louise, riding off into the sunset with David after their subsequent wedding.

On one hand, "Behind Her Eyes" doesn't seem to take its own pulpy ending too seriously, so why should we? But let's be honest — there's a lot to unpack here when it comes to the incomplete and, in some cases, irresponsible stories the series tells about queer identities, race, and gender. Overall, the series is a faithful adaptation of the book, but there are a few key differences.

For one, in the novel, Rob's sexuality isn't made explicit until the final chapters, which helps serve the twist's element of surprise. In the Netflix series, however, Rob's attraction to David is depicted as being pretty overt — almost aggressive. This makes the ending a little less unexpected than the book's, but the implications of depicting any individual tricking a partner into sex are just as problematic. When that individual is queer, that just promotes old homophobic tropes. We've already been subject to decades of queer characters portrayed as villainous and duplicitous because of their sexuality.

And then there's the dangerous transphobic messaging. Although "Behind Her Eyes" never suggests that pre-swap Rob is a trans woman, the sex-transitioning body swap plot makes it impossible not to at least consider that some viewers will erroneously read the character in that context.

There is a long tradition in media of categorizing trans characters as, borrowing a term from California State University feminist philosophy and transgender studies professor Talia Mae Bettcher, "evil deceivers and make-believers." From "The Cleveland Show" to the 1992 thriller "The Crying Game," many forms of media use the identities of trans individuals as plot twists, or depict their sexuality as traps that cishet characters fall into.

Intentionally or not, "Behind Her Eyes" reinforces these ideas by positioning Rob, who is queer, as a villanous imposter — the underlying message being that David has been coerced or lured into having sex with someone who has misrepresented who they truly are. 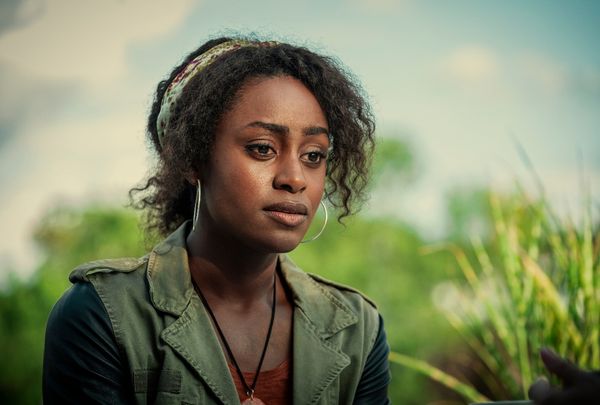 Simona Brown in "Behind Her Eyes" (Netflix)

This is all further complicated by the fact that Rob, a white man, opts to inhabit not just the body of a woman this time — which would introduce a conversation about the differences in power between men and women — but a Black woman. In the novel, Louise's race isn't overtly specified, although she has blonde hair. The most concrete physical description given of her is from the perspective of Adele, who notes that she is "prettier than she thinks and for the sake of half a stone she'd have a wonderful figure. Not lean and boyish like me, but curvy and feminine."

While so-called colorblind casting can be an important step towards more inclusive representation in media, "Behind Her Eyes" is a concrete demonstration of what happens when those decisions take place in a vacuum. The New York Times' Maya Phillips discussed this in reference to a 2019 revival of "Death of a Salesman" featuring a majority-Black cast.

"The trouble of a colorblind production might not be the casting itself, but the fact that the casting may still erase the reimagined characters' identities (If Willy Loman is Black, wouldn't he have a more complex understanding of the American dream?)," she wrote. "Careless colorblind casting — in animated roles, in live-action roles on TV, movies or the stage — assumes that identities amount to nothing and that all experiences are transferable, which is far from the reality."

We've seen it done well, such as how "Little Fires Everywhere" cast one character as Black, inspiring changes to the dialogue and dynamic between the two lead characters. In Netflix's soapy Regency romp "Bridgerton," however, the color-conscious casting didn't push far enough into the implications of how that changes affected the stories being told.

Meanwhile, the concept of white people taking literal control of Black bodies serves as the backbone of Jordan Peele's "Get Out" to chilling effect. In that movie, there's an underground transplant operation where the brains of white people are inserted into the bodies of Black people. They are reduced to empty vessels and they helplessly observe their captor carry out their former life from "the sunken place."

That was a film with a potent message about the simultaneous dehumanization and fetishization of Black bodies and experiences, but in "Behind Her Eyes," there's no room for nuance or introspection about the fact that Louise's body and agency is essentially usurped by a white man.

Part of this could be due to the fact that the "Behind Her Eyes'' writers' room — made up of "Hannibal" alums Steven Lightfoot and Angela LaManna, alongside the book's original author Sarah Pinborough — doesn't include any Black writers. Regardless of the reason,  Rob's transformation into Louise is revealed as a last-minute bombshell, one that completely disregards the lived experiences of a Black woman and mother that were lost in the transition. Just putting on her clothes are not the only adjustments he'll have to make because the world does not see or treat him – even in the guise as Adele – in the same way it regards Louise.

With a little more space, perhaps an additional episode, "Behind Her Eyes" could have pushed beyond just being a videotaped rehash of the #wtfthatending. In its final minutes, it introduces numerous power differentials that could've be explored more fully: those between men and women; between queer and cishet characters; between white men and Black women. Instead, it opts for a bizarre shock that's baffling at best and deeply tone-deaf at its worst.