The following contains spoilers from the first season of "All Creatures Great and Small" including the finale.

PBS' reboot of "All Creatures Great and Small" premiered just days after the Jan. 6 Capitol riots that shocked the nation and those watching news reports overseas. In the wake of that crisis, it was difficult to predict what appetite Americans would have for a series set in the 1930s Yorkshire Dales about a veterinary surgeon. Nevertheless, the update was an instant hit and – paired with fellow "Masterpiece" Victorian detective series "Miss Scarlet & The Duke" – eventually brought PBS to second place in viewership on Super Bowl Sunday.

Salon spoke to series writer Ben Vanstone, who was somewhat surprised at the degree to which American audiences have embraced the series.

"In the reviews, it feels like [critics] understood what we were going for – these really very small stories," he said. "But within those stories, the stakes can still be big. It's been a really good response on both sides of the pond, but I think it was more surprising seeing how well it did in America.

"It is very hard for me over here, locked in a room to comprehend that the Yorkshire Dales might be what America is interested in now," he added. "With the riots in the Capitol that was unfolding . . .  I think that was the thing that struck me was how many people felt that sort of gentle peril was needed at the time."

Even without an uprising, the manageability of "gentle peril" would have been appealing after living through a pandemic that had left millions dealing with loss, anxiety and isolation.

"With the pandemic, maybe it's a little bit more soothing to the soul," said Vanstone. "But I also think there's so many shows built around murder, villains. You'll have to try very hard to find a villain in this show. The success lies in that it really does have a slightly different tone to a lot of things that run at the moment."

Sunday's Christmas-themed season finale was filled with low-stakes drama that wouldn't move the needle on a daytime soap or even primetime sitcom. The most dramatic moment happens offscreen – when farmer's daughter Helen (Rachel Shenton) leaves her fiancé Hugh (Matthew Lewis) at the altar. But other than that, we see a little bit of smooching, a well-intentioned lie, a donkey suffering from an upset tummy, and a litter of adorable puppies being born.

That's gentle peril at its finest.

The episode closes with the residents of the veterinary practice at Skeldale House gathering in front of the crackling fire listening to King George VI's 1937 Christmas Day speech:

Let us turn to the message that Christmas brings, of peace and goodwill. Let us see to it that this spirit shall in the end prevail, and every one of us can help by making that immortal message a keystone of our daily lives. And so to all of you, whether at home among your families, as we are, or in hospital or at your posts carrying out duties that cannot be left undone, we send our Christmas greetings and wish you under god's blessing, health and prosperity in the year that lies ahead.

It's a moment of unity after a tumultuous year for England and echoes how we Americans in our living rooms are seeking messages of hope and warmth like those found in "All Creatures Great and Small."

Read on for the rest of the interview with Vanstone, who discusses the fallout from the finale, what's coming for Season 2, and the fate of Mrs. Pumphrey, played by the late great Dame Diana Riggs.

In the finale, Skeldale House holds a Christmas party with Siegfried Farnon (Samuel West) playing Father Christmas. Who thought of getting Tristan (Callum Woodhouse) in an elf's costume?

It was was Siegfried's idea because if Siegfried is in a Father Christmas costume there's no way he's letting Tristan not do something as well. Any opportunity to get his brother into a situation he might not enjoy, he will take it. We really wanted to push the Christmas theme in that episode and the thought of having Tristan dressed as an elf for pretty much the entire episode was just too delicious to to not to have really.

I think it's also something quite sad about it to have him in that costume. He's like a clown in the sort of a classical sense. He's funny, cracks the jokes and does the pratfalls but underneath it, there's a kind of sadness to it as well. And I think that the the facade of Tristan versus what's underneath, I think it was kind of really appropriate to have an elf costume, which is a mask in a way.

I always felt slightly cruel that I was always getting him to do this ridiculous things like kiss Tricki-Woo. I put in the script, "Sorry, Callum," because he's got to kiss Derek, who is a lovely dog and a real star – a little bit smelly as dogs go.

Later, we see that Siegried has lied to Tristan to spare his feelings – he did not pass both of his veterinary exams after all. He failed Parasitology. But lying about it seems counterintuitive for their practice. Is Tristan allowed to keep on working with the animals?

It wasn't until about I think, 1948 that you had to have a qualification to be a practicing vet. Actually, there was a lot of enthusiastic amateurs dotted around the Dales and other farming communities who would turn their hand to a bit of vet practice. So there's no legal impediment to him working; I would suggest there's a moral one. And obviously, that's a story which doesn't end there. In Series 2, we begin with Tristan unaware of what his brother has done. And, Siegfried, he's very much done this because he's so desperate to move forward in his relationship with his brother. 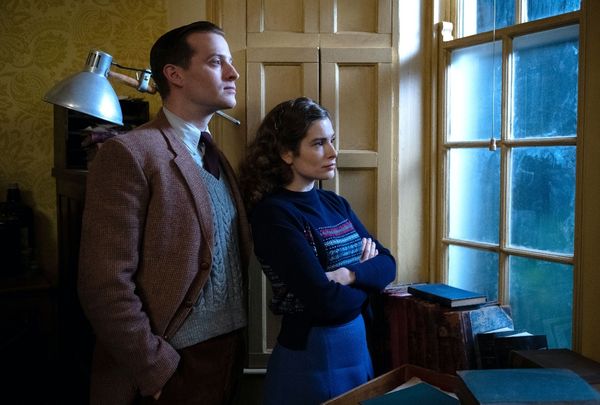 In the series, we see that James Herriot (Nicholas Ralph) – the pen name of Alf Wight who wrote the semi-autobigraphcal novels –has this unrequited affection for Helen, who at the end of the episode jilts her fiancé Hugh. But even though we all know where this is going, she didn't necessarily stop the wedding for James, right?

She's someone who has had a lot of choices taken away from her and her life, what happened to her mom. As for the relationship she's had with Hugh, he someone that she's very close to and known for a long time. It all kind of makes sense; he's a really nice guy, actually and seems like a good match for her. But maybe there's just something a little bit missing. I think you're right, I don't think she's fully aware of what she's feeling, I don't think she's getting too far ahead of her skis in that she fully understands where this is coming from. It's just that there's something there that isn't right with Hugh, and makes you feel that you shouldn't be going through with it.

And I do think that there is something quite sudden and surprising, which she isn't even fully comprehending about James. There's an intention to earn that relationship in a way between James and Helen. I think it'd be easy just to let them sort of fall together if people knowing the books understand where they end up, but we want to explore why they're together and and why they work with one another.

How far are you into writing and producing Season 2? How has the coronavirus restrictions affected production?

The final couple of episodes we're still working on but the majority of it is written. It's a very strange time to be doing anything with COVID. There's lots to negotiate and navigate with that. But in some ways, because of the animal welfare stuff that we have to do anyway, we have to be very careful with how many people are on set, who's around what animals. We had a lot of biosecurity in place to make sure everyone's boots are clean, and not taking anything onto farms that shouldn't be taken on. So we're not too badly set up for it. And the fact that we filmed quite a lot outdoors as well is a good thing.

We see that Mrs. Hall (Anna Madeley) can shoot and that's from her experience in the First World War. How much more wartime touches will we see with the Second World War encroaching?

Series 1 took place in 1937, Series 2 takes place in 1938, and if we get Series 3, that would take place 1939 and so on and so forth. There is a lurking sense of what's on the horizon. There are characters in there who are old enough to have experienced the First World War and they bring that experience with them and that will influence them moving forward with the Second World War on the horizon, which will which will play out in later series.

It's a nationwide effect in terms of shortages of food, and all those sort of people – in the books the young men of the village who are having to leave and sign up to do military service. And Donald Sinclair, who Siegfried is based on . . . served in the RAF as well. So we will certainly be touching upon that as we move forward, but the nature of the show will still very much be the Yorkshire Dales. We're not suddenly going to be in Arnham or somewhere like that. You'll see how most people didn't experience the war – most people weren't at the front and fighting it. They were still in villages and towns back home and they weren't all being bombed. And so for me, it's an interesting way to explore that huge event in history through that very sort of parochial prism of the Yorkshire Dales. 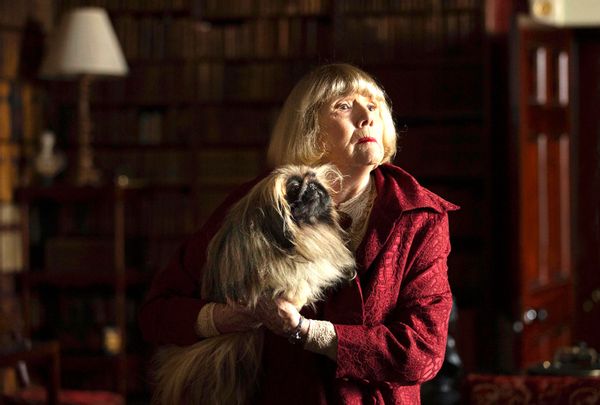 Unfortunately, we lost Dame Diana Rigg after the first season of her playing Mrs. Pumphrey. Is there any sort of farewell to her, a reference to her? Will we get to see her dog Tricki-Woo again in some form?

It's really sad that we lost Diana. She was such a really brilliant spirit for the show. Both on set and the performance she gave was brilliant and a perfect Mrs. Pumphrey. Tricki-Woo and Mrs. Pumphrey are iconic characters from the books, and in some ways we need to make sure we honor that as well. It's something that we're working around at the moment quite how to handle it. It's not something that we immediately leapt on how to solve because in a way Dame Diana was and is our Mrs. Pumphrey. We're going to have to find something to do I imagine to continue that character in some shape or form.

What other animal stories can we expect in the next season that we can look forward to?

There's a horse story that's pretty exciting and not quite as heartbreaking as Andante. You're going to see some lambs, which we couldn't do last year because we were in the wrong season. There's only a certain time of year that you get lambs. We start filming in four weeks time for Series 2. From about now through to late May is lambing season, so we should have some lambs for you.