"Coming 2 America" takes the crown, delivering a sequel worthy of & less patriarchal than the first 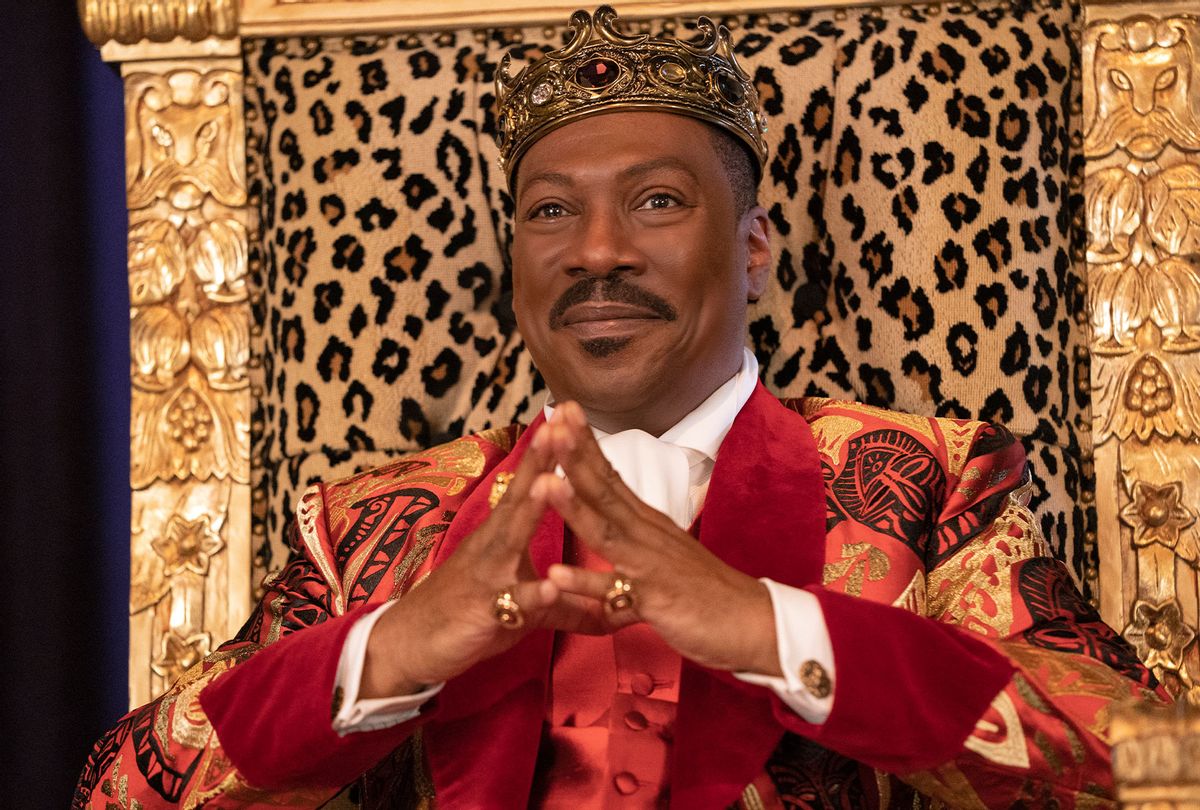 Thirty-three years separate "Coming to America" and its sequel "Coming 2 America," more than enough time for anyone who hasn't seen the original in a while to forget nearly everything about it.

Sure, a few strangely unforgettable lines from the 1988 film stick with us. Eddie Murphy and Arsenio Hall partner well as co-stars, but the many distinct personas they brought to life with the help of layered prosthetics, spirit gum and wigs ended up being most of the show. Sometimes the actors' faces were completely unrecognizable under all that latex augmentation.

But makeup magic alone isn't enough to carry a sequel; besides, I'd wager more of us recall laughing at the mention of Sexual Chocolate, simultaneously the best and the worst name of all time for a soul band, than the name of its lead singer played by Murphy. (That would be Randy Watson.)

To justify a comeback, one would have to expand on the original's virtues and sharply correct its mistakes. "Coming to America" glows with charm, which is why a lot of people harbor a lasting fondness for it. We can also admit that a number elements that didn't age well. The quintessentially '80s gratuitous boob shots, for one. The royal bathers' devotion to cleaning the prince's royal penis. Akeem's father, King Jaffe Joffer (James Earl Jones), gleefully admitting he screws the royal bathers. It's a whole thing, the royal bathers, and their emphasis exemplifies the casual sexualization of many of the women we see in the film other than Shari Headley's virginal lead Lisa McDowell.

This is the case even though Murphy's noble Prince Akeem Joffer, heir to the throne of Zamunda, holds distinctly progressive views compared to his father. Akeem declaring he wants a wife that challenges his intellect as well as stirring his loins, an equal marriage partner. Jaffe arranges for his son to marry the daughter of an adjacent kingdom's general who has been raised from birth to be pathologically compliant. Akeem orders her to hop up and down on one foot and bark, and that's the last we see of her.

"Coming 2 America" doesn't run away from any of this. Instead it evolves the jokes that worked more than three decades ago to create a story that honors its predecessor while making them over with modern, more equitable comedy that skewers outdated patriarchal traditions, both in Zamunda and in America.

As the story resumes Prince Akeem is on the verge of ascending to his kingship and with Lisa and his three daughters, Princesses Omma (Bella Murphy), Tinashe (Akiley Love) and Meeka (KiKi Layne), at his side. All of them strong, smart, respected and beautiful young women. Meeka, being the eldest, has been training to be queen her entire life even though Akeem's father reminds him that the throne can only pass to a male heir.

With King Jaffe on his death bed, Akeem's rule is threatened by General Izzi (Wesley Snipes, hamming it up to degrees not seen in some time) the vengeful brother of the fiancée Akeem left behind and in an uncomfortable state. Izzi, the ruling dictator over the adjacent nation of Nextdoria – seriously – is eager to depose Akeem and seize Zamunda's wealth for his own nation.

Akeem would be in a bind if not for a twist surgically implanted in the story thanks to special effects magic that rolls back the years on Murphy's and Hall's faces. The long and short of it is that thanks to Akeem's best friend Semmi's (Hall) horniness, the royal had a sexual interlude while blacked out resulting in a son he's never met: Lavelle (Jermaine Fowler), who is now 31 years old and living with his mother Mary (Leslie Jones) and uncle (Tracy Morgan) in Queens.

Murphy's acting style has matured, as people saw with his work in "Dolemite Is My Name," and so has his portrayal of Akeem. There's very little of the youthful clownery in this iteration of his royal, which leaves more room for other players to take up space.

By expanding its ranks to feature more famous comedy performers with large personalities "Coming 2 America" broadens its joke tapestry beyond everything Hall and Murphy serve up, and that makes the setups edgier and more plentiful. Jones plays beautifully off of Morgan and Luenell, another member of Lavelle's Queens family, but she also gives Headley's Lisa a chance to have more fun this time and break free of the behavioral constraints placed on her in the first movie.

And this revitalized energy doesn't solely reside in the palace – narrating the political instability created by the royal succession drama is a cable news anchor played by, who else, Trevor Noah.

This is a decidedly post-"Black Is King," post-"Black Panther" sequel mindful of details and callbacks without being beholden to them to the point of rehashing old jokes and reprising previous roles in a way that checks boxes off of a list.

More to the point, it's also a post-"Black-ish" version of this story, owing to that show's creator Kenya Barris joining forces with the team behind the original, Barry Blaustein and David Sheffield. Barris' touch along with Murphy's makes all the difference here, creating a story that feels more up-to-the-minute than vintage "Saturday Night Live." (Blaustein and Sheffield were writers during Murphy's heyday on the sketch series and wrote some of his biggest movie hits, including "Boomerang," "The Nutty Professor" and "The Nutty Professor II.")

Flamboyant, boisterous musical numbers amplify the energy throughout, and the cameos sprinkled throughout are love letters to the original movie's fans. Yes, the royal bathers are still part of palace life, but this time everyone gets to be in on that joke.

Model and actor Garcelle Beauvais also returns for this one, still a royal rose bearer as she was in the first film, one of her earliest movie roles ever. Other celebrity appearances aren't reprised roles but ones that echo the time from which the original hails. Salt-N-Pepa, En Vogue, Gladys Knight all get to play in the royal court, but it's the lesser known faces who return to the scene that pack a wallop into the punchlines they represent.

The ornate sets and Ruth E. Carter's staggering costumes realize the image of Zamunda as a kind of lotusland of the Black diaspora – like Wakanda without the underground vibranium stash, but with a beloved fast-food restaurant owned by Lisa's father Cleo McDowell (John Amos) that is definitely not McDonald's and for some reason still employs Louie Anderson's Maurice.

Fowler picks up enough of Murphy's style of delivery and movement to make the audience believe Lavelle is related to Akeem while creating his own distinct personality. Layne's Meeka and Lisa and Akeem's other two daughters end up outshining Akeem, which is intentional. Where "Coming to America" was about a prince forging his own identity and seeking an equal partner in romance, the second movie critiques the ways age fades youthful ambition to change the world and break traditions that fail to make the most of everyone's strengths, regardless of their gender..

By recapturing the original's beats and crazy characters and remixing them to make sense in 2021 "Coming 2 America" telegraphs to the viewer that it knows exactly what it is and what it's doing. The writers make the most of their understanding that that the fairy tale they're peddling is utterly ridiculous, but no more than any romantic fable about princes finding love among the peasantry.

They're also having a hoot with building out this fictional African nation's story and convincingly linking it to the real world, guaranteeing the laughs come from a real and solid place.

Instead of redrafting old gags that don't fit modern sensibilities or worse, straining to recapture past glory, "Coming 2 America" confidently moves to the comedy rhythms of where we are now. And because of its willingness to transform it is a smarter, funnier and ultimately sweeter movie than the legend that begat it.