"Aretha" crowns the Queen of Soul in glory, thanks to star Cynthia Erivo's own genius

The new bio series delivers soaring musical numbers & killer costumes worth tuning in for, even if insight is scant 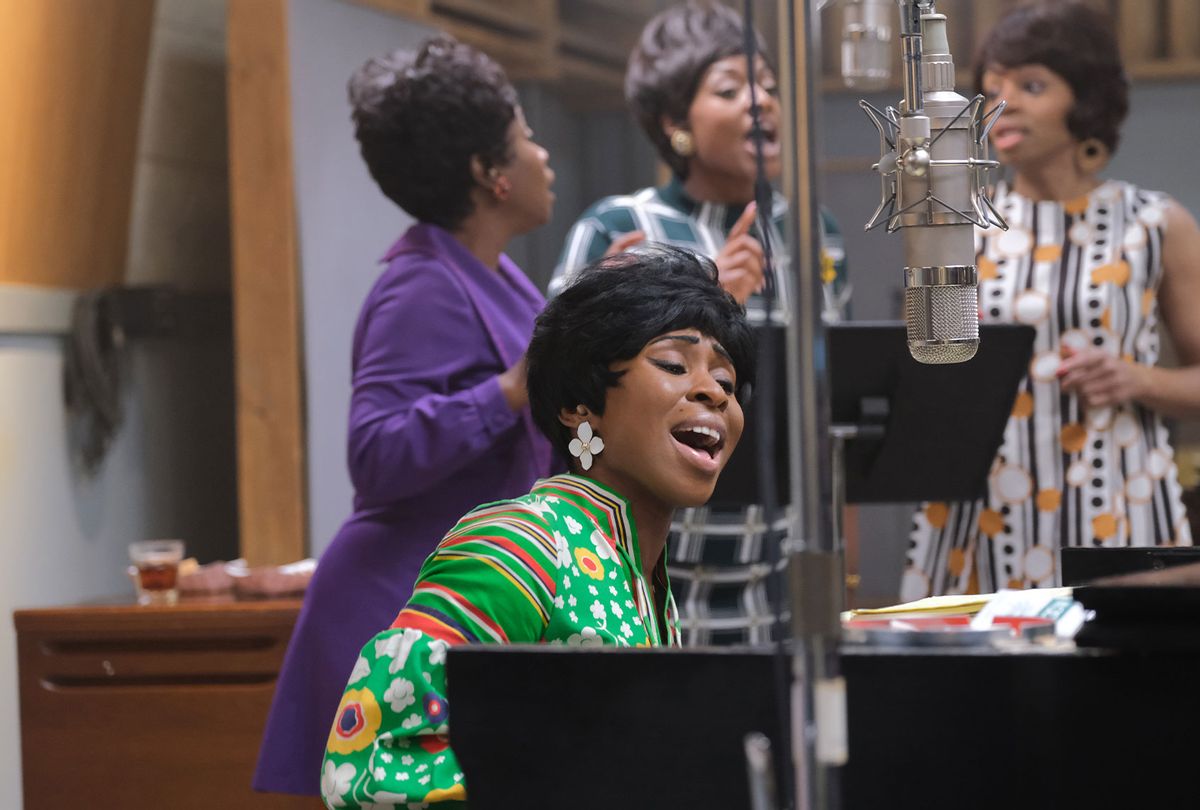 Aretha Franklin showed her genius to the world in 1998 when fate called upon her to replace Luciano Pavarotti at the 40th Grammys. The opera superstar was scheduled to sing one of his signature pieces from Giacomo Puccini's "Turandot,"  but half an hour after the show began he canceled due to illness. Desperate producers turned to Franklin after hearing she'd performed the piece for a benefit a few nights prior and with little preparation, she agreed to step in . . . and made history.

Franklin's "Nessun Dorma" marries the formal swoop and swoon of operatic emoting with soul's fire. You can hear it in her effortless riffs and runs within each measure, the way her voice curls around the orchestral melody. Then she seals her gift to the Grammys audience with the simplest touch, travelling between the original Italian and an English translation.

That moment isn't shown in the first seven episodes of "Genius: Aretha" but we do see the exchange that launches her towards it when a younger Franklin, played by Cynthia Erivo, meets the producer who changes her career, Jerry Wexler (David Cross). Aretha has serviceably crooned "Skylark" on "The Steve Allen Show" at a time when the singer was trying to be everything to everybody. Afterward Wexler doesn't pull his punches – he says he wasn't wowed. Aretha insists she wants to make hits.

"You'll get there," he says, "when you realize you're Aretha Franklin and nobody else." With that he starts to walk away, but Aretha isn't ready to let him go. She politely asks the pianist providing gentle cocktail hour music to step aside, seizes control of the keys and belts out a raucous, rock n' roll version of Mahalia Jackson's arrangement of the spiritual "How I Got Over."

Suddenly she's the center of the universe, the sun pulling Wexler back towards her and forging a partnership that will last for years.

No other performer but Erivo could persuasively radiate such passion. A genius in her own right with an Emmy, Grammy and Tony to her name, Erivo bends her style to conduct Franklin's voice through her body, and while hers isn't a precise impersonation, mimicry isn't the goal. She's embodying Franklin's essence in those scenes, body and spirit.

Listen to her renditions of some of Franklin's best-known songs (but not the ones that have been played to death, thank goodness) and you will hear the unique means by which the Queen of Soul transformed familiar songs into entirely new creations.

Luckily for the audience "Genius: Aretha" is stocked to the brim with such performances whether on stages, in churches, inside tent revivals or studios. Traveling between those venues is a cinch. Other structural choices are not as smoothly navigated.

"Genius: Aretha" is the third installment of the biographical anthology series from executive producers Ron Howard and Brian Grazer, and the first to feature a woman and a person of color as its focus. Franklin's seminal influence on modern popular music places her on par with previous "Genius" subjects Albert Einstein and Pablo Picasso.

Unlike these men many of the finer details about Franklin's life remain underexplored, leaving plenty of inner landscape to tour.

Past "Genius" versions played with (and up) the close personal relationships in their subjects' lives. In the Einstein and Picasso seasons that meant portraying the women they loved and bedding as reflecting their greatness instead of augmenting it.

This notion takes on irritating shapes in "Genius: Aretha" when the story presents the musician's relationship with her family and many of the men in her life as obstacles to overcome.

In the first seven episodes, "Genius: Aretha" trips back and forth through time, covering adult Aretha's career from her early successes in the 1960s through the Civil Rights movement and the disco era in the late 1970s, and journeying through her pre-teen childhood as Little Re, enlivened through Shaian Jordan's tender performance.

Little Re is the favorite the daughter of legendary Detroit pastor C.L. Franklin (Courtney B. Vance, who brings fire and brimstone to every line he drops), a widely beloved community figure and activist who coupled preaching on Sundays with drinking and womanizing on the other six days and nights.

C.L.'s role in Aretha's life is as troubled as it is puzzling. He recognizes his daughter's talent and takes her on his gospel caravan tours, but neglects to keep an eye on her, which eventually leads to her giving birth to her first child. Jordan conveys Aretha's talent and the joy in her singing, never letting us forget even in the darker moments that she was still very much a child when adults took advantage of her innocence.

But during these tours and parties at her parents' house when she witnessed performances from such stars as Sam Cooke and Dinah Washington, Little Re picks up the finer points of performing instead of simply singing, gaining confidence as she matures. It is in these detailed sequences where screenwriter and Pulitzer Prize-winning playwright Suzan-Lori Parks' stagecraft shines.

Once Aretha steps into her own fame C.L. maintains a hand in her career, but so does her first husband Ted (Malcolm Barrett), who is full of praises in one moment and bruising her in the next. We get an eyeful of Ted's two faces in the series opener, when Aretha is crowned the Queen of Soul by her adoring fans on the same night her husband lashes out at her.

These moments and people are part of Franklin's story, and like the "Genius" subjects that came before her, Aretha has an ego that sometimes crushes lesser entities in her orbit, including the chart-topping aspirations of her sister Erma (Patrice Covington).

Even so, we never get a clear sense as to why she keeps Ted around for so long, or lets C.L. enjoy such an outsized presence in her career long after she has grown beyond them. You'll want to watch "Genius: Aretha" despite all these dropped threads because Franklin's music and Erivo's masterful portraiture (and the absolutely stunning wardrobe) overpower many of these errors.

In Erivo's hands the musical sequences soar, and enough of such scenes run throughout these eight hours to make the show worth devouring whole. But it's not an entirely satisfying experience because this third "Genius" suffers from the same core problem as the Picasso and Einstein seasons, which is that we see little to nothing that illuminates source of Aretha's genius.

To clarify, Franklin's music is the product of her genius, and Erivo's interpretations shine them to brilliance. But neither the inelegant dialogue nor the narrative progression allows us insight into how Franklin's mind works or uses artistic license to illustrate where her singular inspiration came from.

Instead Parks conflates artistic innovation with biographical examination. The two aren't mutually exclusive, but without highlighting specific sparks we don't get the benefit and drama of watching them evolve into greatness.

This approach may not be Parks' fault as much as the constraints delineated by the "Genius" brand since they're essentially the same problems holding back previous seasons. Einstein, Picasso and Aretha Franklin couldn't differ more from one another, and yet the flaws in the "Genius" telling of their tales are virtually the same: They fill artistically fertile or potentially consequential periods in their subjects' lives with trivia and never imaginatively express how those moments charged the art through and by which we know them.

Franklin died in 2018, and her memorial stopped the nation's collective clock. Millions mourned along virtually with the hundreds attending her service. The reason for that needs no explaining – her music threads through our lives directly or indirectly, through artists translating her soul into their own work. "Genius: Aretha" doesn't allow us to gain more intimate knowledge of who she is, but through its music we're at least reminded of why she deserves that designation, as does the woman playing her.