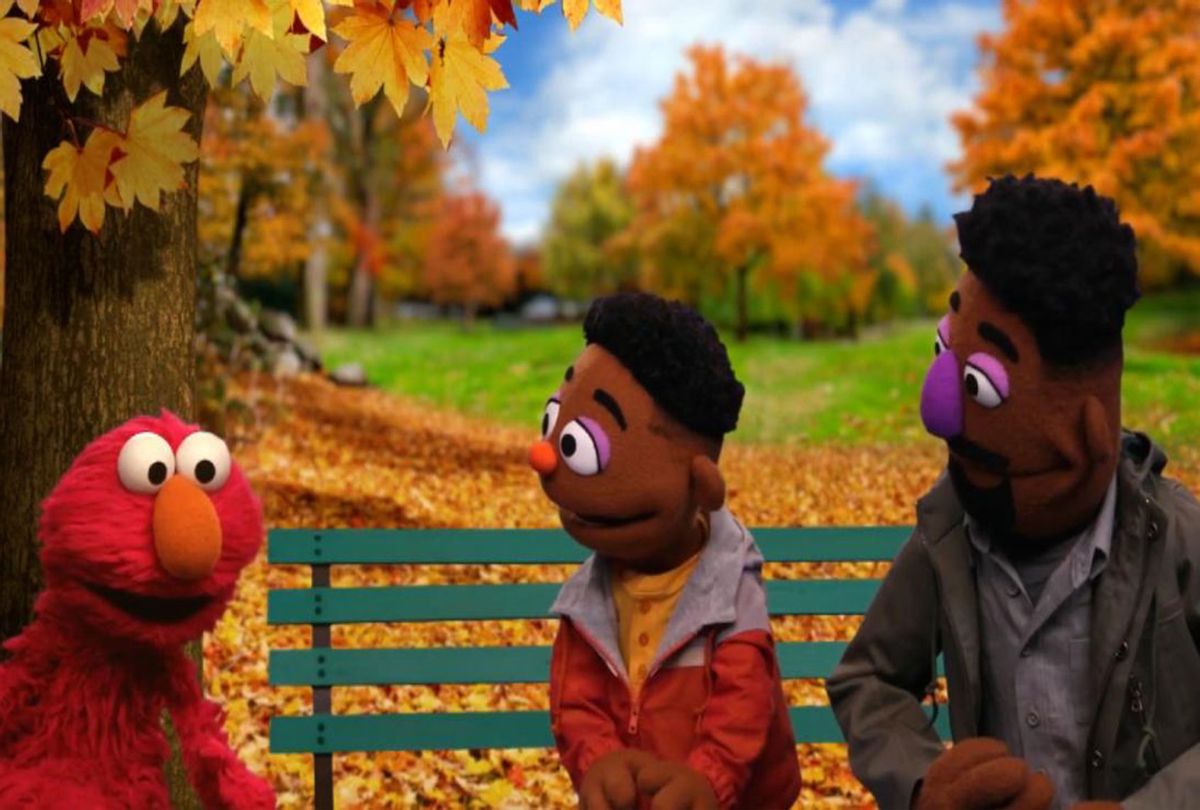 Come and play, everything's a-okay. You only have to hum a bar or two of the "Sesame Street" theme song to become instantly nostalgic for watching some of your favorite characters — Bert and Ernie, Big Bird, Oscar the Grouch, Elmo, Grover, Rosita — spend time learning the "letter of the day" and other lessons alongside guest stars and celebrities.

But since "Sesame Street" first aired in 1969, it hasn't solely existed as a weekly children's show. For over five decades, the series has both uniquely reflected and impacted culture in ways that are unprecedented for any piece of media, whether its for children or adults.

ABC's new 90-minute documentary, "Sesame Street: 50 Years of Sunny Days," (now on Hulu) explores some of the strides the series has made, behind-the-scenes decisions, and the show's plans for the future.

With the help of celebrity guests including Gloria Estafan, Whoopi Goldberg, John Oliver, Angelina Jolie, Lucy Liu and Dr. Jill Biden, the special dives into some of the challenging topics that "Sesame Street" has tackled, including racism, health issues, divorce, houselessness and death, as well as the ways its consistently strived to make all its viewers feel included.

Here are six of the biggest ways "Sesame Street" has impacted culture through its programming:

Since its inception, "Sesame Street" has been rooted in African American culture, more specifically the historically Black community of Harlem. This was apparent from the set design, to much of the show's music, to the diversity of its human cast — which was especially uncommon on children's television when "Sesame Street" first debuted in 1969.

"'Sesame Street' sees all the holes and just fills them," Whoopi Goldberg said while being interviewed about the impact of the series.

Throughout the show's run, there have always been lessons about diversity, but the series' current writers determined that, in light of our current reality, they needed to more clearly educate children about racism. As author Jelani Memory said, presenting a plot point about blue and red monsters disliking each other based on fur color — and hoping that kids, in turn, would extrapolate from that that racism is bad — was no longer sufficient.

In recent years, "Sesame Street" has included stories about discrimination, like when Rosita, a fuzzy blue puppet, was playing "Veo, veo" (or "I spy") at the grocery store with her mother when a customer told them to stop speakinrg Spanish. This made Rosita feel ashamed until one of the cast members informed her that speaking multiple languages is a beautiful superpower. She later provided an update that her mother called the store to discuss the incident and the manager had placed a sign in the window that said: "All people and languages welcome."

There was an episode that aired during last summer's nationwide Black Lives Matter protests in which Elmo's dad, Louie, teaches Elmo about protest and racism, explaining that "not all streets are like Sesame Street."

And this year, "Sesame Street" debuted two new Black puppets. There's 5-year-old Wes, who loves reading and architecture, and his father, Elijah, who is a 35-year-old meteorologist who enjoys movies and cooking for his family. The puppet for Elijah's wife, Naomi, is still in development, but in "50 Years of Sunny Days," it was revealed that she is originally from the Carribean, went to Howard University to become a social worker and loves living room dance parties.

"If you don't trust 'Sesame Street' to handle something difficult, I don't think you can trust anyone to do it," John Oliver said in an interview for "50 Years of Sunny Days."

The series has consistently given a space for children to process some of the hard, real-life topics that they are dealing with on a day-to-day basis. One of the most memorable segments is when Will Lee, the actor who played the beloved Mr. Hooper, died in 1982. The show decided to dedicate an episode segment to commemorating his death. It opens with Big Bird handing out drawings that he made of each adult cast member, but Mr. Hooper isn't with the group. They remind Big Bird that Mr. Hooper has died.

"I'll give it to him when he comes back," Big Bird responds, but becomes emotional when he is told that when people die, they don't come back. "Give me one good reason why this had to happen," Big Bird asks angrily.

It was a big moment in television because it taught children watching that sometimes bad or painful things happen for no reason, but there are people around you who can and will help you feel better. "Sesame Street" realized, Memory said, that "it was okay to make kids feel sad" when discussing these tough topics.

Since then, the series has introduced viewers to puppets like Lily, whose family is experiencing houselessness after losing their apartment. They have aired episodes with Karli, who is living with foster parents because her mother struggles with opioid addiction. They've introduced topics of illness and parental incarceration, as well.

"Sunny Days" also shares previously unseen footage from an unaired 1992 episode in which Snuffleupagus' parents get divorced. The producers worked meticulously on the episode, which was reviewed and approved by the Children's Television Workshop Advisory Council, but children in a test group had negative reactions to it. They were scared their own parents would get divorced and were unclear if Snuffy's parents still loved him.

They ultimately pulled the episode despite the cost, which is now cited as an example of the series "listening to the voices of children and by putting their needs first."

While people have long speculated about whether Bert and Ernie are a couple — for what it's worth, Sherrie Rollins Westin, the president of Sesame Street Workshop, said in the documentary that she regrets denying that they are — the show hasn't delved into sexuality, but it has long shown its characters challenging gender roles.

Maria, who was played by Sonia Manzano, worked a construction job and told a dismissive male puppet on the job, "I'm tired of you calling me 'little lady,' I have a name and it's Maria."

The song "It's All Right to Cry" communicates that it's okay for everyone, including boys, to express their emotions.

At a time when parents are starting to understand better that they cannot determine a child's gender, "Sesame Street" will no doubt continue to depict more inclusive storylines for children to see themselves.

"Sesame Street" broke ground by creating Kami, a puppet who was diagnosed with HIV

In 2002, "Takalani Sesame" — the South African version of "Sesame Street" — introduced viewers to a puppet named Kami, who was a 5-year-old girl with HIV. The puppet's inclusion in the program was intended to help reduce discrimination towards those who were diagnosed with the virus.

This was done in very simple ways. Kami shows a fellow puppet a memory box that her mother, who died of AIDS, left her. She explains that she was born with HIV, just like she was born with golden fur. "We know that we cannot catch HIV just by being your friends," one of the puppets responds.

In South Africa, the reception to Kami was great, however in the United States, far-right pundits, including Bill O'Reilly, said that the introduction of Kami's story was inappropriate for children.

It also introduced the world to Julia, a character with autism

In 2017, "Sesame Street" debuted Julia, a puppet who is depicted as having autism. As Westin told Salon's Matt Rosza in a 2018 interview, the character was part of the series' "See Amazing in All Children."

"That was one of the key hopes, that children who were on the spectrum would feel less alone by seeing a character they could identify with, but most important is also to show other children what makes Julia special, not just to focus on her differences," Westin told Rosza.

She added, "So the opportunity for us to raise awareness around autism, to destigmatize if you will, and to increase empathy and understanding, is something we believe Julia and 'Sesame Street' have a unique opportunity to do."

In "Sesame Street: 50 Years of Sunny Days," viewers get a behind-the-scenes look at how Julia was made.

"'Sesame Street' was made exactly for a moment like this," Jill Biden said of the series' pandemic-specific episodes.

From Elmo providing tips to kids about how to stay healthy and care for others by wearing masks and washing their hands, to Dr. Anthony Fauci fielding questions from the puppets about how the virus spreads, "Sesame Street" has met children's fears and curiosity about "the new normal."

It also is an apparent continuation of the series' initial mission to educate children in accessible ways, which was especially necessary as many children transitioned to non-traditional or virtual schooling environments.