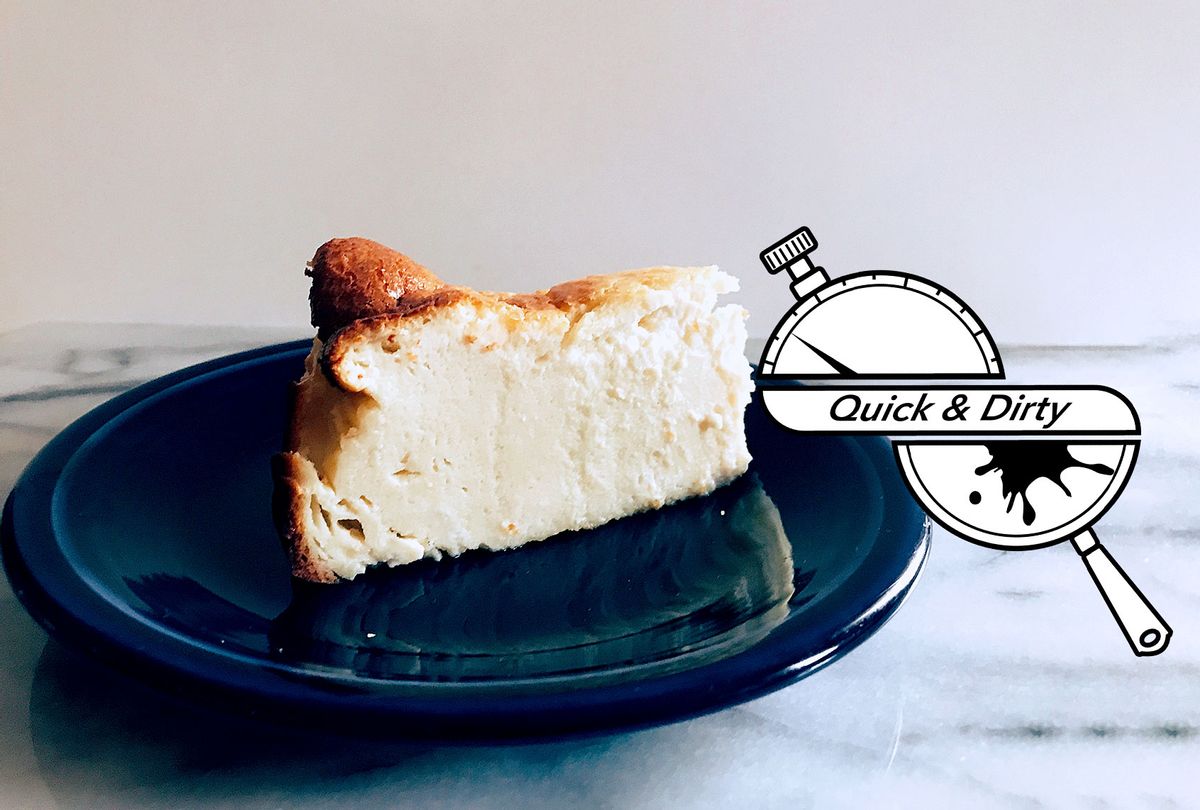 The cheesecake gene runs strong in my family. My cherished aunt was the supermarket type; she would sooner have not had ice in her freezer than not had a Sara Lee. My mother, an indifferent cook who rarely even ate dessert, one day decided on a whim to bake a cheesecake and continued to knock out creamy, crack-free showstoppers for years like she was born to do it. While I would rather eat cheesecake than anything, I never felt terrifically moved to bake one — until I met the cheesecake to rule all others.

A year ago, when my daughter's college went remote and she was sent home early, she arrived with a bag of dirty laundry and a request for something she'd seen online. It was the spring of Basque burnt cheesecake. Propelled by Molly Baz's intriguing Bon Appétit Test Kitchen video (currently at nearly 3 million views), the dessert became an early pandemic breakout dish. Was it the way Baz marveled that it was "literally the easiest thing I've ever done in my life"? Or that she also called it "the most impressive"? Or was it just that everybody loves cheesecake, and everybody loves burnt things?

RELATED: Salon Food talks to Molly Baz about cooking with confidence, rotisserie chicken and how to elevate our salad game

An internet obsession, the original tarta de queso was created a few decades ago by Santiago Rivera, chef of the bar-restaurant La Viña in Donostia-San Sebastián, Spain. Like Stanley Tucci, this thing is a late bloomer that deserves all of its current fame and glory. There's no crust, no water bath. It offers a generous margin of error for pulling from the oven. It turns brown when you bake it and slumps in on itself as it cools. If it cracks, so what?

In other words, it's impossible to mess up. The version I made this week may not be the most beautiful thing I ever baked, but I did throw it together during a Zoom call. Because this is the kind of cheesecake you can throw together on a Zoom call. It's the dessert that makes you feel like a person who can pull off dessert.

It's also insanely good, exactly as it is. It smells fantastic. It doesn't need graham crackers at the bottom, or sour cream on top. It doesn't require berries. Because it's so ridiculously eggy, it has an intense, custardy quality that means you can serve it unrushed at room temperature.

Nigella Lawson includes a recipe for the famed cake in "Cook, Eat, Repeat," and she declares, "I can't stop making this." Nor can I, Nigella. Nor can I. Nigella's version — like many others out there — uses less cream cheese than Bon Appetit's formidable two pounds, as well as fewer eggs. This makes it beautifully adaptable to the version by Adrianna Adarme from "A Cozy Kitchen," which forgoes the traditional springform pan and works perfectly for a regular cake pan. In other words, you have no excuse.

I like to make my Basque cheesecake with extra salt and extra vanilla because I'm a crass American. The traditional accompaniment here is a glass of Spanish sherry, and who am I to argue? It's also quite lovely with espresso . . .

Chef's Note: While this cake is amazing all by itself, you could do a lot worse than serving up a slice with some salty, sticky caramelized pineapple sticks.