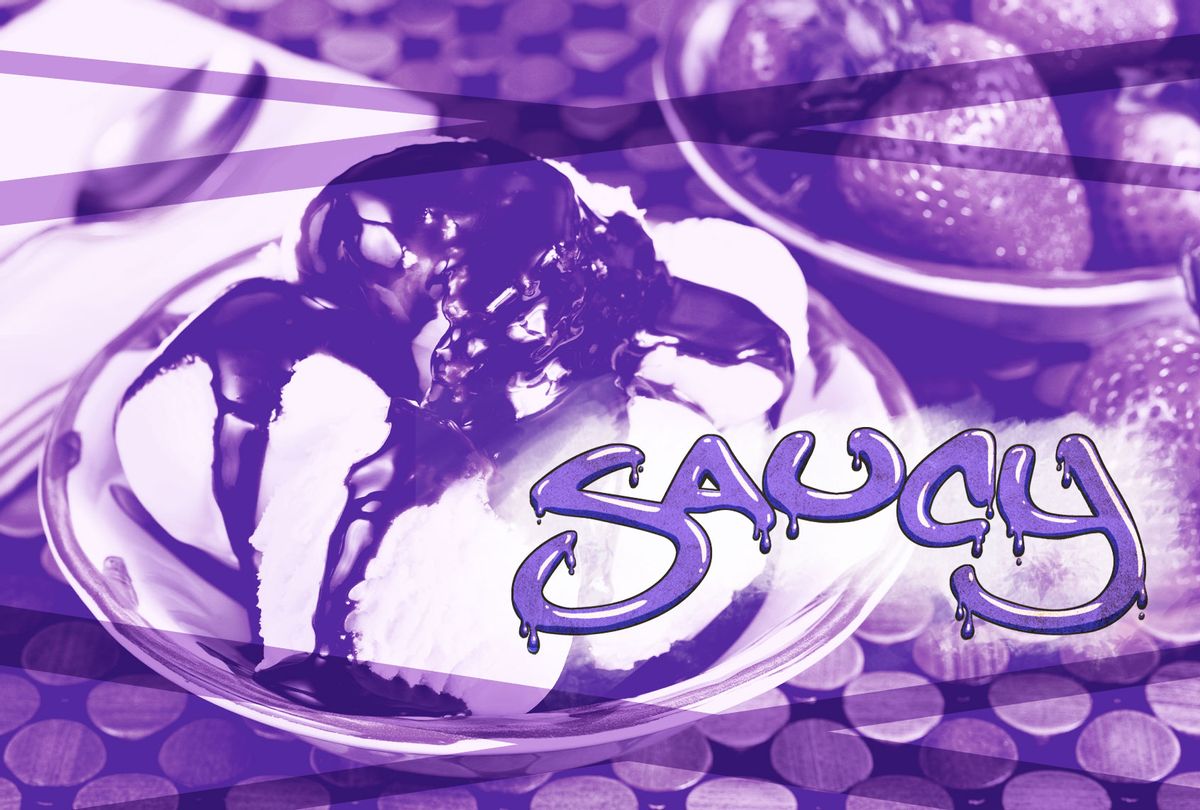 Welcome to what promises to be one of the sweeter weeks here at "Saucy," where we dive into chocolate sauce, which is, you know, the condiment of desserts.

Like many food items that are now soundly in the dessert realm — sprinkles' predecessor, comfits, are a good example — chocolate sauce was once lauded for its medicinal properties. As Maya Wei-Hass wrote for Smithsonian Magazine, tucked in the December 1896 edition of "The Druggists Circular and Chemical Gazette" was an advertisement for Hershey's cocoa powder.

Pharmacists would combine cocoa powder and sugar to brew a sticky syrup, which would then be mixed with the acrid liquid medicine of the day. At the turn of the century, however, chocolate syrup began to shift from treatment to treat. "It just seemed to naturally segue into all the ice cream [desserts] that pharmacists had to keep on hand just to stay afloat," pastry chef and author Stella Parks told Wei-Hass said.

This also dovetailed with the Hershey Chocolate Company turning their eye towards producing chocolate syrup for commercial use in 1926. According to the Hershey archives (which is a ton of fun to sift through, by the way), the company had been working on the ideal formula for more than four years.

In an interview, long-time Hershey Chocolate employee Chance Philips said that Milton S. Hershey, the company's founder, was exacting in his specifications for the final recipe.

"He would come up and say, 'Well, what have we done today? I want it done this way,'" Philips said.  "Sometimes he saw that I was discouraged. 'Well,' he would say, 'that's the way we do these things. You may make a hundred batches that don't suit me. The next may be just the way I want. Don't be discouraged.'"

When Hershey Syrup, which is still one of the best-selling chocolate syrups in the world, was first introduced to commercial users — like bakers, soda fountain owners and restaurants — it was marketed in two strengths: single and double. Single-strength was marketed for use in soda fountain pumps for making carbonated beverages. Double-strength was used for use as a topping and in milk drinks.

Two years later, they also started selling a single-strength chocolate syrup for home use, and as a way to reach housewives with their product, developed a dozen recipes using the syrup which, were distributed to magazines including "Good Housekeeping Delineator," "McCall's Magazine," "People's Home Journal" and "Women's Home Companion."

A later cookbook was published in the 1930s that included 55 recipes featuring Hershey's Chocolate Syrup, ranging from "never-fail chocolate icing" to chocolate icebox cake. I stumbled upon a physical copy of this cookbook a couple of years ago when I was visiting Bonnie Slotnick Cookbooks in New York. It made me realize that I hadn't ever considered the versatility of chocolate syrup beyond an ice cream topping and chocolate milk mix. It also made me realize that I could probably amp up the chocolate sauce that I do use at home.

Chocolate sauce isn't difficult to make in your own kitchen. A solid one only requires four ingredients, plus water, and about two minutes of stove time. Here's my recipe:

1. In a small saucepan, combine all of the ingredients. Bring to a boil, then reduce to a simmer, stirring until there are no lumps. Keep on heat for about 2 minutes, then take the pan off the heat.

2. As it cools, the sauce will thicken slightly. Once cooled, place in an airtight container or jar. From there, it can keep in the refrigerator for up to 2 weeks.

There are also some really simple things you can to enhance the flavor of store-bought chocolate sauce. Without a doubt, the biggest thing is to heat it up for serving over ice cream. A lot of people seem to leave the "hot" part out of the hot fudge equation, and they're missing out on a whole extra layer of deliciousness.

From there, you can add a simple ingredient or two to make it really pop:

Also inspired by the vintage Hershey cookbook, I hit upon a recipe for a simple chocolate mousse, where chocolate sauce — either store-bought or homemade — does most of the work for you. I like to top it with a fluffy cloud of homemade whipped cream, and in a nod to chocolate sundaes, chopped peanuts and miniature chocolate chips.

1. In a large mixing bowl, combine the mousse ingredients. Using a stand mixer with a whisk attachment, beat the mixture until fully combined and firm peaks form. Fold the chocolate mousse into either a large glass trifle bowl or into individual glasses, leaving room for toppings.

2. Allow the mousse to chill in the refrigerator for at least 2 hours and up to overnight.

3. Before serving, whisk — either by hand or using the standing mixer — the remaining whipping cream and confectioner's sugar until it thickens and soft peaks form. Use the whipped cream to top the chocolate mousse. Top the entire dessert with chopped peanuts and miniature chocolate chips.