A guide to what happens when your dinner becomes your enemy 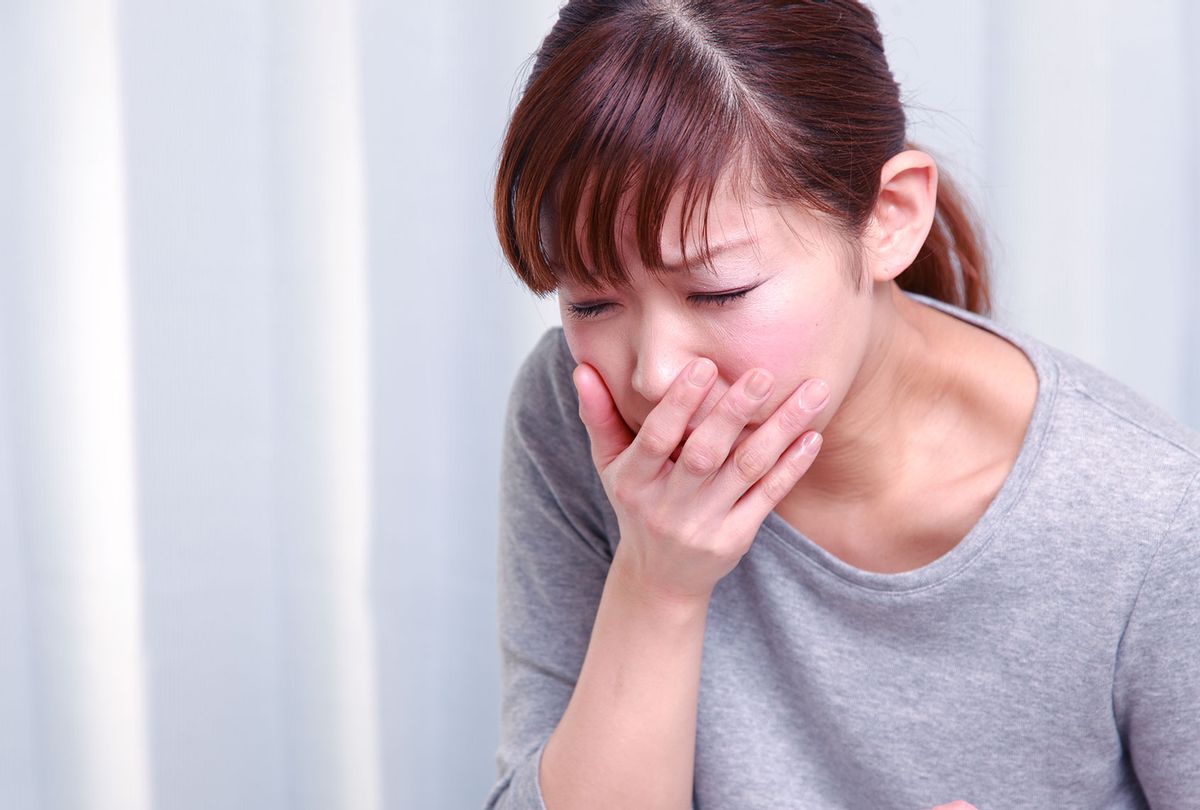 It started with an ominous rumble. I had earlier in the day made a simple salad for lunch with odds and ends from the fridge — nothing that smelled or tasted off, nothing that said, "Prepare, for I am going to wreak unholy havoc on your insides." A few hours later, however, I was curled up in bed, feverish, shivering and whimpering in pain. Have you ever had the kind of food poisoning where you throw up until you can't throw up any more, and then you brush your teeth and you throw up again? The kind where you wonder if you should go to the hospital, but also the thought of going to the hospital seems completely impossible? The kind where it's two days later and your abs are still sore? That.

I've had blessedly few experiences with food-related illnesses in my life and my travels. I also know the differences between the throat-tightening, face-flushing terror of an allergic reaction, the queasy aftermath of a debauched night of youthful partying and the "Bridesmaids"-worthy intestinal wreckage from consuming something contaminated. I can recognize those rare occasions when I'm hit with genuine food poisoning. But the phrase itself feels like a vague catchall for any number of symptoms, an imperfect descriptor for a complex experience. How is it different from a stomach flu? Do antibiotics help, or hurt? And what, exactly, had just happened to me?

Dr. Peter Bailey, a family practice physician and contributor for Test Prep Insight explains, "Food poisoning generally occurs when someone eats food that has been contaminated with infectious microorganisms, including mold, bacteria, viruses and other parasites." Contamination can occur for a variety of reasons. "When food is exposed to such infectious organisms in the preparation process or left to sit out too long," he says, "it can become extremely dangerous." This is why it's necessary to cook foods to their recommended temperatures, to keep hands, surfaces and implements clean, and to discard food that's past its prime. But that doesn't have to mean being excessively anxious.

I am admittedly pretty relaxed in my approach to what I eat, with a frat boy's tolerance for the takeout of unknown origin in the back of my fridge. I hate food waste, a massive and expensive problem, and I know that freshness dates are often just a generous suggestion. Trusting my nose and taste over a stamp on a product has usually served me just fine, even when an item is a little limp or less vibrant. And while most people would't choose to eat obviously off-putting things, The Spruce Eats reminds us that "Spoiled food isn't necessarily dangerous food." The risk, instead, is that sometimes food that appears perfectly safe is anything but. I've eaten plenty of funky cheeses and raw fish without incident, and I've felt like dying after episodes involving a restaurant fruit salad and a bottled kombucha.

In my mind, there's a clear line from my Sunday afternoon salad to my evening bout of worship at the porcelain throne. But it's not so open and shut. While I'd like to blame lettuce for all my problems, food poisoning can kick in anywhere from several hours to several days after exposure. It could have been the apple in my morning oatmeal, or even the chicken I'd eaten the night before. All of those foods, after all, are common culprits for different kinds of food poisoning. There are plenty of varieties to choose from. Salmonella often shows up in animal products like dairy, eggs and meat. E. coli, meanwhile, is found in raw produce and unfiltered water, while botulism can be found lurking in poorly canned and fermented foods. Then there's listeria, which can appear in things like smoked fish, melons and soft cheese.

"Listeria monocytogenes is one of the deadliest food-borne pathogens," says Dr. Bryan Quoc Le, a food scientist and author of "150 Food Science Questions Answered." "The bacteria actually invades host cells and survives inside them. As a psychotropic bacteria, Listeria can survive at nearly 0° Celsius [32° Fahrenheit] and so poses a threat even at refrigeration temperatures. Listeria can cause the condition listeriosis, which results in meningitis in newborn babies and gastroenteritis in others." It is one of the worst kinds of foodborne illnesses, especially for children, the elderly, immunocompromised and pregnant, with a hospitalization rate of 94% and a fatality rate of 20%.

Of the many known culprits for food based sickness, there is at least one which no longer applies. When I was a kid, "ptomaine" was synonymous with gastrointestinal distress, a shorthand for the after effects of a potato salad left out too long at the picnic. Taking its etymological roots from the Greek for "dead body," the word refers to amine compounds found in decaying organic matter. "Amines have a distinct odor that's reminiscent of cadavers," says Le, "and there was a belief in the scientific community that these amines were responsible for food poisoning. The theory was later debunked when it was clear that bacteria had a direct action on food poisoning, and amines were rarely involved." In other words, whatever else I may have picked up from my childhood school cafeteria, it was never ptomaine.

Food poisoning isn't even always officially food poisoning. "The common stomach flu, otherwise known as viral gastroenteritis, is an infection of your intestines. This virus is usually contracted through ingesting food or drink that has been contaminated with a virus, usually the norovirus, rotavirus, and adenovirus, or coming into contact with another person who has the virus," says Dr. Bailey. "The symptoms of both food poisoning and the stomach flu can be nearly identical. Both often result in stomach pain or cramping, vomiting, diarrhea, fever, nausea, muscle aches and headaches. While food poisoning generally only lasts several hours, the stomach bug can last two to three days." Another crucial difference is that the flu is contagious. For the sake of others, it's important not to initially presume your own bout of stomach trouble won't affect the people you're in close contact with, and to take precautions to avoid infection.

The severity of food poisoning varies based on how much a person has eaten, how tainted the food is and their own individual tolerance, but the worst of it usually abates in a day or so with simple home remedies of rest, fluids and simple, bland food. In some cases, antibiotics may be needed, but as Dr. Le warns, "Only food poisoning caused by bacteria can be treated by antibiotics, Sometimes, antibiotics can worsen the condition of food poisoning because they're nonselective and can kill beneficial bacteria living in the gastrointestinal system."

While rarely fatal, foodborne illness is nevertheless incredibly pervasive — and miserably disruptive. There's nothing like bravely trying to keep down a sip of Gatorade to put a literal cramp in your Zoom game. The CDC estimates that "48 million people get sick, 128,000 are hospitalized, and 3,000 die from foodborne diseases each year" in the US. So how do you know when a gross but endurable situation requires medical intervention? "Get medical attention if you show signs of dehydration such as dark urine, low blood pressure, dizziness, confusion and extreme thirst," says Dr. Chris Airey, a practicing physician in the UK. "Any serious symptoms such as diarrhea for more than 3 days, extreme stomach pains, blood in your poop or vomit, high fever or throwing up liquids is worth a visit to the doctor."

After one of my own most unpleasant 48 hours in recent memory, I bounced quickly back to normal. I'm humbled, though, by how quickly and entirely without warning food poisoning can attack. I know a little more about why it happened to me, and how to prevent it in the future. And after the things I've endured, it's going to be a long time before I want to get anywhere near a salad again.