My virtual life as a jam maker in "Stardew Valley," where small-batch food takes down Big Business 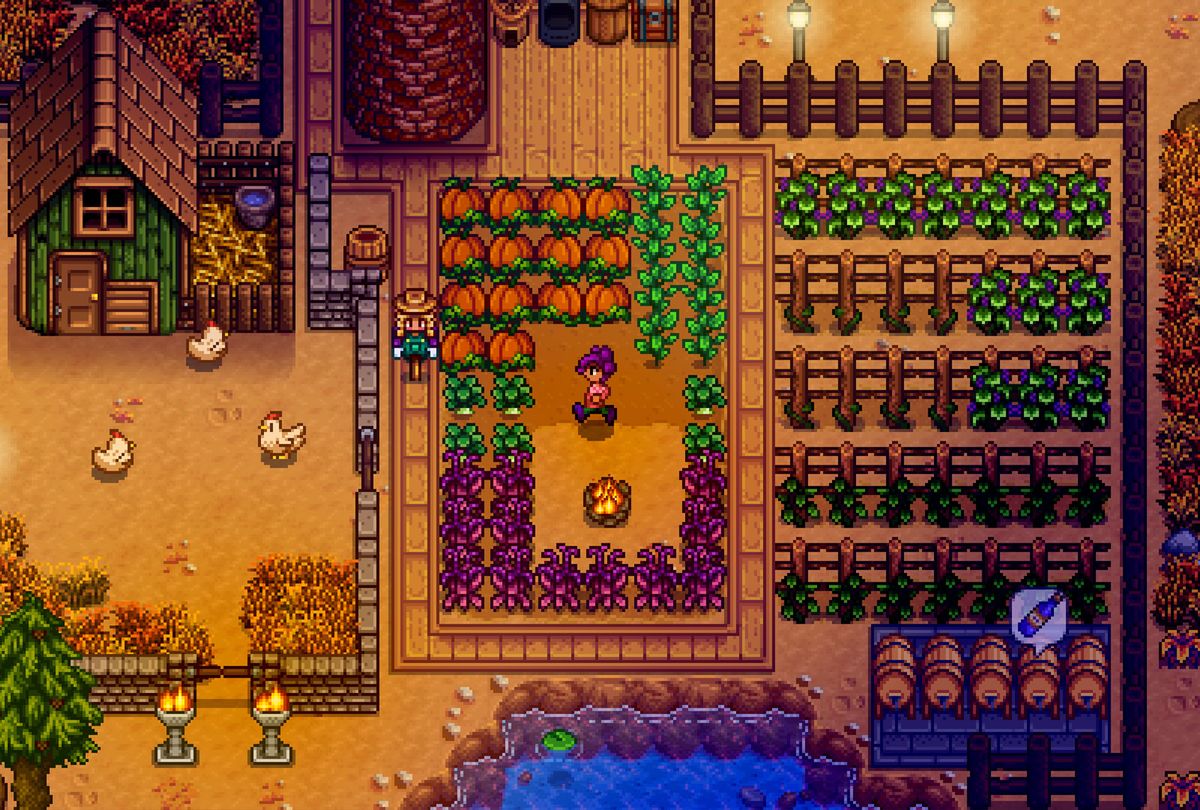 Stardew Valley farm in the the evening (ConcernedApe)
--

At least a few nights a week, I'll sign off from work and start what has basically become my second job: filling a pair of virtual refrigerators with jars of virtual jam. The flavors range from supermarket staples like blackberry, grape and strawberry to more fantastic varieties like starfruit and crystal fruit, an icy-blue plant that can be foraged from the snowy, pixelated forests of "Stardew Valley."

Originally released in 2016, the virtual role-playing game arms players "with hand-me-down tools and a few coins" as they inherit their grandfather's old farm plot in the titular town. There, my name is Maple. I have a dog named Moose, some chickens and cows, as well as a pair of goats who, no matter how much hay I feed them, are more often disgruntled than not.

The game is divided into four 28-day seasons, and it opens in springtime. Though time moves at an accelerated pace, my first year in Stardew Valley was particularly languid. I'd rush into town at 6 a.m. to buy seeds at Pierre's General Store only to realize it wasn't open until 9 a.m. JojaMart, the town's big-box store that's essentially a dystopian Costco, was also closed, so I'd spend a few hours fishing in the river that winds through town and attempt to chat up the residents as soon as they made their way into the square.

Eventually, Pierre's would open, and I'd buy seeds, initially choosing whatever was cheapest (a lot of parsnips!) before I trotted back to my farm.

The actual process of farming in the game is, depending on your persuasion, either meditative or monotonous. Players first have to clear their intended field of obstacles — boulders, patches of grass, sprawling oak trees — and then till the soil, square by square, before planting. From there, it's a matter of "water and wait," a form of quiet gameplay that largely underpins the wildly popular "Farming Simulator" franchise, which is now on its 20th release.

Much like "Farming Simulator," "Stardew Valley" found a new legion of fans as the pandemic dragged on and an unironic interest in urban homesteading swept the nation. I was swept up along with the rest of the country and rotated through the requisites: tending to a scallion nub in a glass of water, babying a sourdough starter and baking banana bread.

As the concept of work-life balance grew increasingly blurred during lockdown, I'd stay up late envisioning a career that was both more pastoral and more meaningful than my current existence, one where my day-to-day interactions with nature consisted of watering my wilting fire-escape herb garden and observing the labrador puppy that bounded across my apartment complex parking lot a few times a day.

I had a Pinterest page labeled "Fruit Bat Farms," a nod to my enduring fascination with the creatures, where I curated images of microfarms, a type of agricultural smallholding that I came to learn is stationed on five acres of land or less. Many existing microfarms center around specialty crops — like edible flowers, garlic, microgreens and organic berries — and have a secondary focus on value-added artisan goods like small-batch jams and pickles.

They're also typically located in or adjacent to urban areas, which was initially important to me. While this was a fantasy, I wanted it to be rooted in some semblance of reality.

Was I likely to abandon the particular comforts of living in a city? No, but as I continued filing away photos of manicured raised garden beds and twee baskets filled with pea shoots, reality quickly became less important than whimsy. Blueprints of chicken coops were replaced with pictures of floppy straw hats, which gave way to links to billowy cottagecore dresses.

I didn't dream about the back-breaking slog that is actual farmwork. I dreamed about picking strawberries while wearing the internet-famous Strawberry Dress (lusting after the $490 frock by designer Lirika Matoshi was a lockdown trend in itself) and somehow make a living doing it. I think that's why, when it came time to choose a virtual life, I ended up in Stardew Valley. Where "Farming Simulator" had an e-shed of shockingly realistic-looking John Deere tractors,"Stardew Valley" had the idealized domesticity I craved.

After waking, watering my plants and feeding my livestock — activities that barely make a dent in Maple's energy meter — the day is mine. I can do any number of things: forage on the nearby mountaintop, mine for precious metals in the caves on the edge of town or snoop around in the unlocked homes. Unless I'd taken on a special assignment, like signing up to grow and ship 100 pumpkins by month's end, I had no real end-game.

But when I became a level-four farmer, things suddenly started to shift.

Once you reach that point in the game, the capability to craft a preserves jar is unlocked. "Turns vegetables into pickles and fruit into jam," the description reads. "Why not?" I thought as I selected one. I had a random surplus of freshly-foraged blackberries and figured I could potentially woo one of the villagers in whom I was interested in dating (read as: most of them) with a jar or two.

I plopped one down in the virtual kitchen expecting it to be the size of a piece of fruit, which are already rendered to be comically large, but it's scaled more like a large wooden barrel than a jar. Players are instructed to place a piece of fruit — any fruit — inside and leave it alone until it's ready, much like the "water and wait" crops process. There's no mixing, no stirring, no additional ingredients. I know they're ready when a little white text bubble with a jam icon floats above the jars.

From there, players have a few options: They can sell the jam, they can give it to a fellow village resident or they can place it in their refrigerator for longer-term storage. I opted for the final choice, and as I hovered my mouse over the jar — prompting the simple text description "gooey" to appear — something clicked.

I was going to become Stardew Valley's resident jam artisan.

As a result of this decision, my days in the Valley developed more structure. Wake up, attend to the animals, water and pick a rotation of seasonal fruit, fill my growing collection of preservation barrels with the fruit and eventually store the jam. There was still a hefty amount of whimsy — sometimes fruit bats would leave me gifts like ripe cherries or juicy peaches in the nearby cave, making my "Fruit Bat Farm" at least a virtual reality — but, at some point, it was no longer really a farm. It was a one-woman virtual jam operation.

Throughout the process, my real-world pandemic fantasy shifted yet again — this time from strawberry dresses to days spent making strawberry jam. It wasn't just the end product that was appealing — it's what it stood for. As Suzanne Cope wrote in her 2014 book "Small Batch: Pickles, Cheese, Chocolate, Spirits, and the Return of Artisanal Foods," the Slow Food movement and associated artisanal foods have always had ties in the U.S. to both the counterculture and times of societal uncertainty.

"During tumultuous times, when change seemed hard to come by on systemic or political levels, food was seen as an arena where one could support a certain worldview three times a day," Cope wrote. "Thus, choices that supported a nonindustrialized, nonconformist food system were soon a telltale sign of what had been dubbed the 'counter-cuisine' movement of the 1960s and 1970s."

In its design, "Stardew Valley" not-so-subtly teases the tensions between corporate greed and community values by casting JojaMart as a villainous harbinger of commercial homogenization, which would undoubtedly wipe out family-owned businesses like Pierre's. While in real-life America mega-restaurant chains were receiving Paycheck Protection Program loans as local restaurants suffered, in Stardew Valley, players could vanquish JojaMart — and literally shift the destiny of the town — by crafting artisan food bundles.

Underpinning this all is, of course, a fantasy of self-sufficiency. I spent many days reading about and reporting on unemployment in the food industry and massive disruptions in the already-precarious food supply chains that criss-cross the country. As Dr. Leni Sorensen, a culinary historian and home provisioning skills instructor, told me last year, people want to feel like they can have what they need when they need it.

"Whether it's working on accumulating a pantry, that's just your basic pantry," she said. "And then you add to things that you made on your own — your own canned goods, home-preserving food. It's knowing that you'll never be without stuff."

This is especially true in times of economic recession. As Cope wrote in "Small Batch," seed sales surged in 2007 amid anxiety about the potential financial crisis, as did the number of food-based businesses. The same thing happened in 2020.

In "Stardew Valley," fans of the game have Reddit threads and Wiki-entries dedicated to breaking down the profit players will make when they finally sell their creations. Jam, for instance, is always double the base fruit price, plus 50 gold (the primary currency in the game). Though in reality, the market for small-batch goods can be mercurial. Once I started cashing in my jams at the end of each season, my in-game bank account swelled.

I expanded my barn, spent a little frivolously at the annual night market, purchased some ducks and upgraded a fellow villager's home — all from making jam. Along the way, JojaMart shuttered. I always have leisure time, and my refrigerators are never empty. If that's not a fantasy, then I don't know what is . . .