Actor Graham Greene on how fear & golf relate: "It's a game where you get to play against yourself" 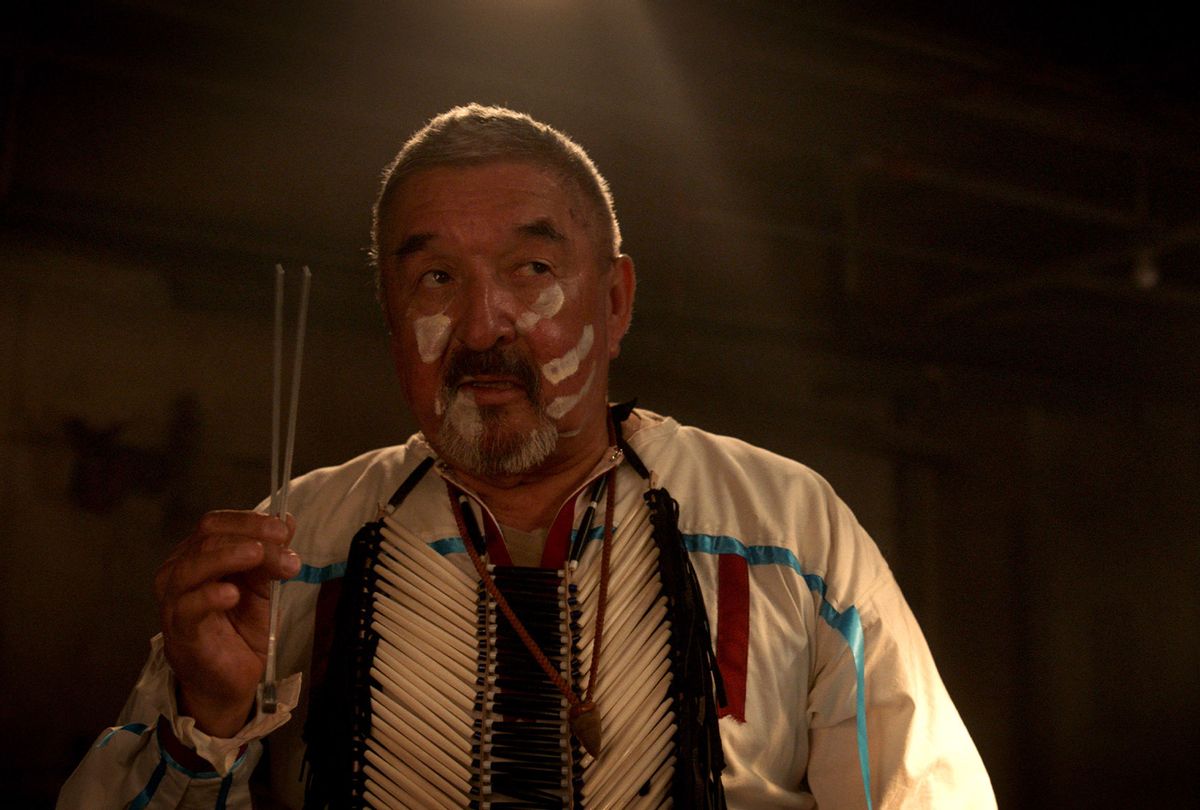 Graham Greene often plays a wise First Nations character; his tribal cop roles in "Thunderheart" and "Wind River" are classic examples of that trope. But he can also send up that image, as he did in "Maverick." He is one of only two Native American actors to be nominated for an Academy Award (for "Dances with Wolves"). His decades-long career includes playing a love interest in "Transamerica," and a cop in "Die Hard with a Vengeance," as well as a prisoner in "The Green Mile." He also has appeared in popular TV series including "Longmire" and "Goliath."

The valuable character actor's latest role in "A Dark Foe" has Greene playing a serial killer named The Cradle, who scalps and skins women. The Cradle is being hunted by FBI agent Tony Cruz (Oscar Cardenas, who cowrote the film) who is out for revenge ever since The Cradle killed his mother and kidnapped his sister decades ago.

Greene brings a gravitas to his role and steals every scene in this ambitious thriller, which is why his performances are always so welcome. The actor chatted with Salon about his career and "A Dark Foe."

It was interesting to see you play a serial killer in "A Dark Foe." Was the opportunity to play against type appealing to you?

Playing a psycho killer was a juicy role. I saw the script and thought, I gotta do this. My agent said, "I don't think you want to get into this whole bloodbath psycho thing." I said, "Are you kidding? It's a great role, I want to do it."

Did you prepare for the character?

I went out around about midnight . . . just kidding. I just read script and fed off the other actors. The fear The Cradle lived off — I don't think he fed off fear as much as he used it. It was something that helped him. In a genre film, there has to be laughter, a valve to turn to let pressure off. You can put things here and there, but you can't take it too far, or it's too much and it won't work.

I'm curious if you were consulted on the script given the discussion of spirit journeys and tribalism and the Native American themes and how accurate is it?

It was all there, and I said, "All this stuff is wrong, and it would never happen." But it's part of the character — [Tony's] agenda was protecting his family, and unfortunately, he has to take the vehicle of using Native American religion to do that. He needed it as an excuse for what he was doing. The film is about Tony, Oscar's character, and his psychosis of what he went through. He spent his life looking for The Cradle because of what he did to Tony's mother and sister.

The Cradle has a speech in the film about blaming White people for ruining things. I am curious about your thoughts on incorporating these issues into the film given your character's motivations for killing.

He used that as, not an excuse, but the ideals of irradiating the land, and poisoning the air and the water, as a motivation to get these victims rather than the excuse to save his daughter's life. The skinning of these women and doing other nasty things were a motivation. Whatever role I take, people are going to ask, "Is this a Native issue?" No, it's a horror genre. The issues are an excuse for him to do what he's doing. Ruining the earth is giving him power to commit these acts of violence.

There are scenes of torture, especially when he teaches Cruz to withstand pain. Do you think they perpetuate Native stereotypes?

Well, it's only a movie. What I do look for is something that I want to do. Someone can go dig a meaning behind a film and there is nothing there; there is no meaning behind it. These elements he used as a vehicle to drive himself forward to commit these heinous acts for an end reason is why he's doing all this stuff. It has nothing to do with Native culture, or what's going on in the planet. It's happening everywhere. It's just something he glommed onto as an excuse.

Was it fun to play the torture scenes?

Yeah, it's like pulling wings off flies! I'm just kidding! It's interesting thing to watch the psychology behind somebody's fear and feeding off that fear. It's like watching a mongoose and a cobra. The mongoose has the power to take that cobra, but the cobra is always up and watching the mongoose. Who is stronger and who will win in the end or not win in the end? Defeat is flighty, and victory is flighty too. It's like I always say about golf. It is the only sport where momentum is equally balanced by fate. Such is life.

Are you a good golfer?

What thoughts do you have about your career and the opportunities you are given as an actor?

I tend to move along in my career and take roles that are unique and different. I've played God twice. I've played judges, lawyers, doctors, police officers, and detectives. The diversity of roles is what I like to play. I don't like to be pigeonholed as one thing because you get stuck in one role. Jack Nicholson is hired to be Jack Nicholson. I don't want that, and not being able to experience the other workings of what's going on in a writer's head and taking a script and lifting a story off the page and telling it your way.

Are there roles you want to play that you haven't done yet?

Oh, I always get asked that question. The one that pays the most money. That's being honest.

I first saw you in films like "Running Brave," Powwow Highway," and "Clearcut." You became known as an actor with "Dances with Wolves." Did you find your options for roles limited? Did you feel your career options were limited?

No. I sat my agents down and told them I don't want to be dressed up in feathers and long hair and stand around and say nothing. I want to be diverse in roles and do other things. I did that once and it was fine. Let's move on. You don't drive the same car for 50 years or live in the same place — unless that's what you want. But it's boring to do one thing all the time: work in an assembly line for eight hours day, five days a week, 52 weeks of the year, with some time off for 40 years doing the same thing over and over. It's mind-numbing.

I was a welder because once you put your helmet down and struck the arc, no one would look at you because the light was too intense. They wouldn't bother you. You could hide behind it. No one bothered you if you did high steel work. I was an iron worker and welded fabrication in a shop. I welded hopper cars. I didn't last very long in that. It was the middle of winter and 10 below inside the plant. They didn't have heat. You had to crawl inside the hopper and weld in there. And there was a fear of getting laid off when the contract runs out. If I'm going to be looking for work, I'd rather be acting.

So, you went to the very secure business of acting!

Acting is far more fun and educational than people give it credit for. You do things that people sit back on the couch with a beer and a bag of chips and say, "Geez, look at that! I can do that!" They do it in their head, but they can't do it. We [actors] are an extension of people's lives. All the things I do in films, I'd never do in real life. And if it was dangerous, I'd turn to the director and say, "Let that guy over there, dressed just like me, let him do it!"

What observations do you have about the progress that is being made regarding Indigenous actors in cinema and television now?

It's much higher right now. When I started, it was low. I am by no means the first to be in it. Harry Smith, you probably know him as Tonto in "Lone Ranger" series, he lived in Los Angeles. Then Dan George, August Schellenberg, who worked in classical theater, Gary Farmer, and others in the old gray hair club.

We plowed the road for these kids. They come up and do their own writing and say, "Why can't we do it?" They formed their own theater and film companies and are doing TV. They are getting criticized for hiring non-Native people for coming on board to work with them. "They shouldn't be doing this." But they don't know how! OK, let's go way up North and I'm going to leave you in bush with just a knife and a stick and see you in the month and see how long you last — if you can survive in the business up there while these kids survive in the business down here.

There are pitfalls everywhere. You have to learn how to look at things from two different perspectives and use the energy and wisdom accumulated by each party and share that energy and know how to transfer it and ask a question without looking stupid. You share the knowledge. That way movement ahead can take place. How do we sustain ourselves? Just be steadfast. Don't let anything bother you. If you are afraid of it, ask questions. It might impart some knowledge to you. Perhaps you can help it or them. It's all giving and understanding. And listening. That's rule number one for a good actor. Listen to what the other person is doing. Pay attention.

Yes. Social media is the death of critical thinking.

Technology has just run me over. I have hard time with my iPad. I just get my mail. I finally figured out how use Zoom on my iPad. There's one thing wrong with all this technology — you can't hide anymore.

You talked about fears. "A Dark Foe" deals with Cruz's nyctophobia. What are your fears?

What scares me personally? I don't know. If you don't have fear of anything that's the time to stay home. When I was an iron worker, they said, "When you aren't afraid to go up 10 floors on the steel, go home." Because you'll make a mistake. You have to be on your guard and wary. You also have to be able to find a balance between the fear and acceptance at the same time. I accept a lot of things, but I also fear a lot of things. I fear a lot of things I accept. There's a little bit fear in everything. Everyone should have a little fear, even walking across the street.

"A Dark Foe" is available on demand on July 30.