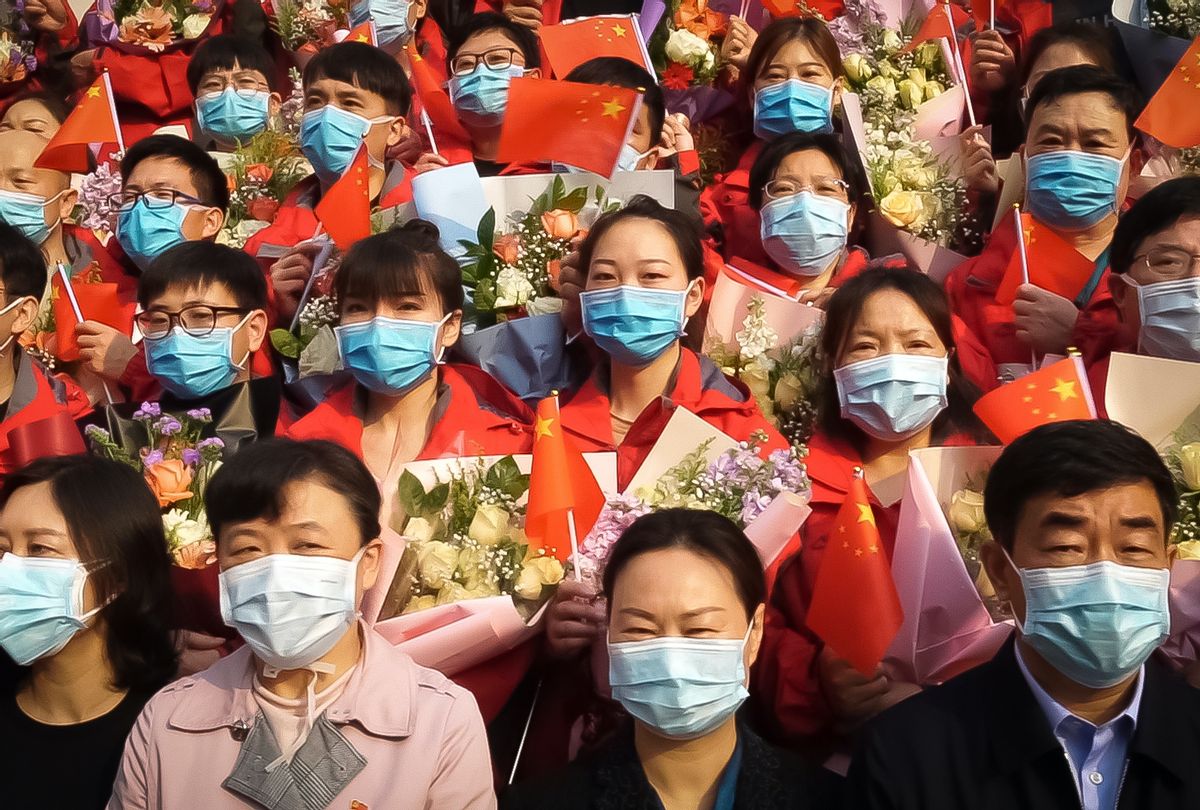 With "In the Same Breath," director Nanfu Wang ("One Child Nation") takes a critical look at COVID in both Wuhan and America. Her documentary chronicles — and questions — the responses and reactions to the pandemic as misinformation about the virus spreads fast.

In Wuhan, eight people were punished for spreading a rumor about a pneumonia that, had the messages been heeded, could have saved countless lives. However, as Wang's film shows, China was very concerned about having a negative image and created propaganda to save face. Reporting around 3,000 deaths from the virus, the reality was likely more than 10 times that number. And the film's numerous scenes of patients being denied care in hospitals is harrowing.

In the U.S., things were not much better as precautions were ignored, health care workers were fired for expressing valid concerns, and citizens protested against Trump's feeble efforts to control and contain the spread of the virus and claims that COVID is a hoax.

"In the Same Breath" is not an easy film to watch. While it is infuriating to see people disregarding the facts, it is encouraging to see people like Peien Liu, in China, speak truth to power by resisting "the official story."

Wang chatted with Salon about her documentary.

What prompted you to tackle this subject during the very pandemic you're documenting?

At the very beginning, I didn't think I was going to make a film. It was really in the midst of the craziness and fear — trying to get my son out of China and figure out if my family would be safe as we tried to understand what the situation was. There was confusion, and we did not know who or what to trust. During those moments, we were figuring out the severity of the virus, and the government's statements, and how much was true. There was a huge discrepancy between what the government was saying about the virus — that it was contained — versus what was on social media: the virus was out of control; people couldn't get into hospitals, and were dying. There was tremendous censorship of those stories. They would get onto social media and immediately be deleted. I also personally witnessed in my hometown where I have relatives who work in hospital would tell us how many cases they had. Whereas management and the government were telling them not to report any cases. It was being shocked by all that information and the reality that I learned. I tried to reach out to news organizations to report those stories [and they didn't respond], so I was compelled to make a film. At the time, I had no idea what our reality would become.

You were back in America when you hired folks to film in hospitals in Wuhan. Can you describe how you "directed" from afar and worked with reporters and camera operators who were willing to risk their lives to secure the incredible footage in your film?

It was a process. Everything was shot remotely and directed remotely. We had a dozen camera people in China and a dozen in the U.S. I did the interviews via video chat. The verité shoots were a process. I knew some of the camera people and for some it was our first time working together. They would send me footage so I could review it, and that allowed me to gauge their style and give them feedback. The very first shoots happened inside the hospital in Wuhan. The camera people would implement self-censorship and turn off the camera when something was negative or not film certain things. So, the feedback I gave them was to film nonstop. Then it was sifting through the footage. The moment when they were not paying attention was the best moment! Outside of the hospital, once we established a relationship, it was walking them through the scenes that I wanted to get or anticipate what was going to happen. Sometimes it was pulling visual references — how I wanted the scene to be shot, and seeing what they understood, or didn't. One scene took three times to get right because they shot it too fast, or too far away. We need to be close and slow. The most fascinating thing was when we sent different camera people to film the same event — the lifting of the quarantine of Wuhan. One person saw it with pride — Chinese government's achievement — with all the lights lit up in the city. Another one saw it as signifying the atrocity of the blood and death that had happened because of the government's cover-up.

There are some heartbreaking case studies, from Runzhen Chen, who ran a clinic with her husband who died, to Wenbing Tao, who was infected along with his son. But also, several traumatized health care workers in the U.S. What was your criteria for the stories you included in the film, and how did you get folks to talk candidly, which might even get them in trouble?

A lot of these people had just lost their family members. Before we met them in person, I called them, and we talked for hours before I convinced them to be on camera. The father, for example, we met him inside the hospital during quarantine and followed him. The final interview was after months of relationship-building. Most folks wanted to talk because they were in quarantine and had lost family members and had not seen other people. They had a lot trauma and needed their stories, and what they suffered, to be heard. It was extremely emotional. It was not difficult for them to tell the story on camera.

There are many scenes in China of hospitals denying beds to folks who are dying from the coronavirus to scenes in the U.S. of healthcare workers being under-equipped. What observations do you have about how the situations escalated so quickly and why the responses in both countries were so lame?

I think, during those moments, governments in China and the U.S., and many other countries, prioritized preserving their image over its people. Every government tried to say, "There is no threat. The risk is low. We're handling it really well. Everything is contained," while they either knew or did not know the actual severity of the situation. But their priority is to go in front of a camera and tell everybody something that is not true. That's why everything went out of control. They chose to mislead people when they knew what they were saying was not the reality.

China created propaganda, sending messages of "confidence and hope," to avoid negative responses to their handling of the crisis. They even lied about the number of deaths. In America, folks protested against Trump's feeble efforts to control and contain the spread of the virus, claiming the government was disseminating lies. How can your film, which exposes these facts, work to change minds, rather than just preach to the choir?

Would a film change people's minds or have an impact enough to make people see something they don't see or agree with? I don't know the answer. If I had to guess, I think it would change some people's minds. "Oh, wow, I didn't know this," or "I didn't think of it this way," or, "I thought China did great, and only 3,000 people died of COVID, and now I'm seeing that this is a different narrative." Maybe people will see the protests for reopening here in the U.S., and think those people were not getting it, but by watching the film, they realize the difference between those who created the narrative and those who consume that narrative. It came from the original messages that were intentionally misleading. The goal of the film is for people to see through the news and behind the news, and how we got to this point and what kind of actions and behaviors from our leaders led us to where we are today.

The film is very much about exposing the truth and speaking truth to power. What are the risks of making a documentary that is critical of both China and the U.S., especially given the censorship concerns in China?

The risks exist in almost every stage of filmmaking. During the production, everyone involved took great risk, and were willing to do this, and I appreciate that. Some of the camera people and the field producers followed activists who were arrested and some of them were questioned by police. After film is released, the risks still follow everyone who was involved. As the filmmaker, I am usually targeted. Some of the stories themselves may not be as critical as the film as a whole. My biggest concern is always my family, and every time I make a film about China that is critical, my family gets into trouble. And that is not an exception with this film. My family has been contacted several times since the film premiered at Sundance. They ask me not to make documentaries in China or talk negatively about China in interviews. That is the harassment and intimidation that my family faces.

There was a recent article in the New York Times about the sudden popularity of Chinese women filmmakers. You and Chloé Zhao, were being shunned for your work because of the films you made, "One Child Nation," and "Nomadland," respectively. What is your response to this trend of female filmmakers in China?

I think there has been a growth of filmmakers and filmmaking, especially documentary filmmaking, which I follow. My friends are making great films. Despite that, though, it is still true that very few of their films can be seen if it is "considered" to be politically sensitive — and that's a very broad term. What is politically sensitive, whether it is LGBTQ topics, or religion and issues about religion, or human rights, or social issues. I feel a lot of admiration and sadness that the reality for these filmmakers whose work can't be seen inside China or won't have the wide distribution that it deserves. All my films cannot officially be seen in China. People have to see them underground. It's much harder for the filmmakers who work and live in China because that's their environment, and their audience, and yet their films can't be seen there.

Do you think there is COVID fatigue that might prevent people from seeing "In the Same Breath"?

No. I've seen several films about the pandemic, and each film takes a different perspective. It's part of our history, and it's still unfolding. We are writing and documenting the history we experience, so it's natural that there are different interpretations. I think it deserves as many ways of people documenting, writing, and taking photos, about it. I'm glad it's being done and look forward to seeing more. I am sure there will be more.