Trump and his allies are still inciting domestic terrorism 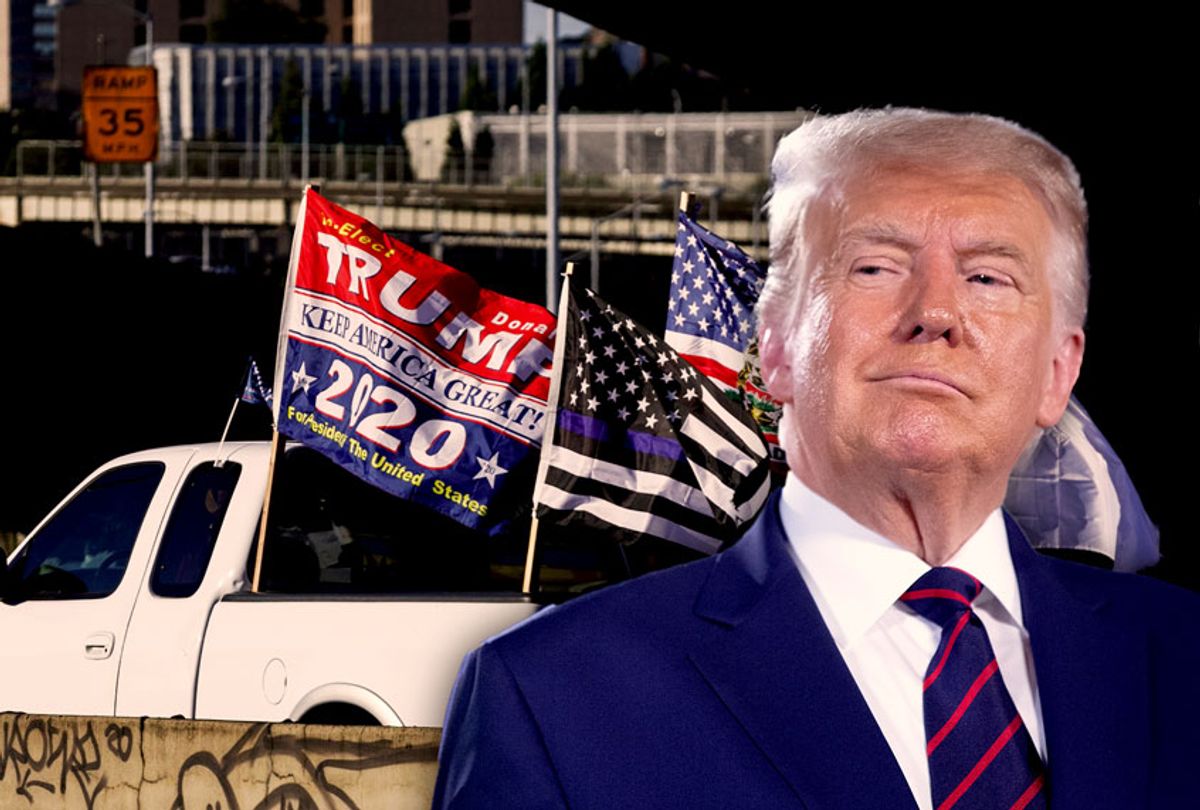 Earlier this month, the Department of Homeland Security (DHS) circulated a memo warning that Donald Trump and his allies were stoking the threat of domestic terrorism by hyping the Big Lie. Trump was holding rallies earlier in the summer to keep his followers riled up with false claims that he is the "real" winner of the 2020 election and President Joe Biden only won through "fraud." He also spent the summer hyping a fake "audit" of the votes in Arizona. Meanwhile, MyPillow CEO Mike Lindell, who has found a second career spending all of his money on being a fascist propagandist, was pushing the idea that he has his hands on some shocking evidence that would lead to Trump being "reinstated" as president on August 13. Both claims have gone up in smoke, but they nonetheless served their main purpose: feeding anger and frustration to the hardcore Trump base. That rage then has to go somewhere, which is why DHS was concerned.

"Some conspiracy theories associated with reinstating former President Trump have included calls for violence if desired outcomes are not realized," the memo noted. Indeed, it's hard to imagine that Trump and his allies are envisioning anything less. After all, part of Trump's schtick these past few months has been to rewrite the failed insurrection he incited on January 6 as a noble act of patriotism and to paint the people who were arrested or even killed for their part as martyrs for the Trumpist cause. There's no reason to do that other than wanting to see more of the same.

On Thursday, 49-year-old Floyd Ray Roseberry of Grover, North Carolina was arrested in Washington D.C. after making threats of a bombing that resulted in a five-hour standoff with police. As the Washington Post reports, during the standoff, "Roseberry delivered a tirade over a Facebook live video in which he assailed Biden and other Democrats, called for a revolt against the federal government and claimed there were other 'patriots' waiting in vehicles elsewhere in D.C."

"The revolution is on, it's here, it's today," he declared.

There's ample proof, of course, that Roseberry is a Trump enthusiast whose social media feed featured posts of him participating in "stop the steal" nonsense. He also posted videos about the Lindell-and-Trump-driven conspiracy theory that Trump was going to be "reinstated." But one hardly needs all this evidence because anyone arguing in good faith already knows what's going on here. Just as DHS warned, Trump and his allies have been encouraging violence all summer by hyping the Big Lie. Of course one of their followers heeded the call.

As Chauncey DeVega has explained at Salon, this is a strategy known as "stochastic terrorism." Propagandists stir up outrage and drop heavy hints with the hopes that followers will read between the lines and choose violence. Trump is a natural at this sort of thing, as expressing his wishes through implication is how he does business. "He doesn't give you questions. He doesn't give you orders," Trump's former lawyer, Michael Cohen explained in his 2019 House testimony. "He speaks in code." Trump communicates, in other words, like a mob boss and has admitted that, "I did not make a statement that, 'You have to do this or I'm not going to give you A.' I wouldn't do that."

To be clear, Trump's code isn't subtle. Holding out the dead Capitol insurrectionist Ashli Babbitt as a martyr and stating that the goals of the insurrectionists were good is about skirting, but not crossing, the line of openly calling for more terroristic violence to avoid criminal exposure for incitement. But keep up that patter of "woe to the noble insurrectionists" and "their cause is just" long enough and more people will pick up what is being put down.

The ineptness of Roseberry's attack isn't surprising either.

By its nature, stochastic terrorism is scattershot and inefficient. The ringleaders can't single out targets or describe detailed actions they'd like followers to take, as that opens them up to prosecution. So instead they drop hints and hope those self-directed people who are simply guessing at what to do get lucky and pull it off. It's a process that inherently causes a lot of bumbling behavior. Even January 6 shows this. The rioters were given a concrete target, a concrete goal, and a concrete point in time — the Capitol Building, stop the electoral count, January 6 — and even then, once they overwhelmed police forces and took the Capitol, most of them stood around with no idea what to do next.

But the sloppy nature of all this doesn't change the fact that it's incredibly effective at the major goal of radicalizing the Republican base. Polling shows that at least half of Republicans have embraced conspiracy theories that allow them to be supportive of the insurrection without coming right out and saying so. And nearly half come right out and agree with poll questions about staging violent revolution against the U.S. government. Indeed, it's arguable that these bush-league terroristic efforts only aid the cause. It's a lot easier for American conservatives to sympathize with terrorists if they aren't having to face the images of violence and death that ensue from a competent terrorist attack. That's why Ashli Babbitt is being held out as a martyr and not, say, Patrick Crusius, the accused shooter in the 2019 El Paso terrorist attack that killed 23 people.

Unsurprising, then, that Rep. Mo Brooks, who is already in legal hot water for his part in inciting the January 6 insurrection, immediately moved to turn Roseberry into the latest martyr for the Big Lie cause. The Alabama Republican released a statement that, after some throat-clearing about how violence is bad, got to the real message. "I understand citizenry anger directed at dictatorial Socialism and its threat to liberty, freedom and the very fabric of American society," the Republican wrote.

This kind of "violence is bad, but..." rhetoric is about recasting the perpetrators as victims, people whose violence was not their fault, because they were supposedly pushed too far — in this case, by American people using their legal right to vote to pick Biden over Trump.

Right now, the main thing constraining Trumpist violence is a lack of concrete targets and goals. As I wrote yesterday, this explains why so many of the people Trump has riled up are turning their violent anger towards the COVID-19 culture war, which provides both people to lash out at and specific demands: an end to all mitigation measures so the pandemic can spread unchecked. (They really are a death cult!) Unfortunately, as elections draw nearer, plausible targets to take out Big Lie anger on will come into view, namely any entity or person tasked with conducting elections, as well as voters who are deemed "fraudulent," usually because of race or ethnicity. So it's important not to take the current flailing status of the Big Lie movement as a sign that they're not dangerous. As long as Trump and his allies keep the incitement up, the threat is all too real.