Elijah Wood on playing the "best friend" of Ted Bundy: "He continues to endure as a fascination" 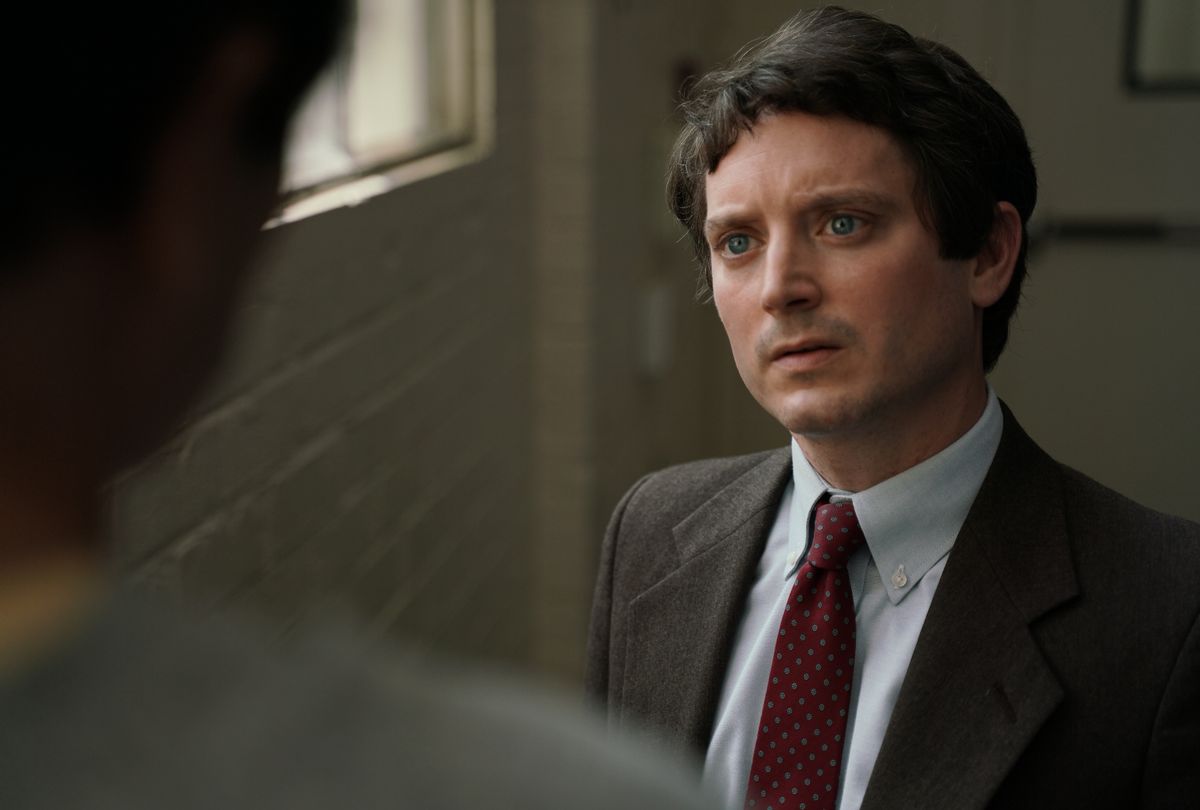 Elijah Wood gives a serious, arresting performance in his latest film, "No Man of God," which is now in theaters and on demand.

In this intense drama that Wood also produced, the actor plays noted FBI profiler Bill Hagmaier, who develops a "friendship" with Ted Bundy (Luke Kirby), during the latter's imprisonment. Director Amber Sealey's film, which is "inspired by FBI transcripts, recordings, and recollections of Bill Hagmaier," offers several fascinating exchanges between these two men as they discuss topics such as: Could you commit murder?

Wood's performance is very much one that involves Hagmaier listening and mostly not reacting to what Bundy says during their one-on-one interviews, and these lengthy scenes are almost seductive. One late in the film where Bundy recounts a story to Hagmaier while grasping his arm is particularly effective and affecting.

But the actor calibrates his expressions that viewers know exactly what Hagmaier is feeling — from his excitement to know more to his disgust at what is being said. As "No Man of God" charts their meetings between 1984-1989, there is pressure for Hagmaier to get Bundy to confess to the extent of his crimes after the Florida state Governor gives him seven days until execution.

Wood spoke with Salon during the Tribeca Film Festival about playing Hagmaier, his thoughts on Ted Bundy and making "No Man of God."

Did you speak with the real Bill Hagmaier about playing him? If so, what insights did he give you about himself?

Well, before I spoke to Bill, there was a fair amount of background information at our disposal, such as the interviews he had [given] about his relationship with Ted. We had audio to go through, as well as the script itself. When I had the opportunity to speak with Bill — and had we not shot during COVID, I would have spent more time with him — but speaking to him on the phone was hugely helpful. It was really specific questions that I had. There was so much I understood about what transpired. For me, it was more about subtle things like, Were you anxious before your first meeting? What kind of research did you do prior to that first meeting to prepare you for it? Did you speak to a number of individuals prior to meeting Ted to gauge how to talk to him?

What did he reveal about Ted Bundy?

As we show in the film, Ted really distrusted law enforcement and made himself not available. He would just toy with people and really not open up at all. I was curious about those things: What was [Bill's] preparation, and what were you feeling? He was really forthcoming and so helpful. He availed himself to the entire production — to Luke [Kirby] to provide further information about Ted, and to Amber [Sealey] about tiny little details, like what color tie he was wearing at the second meeting. He was really happy to provide this, which was so lovely and generous.

We actually shot somewhat chronologically. That was helpful in terms of where Bill was in that first meeting, which is different than the second. I wanted to be bolstered with a sense of confidence that I was doing the right things playing an FBI agent. But it is also about his humanity — and what sets him apart from his peers, specifically the ones that deal with Ted —cand you get this when you talk to him — that there is a quiet calm, and kindness, and openness that makes him easy to talk to. Then you realize that's why Ted so frequently and easily gave information away and was comfortable to talk. There is something incredibly disarming about Bill — getting that essence and applying that. Everything you thought about and prepped for takes on a life of its own.

What can you say about the relationship between Hagmaier and Bundy, and developing the scenes with Luke?

At the end of Ted's life, he considered Bill to be his best friend and willed his last earthly possessions, what little he had left, to Bill. Which indicates what Ted felt about Bill — and it wasn't what Bill felt about Ted. There was a humanity there. Bill would say that they did connect as human to human, and in some ways, they had to for that relationship to be fruitful in regard to the information Bill needed for the families of victims and for profiling. There had to be some understanding. Two people can't be sitting in a room without there being some common ground. That is explored throughout the film. What's interesting about those conversations are the layers of what's being said, and a series of layers of what's not being said. And in terms of what both are wanting out of any given moment. Ted infrequently referred to himself in the first person when recounting these stories of murder. He would often talk in the third person, as if he didn't do it. But occasionally, he would slip up out of comfortability. Both of them are kind of playing a game to a degree, and there are real things being expressed as well. As actors, we could dive into it and find nuance, and make discoveries and play in that space. Having the parameters of four walls, a table, and two chairs was great, and freeing, actually.

Are you interested in true crime? And why do you think we as a nation, culture, society, have a fascination with serial killers?

I've always been fascinated by true crime and serial killers, too. It's multilayered, in one respect, it's about the psychology, because it's so alien to the way, hopefully, that all of us think. I don't think any of us have murderous impulses, so it's fascinating to understand psychologically, what would make someone want to do those things? I also think as it pertains to Ted specifically, and others, that there is play to the media and they perpetuate a mythologizing of these individuals. It's certainly the case with Manson, and with Ted as well. He was an active participant in that. And as it pertains to Ted, he is so different, and remains a massive curiosity because he managed to live a pretty successful double life. Most serial killers or people of their ilk are not successful members of society. They were the shut-ins, or the meek neighbor that no one ever really saw. They are not typically attractive, they are often insecure or meek, I suppose, not always, but that tends to be a profile. The thing about Ted is that he wasn't that. He was intelligent, though maybe not to the degree that he claimed he was. He engaged in local politics and studied law. He worked at a crisis hotline center and actually saved people's lives. He was very attractive and charismatic. He had all of these qualities that on the surface, you would never imagine that that person was capable of what he was capable of. I think that's why he continues to endure as a fascination. It doesn't make sense — more than any other serial killer I can think of.

Do you think — as Ted even suggests in the film — that you could have switched places, and played Bundy? I do enjoy your performances as mischievous characters.

[Laughs] I don't know, man. I don't think I'm the right person. What Luke went through was not altogether pleasant. It's not pleasant to spend time in that headspace with that ugliness. [Laughs]. It played out the way it was supposed, which is not to say that I don't want to play dark characters. I just don't know that I was the one to play that particular person for a variety of reasons. What I love about that question, which is so central to the interior thesis of the movie, is, Could you kill? And moreover, if we switched places, could I do what you do? The reality is Ted probably could have been a successful member of the bureau. It was firsthand knowledge that provided him the ability to profile psychologically. He was intelligent enough; he probably could have done it if he was living a straight and narrow life.

You produced "No Man of God." What can you say about the decisions you make regarding your work and the projects you back?

The projects we engage in, we have a heart response to something and it's different for every project. "Mandy," for instance, was seeking Panos [Cosmatos, the director] out after seeing "Beyond the Black Rainbow." We wanted to make whatever he wanted to make next. With this, it was a piece of material that presented a story about Ted Bundy that we'd never heard before. I'd never heard of Bill Hagmaier. There's a reason for that. He didn't write a book and profit off the back of Ted Bundy. The story was so fascinating; it provided an opportunity to engage in a story that isn't about glorifying Ted Bundy. It's about the internal dialogue between these two people — the effect that that man had on Bill and the journey he goes on. It was undeniable. And knowing that it was based on transcripts and recollections was so incredibly fascinating. It wasn't the loud courtroom drama, or a man stalking his victims.

Can I ask you a question Bundy asks Hagmaier in the film? What brings out your aggression?

For me, I don't really get aggressive, but what angers me is injustice, when people are treated poorly or not treated fairly. People who lack respect and care for their fellow man. I don't harbor a lot of anger. Not a lot gets me angry, to be honest. I let a lot of things roll of my back. I don't hold on to grudges.

"No Man of God" opens Friday, Aug. 27 in theaters and on demand.