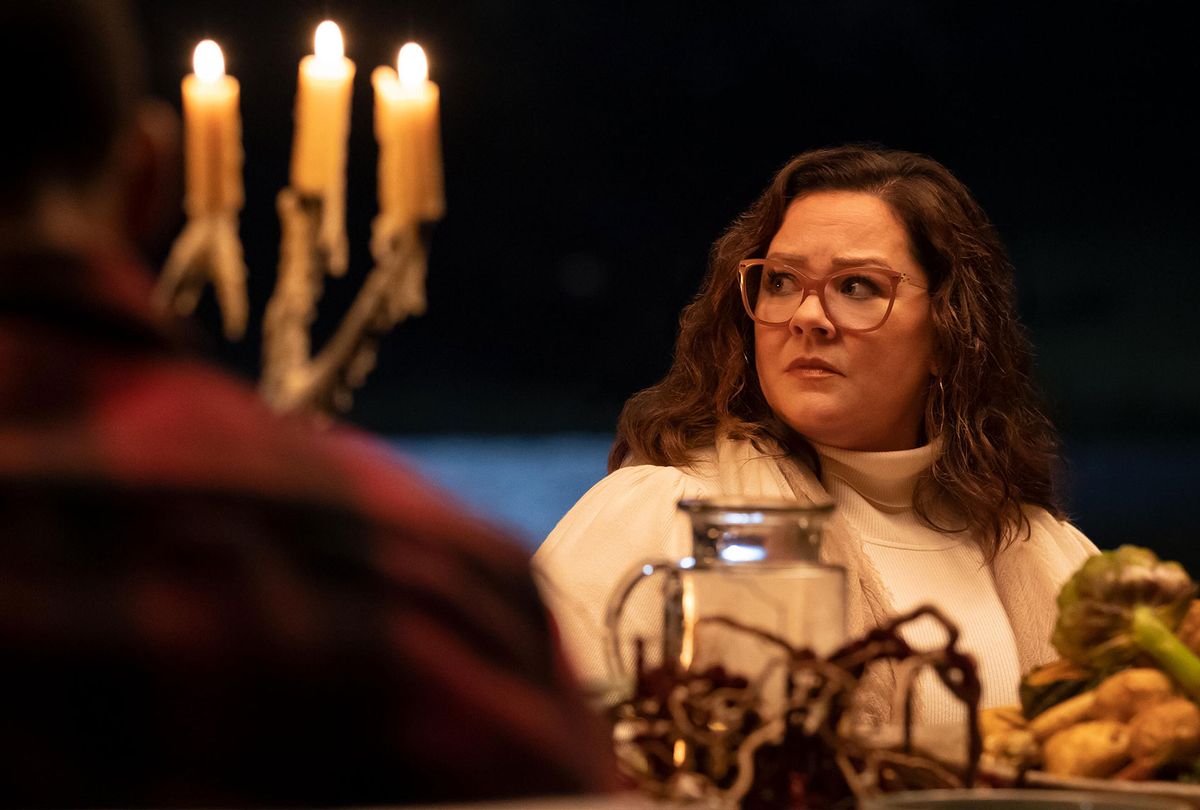 Netflix's "Clickbait" and Hulu's "Nine Perfect Strangers" don't seem to share a lot on the surface — the former is a twisty thriller about a local family man's apparent death-by-viral-video; the latter is a psychedelic mystery set at a creepy wellness resort. But they do have one thing in common: the portrayal of hapless, pathetic single women as the victims of predatory online catfishing.

Fictionalized catfishing storylines can make for such compelling storytelling that onscreen portrayals of this phenomenon are almost the "clickbait" of streaming these days. Real-life catfishing on dating sites is the subject of MTV's beloved reality show, "Catfish," in which its hosts travel across the country helping everyday, unsuspecting Americans decipher whether their online suitors are who they say they are. Part of the timeless allure of onscreen depictions of catfishing is the opportunity to present what we see in "Clickbait" and "Nine Perfect Strangers" — the pitiful spectacle of sad, often crazy, lonely single women being deceived in their desperation for companionship.

On Hulu's adaptation of Liane Moriarty's "Nine Perfect Strangers," Melissa McCarthy plays Frances Welty, a bestselling romance novelist who journeys to the Tranquillum resort to heal her broken heart. Frances was recently duped by a man she met online and fell in love with, who ghosted her shortly after accepting thousands of dollars from her for his fake son's equally fake, life-saving surgery.

As the show progresses, and with the help of psychedelic drugs, Frances gradually seems to heal, become more confident and move past the guy who hurt her. But her progress doesn't exactly override how we're first introduced to her — as a woman whose singleness and devotion to romantic ideals made her so unhappy and desperate as to be swindled by the first internet stranger to pay attention to her. Because Frances is portrayed by the irresistibly charming McCarthy, she's ultimately likable, spirited and sympathetic, but her character still feels like a cautionary tale of the supposed, inevitable tragedy and clownery that come with being an aging single woman.

On Netflix's "Clickbait," catfishing takes on a far more signifcant and fatal role. At the beginning of "Clickbait," we're initially sold on the idea of Nick, played by Adrien Grenier (best known for "Entourage" or aka the most hated boyfriend in America from "Devil Wears Prada"), as the perfect all-around family man. That's until a rash of dating profiles under his name and image are discovered across several apps and platforms, and his wife and family are left to parse through the pieces of his double life after he's killed.

But as the show winds down, the truth eventually comes to light that one of Nick's dour and lonely female co-workers had stolen his photos and other files from his computer to create the dating apps, and catfish dozens upon dozens of women while posing as Nick. The somehow remarkably technologically adept older woman, Dawn (Becca Lish), even managed to pull off deep-fakes, altering her voice to sound like a man to some of the women she talked to.

The women Dawn catfished are meant to be peripheral on this show, which is adamantly focused on uncovering the identity of Nick's killer. But it's clear being catfished has carried tremendous impact on their lives. In one of the more shocking revelations, a woman took her own life as a result of encouragement from Dawn posing as Nick, ultimately setting off the chain of events that leads to Nick's death.

In addition to this victim, Emma Beesly (Jessie Collins) is the most notable face of the show's many catfished women, because of the extent of her obsession with "Nick." After the actual Nick's death, Beesly travels up from Los Angeles to the Bay Area where Nick's family resides, telling her airline that she and Nick had been engaged prior to her death. We later learn her intimate "flashbacks" with Nick are delusions stemming from sexting sessions with Dawn. However physically and emotionally real her relationship with "Nick" may have been to her, she'd never even met him, and all of it was actually in her head. Surprise, surprise — she's yet another woman so bitter with her single status that she becomes crazy and delusional.

You'd think based on stories like these that victims of catfishing are exclusively desperate, lonely women. Yet, in real life, men are more likely to be catfished than women. In 2018, 43% of surveyed men said they'd been catfished, compared to just 28% of women. After all, it's Nev Shulman's own experience getting fooled that inspired the movie and then subsequent TV series (and now a podcast!) "Catfish." He wasn't looking for romance, and he was all told, a pretty plugged-in young man when he was taken in. And then there's the Notre Dame linebacker Manti Te'o who claims he was catfished, although there are still lingering doubts if he helped to perpetuate the hoax of a fake girlfriend who died of leukemia. Also, just ask any man on any dating app ever.

On the flip side, the ones who are doing the catfishing are not so easily pigeonholed as those needing more love in their lives. Despite how the catfishing culprit of "Clickbait" is revealed to be an old woman who's so bored and dissatisfied with her childless, grandchildless life as to steal a man's identity, one in three men report perpetrating catfishing compared with just one in four of women.

Neither "Clickbait" nor "Nine Perfect Strangers" attempt to present themselves as accurate, true-to-life depictions of catfishing. But wittingly or not, both capitalize on the trope of single women as desperately lonely and pathetic, thus more susceptible to delusion and predation – when we have ample evidence that catfishing victims are not always single, lovelorn women.

Frances in "Nine Perfect Strangers" is a wealthy and commercially successful novelist, yet we're led to believe that because she's an unmarried woman, her life is dissatisfying. In "Clickbait," our glimpses into Emma's life aren't particularly exciting or joyful. But unlike what we see onscreen, most single, adult women in the real world don't regard online boyfriends as the cure-all solution to broader problems in their lives.

The depiction of Dawn as necessarily unhappy, nasty and perverted because she doesn't have kids, and therefore has nothing else going on in her life, is even more problematic. Is this how "Clickbait" expects us to perceive child-free women when they grow older — as psychopathic, perhaps even dangerous?

Neither "Clickbait" nor "Nine Perfect Strangers" are tagged as comedies. Yet, there's certainly some level of comedic subtext in the treatment of their catfishing victims. On these shows, catfished women are pitiful, gullible, and decisively single — and for these reasons, they're the butt of the joke.