Was the cheeseburger actually invented in Louisville, Kentucky?

I'd heard (and often repeated) the tale that the cheeseburger was created in my adopted hometown. But was it true? 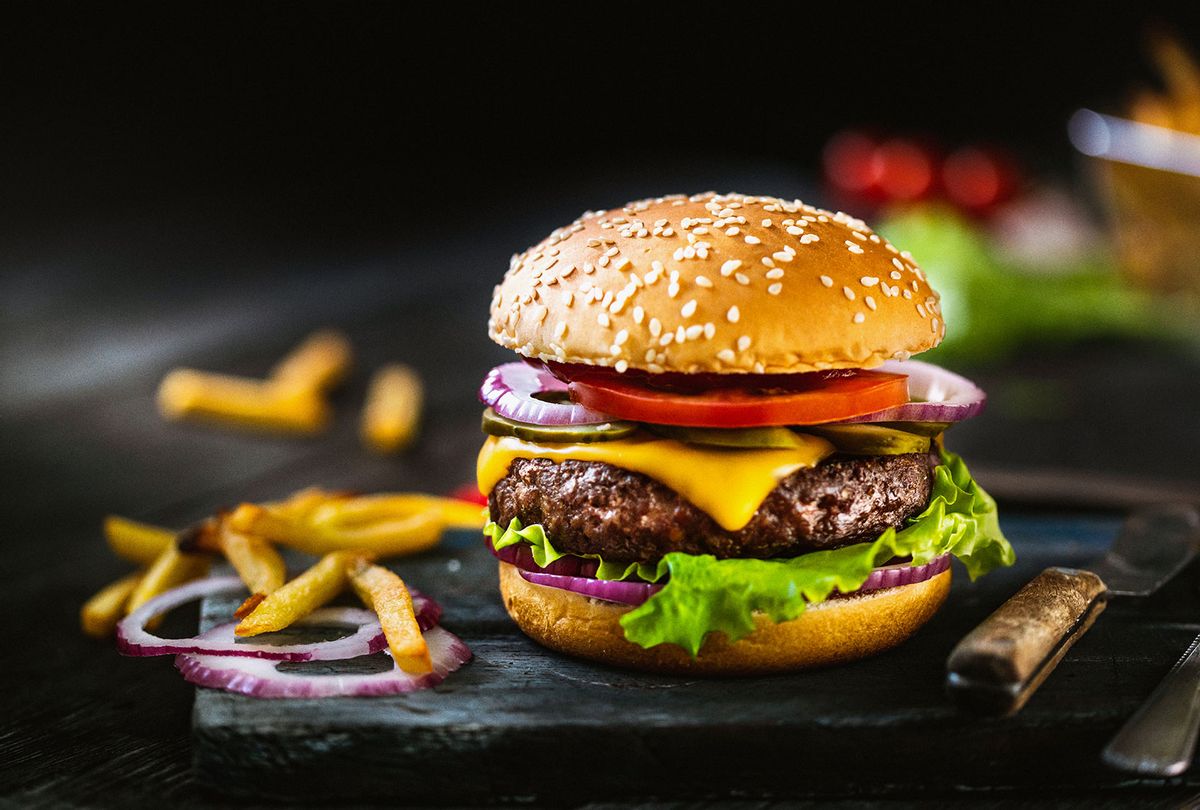 To this day, the origins of the hamburger are contentiously debated.

Some say that it's the invention of German immigrants who, once they reached American soil, ate frikadelle, pan-fried meatballs made of minced pork and beef, on a small sliced roll. Those meatballs were the undeniable precursor for the Hamburg steak, a ground beef patty originally flecked with bone marrow and kidneys, which sold for 11 cents at Delmonico's Restaurant starting in 1837.

Athens, Texas, has long laid claim to the burger's invention (the town's water tower simply reads: "Hamburgers"), while in a slightly passive-aggressive move, Tulsa, Oklahoma, proclaimed itself "The Real Birthplace of the Hamburger" because it's believed that the first burger on a yeast bun may have been served there.

In 1977, Jane and Michael Stern wrote for New York Magazine that Louis Lunch, a small lunch wagon-turned-greasy spoon diner in New Haven, claimed to have created the sandwich through patented "New England thriftiness," which saw the original owner, Louis Lassen, grinding up leftover steak, forming it into square patties and serving it on toast.

"The dish actually had no name until some rowdy sailors from Hamburg named the meat on a bun after themselves years later," the Sterns wrote. They then noted that "all this history is subject to dispute."

One assertion, however, that I never questioned was that the first place to gild the simple hamburger with a slice of golden-yellow cheese was located practically in my backyard. That is, until now.

I moved to Louisville, Kentucky, to attend Bellarmine University, a Catholic liberal arts college tucked in a largely residential neighborhood. I don't remember much about my original campus tour, but I do remember the guide — a communications major whose broad smile seemed powered by the two iced coffees she carried — walking us down into the refurbished university dining hall.

"The food here is actually pretty good," she said, gesturing vaguely at the verdant salad bar.

"But" — and at this point she lowered her tone to an almost-conspiratorial whisper — "the place that invented the freaking cheeseburger is just up on that hill."

One of the dads on the tour asked if the burger was any good and she shrugged, the ice cubes in her coffees rattling gently against the interior of the plastic cups. "I never got to try it," she said. "It was called Kaelin's. They're gone now, but apparently they were great."

I loved this bit of trivia and loosely clung to it for years.

After a while, Louisville sort of became my adopted hometown and swapping fun facts about the city was a way of demonstrating a kind of belonging, I suppose, in a place where lifelong residents are pretty close-knit. Like, sure, I didn't go to high school here, but did you know Louisville used to make like 90 percent of the disco balls in the United States? Our parents didn't take first communion together, but what do you think about the legend of the Pope Lick Monster?

I was recently showing a family friend's daughter the Bellarmine campus and, much like the very caffeinated tour guide I'd once had, I gestured up the hill and said, "Hey, see that restaurant up there? They invented the cheeseburger."

She raised an eyebrow and, before returning to scrolling Instagram, asked; "Are you sure?"

In 1934, Carl Kaelin, a failed chicken farmer and former whiskey bootlegger, scraped together $680 and, alongside his wife Margaret, opened an eponymous family restaurant. That same year, they started selling a cheeseburger — a pressed beef patty topped with American cheese and served between a yeast bun — for 15 cents, and the mythologizing began.

Throughout the years, numerous publications, from Southern Living to Louisville's Courier Journal, repeated the claim, as did TODAY Show co-host Al Roker, who used to also host the popular Food Network program "Roker on the Road." Often this was done with a slight wink — much like the hamburger, there were other contenders for the title of inventor. But local pride surrounding the idea that, for better or worse, a dish that was emblematic of American culinary identity had been crafted here was strong.

Kaelin's had another claim to fame. As the Courier Journal reported, Carl Kaelin was friends with Kentucky Fried Chicken founder Harland Sanders before the Colonel launched his 11-spice recipe that went on to earn international fame. Kaelin's daughter, Irma Raque, told the publication that she remembers when Sanders approached her father about selling his fried chicken at their restaurant.

"He came to my daddy on a Christmas morning," Raque said. "We were opening gifts, and he knocked on the back door. Mother answered and she said, 'Pappy Sanders, what are you doing here? It's Christmas.'

For decades, Kaelin's sold Sanders' chicken at their restaurant and even went on to open a second location, aptly called Kaelin's Kentucky Fried Chicken. The family, however, did not invest in Sanders' franchise idea. As Tommy Raque, Irma's son, told the Chicago Tribune in 1992, "Granddad couldn't see putting 10,000 bucks into it. If he only had, I might not be standing here, frying cheeseburgers."

But, as Raque told the Tribune, Carl Kaelin never saw himself as a figure who existed in the shadow of Harlan Sanders. Proud of his own place in American history, Kaelin used to boast that he would give several thousand dollars to anyone who could disprove his claim that he was the first restaurant offering cheeseburgers.

During his lifetime, no one took up the challenge.

After Carl's death in 1978, Raque kept things running until she eventually sold in the early 2000s. The restaurant then changed hands several times before operating as a loosely Irish-themed sports bar called Mulligan's for five years, before finally shutting down in 2009 — at that point, seemingly for good.

When I attended school, the building was just a tired-looking, empty shell. However, the bronze plaque that had long been posted on the exterior, reading "Kaelin's: Birthplace of the Cheeseburger," was still affixed to the south-facing wall.

Stephen Hacker, a food historian and author of "Lost Restaurants of Louisville," doesn't believe the cheeseburger was invented here, though, he said in a recent phone call, he hates to "burst anyone's burger bubble."

"I did research for my book and there's an image of a menu from 1928 for O'Dell's in Los Angeles," Hacker said. "And it offers a cheeseburger. And then I found a little later, in Pasadena, The Rite Spot and — and this is a little flimsy to me — a 1964 TIME Magazine article suggested they were the inventor of the cheeseburger."

Hacker said that for awhile, he thought that perhaps Kaelin's was the first restaurant in the city, or even the region, to create the cheeseburger, but when perusing through the Courier Journal's own archives, there was a 1932 advertisement for The Little Tavern — which he described as a "White Castle knock-off" — that stated they had cheeseburgers on the menu. That would have been two years before Kaelin's even opened their doors.

"And I mean, I understand why they would have said that — it's promotion, it's notoriety," Hacker said. "I will say, as a longtime Louisville resident, the idea that the cheeseburger was invented here, by the Kaelins, was very cemented into the local lore."

And so it remains, to a certain extent.

I ran a (very unscientific) Twitter poll leading up to the long weekend asking Louisville residents whether they thought the cheeseburger was actually invented at Kaelin's, and a little over half of the 130 folks who responded said they did. Bellarmine University retweeted the poll with the caption, "We believe," followed by a burger emoji.

And why wouldn't you want to believe?

The cheeseburger is a marker of American identity. It simultaneously symbolizes commercial excess —  when viewed through the lens of the supersized Big Mac — and a kind of scrappy frugality when boiled down to its basic parts: minced meat, a simple bun and processed cheese with a low melting point. It's a reliable choice on both steakhouse and diner menus. It's a food of comfort (when I had my first "real break up" in high school, I remember my mom driving me for a late-night Wendy's cheeseburger) and backyard celebration. Bad cheeseburgers are hard to make and good ones are divine. Who wouldn't want to have a slice of that history?

Put another way, no one is scrambling to lay claim to the invention of the turkey sandwich.

In 2018, a trio of restaurant owners — Bill DuBourg, Chris Fenton and Matt Skaggs — moved into the old Kaelin's space and opened a new burger joint called 80/20 at Kaelin's. "A lot of people think we're reopening Kaelin's, and we're not reopening Kaelin's," DuBourg said in an interview with the Courier Journal. "We're kind of paying homage to what Kaelin's originally was, but we're bringing it into the new age."

They cleaned up the "Birthplace of the Cheeseburger" plaque, but note on their website that "this claim to fame is argued amongst historians and the real origins are unconfirmed for the record books."

Their throwback burger, called Kaelin's Original Cheeseburger, features a slightly-crisped 4-ounce patty on a potato bun with melty American cheese, Dusseldorf mustard, onions and pickles. It's pretty stellar — enough so that, when writing this story, I found myself craving one the entire time.

After a couple hours of writing on Friday, I pulled into the Kaelin's lot to grab one and a chocolate milkshake. While waiting for my order, I saw a man leaving with a couple of takeout bags. He said his son was in town from college and he'd ordered four burgers; he'd eat one and his son would eat three.

I asked what he thought about the claims that the original Kaelin's had invented the cheeseburger and he thought for a moment before sort of laughing and lifting the to-go bags into his front seat. "I don't know about that," he said. "But they make a damn good burger now."

And I suppose that being one of the first is still a damn good story.