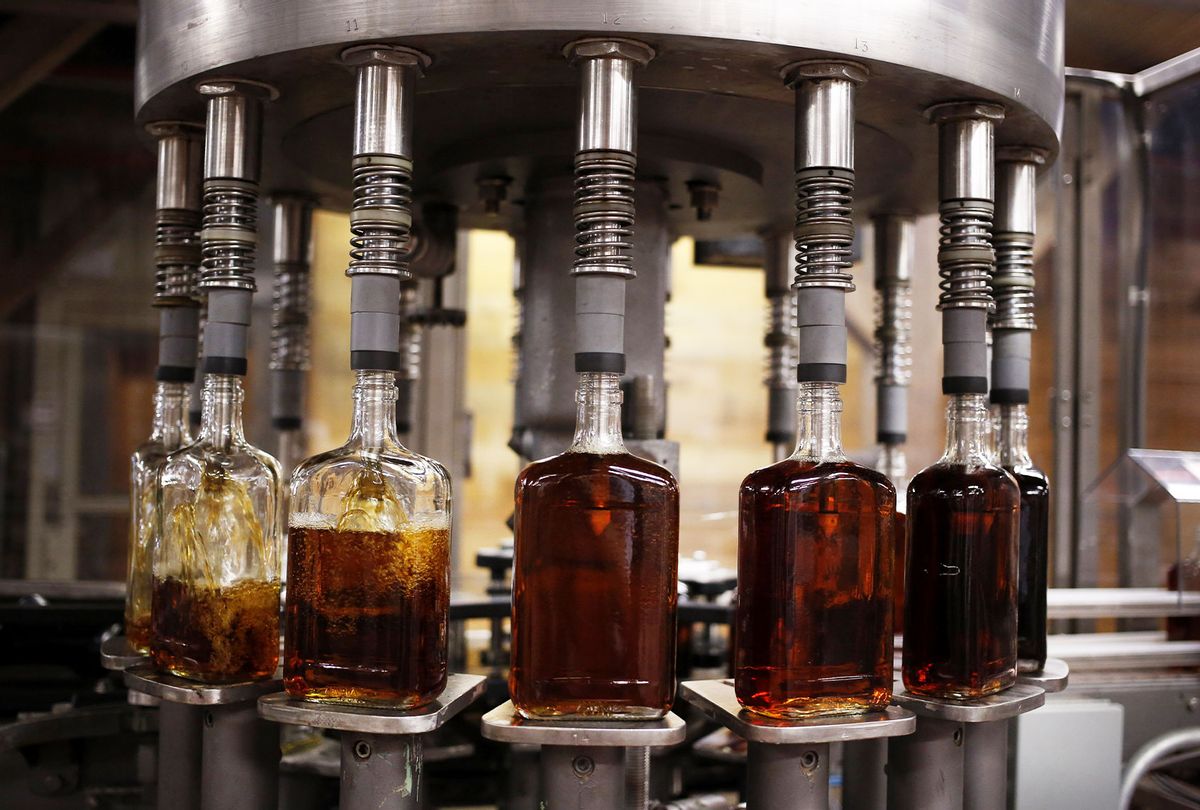 A group of 10 men and women wearing ball caps and carrying picket signs reading "Keep Calm and Be Union Strong" and "Heaven Hill on Strike, Support Local" gathered Wednesday on a steep, grassy knoll in Bardstown, Ky. About once a minute, their conversations were punctuated by the horns of rumbling pick-up trucks and semis speeding down the state highway — a response to the group's hand-painted sign urging passersby to "Honk for Support."

"There's some gray areas in the contract that we don't like," Mike Corbitt, one of the strikers, said. "Basically, it's going to end up making us work seven days a week with no overtime. We just feel like Heaven Hill has always preached to us that we're family-oriented."

"You see my family, if you turn around," he added after pausing and gesturing up the hill. "It's these guys and gals sitting on this picket line."

The nearly 420 employees of Heaven Hill who have been on strike since Sept. 10 are represented by the United Food and Commercial Workers Local 23D. The bourbon distillery "signaled that it wanted to assign new hires to nontraditional schedules that would include weekend work," Local 23D President Matt Aubrey told the Associated Press.

RELATED: No contracts, no snacks: Everything you need to know about the Nabisco strike

Current employees claim that the company has not been transparent about how the new weekend shifts would impact their work schedules. They voted overwhelmingly to reject a new five-year contract offer, according to Corbitt.

"We're not here to bankrupt them by no means," he said. "We just feel that the last contract — it was pretty much a smack in the face. We want to get back to work, but we're determined to strike as long as it takes."

That strike is still ongoing.

In July, as the Pacific Northwest faced historic, sweltering temperatures, workers at the famed Voodoo Doughnuts went on strike after attempts to mitigate the effects of the heat — wet towels, chilled Gatorade and shifting production hours to cooler times of the day — were unsuccessful. Some employees reported feeling nauseous and shaky, especially when working by fryers, where ambient temperatures reached nearly 100 degrees Fahrenheit.

And in February, fast food workers in 15 cities, including Atlanta, Chicago and Detroit, held a Black History Month strike to demand that chains like Burger King, McDonald's and Wendy's increase minimum wages to $15 an hour.

These strikes highlight the growing tensions between food industry workers and corporations, which have only been further illuminated by the ongoing COVID-19 pandemic. While many industry workers' jobs were deemed "essential" by the government last year — and many Americans realized for the first time how precarious the nation's supply chains are as they faced empty supermarket shelves — workplace conditions didn't necessarily improve.

Food industry workers have had to navigate new health and safety issues, irate maskless customers, and in some cases, the discontinuation of "hero pay." Meanwhile, many food corporations saw record profits.

Nabisco, for instance, reported more than $5.5 billion in profits in the second quarter of 2021; the company's CEO, Dirk Van de Put, received almost $17 million in total compensation in 2020. In contrast, the median employee compensation is $31,000. To keep up with the increased demand, Nabisco's parent company, Mondelēz, began moving some workers from traditional 9-to-5 work schedules, sometimes to 12- and 16-hour shifts.

Heaven Hill is in a similar position. Kentucky has been in the midst of a "bourbon boom" for over a decade, which has served the distillery well. In June of this year, the company opened a new $19 million expanded visitor's center in anticipation of post-pandemic tourism.

However, the distillery recently terminated employee healthcare coverage and benefits due to "the union contract expiration and resulting strike between U.F.C.W. Local 23D and Heaven Hill," according to a Sept. 11 letter from the distillery obtained by Salon.

"Your current coverage will be reinstated as soon as the work stoppage has ceased, concurrent with the ratification of the new contract, and you have returned to work," the letter said.

RELATED: Where are the "wine dads"? How gendered alcohol merchandise speaks to inequity in domestic labor

At the same time, the bourbon community has begun to apply pressure on Heaven Hill. Numerous bars across the state have taken Heaven Hill products off their shelves, including Buffalo Wings and Rings in Bardstown. District manager Jessica Raikes told local TV station WHAS that she supported the union workers.

"Without us and them, who are they?" she said.

Bourbon enthusiasts have also taken to Twitter with a message for the distillery.

"As a @HeavenHill1935 consumer, I support its workers on strike against healthcare cost hikes & drastic changes to their schedules, including overtime cuts," Steve Arnold tweeted. "Heaven Hill Distillery: give your workers a FAIR contract that keeps America's distillery jobs good jobs!"

Corbitt, meanwhile, is eager to get back to work; however, he plans to be on the picket line until the situation changes.

"We come together, and we're gonna stay together," he said. "We need respect, and it's high time we get it."