Restaurants are trying to work within the "new normal," but for a number of reasons, food prices haven't stabilized 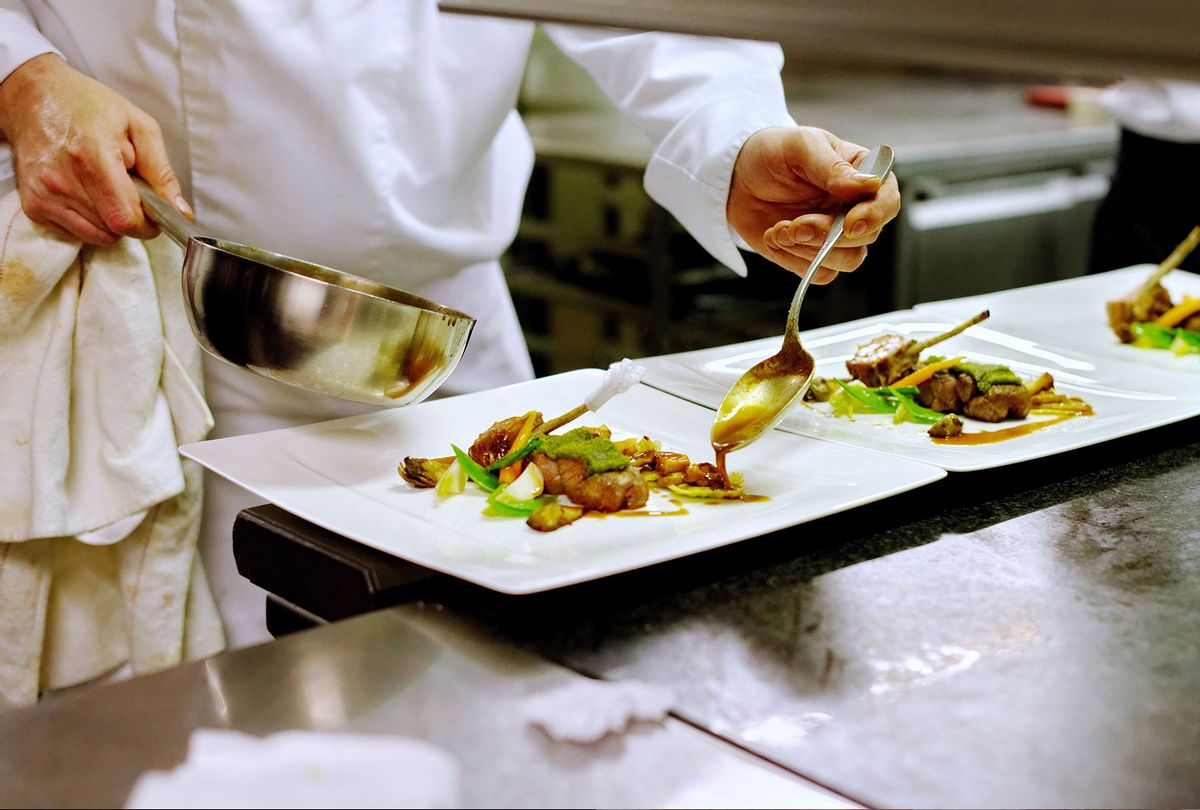 Since the World Health Organization declared the novel coronavirus a global pandemic in early March, restaurants in the United States have been attempting to stay profitable amid mandatory safety closures and service restrictions. They have adapted in innovative ways, from transforming unused dining room space into makeshift community bodegas to creating cocktail kits for customers.

Many states have since reduced service restrictions; every state has now allowed restaurants to reopen for dine-in service of some kind. But even as restaurants adapt to the "new normal," the pandemic set off a series of supply and demand inequalities, and as a result the price of essential ingredients like meat and dairy has yet to normalize.

Salon breaks down the costs restaurants are contending with in the pandemic era, and some of the ways they are attempting to stay afloat.

Meat processing plants have been hit incredibly hard by the pandemic, as legions of industry workers were diagnosed with the novel coronavirus. A month after President Donald Trump issued an executive order on April 28 encouraging meat plants that had shut down to curtail the spread of the coronavirus, more than half of the 30 meat processing plants that had closed were reopened. Over the month that followed, the number of Tyson Foods employees with the coronavirus rose dramatically, from less than 1,600 a month ago to more than 7,000, the Washington Post reported.

Despite increased safety measures, like protective gear and updated ventilation systems, implemented across the industry, employees work in close conditions and, some factories report, social distancing recommendations are nearly impossible to enforce. "This scenario highlights the potentially fatal cost of reopening the economy," Salon's Nicole Karlis wrote back in May, "and emphasizes how difficult it will be to go back to 'normal' at busy workplaces like these." This is disastrous, first and foremost, for vulnerable workers. It has also resulted in meat price fluctuations over the last six months.

Before Trump's executive order, John Tyson, chairman of Tyson Foods wrote in an April blog post, "as pork, beef and chicken plants are being forced to close, even for short periods of time, millions of pounds of meat will disappear from the supply chain." In the grocery store meat aisle at the time, many national chains started implementing purchasing limits on items like ground beef and pork products (my local Kroger, for instance, had signs posted for about a month restricting buyers to two items from the butcher's counter).

Restaurants weren't immune to the rising costs. According to a Business Insider report on a Buyers Edge Platform analysis of $1.3 billion in purchases restaurants made in February and May, meat costs have steadily increased during the pandemic — standard beef cuts rose about 87%, ground beef patties were up 81% and chicken breasts rose by 23% per case in the same period.

Brad White, the owner of the Michigan-based Goog's Pub & Grub, told the Holland Sentinel in May that the cost of "everything has just skyrocketed."

But the slow decline in prices often isn't enough to save restaurants that are really hurting. Goog's, for instance, made national headlines after implementing a standard $1 Covid Surcharge for each order, but announced late last month that they were closing.

The humble egg has made headlines throughout the pandemic, from news of people "panic buying" baby chickens to reports of "egg hoarding." Prices have increased — sometimes by as much as three times the pre-pandemic cost — and both home cooks and restaurants have been impacted.

But unlike in the case of items like pork or yeast, where price increases can be attributed at least in part to interruptions in the production pipeline, there have been multiple allegations of price gouging in the egg industry.

As the New York Times reported, Texas attorney general Ken Paxton and a group of private individuals in California filed suit separately in late April against Cal-Maine Foods, the largest egg producer in the United States, for what they call "excessive, unfair, illegal profits during the coronavirus pandemic."

"The Texas lawsuit contends that Cal-Maine, which owns its entire production and distribution process, faced no supply issues or other disruptions to drive up costs," wrote reporter Neil MacFarquhar. "It is a 'powerhouse' both in Texas and nationally, the suit said, producing one-fifth of the eggs in the United States under brand names including Eggland's Best, Land O'Lakes, Farmhouse and 4-Grain."

The company has strongly denied the allegation.

"The lawsuit alleges that Hillandale has raised its prices not because of increased costs, but simply to take advantage of higher consumer demand during the pandemic," said a press release announcing the lawsuit.

Let's rewind to 2014. Things were good for Big Dairy as the average farmer's milk prices rose to $2.16 per gallon in September — the highest level on record at that point. Restaurants felt the effects. As the Washington Post reported, many menu items from popular chains became more expensive to cover the increase in ingredient costs.

"Chipotle delivered a blockbuster quarter overall, recording a 20 percent increase in sales at its restaurants open more than a year," wrote reporter Sarah Halzack. "But executives said that higher food costs, including for cheese and sour cream, ate into the burrito chain's profit margins this quarter."

At Panera Bread, the cost for dairy items was up $2.5 million over the same quarter the year prior, while the Cheesecake Factory — which relies heavily on cream cheese for its signature desserts — said higher dairy prices cost them $4.3 million in the quarter, or about $0.06 in earnings per share.

In that sense, the global dairy market is deeply volatile. After the pandemic hit, and many consistent wholesale buyers like restaurants and school systems closed, the nation's largest dairy cooperative, Dairy Farmers of America, estimated that farmers were dumping as many as 3.7 million gallons of milk each day.

"And the costs of harvesting, processing and then transporting produce and milk to food banks or other areas of need would put further financial strain on farms that have seen half their paying customers disappear," David Yaffe-Bellany and Michael Corkery reported for the New York Times in April. "Exporting much of the excess food is not feasible either, farmers say, because many international customers are also struggling through the pandemic and recent currency fluctuations make exports unprofitable."

Wholesale dairy prices dipped to five-year lows, as a result, but then they started to surge, especially in the cheese sector. According to a report by Wisconsin Public Radio, the wholesale price of cheese plummeted to $1 per pound in April, skyrocketed to $2.81 per pound by June, and has settled at $2.70 over the last few weeks.

John Umhoefer, executive director of the Wisconsin Cheese Makers Association, told the station that the industry was on "a roller coaster like we've never seen before."

"It's not unusual for the cheese price to move a penny or two and make news in our industry," he said.

While Umhoefer said that supermarkets tend to absorb some of the price hikes to encourage consumer spending, it's likely that reopening restaurants that are refilling their supply of perishable ingredients will feel the effects of the fluctuations.

You may remember the Great Yeast Shortage of 2020 which began as hordes of amateur bakers stocked up for their new at-home activity.  For the four-week period ending April 11, yeast sales jumped 410% year over year, according to market research firm Nielsen.

"It's just that everybody wants to make bread at home, I guess," Bob Moore, founder of Bob's Red Mill, told Quartz.

In an interview with the New Mexico Political Report, Patti Stobaugh, the president of the Retail Bakers of America, reported that some of her organization's members said they had trouble acquiring certain ingredients necessary to make their baked goods.

"We did run into problems with yeast early on. However, our suppliers have been very good to take care of us. I know a lot of smaller operations have had trouble sourcing the type of flour they need, and yeast," Stobaugh said.

Martha Jimenez, owner of Jimenez Bakery & Restaurant in Lubbock, Texas, was one of those bakers. She told the Lubbock Avalanche-Journal in June that yeast still wasn't available from her normal supplier.

"The people that normally deliver it to me, they say they don't have it," Jimenez said over the phone on Monday. "I had some from before, but I'm about to run out. I keep telling them every week, but I still haven't been able to get any."

Some bakers turned to independent online sources, but the increase in demand drove prices up. As USA Today reported, a 2-pound pouch of Red Star Active Dry Yeast was listed for about $7 by a third-party seller on Amazon at the beginning of March, and surged as high as $48.95 on March 24, according to Amazon price tracker Camel Camel Camel. The price is currently down to $12.82.

In addition to supply and demand irregularities that affect the price of essential ingredients, restaurants are also having to manage the cost of non-food items like additional takeout containers, face masks and gloves.

According to Restaurant Business Online, 42 percent of restaurants that didn't previously do delivery added the service; echoing that statistic, Grubhub reported in early August that a net 25,000 restaurant partners had joined the platform since May for a total of 225,000.

But delivery packaging is not immune to production snags. Natha Dempsey, the president of the Food Packaging Institute, told the publication that at the start of the U.S. quarantine, Europe and Asia were already shut down for weeks, and problems developed over importing materials for containers and disposables. Further issues were caused by reduced labor overseas and transportation delays.

Sourcing items like cleaning supplies, PPE, gloves and hand sanitizer have all presented similar issues for restaurant owners at various points during the pandemic; and while supply has largely caught up with demand, those same restaurant owners are still adjusting to paying for these additional necessities.

Rick DeCuffa, the general manager of Joey's Italian Restaurant in Syracuse, N.Y., said in late July that the restaurant used to spend only a few hundred dollars a week on such supplies, but are now spending up to $1,400.

How restaurants are adapting

Individual restaurant owners, like Brad White of Goog's Pub & Grub, implemented $1 or $2 COVID-19 surcharges to cover additional costs of running a restaurant right now, like increased food prices or having to budget for extra sanitization measures.

But now some cities are looking at legislation that would allow restaurants to add a standard surcharge to all orders. On Sept. 17, as Eater reported, New York City Council voted in favor of a bill that will give restaurants in the city the option to add a surcharge of up to 10 percent to diners' bills as an economic recovery support measure during the pandemic.

"The provision will go into effect immediately after the mayor, who is in support of the bill, signs it into law," Eater's Erika Adams wrote. "It will extend until 90 days after indoor dining at full capacity is allowed."

"This bill will give restaurants the freedom they need to increase revenue to help cover rapidly rising labor and compliance costs and keep them in business," Councilmember and bill sponsor Joseph Borelli, whose district includes the south shore of Staten Island, said in a statement.

Surcharges are already allowed elsewhere in the state and in other U.S. cities including San Francisco and Los Angeles, but without meaningful support from local and federal governments — in the form of relief funds that small to medium-sized businesses can access, or grant and low-interest loan opportunities — many restaurants won't survive the pandemic.