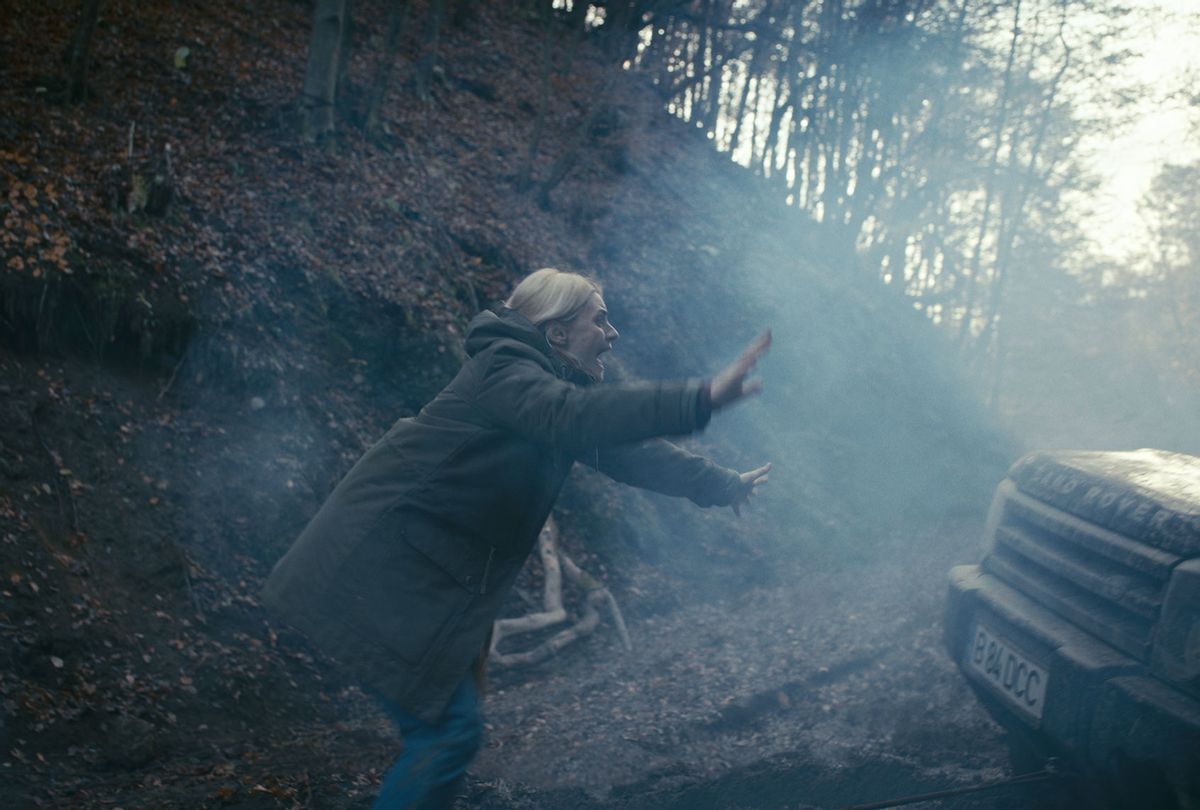 En route to one of their drop offs, they meet an old man, Kente (Luca Sabin), who they agree to drive to a nearby sawmill. However, their Land Rover gets stuck in the mud, and Kente wanders off on his own. After the trio drive off, they get stuck in an even worse spot on the unpaved road. Dan goes off to get help. Meanwhile, Maria and Ilinca are met by a Roma man and his son who tell them there is no sawmill, and, in their efforts to assist with moving the vehicle, the men make the bad situation even worse. Things only go downhill from there. With the wintry night falling, Maria insists they find Kente who might freeze to death.

Muntean punctures the bleeding heart liberals with pointed comments about altruism, privilege, and inequality, while also making points about the ineffectual government (the mayor was supposed to send help). That the humanitarians are attended to by the very folks they are there to assist is an irony not lost on viewers.

The filmmaker, who is one of the best directors to come from the Romanian New Wave, spoke to Salon about his new film, the prejudices of people and the irony of altruism.

What can you say about the tone of "Întregalde?" For some viewers it will be a kind of horror film, but for me, it's a dark frustration comedy.

I'm not really good at labelling my movies. You may be right. I don't know. I didn't mean it as any type of genre. It's a little comedy, there's a little tension There's a moral statement in it. There's a little bit of everything.

What inspired this story? The film uses the stuck Land Rover as a metaphor. What points did you want to make here?

It was 10 years ago when I found out about these humanitarian trips organized by off-road adventure clubs. They play Santa Claus. They organize and gather food and [presents] and deliver to these remote Romanian villages. In the winter, it's really hard for these people to get around. The roads are really bad, and they are quite isolated. I thought these trips are a good starting point to question the motives of generosity and altruism and what makes us do these kinds of things. Of course, that questions if it's something you are doing for yourself, that you impose a moral standard on this kind of thing.

What decisions did you make regarding the characters and the situations they faced? There is minimal backstory but as things unfold, we get to know more about the characters through their behavior and decisions. It is a canny approach to storytelling.

When we wrote the script, with Alexandru Baciu and Razvan Radulescu, my cowriters, we were experimenting with building the characters without telling too much of their biographies. They are characterized by actions first and foremost. There are small side stories that allow you to deduce things about them, but there are not strong cliffhangers. This is an interesting and new approach for me to tell a story. It's really tricky and we wanted to play with the prejudice of the viewer. Folks think it's a thriller or a horror story, or that something bad is going to happen to the characters unrelated to the main story. Because we are taking about the prejudice of main characters towards to the locals and this world that they are visiting, we wanted to play with prejudice of the viewer. It's interesting that if you give your characters [backstory], you open the door of prejudice, but not doing this is more intriguing.

How much of the film was improvised?

It was not improvised. We knew what we were doing in the shooting, but it changed before the shooting during rehearsal time. Some of Kente's stories were his stories, because he had the same job as the character, so he told me the stories before we started shooting and we inserted them into the dialogue. I modified things all the time during rehearsal. We shot in 29 days, after two weeks of rehearsal in Bucharest without the locals and rehearsed another two weeks on location. This is a movie we can shoot during the pandemic because we were in a safety bubble. For these people lockdown is way of life! They are isolated by default.

How do you want viewers to identify with the characters? Are we supposed to decide what we would do in this situation? Would you get in a car with the Roma as Ilinca does? Would you go out in the middle of the night to save Kente like Maria does?

I had this debate at a live Q&A about who would have gone to the sawmill to help Kente. And it was half of the audience. I didn't start the debate, but the film engaged the audience that deeply. The interesting thing for me as a director is that I don't judge my characters or give lessons from a pedestal. It's just me posing questions — what would you do in this difficult situation? Everyone can be generous when they are comfortable, but when their life is in danger, you have to think twice. If you are doing it, maybe you are doing it more for yourself?

What happens with Kente is more important to Maria than it is to Kente. I like that viewers identify themselves with different characters. They take the position of Maria or Dan. Dan has his own reason when he says Kente will die anyway. That if Kente wants to go to the mill, in the dark and cold, it's his destiny. I like that you can choose who you want to identify with. There is no one or right answer. It's important that the people are lucid. They know that generosity comes with this personal gratification. It's OK to do this, but there is a moral standard we are trying to achieve. Knowing this, it is important to question your actions.

Yes, you are satirizing the bleeding heart liberals here.

And they are eating the food they are bringing to the locals! But they have to do this because it's the only food they have!

Do you think your film will play differently in the U.S. than in Romania?

I have had screenings in Cannes and Cluj [a city in Transylvania]. The audience reacted more or less ways at the same points; it wasn't that different. The characters don't understand what the Roma father and son are saying. Kente is almost as odd and strange and alien to the middle class Romanian city folk as he is to the American audience. The way he talks is funny, and you can understand it better if you are Romanian. But he is strange for us as well.

I love that Kente's character is enigmatic. Someone says he is gay, and we don't know if that is true or not. There are several moments in the film where the characters are getting misinformation. Can you talk about that? There is a political overlay there.

You might be right, but that was not my intention to have a political view when we made the film — but it might be a valuable angle. I agree. The "gay" issue is funny, it's related to the middle class urban people's prejudice. For them it is so exotic that there are gay people in this area of the country. It makes him more alien. And it could be untrue. The Roma people have prejudice about Kente as well. It plays with what you hear, and what your culture makes you assume about these characters.

What can you say about the environment of the forest as a crucible? How did you work on building tension and creating a space that was both organic and foreboding?

Nature was intended to be a character. In that area, the landscape changes every two to three kilometers. There are very beautiful open spaces and valleys in the daytime, and it's really pleasant; you feel nothing wrong can happen. Immediately, you go in the forest and it becomes a dark, unknown character, and the characters are afraid of the unknown. We played with this.

How do you handle crisis? Has your experience as a filmmaker helped you with problem solving and being grace under pressure?

I am really, really involved in this process. I'm like the football trainers who want to go in the field and play with the team. I think I can handle pressure. I believe that if there's a problem, there's a solution. This is my philosophy. To abandon everything is really hard. I have to be proved wrong several times to abandon a situation.