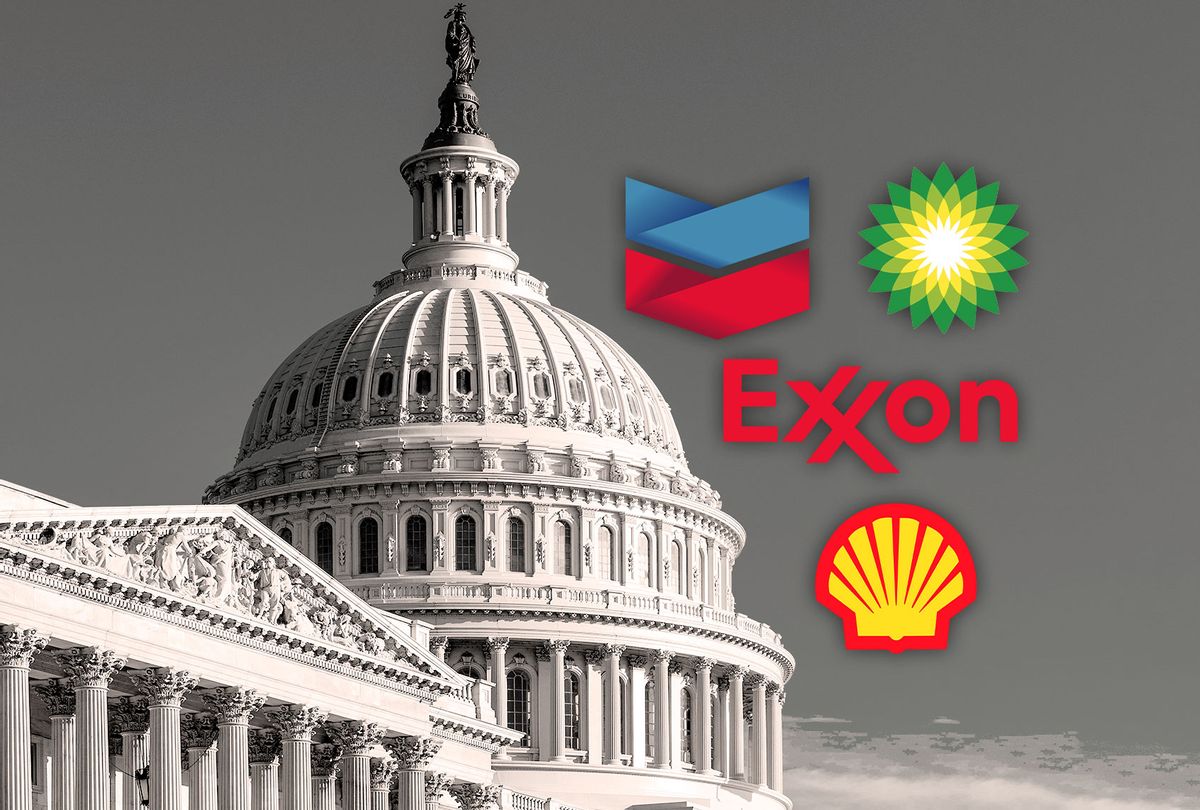 In the 1950s, when an Army lawyer felt compelled to stand up to the popular far-right demagogue Sen. Joe McCarthy, R-Wisc., he famously asked "Have you no sense of decency?" Four decades later, as seven executives from Big Tobacco were grilled on how their industry lied to consumers about their products' health risks, their various lies and scientific errors cost them their jobs as they battled federal investigators over perjury accusations. While the Big Oil executives did not receive the same headlines as the McCarthy or tobacco events, their testimony before Congress on Thursday was just as historically significant.

For the first time ever, four chief executives from some of the world's largest Big Oil companies had to speak publicly and under oath about whether they have deliberately deceived the public about climate change.

In terms of memorable quotes, Rep. Alexandria Ocasio-Cortez, D-N.Y., summed up the prevailing sentiment among Democrats from the House Committee on Oversight and Reform when she told the executives that people will "live the future that you all are setting on fire." The "you" in Ocasio-Cortez's statement included CEOs David Lawler of BP, Darren Woods of Exxon Mobil, Michael K. Wirth of Chevron and Gretchen Watkins of Shell. They were joined by Mike Sommers from the industry group American Petroleum Institute and Suzanne Clark from the United States Chamber of Commerce.

One prominent question was whether the petroleum industry is protected by the First Amendment if, through their speech, they create conditions that pose an existential threat to humanity's survival.

Rep. Jamie B. Raskin, D-Md., asked the gathered Big Oil titans if they "accept that the First Amendment does not protect fraudulent commercial speech." The executives in various ways deferred to their respective legal experts instead of answering the question, even as Rankin reserved his strongest language for Woods. After ExxonMobil was sued by the Massachusetts attorney general for lying to customers about climate change, the company had countersued arguing that peddling climate pseudoscience is a First Amendment right.

"I am not opposed to litigation against particular corporations – take Exxon, just for illustration – based on clear and convincing proof (to the satisfaction of a judicially supervised jury) that those corporations (or the individuals who direct their activities) deliberately falsified research results or other data in order to cover up their own knowledge about how and to what degree their own products or services and those who purchase them contribute to anthropogenic climate change," Harvard law professor Laurence Tribe told Salon in 2018. "Such litigation would be predicated on classic principles of economically motivated fraud and would avoid the pitfalls and perils of establishing an official scheme for determining what is true and what is false in the world of scientific claims."

As they tried to avoid the tobacco executives' strategic error of outright lying, and thereby risking perjury charges, the oil executives often found themselves trying to strike a delicate balance. When asked if they would pledge to stop funding lobbyists who aim to eliminate carbon emissions, and instruct their various trade groups to stop opposing electric vehicles, they refused. Their strategy was instead to acknowledge that burning fossil fuels drives climate change, claim that they support transitioning to clean energy and denying ever engaging in campaigns to deceive people about fossil fuels and climate change. They also emphasized that they are not willing to let the fossil fuel industry disappear any time soon.

This middle ground between stridence and deference was necessitated, in part, by a leaked video which showed ExxonMobil lobbyist Keith McCoy (then Exxon's senior director for federal relations) describing the company's support for a carbon tax as nothing more than an "easy talking point." Acknowledging that this clip helped prompt the hearing, Ranking Member Rep. James Comer, R-Ky., claimed the video was "deceptively reported and edited" and as such "the American people must question the legitimacy of the Democrats' actions." House Democrats, on the other hand, used that video as a jumping off point for calling out what they claimed were other examples of Big Oil's disingenuousness.

Rep. Katie Porter, D-Calif., called Big Oil for "green-washing," or misleading people into mistakenly believing they are environmentally friendly. To illustrate how they do this, Porter held up two jars with M&M candies. One of the jars, which was nearly empty, symbolized Shell Oil president Gretchen Watkins' plan to spend between $2 billion and $3 billion this year on renewable energy. The other jar, which was full nearly to the point of overflowing, symbolized the $19 billion to $22 billion that Shell plans on spending in the near future to explore for new fossil fuels.

"To me, this does not look like an adequate response to one of the defining challenges of our time," Porter argued. "This is green-washing. Shell is trying to fool people into thinking it's addressing the climate crisis when what it's actually doing is to continue to put money into fossil fuels."

Rep. Ro Khanna, D-Calif., made a similar point when he noted that the executives could easily tell trade groups like the American Petroleum Institute to stop funding marketing campaigns to thwart climate change mitigation policies like manufacturing electric vehicles. He added that Sommers, the executive of the American Petroleum Institute, was literally "sitting right next to you on the virtual screen." The executives refused to directly comment on Khanna's question.

Ocasio-Cortez had a pointed observation of her own for Sommers. "It's not lost on me that we are having a hearing today surrounding fossil fuel misinformation and disinformation campaigns on the same day that we are scheduled to vote on legislation that has been deeply influenced by the lobbying efforts of the fossil fuel industry," she told the executive, referring to the ongoing negotiations over President Joe Biden's legislative agenda.

Republicans attacked the hearing by claiming that it was un-American. Rep. Jim Jordan, R-Ohio, a staunch supporter of former President Donald Trump who faces of accusations of ignoring reports of sexual abuse when he worked for Ohio State, attacked the hearing as unethical.

Republicans also brought a former worker on the Keystone XL pipeline, Neal Crabtree, to testify that Biden had cost him his job by canceling the construction project shortly after being inaugurated to the presidency. "There seems to be no thought given to the hundreds of thousands of workers in this industry," Crabtree explained, adding that he had worked in the industry for 25 years and "I'm too far in life to be starting over."

If climate change goes unchecked, human beings will in the near future experience an increased number of extreme weather events like hurricanes and wildfires; prolonged periods of drought; rising sea levels that flood coastal areas, displacing hundreds of millions of people; and the breakdown of essential supply chains providing everything from food to microchips.