"The Trump campaign didn't want eyeballs on Rudy Giuliani on that day," the director says in a Salon interview 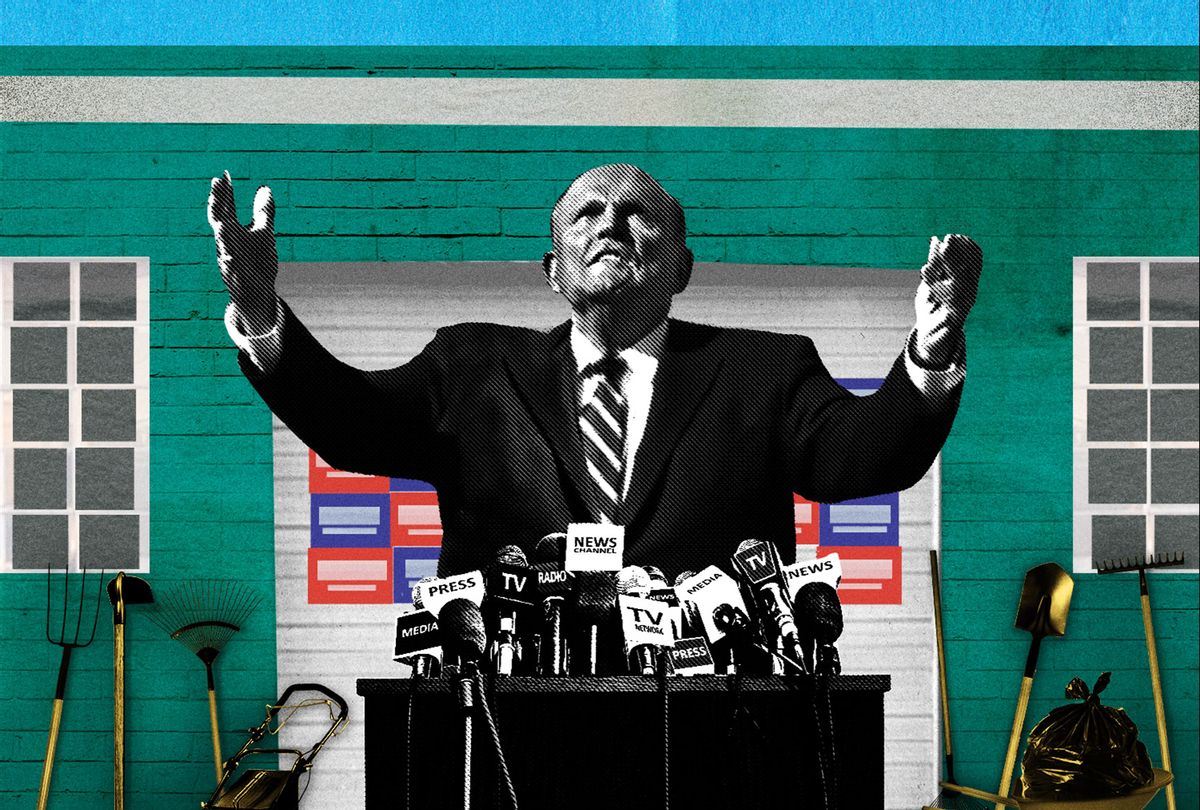 One year ago "Four Seasons Total Documentary" director Christopher Stoudt happened to be at home when his roommate's brother, the director of sales at a Philadelphia-based landscaping company called Four Seasons, texted a picture of Donald Trump's surrogate Rudy Giuliani sitting in a drab office behind a nameplate that said "Boss Lady."

"When it was happening, I just thought it was just one of the funniest things that I've ever seen," he told Salon in a recent phone interview. Hours later, that moment became part of a ridiculous press conference that transformed a small family-owned landscaping business into a meme and local landmark.

As a reminder, former-President Trump kicked off the foolishness by tweeting, "Lawyers News Conference Four Seasons, Philadelphia. 11:00 a.m." Then he posted a correction: "Big press conference today in Philadelphia at Four Seasons Total Landscaping. 11:30am!" The famed hotel chain was obligated to follow up by saying it had no relation to the landscaping company, which services local businesses around Philly.

But while subsequent coverage chased the reasons for Trump Campaign's strange choice for its campaign's final gasp – the election was called for Joe Biden mid-Giuliani meltdown – the Four Seasons staff and its owner, Marie Siravo, were abandoned to face a barrage of hateful voicemails and online harassment for hosting the event.

"Four Seasons Total Documentary" is part of MSNBC's push into the longform non-fiction space, with network president Rashida Jones serving as an executive producer on the project. Don't let its tongue-in-cheek title throw you – it is an entirely serious if good-humored breakdown of how the press conference came to be and how it impacted this locally owned business, presented from the staff's perspective.

RELATED: The Four Seasons Total Landscaping debacle is finally getting the documentary treatment it deserves

It also tells the story of how Four Seasons turned around a situation that nearly destroyed the livelihood Siravo built over 28 years from the ground up. The landscaping company's salvation came in the from of retaking the narrative, making themselves the epicenter of the joke. They are the reason Four Seasons Total Landscaping t-shirts became last spring's hipster fashion must-have.

That plucky tone also informs Stoudt's approach, starting with the fact that at around 28 minutes long, this documentary is appreciably shorter than the press conference that inspired it. Giuliani's ceaseless rambling expanded a show about nothing to 37 minutes and 21 seconds.

The piece may be more of an episode about an episode than a documentary, but its economic runtime doesn't take away from its worth. Within that time up Stoudt and his subjects, including journalists who covered the campaign and the event, clear up many commonly held misconceptions about of how and why it happened. But as the director insists, that's the least important part of the story.

His main emphasis is on the people who said yes to a campaign's request to host an event on its premises, and their amazement that they became  part of a larger story. To Stoudt, the press conference at Four Seasons was an appropriate bookend to a presidential era that began with a game show host descending a golden escalator.

Watching Trump's presidency end in front of a garage door next to some coiled yellow hose, he observed, "was kind of like the emperor-has-no-clothes moment for the Trump campaign, you know? It just sort of like it let us finally peek behind the curtain and see reality for what it was."

Keep reading for the rest of our conversation with the director of "Four Seasons Total Documentary."

What compelled you to film a documentary about, of all things, a press conference at a landscaping company?

It just seemed like an amazing opportunity to tell the story of 2020 and use this press conference as sort of an analogue for how crazy the year was, how divisive the election had been for so many people – it's  probably the most divisive election in my lifetime, at least. And I wanted to tell this underdog story of seeing this family take this opportunity and turn it to their advantage.

Because at first, the whole world hated them. They were getting endless phone calls and hate mail, and people thought they were endorsing the Trump campaign as a result of their hosting. They would have done this for any campaign, they would have done it for Biden, if he had asked.

You've done a lot of short form pieces, and one of them being a 60-second short that you did on Katrina, a very different kind of disaster. You seem to gravitate towards current events flashpoints that say specific things about America. What does this documentary tell you about American culture?

It was just interesting to spotlight what I felt was a collective sigh of relief for the country. In 2020, we were indoors, we were locked up in front of our computers. A lot of our American experience that year was online. And when this event happened, it became the sort of antidote to all the misery and dread that a lot of people had been experiencing. It also gave us this communal experience to bond over that wasn't traumatic and tragic. It was a light-hearted moment to show us that we should be able to laugh at ourselves.

It's also an interesting examination of the snap judgment people made about the company, simply for choosing to host a Trump campaign press conference. The owner never reveals what her politics are, but she still has such vitriol directed at her. As you said, by the time you got to Four Seasons the family had already turned the story around. But were they hesitant when you approached them?

They were hesitant at first. And the reason they were was because every outlet under the sun, and all of them wanted to know why it happened. Why did they book this press conference? The focus was completely shifting away from the family. And actually, they were supposed to be anonymous, right?

The press conference was never supposed to be announced that it was at Four Seasons. Then Trump made his tweet, and suddenly, they were placed under this magnifying glass. Suddenly, their reputation and their character was on the line. And it was a place they never asked to be.

For me, my focus has always been less on the why of it than the who of it. And in telling that story, the who of it, I can still touch on the Trump campaign and the dysfunction that was happening at the time. And the sort of unraveling of Rudy Giuliani right before our very eyes. I mean, the great irony is that had there not been this funny little screw up, no one would have ever seen this press conference.

And what I gleaned from the coverage in making the film was that the Trump campaign didn't want eyeballs on Rudy Giuliani on that day. He had been going off the rails, he had aides assigned to him to make sure that he wasn't creating more problems for the campaign than he had already. So by this perfect screw up, suddenly the entire world is watching.

And the reaction from the media was a little classist. Like, everyone was talking about how [Four Seasons Total Landscaping] was next door to a sex shop and across the street from a crematorium. The reality that this was just a small family-owned business, trying to support themselves, serving the needs of local businesses who needed landscaping, was sort of glossed over. Suddenly their character was on trial.

What did you do or say to put them at ease in terms of letting you into tell their story?

My family's from Reading, Pennsylvania, which is really close to Philly, it's about an hour away. So, you know, I don't have any Philly street cred, but I felt a sense of familiarity to the region. And I remember the first thing that I told them was that if we were going to make the film, they were gonna have to take me to a lot of good cheesesteak places. And yeah, we just sort of started laughing and joking around.  It felt easy for me to be able to sort of start joking with them and start stripping away sort of the "press" of it all. In other words, I approached them in a way that no one else had.

Did you take this to other outlets besides MSNBC? Or were you contracted to make it for them?

We definitely weren't contracted by MSNBC.

I asked that question because the branding of cable news has become very politicized, and MSNBC is seen as the liberal answer to Fox. You never state what the family's politics are, you simply tell the story. Did any portrayal of politics enter into forming the narrative?

I'll give some backstory there. The story changed a lot as it developed, right? Initially the tone was a little bit more comedic. And then I remember, on Jan. 6, I was in a Zoom meeting with my producer . . . and I got a text from a friend that said, "Hey, are you watching this? People are storming the Capitol right now." That moment was just such a tragedy for our country.

And after that I began seeing the direct line that you could potentially draw from Four Seasons to that moment. We had Rudy Giuliani in front of the crowd screaming, "Trial by combat!" The significance of the story and the power of the story really became apparent, and we needed to course correct. Then the goal became to be able to tell a story that could hold a mirror up to what happened without editorializing it in a way that sort of tipped our hand too much to what we as filmmakers believe.

Because when you make a film, you have to put your own biases aside. You have to be objective. And the phrase we like to use is warm hearts and clear eyes.

But I always go into making films with a really warm heart. I love to find the good in people and the humor. For me, the politics ultimately distracts, because that's not really the point.

Look, I'm a long-haired guy from California. And when I show up in Philly, in Holmesburg, with long hair, it's pretty obvious where I stand, you know. But that was never held against me.  And it wasn't really the point. It was always trying to let the moments speak for themselves.

You're always trying to tell as universal a story as possible. And this is about the American experience, and the American experience should be bipartisan. It should not be divisive. I think everyone can agree that the division that we experienced as a country leading up to this moment was incredibly toxic and created so much anguish for so many people. We wanted to do the opposite of that. We didn't want to create more division with our film.