From "OK" to "Let's Go Brandon": A short history of insulting presidential nicknames 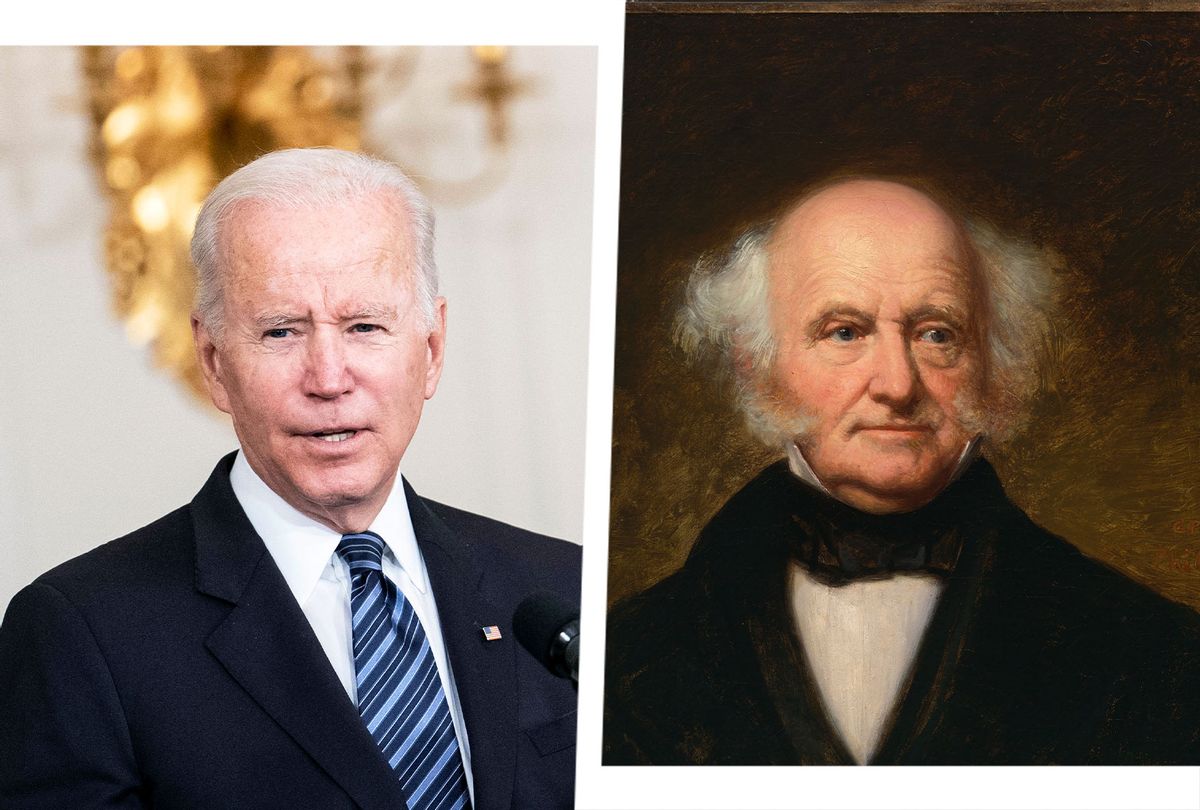 For those of you who have been mercifully spared this information, supporters of Donald Trump have started using the phrase "Let's Go Brandon" as a code for "Fuck Joe Biden." The craze began after an NBC Sports reporter at a NASCAR race in Alabama mistook the profane chant by some fans as an expression of support for driver Brandon Brown. Realizing that "Let's Go Brandon" does indeed sound a bit like a version of the vulgar insult (if sufficiently muffled), it quickly caught on as a stand-in attack on the incumbent president.

Now it's everywhere: On Trump campaign merchandise and among Republican politicians, on weapons parts and, of course, as a trending hashtag on Twitter. A Southwest Airlines pilot even came under investigation for uttering the phrase from the cockpit to a planeload of passengers.

"Let's Go Brandon" is an imaginative troll, specific to the age of the internet — but it's unlikely to have the staying power of the immortal presidential nickname "OK," which over the last 180-plus years has become the most frequently used word on the planet. While its origins remain controversial, historians have confirmed that it was widespread during the 1840 election, when incumbent President Martin Van Buren was running against former U.S. Army Gen. William Henry Harrison. Prior to that election, "OK" had been employed for a few years by New Englanders as a comical shorthand for "all correct" — that is, as an acronym for "oll korrect" or "ole kurreck," implying that the speaker was uncultivated or perhaps a non-English speaker.

The next stage in the "OK" story comes because Van Buren's nickname was "Old Kinderhook," a reference to his hometown in upstate New York. Van Buren supporters capitalized on the term's prevalence by forming "O.K. Clubs," urging Democrats to "Vote for O.K." and saying that it showed Van Buren was "all correct." Seizing an opportunity, Harrison's Whig Party tried to flip the script, claiming that Van Buren's political patron, Andrew Jackson, had signed papers as president "O.K." because he was too ignorant to know better that it was not "Oll Korrect." (It was commonly believed that Jackson was only semi-literate, which wasn't true, although he lacked much formal education.)

Harrison defeated Van Buren, but not because of the mocking usage of "OK." Both campaigns embraced the term and, more importantly, the Whigs developed a number of innovative techniques to push Harrison to victory. Harrison was further boosted by an economic depression that caused widespread hardship; under these conditions, almost anyone could have beaten Van Buren. But perhaps the popular phrase can still be meaningfully linked to that historical event: No prior election had ever had turnout above 60 percent, but in 1840 voter turnout was more than 80 percent — an inconceivably high proportion, then or now. (The 2020 election had the highest turnout in 120 years, and nevertheless only about two-thirds of registered voters even bothered.) It seems plausible that "OK" became so popular in large part because people heard it constantly that year.

It also didn't help Van Buren's image to be known as "OK." He never commanded the grassroots popularity that war hero Andrew Jackson had, and was widely perceived by the public as distant and stuffy — in contemporary terms, part of the "elite." Harrison was also a military veteran, dubbed "Old Tippecanoe" by the Whigs, in reference to a battle he fought in 1811 against the Native American confederacy under the legendary Shawnee chief Tecumseh. Compared to that colorful history (however it may appear to us today), Van Buren seemed like a nonentity, and being called "OK," a word that already had the connotation of "somewhat all right," clearly didn't help.

That helps us focus on the secret of effective presidential epithets — they zero in on a highly distinctive quality of the person in question and skewer it. Think of the catchy insulting monikers from recent history. "Tricky Dick" Nixon has an appealing rhythmic and percussive quality, but also captures the fact that Nixon was seen as a shifty and unscrupulous character long before the Watergate scandal. "Teflon Ron" Reagan was effective because no amount of scandal ever stuck to the relentlessly upbeat Reagan — partly because the press loved him and the Republican Party protected him, and partly because he literally had no idea what was going on in his own administration. "Slick Willie" Clinton perfectly encapsulated the unctuous salesman-cum-preacher mode so distinctive to the 42nd president — and doesn't it seem even more accurate today? George W. Bush was mocked as "Dubya," partly to differentiate himself from his dad and partly to point out that he was a prep-school kid from the uppermost level of society, masquerading as a Texan.

Trump's favorite nickname for his 2016 election opponent, "Crooked Hillary," was idiotic in substance but mercilessly effective. It was grotesquely unfair — Hillary Clinton has been investigated more thoroughly than almost anyone in current public life, and has never faced criminal charges of any kind — but that wasn't necessarily a drawback in the gruesome context of that campaign. The simplistic epithet captured the intense mistrust many on the right felt toward Hillary, going clear back to her husband's first election in 1992. Not coincidentally, it also confirmed the misogynistic stereotype of a conniving, untrustworthy woman.

"Let's Go Brandon" is entirely different. Unlike the other insults reviewed here, there is no deeper meaning that's specific to Joe Biden in any way. Describing him as "China Joe" or "Sleepy Joe" at least conveys specific insults, regardless of their merits. As I suggested earlier, "Let's Go Brandon" is a specific product of this era, but it asserts nothing about Biden rather than overt hostility — at a moment when the president appears embattled amid falling approval ratings.

"Let's Go Brandon" also does not strike me as an especially effective way to "own the libs," although there's some anecdotal evidence that Democrats and their supporters find it troubling. Hardly anyone personally identifies with Joe Biden to such an intense degree that they feel genuine distress when he is attacked. It's Trump supporters who feel that way about their hero, thanks to an unhealthy dose of narcissism by proxy and a profound buy-in to Trump's malignant normality. While millions of people are no doubt invested in Biden's success as president, they don't view him as an untouchable idol.

Finally, the insult fails because it implies that there is some taboo against criticizing Biden, which the last few weeks of plummeting poll numbers and policymaking headaches should have proven is spectacularly untrue. This is another example of Trump supporters' performative subversiveness, in which privileged white people play-act as victims while shilling for fascism. It's the obnoxious, quasi-jokey wish fulfillment that oozes from Trump's pores, boiled down to a single childish slogan.

As always with the Trump movement and Republicans, there's a powerful element of projection to "Let's Go Brandon," which exposes more about the people using it than about its target. In addition to revealing Trump supporters to be childish, vulgar and obsessed with their hero to an unhealthy degree — none of which is a big surprise — it also shows how much they dread being humiliated. "Let's Go Brandon" attempts to taunt Biden with the thing they fear most desperately — being publicly regarded as a joke.

Should Democrats respond with their own demeaning nickname for Trump? That depends on whether you think anything could ever stick to a man who seems impervious to ridicule, and whose innumerable lies, multiple apparent criminal acts and massive incompetence have never affected the intense loyalty of his faithful. It's not like there's a shortage of ample material for his opponents: Trump's followers can serve for the rest of world history as the ultimate example of "sore losers," for instance, as their champion is the only president to refuse to gracefully accept being fired by the American people, and had an extensive history of being a sore loser long before his claims about the 2020 election.

It probably won't happen, for the same set of reasons that Republican politicians usually move in lockstep but Democrats don't. The anti-Trump constituency has no coherent shared ideology beyond supporting "democracy" — which means different things to different people — much less a consistent message. It doesn't help that many liberals still believe in the failing creed, "We go high," fearing that playing dirty will both degrade themselves and backfire politically. But if a catchy disparaging epithet for Trump that nettled his followers actually got traction, from the Democrats' point of view that would be OK.

More from Salon on Donald Trump's Big Lie — and how and why it became so powerful: