Thanks to its stars, "Passing" is a masterpiece of subtle expression, rendered in black and white 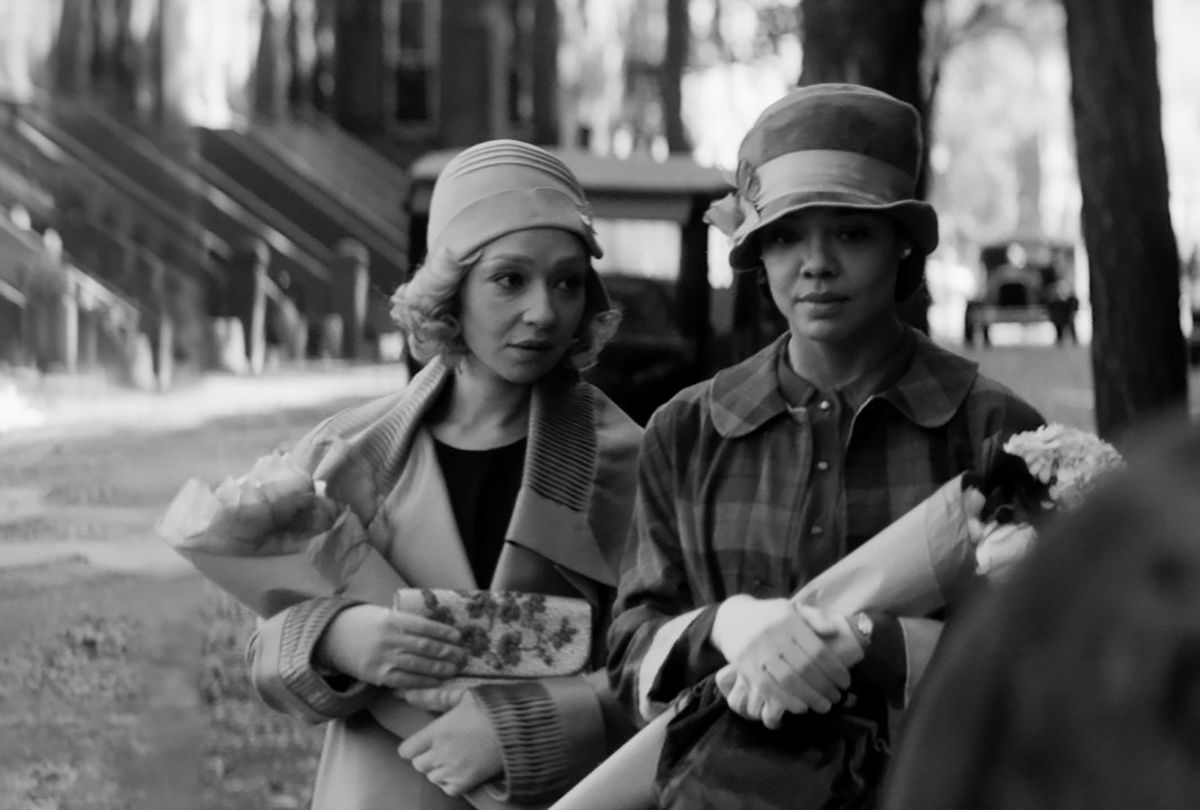 Under certain circumstances, and in the right setting, people tend to make assumptions about the company in their midst. This was true in Nella Larsen's 1929 novel "Passing," and it remains the case nearly a century later as its cinematic adaption, written and directed by Rebecca Hall, gains wide release.

Hall and cinematographer Eduard Grau demonstrate this from the moment they introduce Irene Redfield (Tessa Thompson) and Clare Kendry (Ruth Negga). Both women move through New York venues to which most Black people cannot gain entry because the white people for whom those places are intended assume they are also white.

Irene and Clare's lighter complexion enable them to avail themselves of the privileges associated with that. Of the two, Irene does so as a temporary indulgence; we meet her during a shopping excursion during which she wears her fashionable hat brim low over her eyes. She never quite relaxes, even as she's waited on by a white waiter in a fancy hotel with a restaurant that offers respite from the summer heat.

This is where she encounters Clare, who has lived in this world for years, enjoying the wealth of her white husband John (Alexander Skarsgård) and the freedom to do as she pleases along with it. The tradeoff is that since she's married to a devoted racist, she must divorce herself from her Blackness.

Related: Passing for white and straight: How my looks hide my identity

When Irene has the misfortune of meeting John, who blithely shares the nasty origins of the pet name he has for his wife, Nig (!), Irene asks him if he dislikes Negroes. "I don't dislike them," he replies casually. "I hate them." Then he claims that Clare hates them even more, evidenced by her refusal to hire Black servants.

To all of this Clare laughs with the lightness of Christmas bells, although slight shifts in Negga's expression betray a shame and whiff of insanity at the entire ordeal. Thompson's Irene laughs hysterically in response, which we take as her realization of being in on a hideous joke being played on John. These are defining scenes in the book sharply realized on screen by setting them in rooms flooded by light, making Thompson's and Negga's complexions register as a shade of white on the film's monochrome palette.

When Irene returns to her low-lit Harlem home and her brown-skinned husband Brian (Andre Holland) we see the reality of who she is. The lighting in Irene's rooms have the same effect on Clare's coloring whenever she visits, warming Negga's face to a richer tone under her sleek platinum curls.

This visually marks the lonely Clare's entry into the "true, good life" she believes her friend is living as opposed to the perilous bargain she's struck. Irene, however, doesn't necessarily see her existence in those terms. Earlier she tells Clare she would never fully pass because she has everything she could possibly need. When her once-lost friend is under her roof she admits, "I'm beginning to believe that no one is ever completely happy, free or safe."

"Passing," through Hall's unerring lens, evolves from a parable about seeing and being seen, of coveting that which we don't really know and our willingness to be deceived about appearances into a keen examination of class, gender and above all, envy. Hall approaches the material with a mesmerizing combination of connectedness and detachment that gives every scene a craggy tension underneath each demonstration of propriety.

Beyond this, it is quietly and assuredly exquisite. Hall finds magic in the pauses she creates to evoke 1920s Harlem, accentuating the romance of the place and era with Emahoy Tsegué-Maryam Guèbrou's sparkling piano trills and wide shots of regal brownstones. The audience feels the embrace of sweetness in the place despite Irene's professed doubts about her safety.

Much of that uncertainty manifests in her insistence upon sparing her young sons from learning the truth of how white Americans view Black men.  A conversation about whether their boys are too young to learn the truth about racist savagery and lynching echoes recent ill-conceived efforts by news organizations to raise that question in their coverage.

But then, these queries were posed on behalf of white families. Larsen wrote it into the Redfield's household conversation nearly a century ago. Hall weaves this into the storyline about the strain in Irene and Brian's marriage, another ice cube in the chilly wall growing between them that only solidifies as Clare more intimately insinuates herself into Irene's social circle.

Larsen's novel is an underappreciated work in the Harlem Renaissance literature pantheon for a number of reasons, one being that Larsen produced only two novels in her lifetime. Another explanation lies in the easy tendency to lump the story in with the "tragic mulatto" trope, a crude designation defined by works like Fannie Hurst's "Imitation of Life."

Hurst's story and the films it inspired, including Douglas Sirk's 1959 classic, view the stories of people of color adopting the trappings of whiteness from the perspective of a white central character. Sirk hired Susanna Kohner to play the fair-skinned daughter of Juanita Moore's character, a girl whose father was also light-skinned. She won a Golden Globe and was nominated for an Oscar for her performance. (In the 1934 version the role was played by Fredi Washington, a Black actor.)

Hall's adaptation of Larsen's story distinguishes itself from those works and other classics like it by hiring two widely recognized Black actors to play Irene and Clare, presenting them in settings where their characters' respective performances of white privilege allow them to blend in with others in their midst.

One can't assume these roles only could have gone to these actors or others the public knows to be Black. Hall wrote her script as part of her personal journey into researching her own family's Black heritage, which was for a significant part of her life spoken of as a rumor. One imagines a less conscientious actor audiences code as white casting herself as Clare. But such a choice wouldn't deny us the remarkable panoramic slideshow of emotions Negga sails through with the smallest shifts in her smile or the flitting unease around her eyes.

Thompson matches that with her own type of forceful muting in Irene's reactions, whether from John or the friends in Harlem who are taken by this shiny trinket of a woman and her enthusiasm to be in their presence for the most mundane activities.

Thompson's dramatic subtlety has a supportive partner in Hall's vision, which trusts the actor's fluency in conveying striking passion with few words.

Thompson is the main force honing each serrated exchange, never letting us forget that although Irene is the protagonist, she's far from perfect.

Her devotion to a fictional charity called the Negro League serves her need to establish a beachhead in Harlem society and provides her reputational window dressing. That would not be at odds with her employment of a darker-skinned housekeeper named Zulena (Ashley Ware Jenkins), save for the fact that she addresses her with the same imperiousness that a white woman would.

She may have firm footing in her world, but Thompson blares the character's insecurity through myriad taut twinges of muscles and shallow breaths. One of the movie's most striking scenes follows a fretting Irene from room to room during a party while never showing her face. Instead the camera holds on her hands clutching a porcelain teapot as if it were a life preserver instead, a visual monologue speaking volumes about Irene's twin concerns about Brian's wandering eye and her ability to maintain the façade of graceful bourgeois domesticity.

This is a gorgeously minimalist interpretation of a passage Larsen painstakingly describes over multiple pages, honorably streamlined by Hall without losing any power.

On the contrary, what she leaves out only accentuates subplots that take on a renewed relevance in 2021. Larsen's story encapsulates the illogical nature of race and America's refusal to properly reckon with it through two women sharing an attenuated bond to who they were and what they're allowed to be. Hall breathes life and light into it in a way that lends a weight of beauty and honesty to its immersion into a world of purposeful pretense.

"Passing" is now streaming on Netflix. Watch the trailer below via YouTube.