After Steve Bannon's indictment, congressional investigators have Trump's former chief of staff in their sights 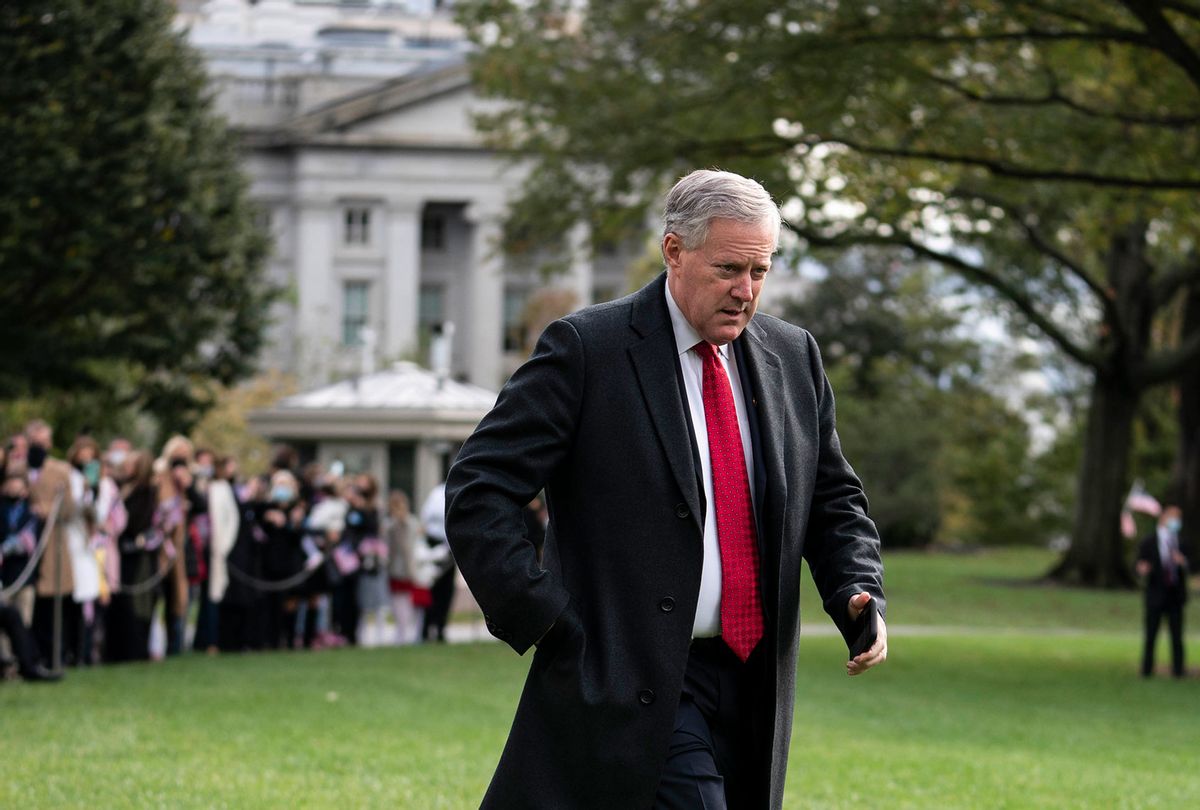 White House Chief of Staff Mark Meadows walks along the South Lawn before President Donald Trump departs from the White House on October 30, 2020 in Washington, DC. President Trump will travel to Michigan, Wisconsin and Minnesota for the campaign rallies ahead of the presidential election on Tuesday. (Sarah Silbiger/Getty Images)
--

The House committee investigating the Jan. 6 Capitol riot will "move quickly" to refer former White House chief of staff Mark Meadows to the Justice Department for criminal contempt charges after he refused to cooperate with the investigation, according to committee member Rep. Adam Schiff, D-Calif.

Meadows refused to appear for a deposition on Friday, citing Donald Trump's dubious claim of post-presidential executive privilege after President Biden refused to shield White House documents subpoenaed by the committee. Schiff told NBC News on Sunday that the panel plans to refer the former top Trump aide to the Justice Department for criminal contempt over his refusal to comply with a congressional subpoena.

"I'm confident we'll move very quickly with respect to Mr. Meadows also, but we want to make sure that we have the strongest possible case to present to the Justice Department and for the Justice Department to present to a grand jury," said Schiff, who also chairs the House Intelligence Committee. "But when ultimately witnesses decide, as Meadows has, that they're not even going to bother showing up, that they have that much contempt for the law, then it pretty much forces our hand, and we'll move quickly."

Meadows, who previously served in the House and chaired the far-right Freedom Caucus, had a very different view on congressional subpoenas when he was in Congress, criticizing the Justice Department and then-Deputy Attorney General Rod Rosenstein in 2018 for "stonewalling" House subpoenas aimed at discrediting former special counsel Robert Mueller's Russia probe.

"For nine months we've asked for documents. ... And what we found is not only have subpoenas been ignored, but information has been hidden. The efforts have been stonewalled," Meadows complained to Fox News host Laura Ingraham at the time. "It's all about transparency, so the American people can judge for themselves. They may be able to ignore Congress but they can't ignore the American people."

The House voted to refer former Trump strategist Steve Bannon to the DOJ last month. A federal grand jury on Friday charged Bannon with two counts of contempt for refusing to appear for a deposition and refusing to turn over documents. Each charge carries a minimum of 30 days and up to one year in jail if he is convicted. Bannon surrendered to the FBI on Monday, flanked by attorney David Schoen, who also represented Trump in his second impeachment trial. Bannon is scheduled to be arraigned later on Monday.

"I view this as an early test of whether our democracy was recovering. If our law is to mean anything, it has to be applied equally," Schiff told NBC News. "And so I'm very glad the Justice Department has moved forward in this fashion."

Meadows, like Bannon, has argued that his communications with Trump are privileged. His lawyer said Thursday that Biden "is the first President to make no effort whatsoever to protect presidential communications from being the subject of compelled testimony. Mr. Meadows remains under the instructions of former President Trump to respect longstanding principles of executive privilege. It now appears the courts will have to resolve this conflict."

White House deputy counsel Jonathan Su said in a letter to Meadows last week that while executive privilege is important, Biden would not "shield information reflecting an effort to subvert the Constitution itself."

"Consistent with President Biden's determination that an assertion of privilege is not justified with respect to testimony and documents relating to these particular subjects, he has determined that he will not assert executive privilege with respect to your client's deposition testimony on these subjects, or any documents your client may possess that bear on them," Su wrote. "For the same reasons underlying his decisions on executive privilege, President Biden has determined that he will not assert immunity to preclude your client from testifying before the Select Committee."

The committee is reviewing Meadows' role in the days before the Capitol riot and in Trump's efforts to pressure the Justice Department to help overturn his election loss. The committee has requested information related to Meadows' role in Trump's call to Georgia Secretary of State Brad Raffensperger pressuring him to "find" enough votes to overturn his loss and his communications with "organizers of the Jan. 6 events ... high-level officials at the Department of Justice about federal investigations into purported voter fraud, and U.S. government officials during the attack at the Capitol."

Meadows repeatedly tried to pressure the Justice Department to investigate Trump's voter fraud allegations, which have been roundly rejected by the courts. Before Jan. 6, Meadows sent former Vice President Mike Pence's top aide a memo written by Trump lawyer Jenna Ellis with a detailed plan for how Pence could block the certification of Biden's electoral victory, according to ABC News' Jon Karl's upcoming book "Betrayal." The memo claimed that Pence could disallow electoral votes from states Trump had lost narrowly, meaning that neither candidate would have a majority. If that happened, Ellis wrote, the election would be decided in the House of Representatives, where Republicans controlled the majority of state delegations.

Pence ultimately concluded that he did not have the power to block the results of the election before Trump sent a mob of his supporters to the Capitol on the afternoon of Jan. 6, where they attacked police officers and chanted, "Hang Mike Pence." Trump defended his supporters' threats in an interview with Karl.

"He could have — well, the people were very angry," Trump said. "If you know a vote is fraudulent, right, how can you pass on a fraudulent vote to Congress? How can you do that?"

Read more on the aftermath of the Capitol insurrection: