Hate to disappoint, but NYT documentary "Malfunction" won't gain #JusticeForJanet like the series did for Britney 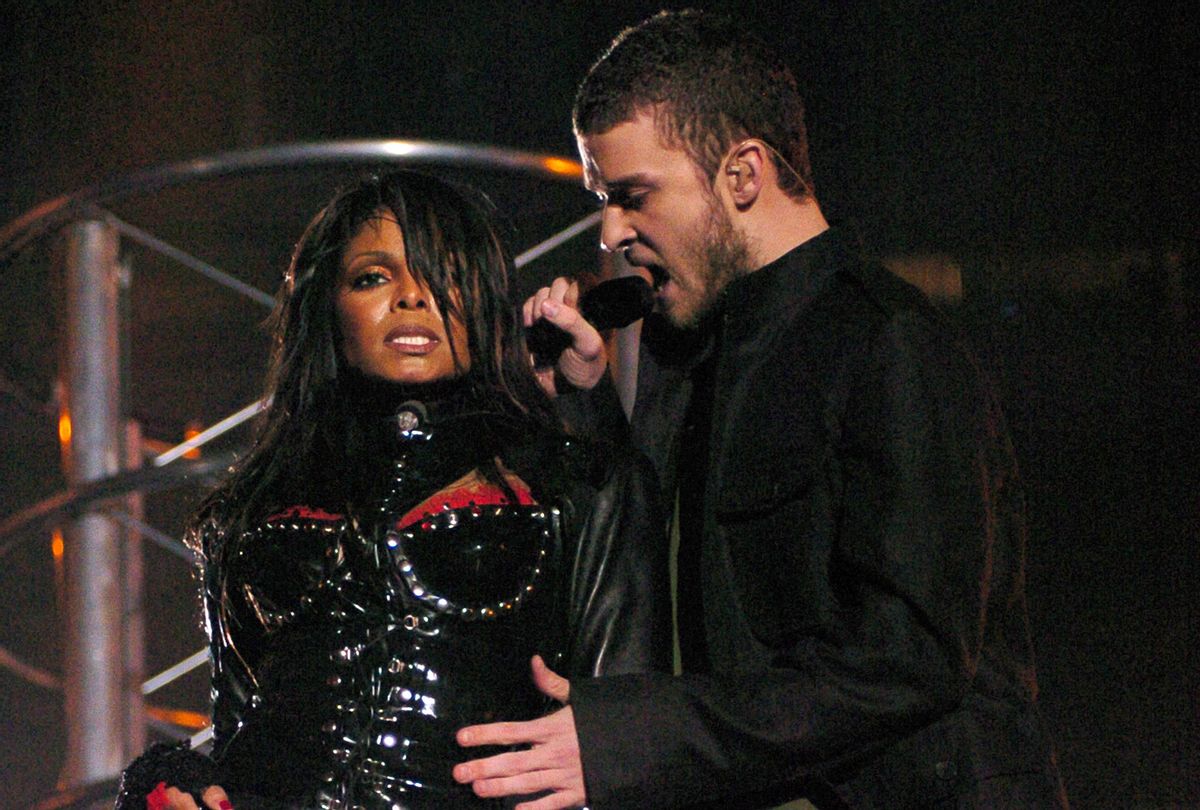 "Malfunction: The Dressing Down of Janet Jackson" comes before us shouldering the burden of unreasonable expectations. Black women can relate. Audiences of every stripe may be primed for it to match the quality and precision of previous "New York Times Presents" entries "Framing Britney Spears" and its follow-up "Controlling Britney Spears," which it does not.

Fans may be hoping it rekindles conversations surrounding the disproportionate level of disparagement Jackson faced in the wake of the Super Bowl XXXVIII halftime show debacle compared to Justin Timberlake, the man who committed a fumble with his co-star's breast on national TV.

Perhaps it does, but in a narrower capacity than what "Framed" inspired in its audience.

RELATED: As a teenager, I hated Britney Spears

It probably doesn't need to be said that Timberlake's image won't be substantially impacted by it either, although he capitalized on the publicity the incident generated by joking it away at first, only to throw Jackson under the bus as the politics heated up.

But enough with guessing of what level of business "Malfunction" might not do. What it shows us, what it leaves out and which important opportunities it misses are more concerning, all of which are why this hour disappoints more than it enlightens or activate the viewer.

If the purpose of "Malfunction" were to remind us that the 2004 Super Bowl Halftime Show, which was produced by MTV, was a terrible thing that happened to Jackson, we'd have few notes – mainly because we wouldn't care. That's how most people remember the incident almost 17 years later, as an event that generated an extreme overreaction and fueled thousands of cable news and tabloid takes that eventually died down.

At the time it felt like an areola bomb went off, showering the FCC with a record-making 540,000 complaints. CBS would be slapped with a whopping $550,000 indecency fine that was tossed out by a federal appeals court four years later. Sales of Jackson's 2004 release "Damita Jo" tanked.

The world moved on, and Timberlake moved up. Only recently have people begun to listen to those who have pointed out that the white pop singer did so at the expense of Jackson . . . and Spears.

But the title purports to do much more than simply memorialize that Halftime debacle, and plants its thesis in establishing the headline-generating "wardrobe malfunction" as the opportunity that conservatives were looking for to enact tighter censorship regulations on broadcast. Jackson, a Black superstar and member of a musical family dynasty led by her brother Michael, made a brilliant scapegoat.

She grew up in front of TV viewers on "Good Times" and "Fame," cemented as a wholesome figure before breaking free of her father Joe's management and publicly embracing her sexuality. Her 1986 album "Control" and its 1989 follow-up "Rhythm Nation 1814" blasted her profile into the stratosphere, making her one of America's biggest stars.

Jackson began starring in films and became MTV video royalty in the '90s and into the early Aughts, and she likely would have sustained some measure of her momentum if Timberlake hadn't exposed her breast for all of nine-sixteenths of a second.

"Malfunction" producer Jodi Gomes, who previously produced the 2009 miniseries "The Jacksons: A Family Dynasty," spends nearly half of the documentary's hour-plus runtime on her career as the walk-up to the moment colloquially known as "Nipplegate," presuming that viewers may not know Jackson biography as much as they should.

But all of that is widely available, along with her impressive music catalogue. What's missing, and what we should be hearing in this examination, is the subject's voice.

Jackson and Timberlake both declined to be interviewed (and happen to share the same publicist), which is typical for a project like this. Spears didn't appear in the FX/New York Times documentaries about her either. Nevertheless, there was a sense that someone was representing Spears' point of view, other than the journalists called upon to analyze the significance of the incident.

Jackson has no such champion, but plenty of parties ready to heap the blame upon her yet again, including several network executives in charge of producing the halftime show or, heaven help us, Parents Television and Media Council President Tim Winter, who hyperbolically opens the hour with "If the culture wars could have a 9/11, it's February 1st, 2004."

No casualties were suffered in unintentional baring of Jackson's nipple. Thinking back on it, most people really had to rewind their VCRs and freeze the moment to catch a blurry sight of it. Even with that effort, the detail was obscured by the jewelry she had on.

Nevertheless, former MTV senior vice president Salli Frattini weighs in about her hurt feelings at length, while the person whose career endured the more grievous harm is absent.

And it's simply amazing that Frattini airs her instincts that "there was a private conversation between wardrobe, stylist and artist where someone thought this would be a good idea, and it backfired," without any comment from Jackson's stylist to refute or shed light on this.

Wayne Scot Lukas, the former "What Not to Wear" host who styled Jackson's Super Bowl fashions, isn't particularly difficult to find. He has weighed in on the event quite recently on Page Six, although his account of who was responsible for the stunt was subsequently contradicted by Timberlake's team.

Even if Gomes and the NYT production team didn't use his allegation, certainly Lukas or anyone else who was close to Jackson could have offered some insight on what happened or respond to the multiple insinuations that she didn't apologize quickly enough or, simply, enough.

Ultimately "Malfunction" swings around to pointing out the misogynistic and racial implications of Timberlake's rise at Jackson's expense, while also pointing the finger at former CBS top exec Les Moonves' vindictiveness to explain Jackson's blacklisting.

But that doesn't tell us much we don't already know. Moonves' reputation as a predator who ruined women's careers is established, but by the time he was ousted from CBS he'd still amassed a multimillion dollar fortune. Timberlake went on to become a movie star and hit-maker who was even invited back to the Super Bowl in 2018 as its headliner.

One white man helped crush this Black woman's reputation and another launched off of her pain. If you take issue with that observation, remember that a third, Kid Rock, desecrated the American flag in that same Super Bowl performance. He went on to receive an invitation to the White House.

"Malfunction" incorporates analysis of the bigotry and misogynoir at play here, mainly relying on journalists Jenna Wortham and Toure to cover that angle using the broadest of references to the history dehumanization of Black bodies. They're right about that, but this also speaks to an aspect of Jackson's story that remains frustratingly unconsidered here and evokes what is presently playing out in our political landscape.

Black women tend to be the canaries in the coal mine of liberty and its rollbacks, and the punishments the right persuades the mainstream to inflict on Black women boomerang back on everyone, white people included.

We see this with the right-wing smear campaign against Nikole Hannah-Jones and the efforts to ban her Pulitzer Prize-winning work "The 1619 Project."  We're watching it happen with the recon of Toni Morrison's legacy, especially her novel "Beloved."

"Malfunction" only mentions in passing that after all the jokes died down, the first major casualty of the decency squads was none other than Howard Stern. What happened to Jackson is terrible, meaningful to her fans and familiar to Black women. But the broader audience doesn't have a history of caring about one Black woman's problems until the forces that destroy her splash back on a white person they like.

This doesn't apply to Timberlake, mind you, who apologized to Jackson and Spears in February after "Framing Britney Spears" took off and his past behavior came back to haunt him. " . . . I care for and respect these women and I know I failed," he states in an Instagram post. "I also feel compelled to respond, in part, because everyone involved deserves better and most importantly, because this is a larger conversation that I wholeheartedly want to be part of and grow from."

He will get that opportunity because that's how America works. All he has to do is retreat from the spotlight and wait for our recurring bout of amnesia to kick in.

But Jackson's absence from the spotlight is finally ending, as it should have years ago. We've long since embraced her inheritors, among the foremost being Lizzo, Cardi B, Megan Thee Stallion and Beyoncé.

Since her 2019 induction into the Rock and Roll Hall of Fame she's been building the process of reclaiming her rightful place in the pop firmament. People haven't forgot Jackson, after all. But they may share Wortham's bewilderment. "I still don't understand how hard they came for Janet," she says.

Watching "Malfunction" doesn't change that, but maybe the two-part, four-hour documentary Jackson is making for A&E and Lifetime will. That debuts in January 2022.

The New York Times Presents "Malfunction: The Dressing Down of Janet Jackson" is now streaming on FX on Hulu.