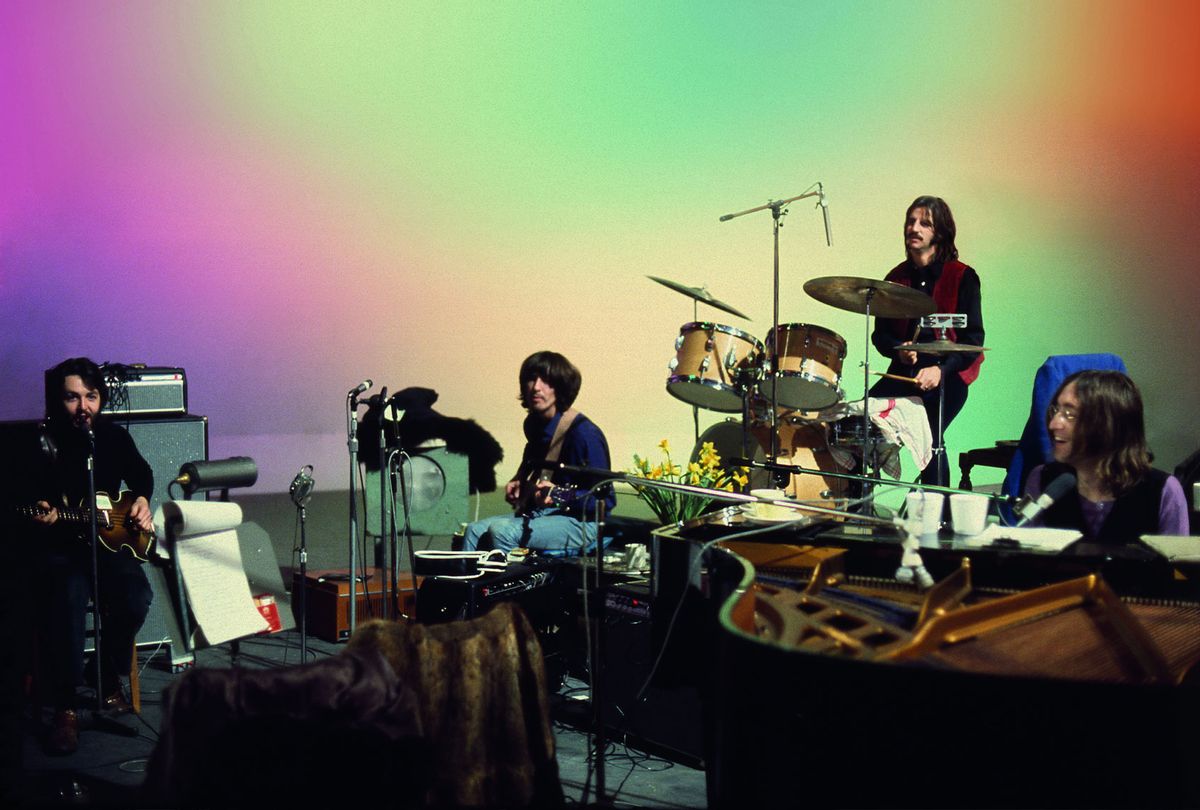 Peter Jackson's "The Beatles: Get Back" is a mesmerizing feast for the eyes, a veritable time machine that transports viewers back to the Beatles' heyday in January 1969. New fans and diehards alike will revel in the carefully restored images of the Fab Four as they bring such classic tunes as "Get Back," "Don't Let Me Down," and "Let It Be" to life in the studio, culminating in the famous Rooftop Concert.

In its finest moments, "Get Back" creates the illusion of experiencing the Beatles working in real time as they undertake a follow-up project to "The Beatles (The White Album)," which had been released in November 1968 and was currently lording over the world's record charts. While most groups might have been content to take a well-earned break after spending nearly six months in the studio on their most recent LP, the Beatles reconvened on the morning of January 2, 1969, at a cold and cavernous Twickenham soundstage in West London.

Working with Michael Lindsay-Hogg, who had recently helmed the Beatles' video shoot for "Hey Jude" and "Revolution," the group had tasked the American director with documenting their rehearsals for what would have been their first concert appearance since August 1966 at San Francisco's Candlestick Park.

As Jackson's three-part docuseries makes clear from the outset, the Beatles had set themselves up for an especially daunting challenge, particularly given drummer Ringo Starr's upcoming role in "The Magic Christian" film, which was set to begin principal photography in early February. In addition, coming up with a spate of new songs on the heels of "The White Album" would be no easy feat. John Lennon was especially tapped out when it came to fresh material, and George Harrison was encountering the usual frustrations when it came to debuting his wares for Lennon and Paul McCartney, the Beatles' much ballyhooed songwriters.

RELATED: The definitive version of the Beatles' "Let It Be" doesn't exist – but this new deluxe remix sizzles

When it comes to Harrison's abrupt decision to quit the band on Jan. 10, Jackson's documentary doesn't pull any punches, devoting considerable screen time to the bandmates' doldrums as they ponder how to proceed in their lead guitarist's absence. When he returns to the fold, Harrison demands that they scrap the idea of working at Twickenham and relocate instead to the friendlier confines of the basement studio at their Savile Row office building.

At this juncture, Jackson skillfully depicts the Beatles, Lindsay-Hogg, and their crew as they race against the clock, hoping to salvage something from that previously misbegotten month. What transpires on screen over the final two episodes amounts to the greatest come-from-behind victory in rock 'n' roll history. Working at Apple Studios on Jan. 21, the bandmates spend the next ten days knocking one song after another into shape, even going so far as to gird their courage and take to the roof for their final, thrilling lunchtime concert.

Jackson sagely peoples the docuseries with attention to the large swath of folks who made the Beatles tick, including girlfriends Yoko Ono and Linda Eastman, Linda's daughter Heather, who at times nearly steals the show when she visits the studio, producer George Martin, engineer Glyn Johns, and loyal roadie Mal Evans, among others. In staging Get Back, Jackson makes excellent use of Lindsay-Hogg, who acts as a secondary narrator of sorts, chewing on his ever-present stogie and marching through Twickenham and Apple studios as he tries valiantly to rally his beleaguered Beatle troops into action.

Simply put, "Get Back" is nothing short of a Thanksgiving holiday miracle. As the series unfolds from dreary Twickenham to the eminently more convivial Savile Row, we observe the Beatles crafting new songs before our very eyes. It makes for a transfixing experience, indeed.

"The Beatles: Get Back" docuseries releases a new episode each day, Thursday-Saturday, Nov. 25-27 on Disney+. Watch a trailer for it below, via YouTube.

Disney Plus Get Back Peter Jackson Review The Beatles Tv