From President Meryl Streep to an adorable pufferfish, here's what's new on Netflix this December

'Tis the season for queer holiday rom-coms, international adventures and the inevitable return of “Emily in Paris" 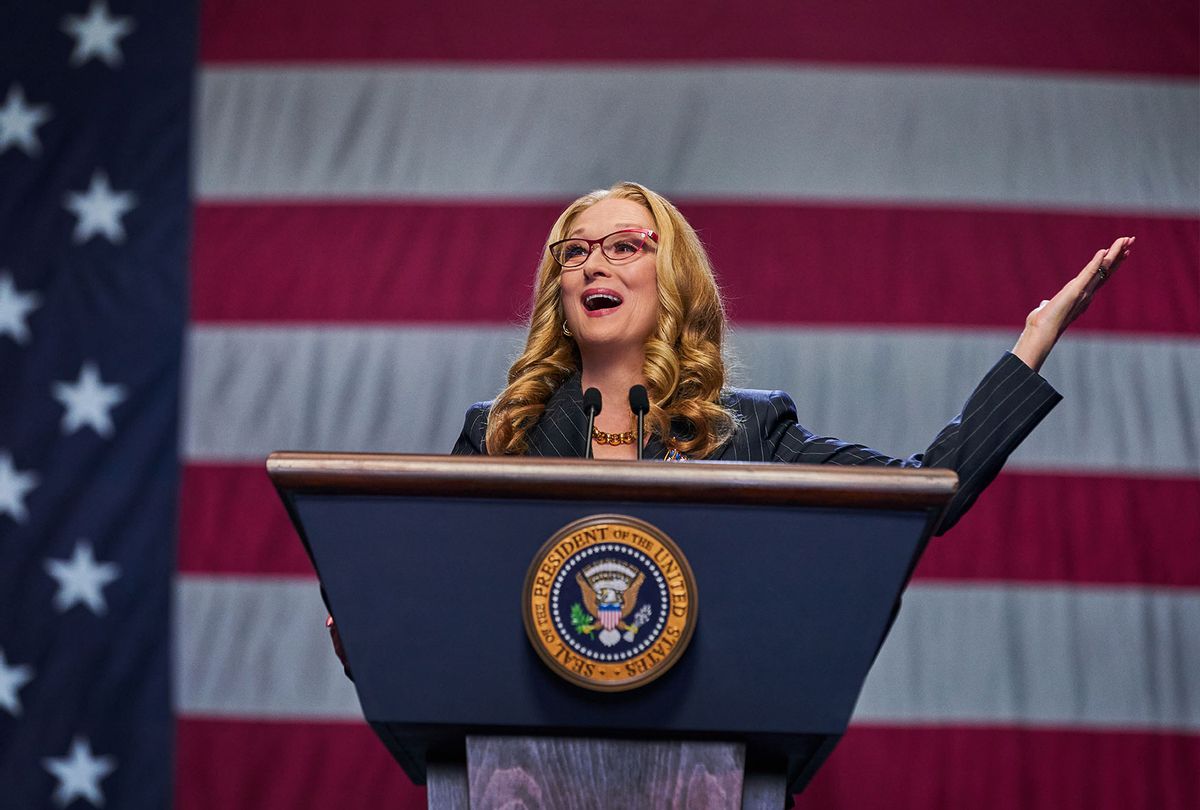 Cue the sleigh bells and hang low the mistletoe because the Netflix holiday season is upon us, brought to you by a bunch of Jennifers. The streaming platform welcomes Jennifer Lawrence back to the big screen as an astronomer, plus Jennifer Coolidge and Jennifer Robertson ("Schitt's Creek," "Ginny and Georgia") engage in some Christmas hijinks.

If actresses named Jennifer don't strike your fancy, then fret not for there are plenty more seasonal entertainments to enjoy. For lovers of festive baking paired with jolly good competition, be sure to tune in for the return of "The Great British Baking Show: Holidays." The popular international series, "How To Ruin Christmas," returns for more laugh-out-loud adventures with Tumi and her eccentric family. And animated family specials, like "Shaun the Sheep: The Flight Before Christmas" and "StarBeam: Beaming in the New Year," will keep the kiddies entertained.

RELATED: "The Great British Baking Show" was a showwstopper, redeemed this season by fantastic contestants

December is also a big month for documentaries. "Voir" — a docuseries from "Fight Club" director David Fincher — explores the most influential films in history and the beauty of cinema with collections of visual essays. "Stories of a Generation – with Pope Francis" is a heartwarming assemblage of personal and life stories from elderly women and men all over the world.

As for what to catch before the end of the year, "Titanic," "Charlie's Angels" (2000), the first season of "Fullmetal Alchemist" and "Zodiac" are just a few fan-favorite titles that are getting ready to bid adieu.

Here are highlights of what's coming:

Jane Campion's adaptation of Thomas Savage's 1967 Western novel examines toxic masculinity and latent homosexuality through the rocky relationship between brothers Phil (Benedict Cumberbatch) and George (Jesse Plemons). Conflict soon reaches its peak after George invites his new wife (Kirsten Dunst) and her son (Kodi Smit-McPhee) to live with him and Phil in their shared ranch home. Read Salon's review of the breathtaking film.

Michael Urie stars as Peter, an everlasting bachelor who desperately looks for a date to accompany him home during the holidays. He ultimately convinces his roommate and best friend Nick (Philemon Chambers) to tag along. Despite their platonic relationship, the pair soon question their feelings for each other after a little encouragement from Peter's wacky but well-meaning family members. Jennifer Coolidge, Kathy Najimy, Barry Bostwick and Jennifer Robertson co-star.

In her hour-long comedy special, Nicole Byer reminisces over all the craziness spurred by a pandemic-plagued year-plus and jokes about everything from her ideal type to her ambiguous veganism. Filmed at the Gramercy Theatre in New York City.

Based on the 2009 British miniseries "Unforgiven," Netflix's latest gritty drama centers around Ruth Slater (Sandra Bullock), an ex-convict who strives to abandon her murderous past and reconnect with the younger sister she was forced to leave behind. The film also stars Vincent D'Onofrio, Viola Davis and Jon Bernthal.

Following the success of Netflix's Academy Award-winning documentary, "My Octopus Teacher," comes another aquatic masterpiece that now shines the spotlight on a tiny sharpnose pufferfish — aptly named Puff. Rose Byrne narrates baby Puff's escapades as he tries to find his place within the convoluted world of Australia's Great Barrier Reef.

After various COVID delays and an injury, we can finally return to the Continent to resume the fantastical adventures of Geralt of Rivia (Henry Cavill) and Princess Ciri (Freya Allan) as they figure out what it means to be linked by destiny. Plus, we'll find out where Yennefer (Anya Chalotra) disappeared to as the world is embroiled in war, magic and mayhem.

The ongoing pandemic — hello omicron variant — has become a central dilemma in our daily lives and a hot topic amongst comedy shows. In his latest special, Jim Gaffigan quips about marching bands, billionaires — notably ones in space — and the s**tshow that is 2021. Heat up your hot pockets and enjoy!

In Adam McKay's sci-fi comedy (co-written by former Salon contributor David Sirota) — which satirizes the climate change crisis — the world is at risk of being destroyed by a giant comet hurtling toward Earth. Two lowly astronomers (Leonardo DiCaprio, Jennifer Lawrence) attempt to warn the greater public about the incoming danger but instead, are met with indifference from the president (Meryl Streep in a deliciously hammy role), her Chief of Staff/son (Jonah Hill) and the general public. Rob Morgan, Cate Blanchett, Mark Rylance, Tyler Perry, Timothée Chalamet, Ariana Grande, Ron Pearlman, Scott Mescudie and more star in a satire about the subsequent perils of not heeding science.

Netflix's true crime series continues with a three-episode season on the vile New York City murders carried out by Richard Cottingham, a.k.a The Torso Killer. The docuseries examines the faults of both social and systemic forces, which helped fuel Cottingham's unsettling plunge into the city's lawless neighborhoods during the late 1970s and early '80s.

Maggie Gyllenhaal makes her directorial debut with the psychological thriller, based on Elena Ferrante's novel of the same name, that challenges commonplace ideas regarding motherhood. Olivia Colman ("The Crown") stars as Leda Caruso, a woman on holiday who becomes obsessed with and Nina (Dakota Johnson) and her daughter. The film received a four-minute standing ovation after its premiere at the Venice Film Festival and cleaned up at the recent Gotham Film Awards.

The Fab Five — Bobby Berk, Tan France, Antoni Porowski, Jonathan Van Ness, and Karamo Brown — are back, now in Austin, Texas. Together, they tackle a new round of makeovers while adorned in a yee-haw wardrobe filled with cowboy hats, boots, belts and . . . saddles?!

Dec. 9
"Asakusa Kid"
"Bathtubs Over Broadway"
"Bonus Family" Season 4
"The Family That Sings Together: The Camargos"

Dec. 10
"Anonymously Yours"
"Aranyak"
"Back to the Outback"
"How To Ruin Christmas: The Funeral"
"Twentysomethings: Austin"
"Saturday Morning All Star Hits!"
"The Shack"
"Still Out of My League"
"Two"