Despite a steely performance, Sandra Bullock's dreary film of life after prison is "Unforgivable"

Adapted from a British miniseries, the Netflix drama follows a woman who killed a cop & is released 20 years later 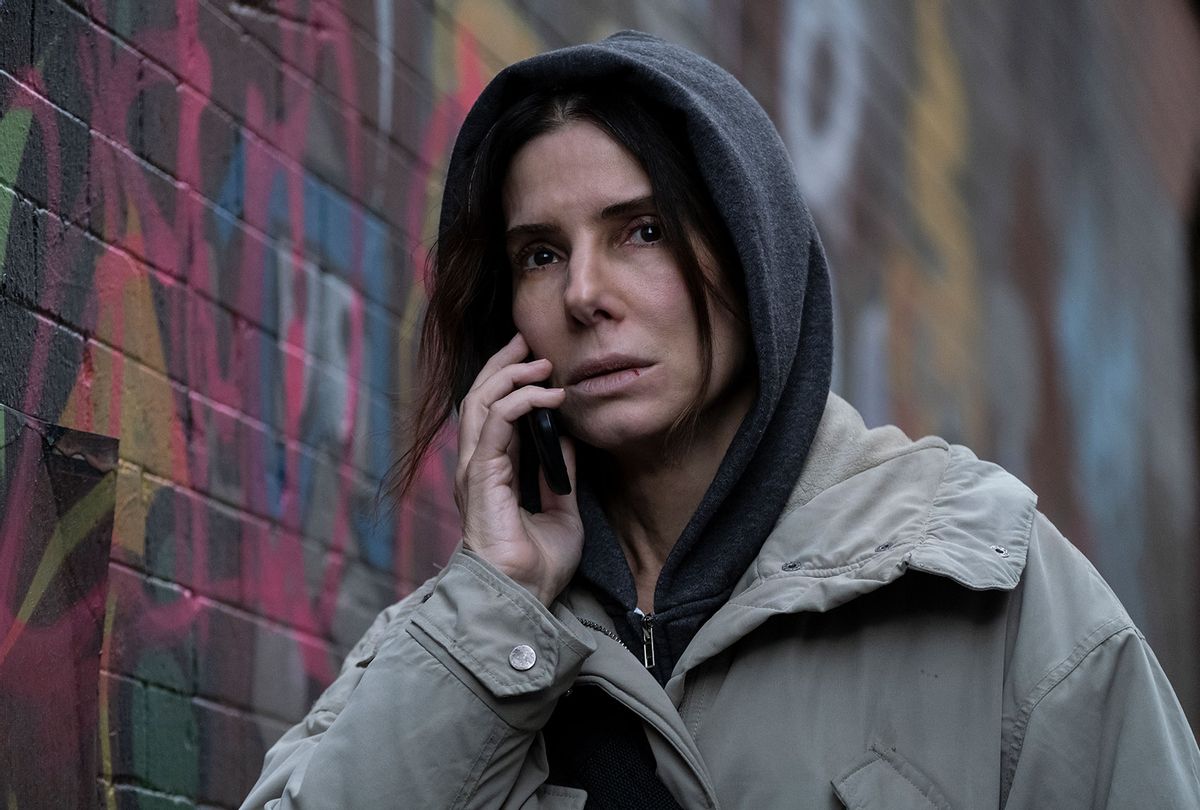 "The Unforgivable" is Netflix's dreadful and dreary melodrama about Ruth Slater (Sandra Bullock), a convicted cop killer, who is released from prison after serving 20 years. Ruth is as gray as the jacket she wears, and her hard expression belies her relentless mission — she only wants to find the younger sister she left behind when she was incarcerated.

The film, a remake of Sally Wainwright's 2009 British miniseries, "Unforgiven," is certainly of interest for addressing issues of trauma, loss, and redemption, but director Nora Fingscheidt sabotages the performances and waters down the impact of the story by overly complicating the multiple narrative strands.

The direction is clumsy from the opening moments as Ruth is seen reentering society. The film intercuts flashbacks while also showing Ruth's (now adult) sister, Katherine (Aisling Franciosi) getting into a car accident. It is so poorly edited that one could think Ruth hit and killed Katherine, which is why she went to jail. But that is not the case. Moreover, given that Katherine is said to have been five when Ruth was incarcerated for 20 years, she should be at least 25 now, but Katherine appears to still be a teenager living with her overprotective adoptive parents, Michael (Richard Thomas) and Rachel (Linda Emond). This is the least of the film's many problems.

RELATED: "The Matrix" producers offered Neo to Sandra Bullock and were willing to gender flip the role

Ruth is dropped off at a halfway house in the Chinatown section of Seattle by her kindly parole officer, Vince (Rob Morgan) and tries to get a job in carpentry. (Cue "rebuilding" metaphor!) She ends up working at a fish factory where she meets Blake (Jon Bernthal) who takes an interest in her. She also visits the house where the murder she was convicted for occurred. It is now owned by John (Vincent D'Onofrio), who, conveniently, is a lawyer, and his wife, Liz (Viola Davis). Ruth hopes John can help her navigate the system to reconnect with Katherine. Meanwhile, Steve (Will Pullen) and Keith (Tom Guiry), the two sons of the cop Ruth killed, plan to exact revenge on Ruth when they learn she has been released for good behavior.

These interconnecting storylines rise and converge, but they generate more unintentional laughs than suspense or emotion. There are scenes that border on the ridiculous such as an outburst Ruth has when she meets Katherine's adoptive parents in John's office. One over-the-top scene has a frustrated Ruth wrecking the workspace where she found a part-time carpentry job. Moreover, there are coincidences galore, and a silly, unnecessary romantic triangle involving Steve, Keith, and Keith's wife, Hannah (Jessica McLeod).

Fingscheidt simply cannot find the right tone for the film. A scene where Blake surprises Ruth at her carpentry job uses dramatic music to build suspense as Ruth carries a large weapon to confront the mystery intruder. This red herring is as hollow as another sequence involving a coworker at the fishery who beats Ruth up and threatens her when she finds out about the ex-con's crime. Even an exchange Ruth has with Keith, who worms his way into Ruth's workspace to fish for information, should crackle with tension, but it feels slack.

Ruth's efforts to be treated with compassion having served her time is one of the more interesting aspects of "The Unforgivable," but this idea gets raised and largely ignored. Another sticky question the film raises involves whether Katherine should know the truth about her sister. Katherine tells Emily (Emma Nelson) — Michael and Rachel's biological teenage daughter — that she does not want to know about her past, despite her persistent nightmares and lack of knowledge about "what happened." (Katherine is also not taking her meds.) Katherine's choice not to confront her trauma prompts the plucky Emily to investigate. She learns about Ruth's interest in contacting Katherine and reads all the letters Ruth sent (without being discovered, of course). When Emily secretly reaches out to Ruth and arranges to meet with her, it leads to an over-the-top climax that involves Keith targeting Emily — whom he thinks is Katherine — to get back at Ruth. It also leads to a "surprise" revelation that plays into Ruth's bid for redemption. Alas, all this feels far more contrived than satisfying.

The deglamorized Bullock is all steeliness in what is, arguably, an Oscar-baiting performance. One of her best moments has her admitting her criminal past to Blake over breakfast. Bullock confesses in a thin voice and, stunned by Blake's reaction, leaves the restaurant. However, Fingscheidt includes clunky flashbacks that trigger Ruth's emotions — e.g., pancakes being served to young Katherine — that are meant to create depth and add meaning that is revealed later, but such tactics backfire. They destroy a potent moment that uses silence to convey Ruth's despair.

The supporting cast is not given much to do, but that may be because their characters are so thinly drawn. Vincent D'Onofrio and Viola Davis are wasted in their weak roles. John and Liz each mistrust Ruth only to turn on a dime and help Ruth after some simple pleading. Richard Thomas and Linda Emond play concerned parents well, but they are merely puppets in the narrative. Will Pullen and Tom Guiry portray Steve and Keith as idiots, rather than menacing young men out for retribution, which is a drawback. Emma Nelson only registers because Emily figures into the plot more than Katherine does. Aisling Franciosi plays the piano more than she does a character. At least Jon Bernthal and Rob Morgan provide some flintiness during their all-to-brief screentime.

Despite Bullock's noble efforts to play against type, "The Unforgivable" is largely forgettable.

"The Unforgivable" is now available to stream on Netflix. Watch a trailer for it below, via YouTube.