This was the year of not watching any Oscar bait ... but hey, at least "Eurovision" was fun

Even for dedicated cinephiles, this year's Oscar race feels like a story we all sat out 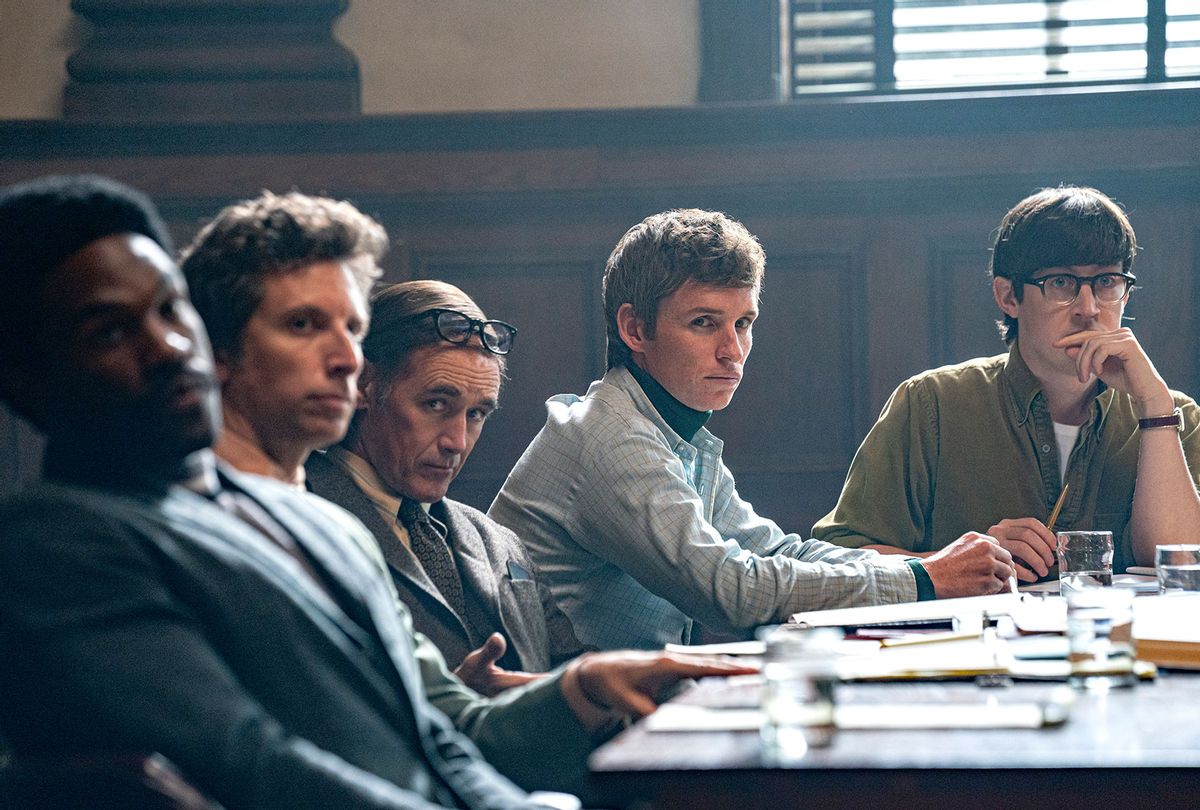 The Trial of the Chicago 7 (NICO TAVERNISE/NETFLIX)
--

How many of this year's Oscar nominees have you seen? How did Monday morning's announcement of the contenders stack up with your personal likes and dislikes? I'm asking because I have literally no idea about any of these films. I can, however, engage you in a spirited conversation about murder podcasts and old episodes of "The Mindy Project" if you'd like. Because 2020 was the year I forgot about film.

I can't remember ever not being in love with the movies. Three-hour-long French movies about nothingness, Phillip Glass-scored documentaries, Adam Sandler's peak '90s-era character work — my romance with cinema was boundless and unconditional. I went to film school, where I learned words like "auteur" and "mise en scene." Early in my career, I worked for a film studio. I met my spouse in the lobby of a movie theater, where we struck up a conversation about the screening I was leaving and he was going in to. I named my firstborn after the heroine of a movie based on a book I had not yet read. The day I was diagnosed with cancer, I immediately got on the subway and went to see a Will Ferrell flick. I generally consider the month of December not "Christmas shopping season" or "Hallmark Channel season" but "limited release for Oscar qualification" season. At least, I used to. Now I'm at best a "horny people competing to date each other TV show" kind of person.

My 2020 started cinematically strong. One year ago, I was being charmed by director Autumn de Wilde's vibrant, sexy re-imagining of the Jane Austen classic "Emma." I was gasping at Elisabeth Moss's jagged performance in the smart, spooky "Invisible Man." I was sitting at a packed screening of "Birds of Prey" and championing what I referred to at the time as director Cathy Yan's "feminine mayhem." I was talking to director Eliza Hitman about her brilliant, bleak "Never Rarely Sometimes Always" while we sat in the back of a car chugging through midtown Manhattan traffic. That was the last movie I saw in a theater. It was the last time I sat, maskless and close, next to anyone outside of my immediate family.

The pandemic fundamentally changed the cinematic experience. It changed how we watch movies, and it changed, for many of us, what we want to watch. As theaters are slowly re-opening — the ones that haven't shuttered permanently, anyway — it's too soon yet to tell how much the physical space, the actual darkened room you pay to enter, matters much any more. But I'm encouraged that movies themselves survived the last grim 12 months, and that this year's Oscar nominees reflect a groundbreaking array of voices and talents, even if my own cultural appetite took a hard blow.

Yet in a year in which seeing first-run movies was the only thing that did not become exponentially harder, movies overnight seemed to lose their appeal to me. Where just a short time prior I might have been able to form coherent thoughts about inspirational WWII dramas, my interest dried up like the toilet paper supply at my supermarket. Is it a 10-minute tutorial on making soup? Then no. I mustered up the energy for "Eurovision" and pretty much flatlined there. I have not seen a single one of the main nominated films.

In what Variety understatedly has referred to as "an unconventional year," in 2020 the North American box office plunged 80% from 2019. The drop reflected both the obvious decline in movie-going overall, and the postponement of blockbuster hopefuls like "Ghostbusters: Afterlife," "In the Heights" and "No Time to Die." Yet perhaps it also speaks to an ennui I doubt I am alone in experiencing.

My whole life, movies havebeen  my escape, my refuge, my educator. I can associate nearly every close relationship I've ever had in my life with the movies we held hands to, argued over, cried at, walked out of, fell asleep to. There has never been any sadness that a good movie couldn't temporarily alleviate, no personal experience I couldn't find cathartic cinematic release through. This last year was the thing I couldn't shut off, couldn't detach from, even temporarily. No far reaches of the galaxy or haunted houses in which to hide. Certainly no theaters in which to go on airplane mode for two beautiful, undisturbed hours.

I miss the movies and I miss being a movies person. I miss defining myself by the films I love and the ones I hotly despise. I miss caring about great art. I miss caring about old Adam Sandler comedies. The past year drained it all out of me, left me with necessary obsessions about laundry room sign-up times and distance learning and sick parents and what to make, again, for dinner. My Maslov's pyramid of needs collapsed upon itself.

But movies have taught me about second chances, and falling in love again. They've taught me about unexpected twists, and keeping one's sense of humor in spite of it all. And seeing the list of Oscar nominees on Monday, I felt a stirring of wistful longing and curiosity in a place that's been dormant. Movies. Right. I used to live for those things. And for the first time in a long time, I believed I might yet again. I remembered that things can and do change. Because the movies taught me that while not every story has a happy ending, absolutely anything is always possible.