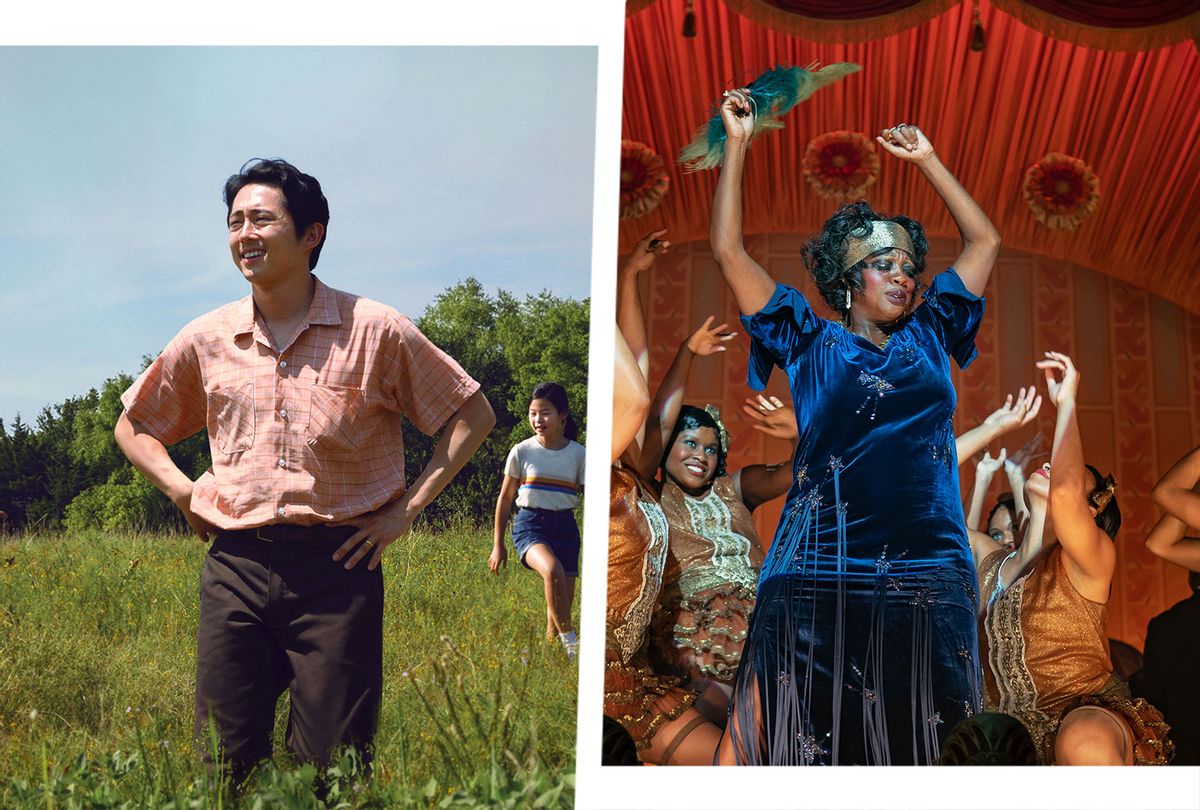 On Monday morning, the Academy of Motion Picture Arts and Sciences announced their 2021 Oscar nominations. In a year of really strong feature films, from "Judas and the Black Messiah" to "Promising Young Woman," some of these Academy Award nods were expected. But the nominations also revealed several historic breakthroughs for actors and filmmakers of color — a welcome development in the wake of the 2015 #OscarsSoWhite controversy — alongside some unexpected snubs.

Here are the biggest takeaways from this year's nominations:

The year's most nominations went to "Mank"

Rounding out the Best Picture nominations are "The Father," "Judas and the Black Messiah," ''Minari, "Nomadland," "Promising Young Woman," "Sound of Metal" and "The Trial of the Chicago 7."

After the Golden Globes controversy, "Minari" finally gets the attention it deserves

As Salon reported in February, the Golden Globes' decision to classify "Minari," Lee Isaac Chung's semi-autobiographical film following a Korean American family relocating from California to Arkansas in the 1980s as a "foreign language film" created controversy and a significant amount of backlash. Its actors were also snubbed in their respective categories.

"Minari'' is very much an American film  — one was created, produced and bankrolled by Americans — though the Hollywood Foreign Press Association, the voting body behind the Globes, justified their decision to exclude it from the best motion picture, drama category because "Minari" is predominantly a Korean-language film and to be considered for the more prestigious category, film dialogue must be at least 50% English. However, in the past, films including "Babel" (winner, 2006 best motion picture, drama) and "Inglourious Basterds" (nominee, 2009 best motion picture, drama) did make it into the Globes' best picture category despite this stipulation.

This has led many in the industry to call for an examination of how the HFPA's rules are applied and, on a larger scale, how American filmgoers and critics categorize "foreignness" in a country that is fundamentally built on the immigrant experience.

The best picture category is competitive this year, stocked with films like "Minari," "Promising Young Woman," "Judas and the Black Messiah," "Mank," "Sound of Metal," "The Father," "The Trial of the Chicago 7" and "Nomadland."

Conspicuously missing from the nominee list, however, was "Ma Rainey's Black Bottom," the Netflix film starring Viola Davis and Chadwick Boseman, based on August Wilson's play.

Set in 1927 Chicago, tensions rise when the trailblazing Mother of the Blues, Ma Rainey (Davis), and her band gather at their recording studio. There, her ambitious trumpeter, Levee (Boseman in his final posthumous role), wants to launch his own career by modernizing Ma's old-fashioned music.

The film was critically acclaimed, and Boseman and Davis both received nods for their performances, leading some cinephiles to wonder why it, as well as two other Black-led films, "One Night in Miami" and "Da 5 Bloods," were excluded from the best picture nominations, especially since up to 10 films are permitted to be nominated and the academy only nominated eight.

While it's disappointing that "Ma Rainey's Black Bottom" wasn't nominated in the best picture category, Viola Davis was nominated for best actress for her role as Ma Rainey, officially making her the most-nominated Black actress in history. She has received four nominations so far in her career: supporting actress nods for "Doubt" and "Fences," and best actress nominations for "The Help" and now "Ma Rainey's Black Bottom." Davis won the 2017 Oscar for her performance in "Fences."

Andra Day — who played Billie Holiday in "The People vs. Billie Holiday" — also received a best actress nod, making this year's Oscars only the second time in Academy Award history for two Black women to compete in the category in the same year.

In a February interview with Variety, Davis said that while she was excited by the prospect of becoming the most-nominated Black actress in Oscars history, it also reflected the lack of opportunities people of color have had in the business.

"If me, going back to the Oscars four times in 2021, makes me the most nominated Black actress in history, that's a testament to the sheer lack of material there has been out there for artists of color," she said.

As Salon's D. Watkins wrote, "'Judas and the Black Messiah' stars Daniel Kaluuya and LaKeith Stanfield and tells the story of Fred Hampton (Kaluuya), a young, brilliant revolutionary who unites Black activists, gang members and working-class whites with the purpose of fighting for justice, freedom, and liberation for all in the 1960s." He was targeted by the FBI, who used Bill O'Neal (Stanfield) to infiltrate the Black Panther Party and gather intelligence on Hampton.

Typically, when two men or women co-lead a film, one is positioned as the definitive lead during awards season so that both actors have a shot at garnering respective nominations in the best and supporting categories.

In the case of "Judas and the Black Messiah," Stanfield had been positioned as the lead; Kaluuya has already received a Golden Globe win and a BAFTA nomination for best supporting actor for his performance.

However, for the Oscars, Stanfield and Kaluuya are both nominated for best supporting actor for their roles, leaving viewers to contemplate who the star of the film was. And for fans of both actors and the film, seeing both actors nominated in the same category isn't necessarily cause for celebration. When two performers are nominated in the same category for the same film, they can end up splitting the vote and tipping the balance to another film's nominee.

This year's Best Director category was historic for several reasons

For the first Oscars year in history, two women directors are up for best director. Chloé Zhao is nominated for her work on "Nomadland," while Emerald Fennell received a nod for "Promising Young Woman." Both films are also up for best picture. Zhao is also the first Chinese woman and the first woman of color to be nominated for the category.

Prior to Monday, only five women have ever been nominated for best director; and only one, "The Hurt Locker" director Kathryn Bigelow, has ever won the award. The other four to earn a nomination were Lina Wertmuller ("Seven Beauties"), Jane Campion ("The Piano"), Sofia Coppola ("Lost in Translation") and Greta Gerwig ("Lady Bird").

Lee Isaac Chung ("Minari"), David Fincher ("Mank") and Thomas Vinterberg ("Another Round") round out the 2021 best director nominations.

Here's the complete list of nominations for the 2021 Oscars.

The 93rd annual Academy Awards are scheduled to air live on ABC on Sunday, April 25, from multiple locations, including the Dolby Theatre.